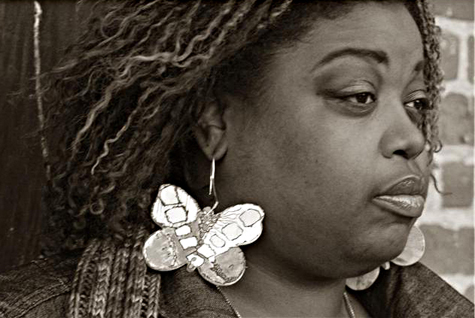 Clever, inventive and undeniably expressive, Cleo Cartel is a vocal, visual and creative artist with passion and conviction. It is an ordinary Sunday, full of sunshine, and Cartel is casually sitting in her salon where she joyfully braids culture and conversation into people’s hair. All around are vivid impressions that she recently designed. There are samples of hand-crafted, one-of-a-kind jewelry, a unique mixture of carefully made, brightly colored, poetically inscribed, wooden and stone earrings, bracelets and necklaces. Paintings with vibrant hues, full of people, scenes and meaningful images from Cartel’s mind enlighten the atmosphere. In a laid-back and relaxed demeanor, her voice warm and welcoming, she begins smiling and freely shares her joy of creating and tells the story of family, community and culture that inspired her confidence to choose art.

“I’ve never been scared to follow my first mind,” she says, “Art is what makes me feel good.” Born and raised in Oakland, Calif., amid an entirety of rich cultures, Cartel recalls, “We were immersed in art as kids.” Growing up part of an African-American, Latino and Asian community, Cartel felt, “There were no barriers to where you could go, what you could see, do and learn.” Her mom would take her around shopping and running errands, Cartel would observe all the different people, notice their different styles and absorb their art and cultural. Cartel specifically remembers one woman who owned her own business and was an innovative dresser. She stood out because of the clothes and culturally unique jewelry she wore. Cartel also thinks back to the Festival at the Lake, a local event where she observed people selling their own arts, goods and crafts. These were meaningful experiences because they served as early examples of “people like me, from where I’m from, being financially stable,” she says. Seeing creative and successful black-owned businesses especially, made her realize as a young girl, “Man, I can do anything. I can be in control.” 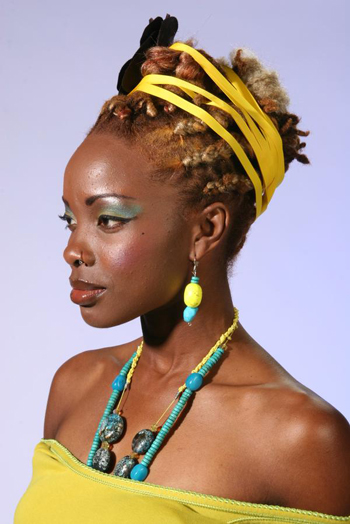 Cartel also had strong models and mentors at home. She credits a lot of her creativity, passion and drive to her father and mother. Her father was a gospel and jazz singer and memories of his jazz records playing when she was young nurtured her first love for art.
“He loved art but, he couldn’t pursue an arts degree; he had no choice as far as education.” She smiles, “He let us do what ever we wanted because he never could, but he always made sure you followed through and finished.” He’d say, “When choosing something extra-curricular,” because academics came first, “you have to think, is that something I can do as a career? And as an artist you need to be a businessman, because you need to feed yourself.” This proved to be a most valuable lesson.

Cartel’s mom, an activist and lawyer, passed on her own share of wisdom. She instilled in Cartel the importance of always having a voice, of being able to express one’s self, and having the ability to state her mind. “I think that’s where I got my poetry side, from my mom,” she reflects. An important contributor in Sacramento’s spoken word and urban poetry setting, Cartel has definitely been using her voice. Always a singer because of her father’s musical influence, she has also been involved with the Sacramento Poetry Slam Team and was an originating collaborator at the fondly remembered Blue Room, a weekly poetry series that was featured at Jazzman’s Art of Pasta many years ago.

It is King Jr. High School, however, where Cartel believes all these positive influences from her community and home first had the opportunity to manifest into the tangible art forms she creates now. It provided the perfect environment that allowed her good business sense, appreciation of art, value in education and the necessity to have a voice come alive. At King she had the experience of taking a wood shop class. Working with wood and using her hands is something she truly relished and soon she began working on her own.
“I was coming in after school and anytime I could,” Cartel says. “I had so many ideas, I never wanted to leave.” 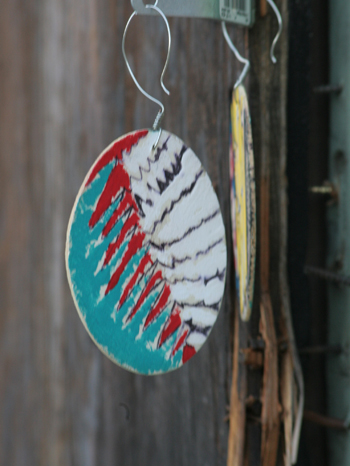 Eventually, Cartel moved from the Bay Area with her family to Sacramento. She felt an immediate sense that something valuable was missing. The abundance of art and the community in which she grew up were no longer present. She thought, “There isn’t anything here that I’m used to so let’s create some.” Throughout finishing at Kennedy High School, Cartel continued to create using the skills first practiced at King. She began making earrings from wood she would shape by hand. She painted and colored the wood transforming each earring into a wearable piece of art. Always full of ideas, she added colorful stones and fabrics to her designs making them truly original in style and form. One very important aspect of Cartel’s pieces includes her own meaningful poetry inscribed on key pieces. Originally, she just designed for herself, but soon people would see her designs, and ask, “Can you do mine like that?” Inspired and encouraged, she continued to follow her passion and has created an entire assortment of accessories, not just jewelry. 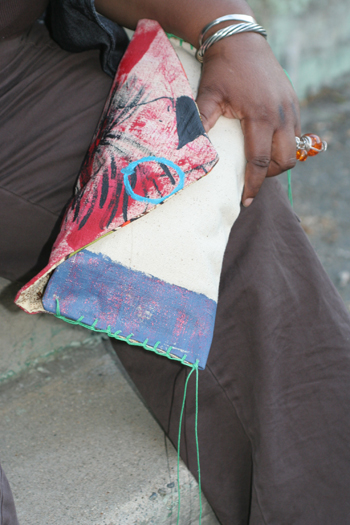 Since then, she has worked hard to create freely, share her voice through art and support herself doing what she loves. “I know something about being clear and focused,” she says reflecting on her efforts. “Success that is lasting always takes hard work and perseverance.” Still at it, she admits, “There are times when I want to quit.” Cartel acknowledges that support from her husband helps to keep her on track and encouraged when she gets down. People who invest in her work are also definitely appreciated. She makes an important point saying, “If we can buy stuff that is mass produced and manufactured for stores then we can invest in art.”

She explains, “What is better than getting something made from someone’s own hands? There is nothing better than that!” Cartel is not only an artist, but an avid collector as well. 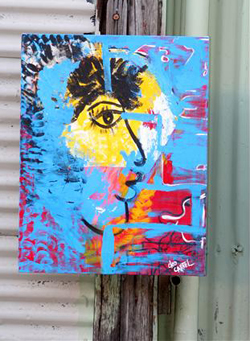 When asked about what she wants her work to convey, she says, “I want my style to represent freedom.” She says she likes to use a lot of vivid colors because, “colors represent a piece of heaven; they’re just something beautiful.” She hopes that in following her passions, maybe her work will continue to motivate that same feeling that she got as a young girl from observing the people in her community. She wants to inspire others to pursue their passion too. “Don’t be afraid to try something new,” she encourages. “You never know what comes with trying something new. You might create something beautiful that the world may need to see.” 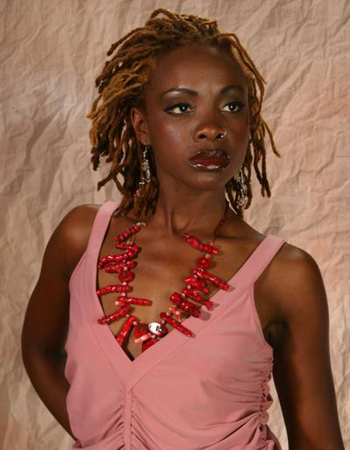