Art Rocks! • Artist/Philanthropist David Garibaldi Gives Back to Sacramento in a Big Way 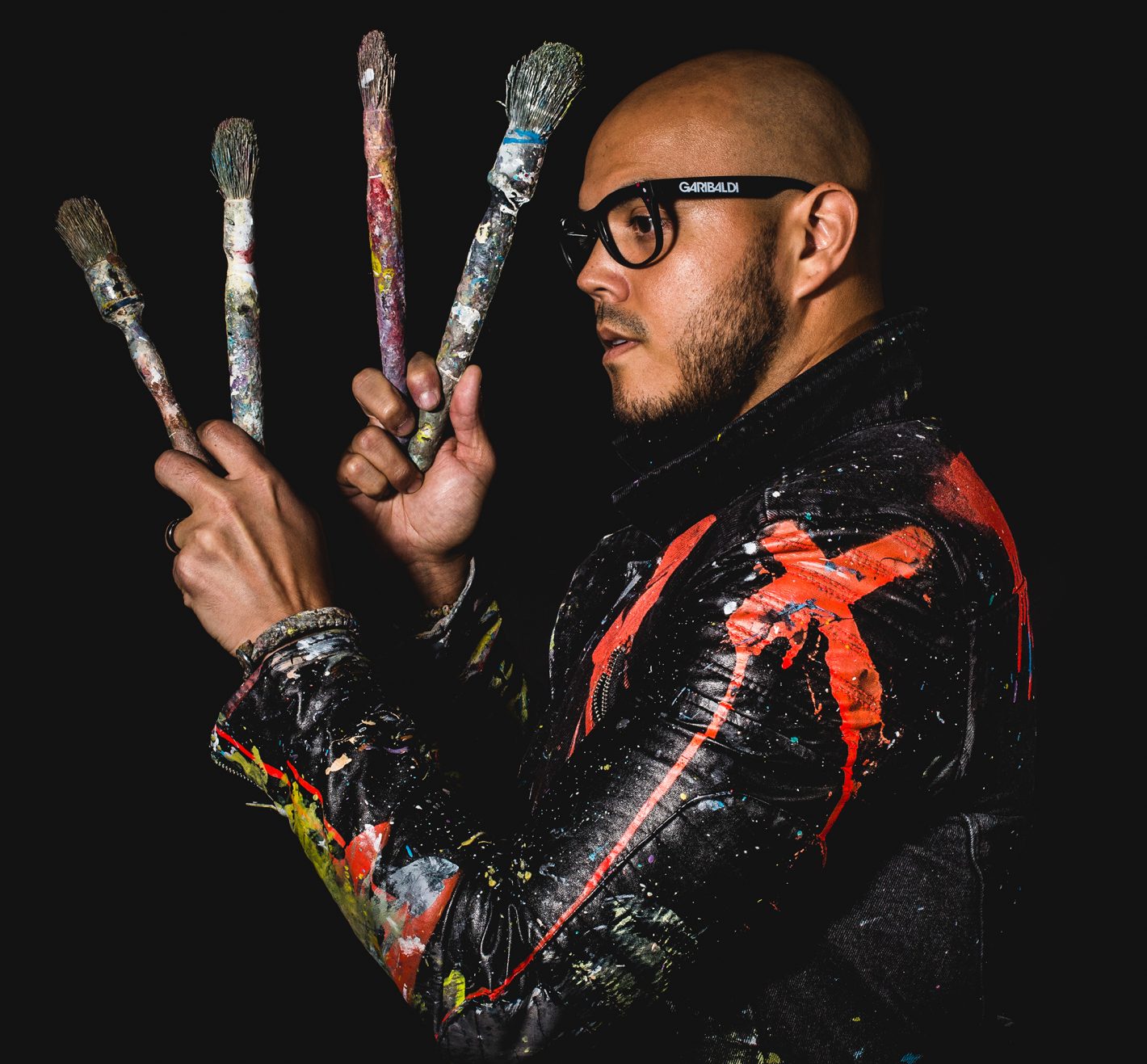 Most are familiar with the parable of the starving artist—the dramatic amalgamation of being artistically gifted but incessantly strapped for cash is a motif that has been romanticized beyond reproach: think, Vincent Van Gogh, Henri de Toulouse-Lautrec and Paul Gauguin. Cue the violins.

Rarely, however, does one see the trope turned on its head with the emergence of the artist-as-philanthropist. Typically, it’s the artist who receives the benefit of some wealthy benefactor looking to support the arts through their hefty bank account. Enter David Garibaldi.

The Sacramento artist has lined up an impressive résumé—from entertaining crowds with electrifying live shows that blend art and performance, to receiving a commission from the Disney company to bring to life some of its seminal characters in his singularly kinetic style, not to mention his visit to the White House at last year’s South by South Lawn: A White House Festival of Ideas, Art and Action. For the last several years, Garibaldi has been quietly donating his time, talent and coin in support of local and national philanthropic efforts.

“When I was 25 I realized that my paintings were being auctioned off for tens of thousands [of dollars], which is amazing to me, and I was grateful for that,” he explains. “But I thought, ‘OK, this is a great opportunity, how can we use this for a bigger purpose?’ So, I set a goal at 25 to raise a million by the time I turned 30. We met that goal before I turned 30, we’ve since raised almost $4 million now. I like to help organizations that are empowering people, for instance the Women’s Empowerment Program here in Sacramento [and] the Sacramento Children’s Home.”

Now, as Garibaldi prepares to return to the Sacramento stage with Art Life Live—an all-ages benefit at Ace of Spades on Nov. 25 for Turnaround Arts, a program of the John F. Kennedy Center for the Performing Arts and the President’s Committee on the Arts and the Humanities—he says that his passion for helping others comes from his experiences as a troubled teenager. Through the advice of his art teacher and mentor, he realized that the days he spent defacing property with his raucous graffiti-writing crew would only cause him grief in the long run, which he realized soon enough when his pattern of indolence prevented his graduation from Sheldon High School.

“I was always a creator, and I say creator because, yes, I was drawing, but I was also into Legos and cars—building things and creating stories behind them,” he says. “Then I also started playing the trumpet in third grade and I played until high school. So, the music and art were always parallel throughout my life.”

For those unfamiliar with Garibaldi’s work, the artists’ canvases bear the images of noteworthy and celebrated figures in pop culture. But they don’t spring to life in the lonely confines of his studio on the R Street Corridor. They instead emerge under the bright lights of the stage as he prowls the dais, igniting a firestorm of color on the canvas in a flurry of brushstrokes—a wash of yellow here, a slash of blue there. As the driving beats from one of his favorite hip-hop tracks serenades him in his progress, and amid the frenetic pace of the show, slowly a portrait begins to emerge. The audience waits in anticipation of which famous visage will appear on the once inky, blank canvas.

And while Garibaldi is enjoying the accolades, exposure and most certainly the paychecks, he confides that in his 20s he was unemployed, careless and lost most of his worldly possessions to poverty. He cites the Sacramento creative scene as the catalyst for his evolution from self-taught artist to performance artist to philanthropist.

“I started painting in 2003. I had never painted on canvas or with acrylics before, I just started teaching myself how to paint,” he explains. “I started combining what I love—music and art—and instead of waiting around, I thought, ‘I’m going to go and paint live where people are into what I’m into, and hopefully attract buyers or collectors.’” 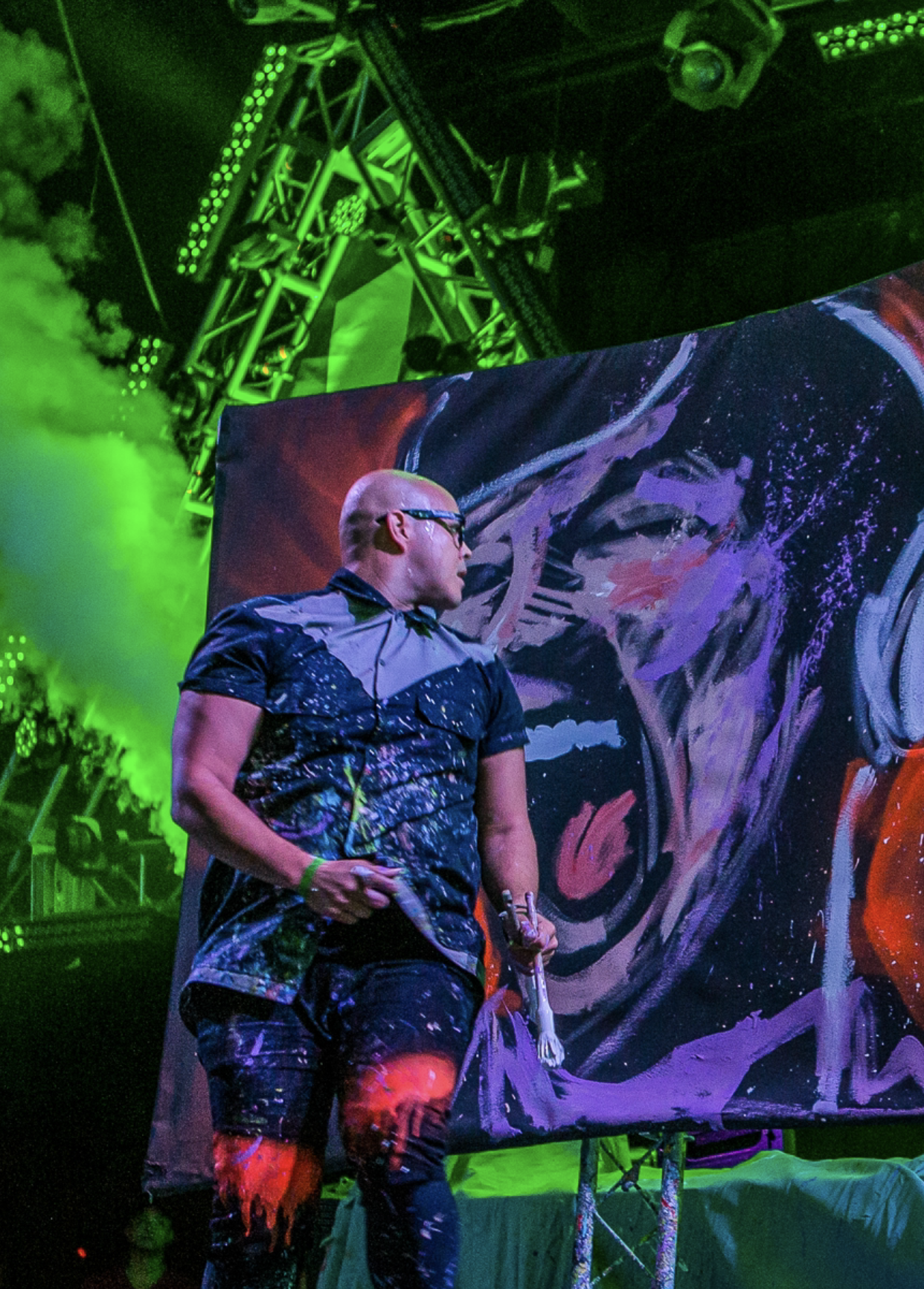 While Garibaldi admits that he probably gave away more than he sold, it’s because of those early art sales that he began to gain confidence. This propelled him on an upward trajectory that would lead to performances at the White House, the Rock ‘n’ Roll Hall of Fame and Museum and as the opening act for both the Blue Man Group and Snoop Dogg. Garibaldi says that with every $50 sale or $100 sale, his confidence in his talent grew. It was a tough time, but he was also fearless.

“I was dealing with the local scene at the time. In a sense I was the new kid trying to make my way in and I didn’t do things like everyone else,” he continues. “I didn’t talk to the right people, I didn’t go through those political channels that everyone else did. I was like, ‘I’m going to go out and paint live, and no one is going to sell my work and take a commission.’ So, I just didn’t care. I think that is where Sacramento came into play, why I say Sacramento was so influential, is because of the climate and the opportunity that was provided—you can create your own opportunity.”

It’s through this concept of creating one’s own opportunities that inspired Garibaldi to take his humanitarian calling to the next level as he sets his sights on expanding his legacy in philanthropy.

“I’m also starting my own nonprofit with my high school art teacher. It’s in the process right now and it will be up and running next year,” he says grinning widely. “It’s being called Creator X Project and [our mission] is to multiply the amount of creators in the world by giving them the tools and the inspiration to create. Similar to what Turnaround Arts does, but my dream, or my goal, would be to adopt a classroom for a year and make sure they’re fully supplied with not only the art supplies but also instruction.”

Art Life Live promises to reveal even more of Garibaldi’s fearless nature. According to Garibaldi, his fans can delight in both the expected and unexpected. The artist will be jutting around the stage at his usual frenetic pace, but says he plans to incorporate other components into the show that his Sacramento admirers have yet to experience.

“I am going to be doing a 60-minute performance,” he explains. “I’ll be doing up to eight paintings live—they’re done all completely different, some are multiple pieces that are moving. We’ve got this massive video wall that will be on stage that I’ll be interacting with, [and] I’m breaking out my trumpet for an interlude. It’s basically made up of a lot of moments and it’s a journey, but the concept is Blue Man Group meets Bob Ross. It’s an all-ages show, and I’m donating tickets to my old high school art class so I’m giving them 40 tickets because I want to inspire the next generation.”

Proceeds from the upcoming show will also benefit Turnaround Arts, the national program originally founded by the Obama administration. Garibaldi explains that when he was invited to the White House to perform last year, he was approached by representatives of the program and asked to be a Turnaround artist, an opportunity the artist-cum-philanthropist dared not deny—especially since the program speaks directly to his personal mission of providing arts access to children.

“I get to adopt schools around the country,” he says proudly. “I go visit them and do performances for them, but these schools have already been given funding and anything they need to use the arts to turn around non-arts issues like attendance, math scores, morale. I’m definitely getting more into arts education, more so because I’m learning about it firsthand.”

While Garibaldi continues to build his brand traveling the world with his artist’s palette in tow, his commitment to the Sacramento community continues to drive him in this next stage of his career.

“Sacramento creates this climate that [while] there’s a scene, you can also do your own thing, and I took full advantage of that, I didn’t ask for permission,” he explains. “I was just like, ‘I’m going to do this! I’m not going to take shit from anyone and I’m going to figure this out.’”

Rock out with your art out with David Garibaldi on Nov. 25, 2017, at Ace of Spades (1417 R St., Sacramento). Tickets start at $35 and proceeds will go to a great cause. Hey, it’s almost the holidays, so this is a fun way to begin the giving season. For tickets to this all-ages benefit show, go to Aceofspadessac.com.