Twelve years ago, a former corporate graphic designer from New Hampshire moved to California and experienced an artistic reawakening during an event that would shape the rest of his career.

David Lozeau attended the celebration of Dia de los Muertos, or the Day of the Dead, soon after moving to Southern California. He fell in love with the Mexican holiday, which dates back to the Aztecs and has become a rich part of California culture.

The Day of the Dead falls on Nov. 1 to Nov. 2 and is celebrated as a way to remember and honor loved ones who have died. Family and friends build altars to invite the souls of their departed, offering them special food, gifts and flowers. The event is celebrated with music, dance and group gatherings.

“When I first experienced the Day of the Dead, seeing the celebration each year and sharing in the community’s favorite foods and favorite songs, I was moved by the pageantry and beauty of it all,” Lozeau says. “I thought, wow, I wish I had done that when I knew someone who had died.”

The colors and liveliness juxtaposed with the ideas of mortality fit well into Lozeau’s other interests: hotrods, tattoos, lowriders, tiki culture and the Wild West. 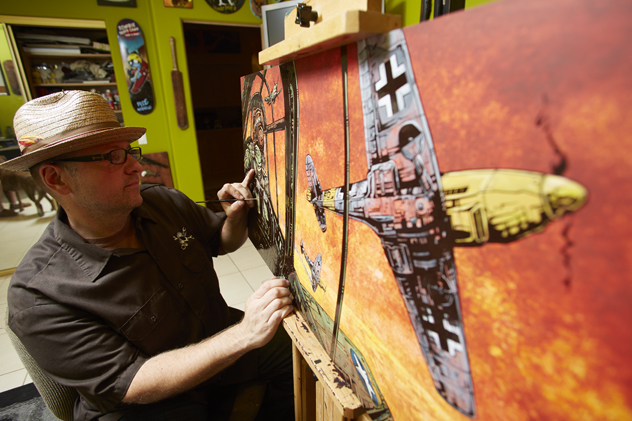 Lozeau began using his media of choice—acrylics, gouache and one-shot enamel—to create wild character-driven paintings that told stories in a lowbrow, humorous way while honoring the purpose and nobility of Dia de los Muertos and connecting it to the rest of the world.

“The enamel is the pinstriper paint used for hotrods,” he explains. “I watched guys painting hotrods at car shows and the way they did it is how my brain works so I connected the dots. It’s a very opaque paint I can use like ink. One stroke and done. I can move fast and loose and sketchy. It gives almost that 1940s or ‘50s movie animation look—color first, then the black line goes on top.”

Lozeau, who talks fast but with precision, covers his canvases, which include traditional materials but have included reclaimed wood and surfboards, with dense acrylics to create ethereal backgrounds, then adds very intricate details like the hollowed expressions of the skeleton with the enamel.

One example of Lozeau’s cross-cultural references is his Fortuity painting on a Chinese lute called a ruan of a samurai warrior skull with a koi dragon in his teeth, “indicating good fortune is on his horizon.”

“The same way I discovered Day of the Dead as something I could relate to, I wanted to bring to other cultures,” Lozeau says. “I’m kind of the middle man.”

Being white, Lozeau says he was at first concerned when he chose to become a Day of the Dead artist, because he didn’t want to poach from a different culture. But as he learned more about it through traveling, meeting people and seeing how it matched his own ideas and beliefs, Lozeau felt he could do the tradition justice. 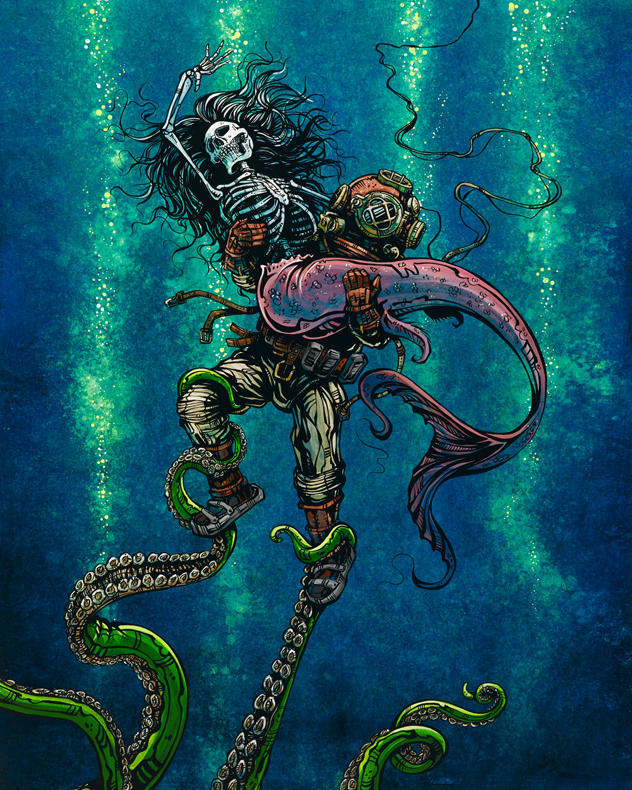 “I’ve been to places that celebrate death, and it’s how my house looks and how I live,” he explains when asked about what people may think about his work. “I have those grandmas you’re talking about come over with tears in their eyes for making their culture proud. They are proud that someone who is not part of it can find beauty in it. Whenever I do a live show or class, I explain this beautiful side of it, the cultural significance, and again, am that middle man.”

Lozeau adds that despite the holiday’s importance and prevalence in California, not everyone gets it and his art provides educational context as well.

He and his girlfriend have even collaborated on two children’s books based on his art that celebrate Day of the Dead through youth working together to help each other, learning to play instruments, and being themselves—even if they’re dead.

“I see more adults and older people who are confused but kids are rarely upset by skeletons,” he notes. “Even being on the road these last 12 years and the difference between the speeches I was giving then and now, the general public didn’t know what it was back then, but now with The Book of Life [animated film] and tattoos and Day of the Dead events, it’s opened it up to the general masses and it’s opened their quest to find out more.”

His efforts have paid off commercially, as Lozeau has created original work for Fender guitars, El Jimador Tequila and Disney.

Lozeau also creates custom frames for each of his original pieces.

“It’s a fun way to finish the story,” he says. “I used to do tiki carving but since I don’t do it so much anymore, the frames fill that carving void. I always say painting is the fun part, but when it’s done, it’s time for the hard part and that’s trying to figure out how to frame.”

Lozeau makes his frames nearly as elaborate as the paintings they hold, often hoarding vintage and antique pieces for years from his international travels until he finds the right use.

“If you’re looking at a painting of a giant samurai skeleton, it’s rare you’re going to say its frame is too much—that’s part of it,” he says of a frame he made to look like a Japanese temple. “And there’s no Asian skeleton samurai aisle at Michaels.” 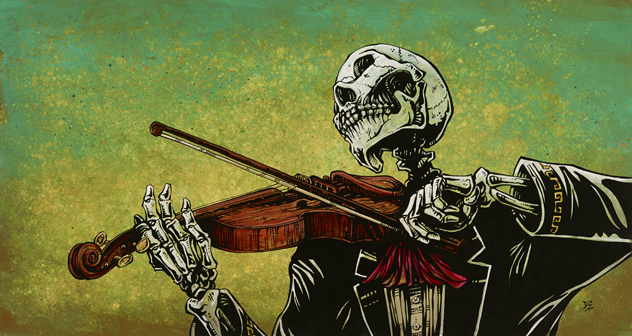 His skeletal heroes range from Wild West gunslingers and military troops, to lovers, octopi and geishas. Most recently, for the California Museum’s Day of the Dead special exhibit, John Wayne was his inspiration.

“I’m like every other boy. I wanted to be a cowboy, and I love doing cowboy action shooting where I dress up, and he’s from California,” Lozeau says of his John Wayne altar, which is up until Jan. 3, alongside with work from four other California artists who created altars for Amelia Earhart, Marilyn Monroe, Cesar Chavez and Ritchie Valens. 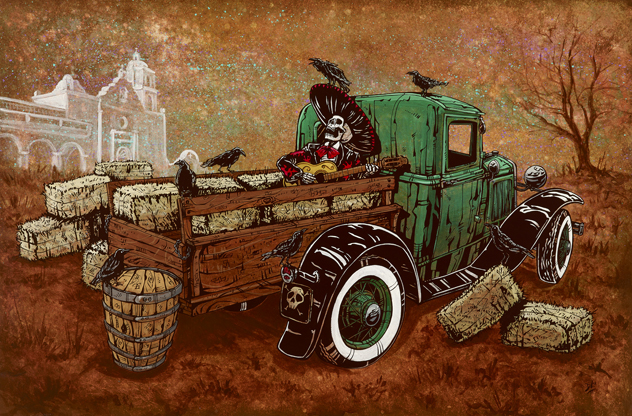 {Melody For The Mission}

This is the second Day of the Dead exhibit for the California Museum (the first one was in 2013), and was an idea from fellow artist Rob-O, who makes elaborate sugar skulls for Dia de los Muertos. The museum held a Day of the Dead party Oct. 16, and sold out of the 750 tickets available, Lozeau says. The night included Aztec dancing, food and music.

In addition to the artists’ original art and altar installations, members of the public are invited to commemorate a deceased loved one by leaving a photograph or small remembrance in the exhibit’s Community Altar through the end of the exhibit on Jan. 3, 2016.

Day of the Dead: Art of Dia de los Muertos is on display now through Jan. 3, 2016 at The California Museum, located at 1020 O Street, Sacramento. The museum is open Tuesday through Saturday, 10 a.m.–5 p.m., and Sunday, noon–5 p.m. For more information on Lozeau, or to purchase his very affordable art, visit Davidlozeau.com