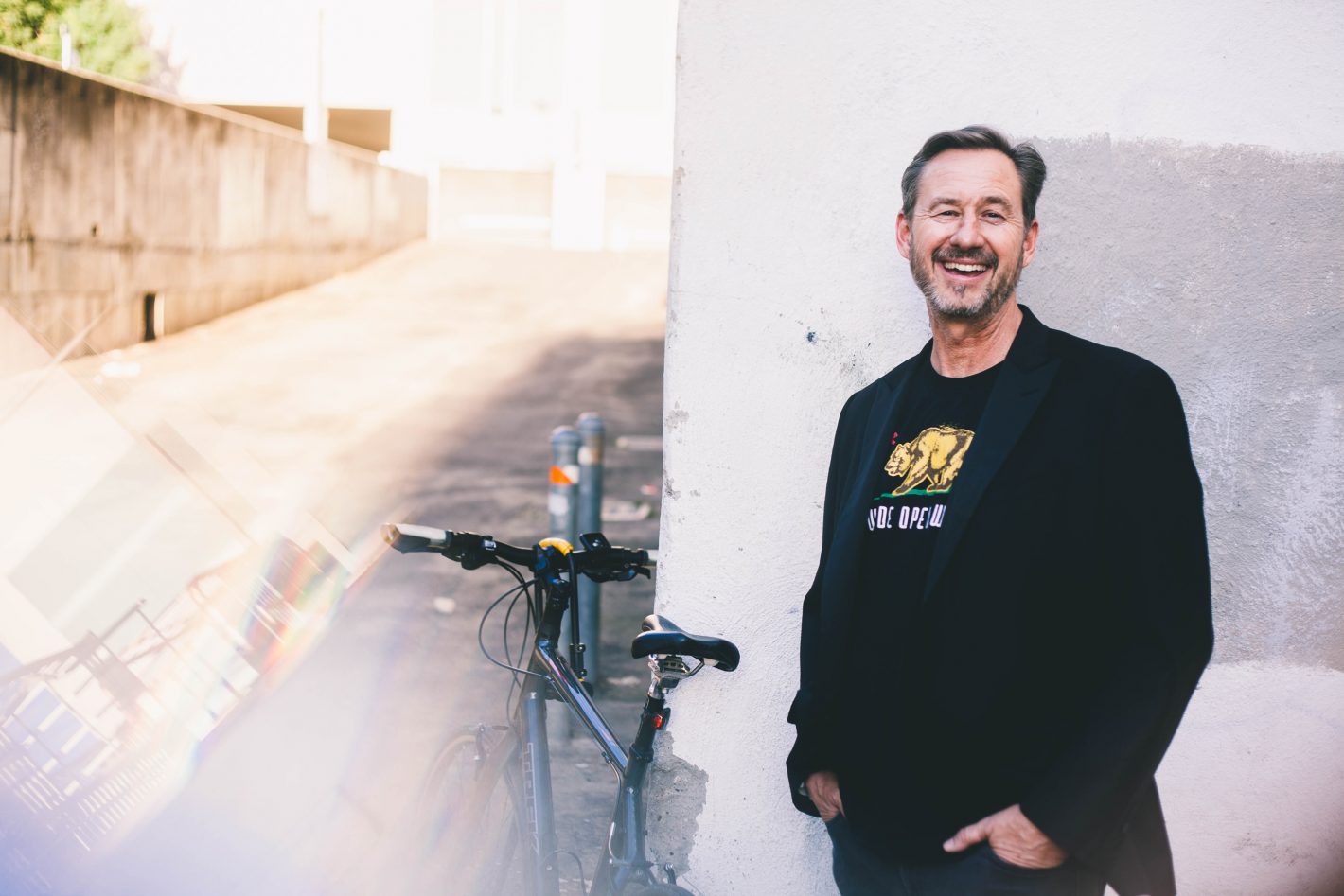 Standing in front of a blank wall bigger than a basketball court with 800 cans of spray paint and a surgical mask at the ready sounds like a scary adrenaline rush. But it’s a small piece of heaven for Michael McDaniel—an opportunity for the heart, mind and spirit to relax and create.

After living a childhood with uncontrolled psychosis that led to drug abuse and long stints in psychiatric hospitals, McDaniel’s spirituality helped him find a path to reality, and it included painting and helping others with their mental illness to be independent and creative.

McDaniel, 48, has been painting in Sacramento for nearly a decade. He has also been a case manager since 2005 at Transforming Lives, Cultivating Success (TLCS), a nonprofit that works to empower people who have mental illnesses and to prevent homelessness.

At TLCS, McDaniel has facilitated an art class for several years and has worked with more than 80 clients who struggle every day with psychotic symptoms, using art to provide them with a source of comfort and a way to express themselves.

“Art is in everything, and the greatest work of art is the human being,” McDaniel says. “I want to be able to share my artwork and use it to create community.”

McDaniel says he pictures these murals alongside community gardens, where students can learn about the importance of their environment in multiple ways.

Founder and producer of Wide Open Walls, David Sobon, has a similar goal. For Sobon, an international mural festival in Sacramento is the perfect way to build community, provide for underfunded art education, create landmarks, spur the economic engine and, ultimately, provide free, beautiful, art to all people.

Wide Open Walls (WOW), formerly the Sacramento Mural Festival, will feature McDaniel and 39 other artists—local, national and international—to transforming walls and neighborhoods across the city. He and 2 Hermano, of Sol Collective, are the two individual artists chosen through WOW’s commitment to supporting local nonprofits at the event.

Transformation is a key theme for this year’s WOW festival, which runs Aug. 10–20, 2017. Sobon has taken over last year’s inaugural Sacramento Mural Festival, run by Friends of the Arts Commission, and turned it into the largest event of its kind. No other mural festival has had 40 artists—many of them world renowned—create 40 murals in less than two weeks in one city, Sobon says.

The aim is to build upon the rich art culture of Sacramento that already permeates city walls, Sobon adds.

For him, the next level means continuously adding new murals to the list of nearly 700 that already exist in the Sacramento area (check out Nathaniel Miller’s interactive mural map, to which Miller will be adding each WOW piece: Journalistnate.com/sacramento-mural-map/) and putting Sacramento on the international stage.

WOW seems a perfect companion to the Crocker’s current special exhibit, The First 10 Years of Hi-Fructose, which showcases many contemporary artists who are, or started out as, street artists.

Excitement is already building for artists like Lora Zombie—frequently featured in Hi-Fructose magazine—a self-taught, self-described grunge artist, who has gained a massive online following across the world with her pop culture and cartoon-inspired watercolor paintings and wall murals.

Through her art, she shares her mind and colors, which are influenced by her path, Zombie writes from her home in Russia. 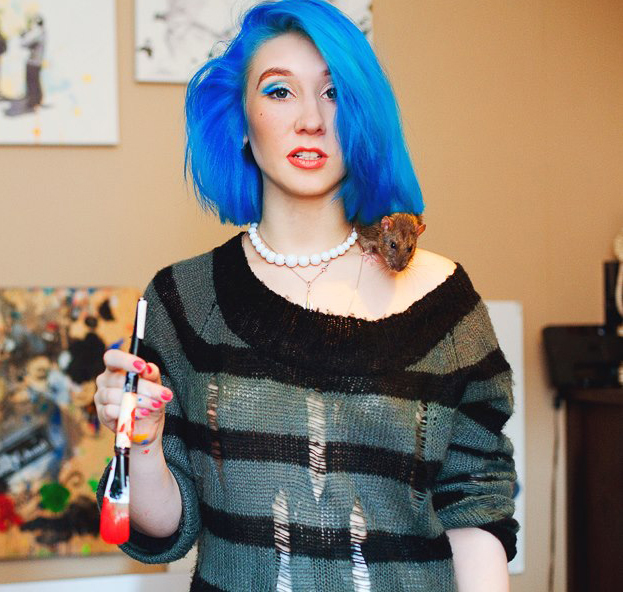 “Sharing inspiration with as many people as possible,” Zombie says, is part of the importance of art accessibility. Inspiration—from American cartoons, comic books and the Gorillaz—is what led the down her to becoming an artist, she notes in her explanation of her latest project, a clothing line called HEROTIME.

Wanting to join Zombie Flesh Eaters, the studio behind the Gorillaz, she changed her name and flew to London at 16.

“I looked up the address for the Zombie Flesh Eaters studio and rang the doorbell with my portfolio in hand, and a lady opened the door, looked at me and unsure of what to make of me, promptly closed it again,” Zombie writes. “I learned an important lesson at the time about the discrepancy between the desired and the actual, and the need to have a flexible mind that is ready for introspection and change.”

For the next decade, Zombie chose to create her own work. The emergence of street art from those like Banksy, and online forums that followed, catapulted her to star status.

Her mural on R Street for WOW, she says, will be about a feeling of gratitude to the universe.

“I warned R Street, Lora just did a West Coast tour … she had thousands and thousands of people waiting in line to get her autograph, and meet her, and take selfies with her,” Sobon says. “They’re going to have a lot of people on R Street coming to watch her paint. Or coming to watch Molly Devlin and S.V. Williams paint on the side of the Foundry. And Micah Crandall-Bear is going to be painting behind the SMUD station next to Beatnik [Studios].”

Sobon continues, “When our artists are painting in the same venue, the same event, the same festival, we get the attention of not just sponsors worldwide but organizations like Visit Sacramento—I mean, Visit Sacramento is our presenting sponsor and I could not be more thrilled,” Sobon says, eyes wide, punctuating each word for emphasis. “When we have the agency that is in charge of marketing Sacramento globally, thinking that this is the biggest event in town, that it could add more beauty, more long-term benefits than anything else we’re doing, it gets me pretty excited.”

Sobon notes that the murals will go up not just on the grid, but also in outlying areas like the River District, where an increasing number of Sacramentans experiencing homelessness are struggling to find help.

“Art is for everyone, and they deserve beautiful art like everyone else,” Sobon notes.

Power Inn Alliance, the business alliance for the vast commercial/industrial area around Power Inn Road, is also a partner, wanting to bring beauty among the rows of warehouses. Particular attention has been given to Sacramento’s Promise Zone, which encompasses 22 square miles of the economically hardest-hit neighborhoods in the city—from Del Paso Heights in the North Area to The Avenues in the South County. Sobon says the art is a catalyst to spur more activity, tourism and interest beyond downtown and Midtown.

He adds that WOW will only get bigger, and he’s already received calls from Citrus Heights, Roseville and other communities.

“Our supporters include the California Endowment, SMUD and Bank of America, but the support of private citizens has been important,” he says. “It has to be art for everyone and everyone has to be able to apply, and it has to include all cultures, be inclusive and expanded to other neighborhoods.”

Sponsors assist in paying for materials and to get the artists to Sacramento, and businesses and landlords pay for the opportunity to have a mural, with additional revenue going toward art education.

“I’d love to inspire art education and teach kids how to do this art form correctly,” Sobon says. “Teach them the rules and do murals in their schools in their neighborhoods.”

The purpose is similar to why murals started going up in Sacramento in the first place, 40 years ago.

The Royal Chicano Air Force (RCAF), a Sacramento-based art collective that started with the name Rebel Chicano Art Front in 1970, led much of the public art scene in Sacramento to promote political awareness, educate and feed youth, and foster support for Cesar Chavez and the United Farm Workers.

The impact of founders Jose Montoya and Esteban Villa is still widely felt in the region, and continues to be integral to the Chicano Art Movement in the western United States.

That tradition of accessibility and social responsibility is what Sobon hopes to continue. WOW will include opportunities for the public to engage with the artists at gallery openings, public mural tours, artists’ receptions and panels, First Friday and Second Saturday celebrations, the Wall Ball—an art-themed fundraiser for arts education—and while the artists are actually creating their large-scale works.

Sobon and curator Warren Brand gathered artists by both invitation and with a public call for artists. The final 40 will create works diverse as Sacramento and each bring a different perspective to mural art and participation in some of the most ignored alleys and streets. 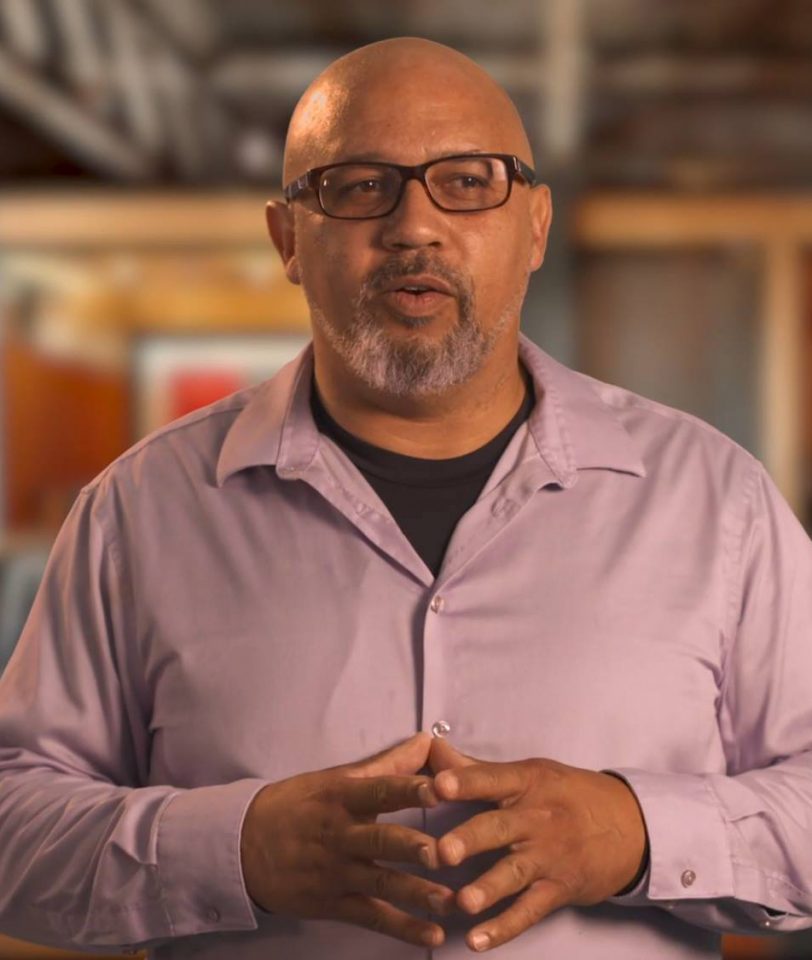 McDaniel’s mural is set to go up at 917 Seventh St. in Improv Alley, just one of many alleys downtown sprinkled with art but that leave much to be desired.

His mural of the American River will show the greater universe above and below it.

“Light and water and matter create this incredible reality we get to experience,” McDaniel says of his concept, as he shares childhood memories of growing up with the American River in his backyard, and of fishing, hiking and biking. His paintings often include a bearded iris in memory of his mother, who suggested he start painting as a way to help him through his mental illness.

He includes the flower for a second reason.

“One day I was riding my bike with my camera and I stopped outside Sacramento State where I first saw this bearded iris, and started crying, ‘Dang Lord, I’m almost 30 years old and I’ve never seen a flower like this?’ It humbled me and reminded me that life can be beautiful but can also be like a vapor.”

The thought matches the reality of street art—that it is, ultimately, temporary.

Sobon hopes that the murals created as part of WOW gain the same respect and recognition of those historic pieces around town that have been preserved over decades.

But even he’s not worried about losing this form of art.

“Last year, we only did one mural in Jazz Alley as part of the festival, but five more have gone up since then because artists got permission from landlords to do more,” he says. “A lot of artists are just looking for canvases to paint on. And festivals like this bring legitimacy to street art.”

You’ll have several opportunities before, during and after Wide Open Walls to experience the art of more than 40 muralists descending on Sacramento during the month of August. For a chance to purchase art and swag, visit Beatnik Studios Aug. 4–25, 2017, for the WOW gallery show, which will have more than 50 pieces on display for sale. The reception is Aug. 4. To check out the full list of WOW events, learn more about the artists, and donate to the cause, visit Wow916.com and follow WOW on Instagram, Facebook and Twitter.