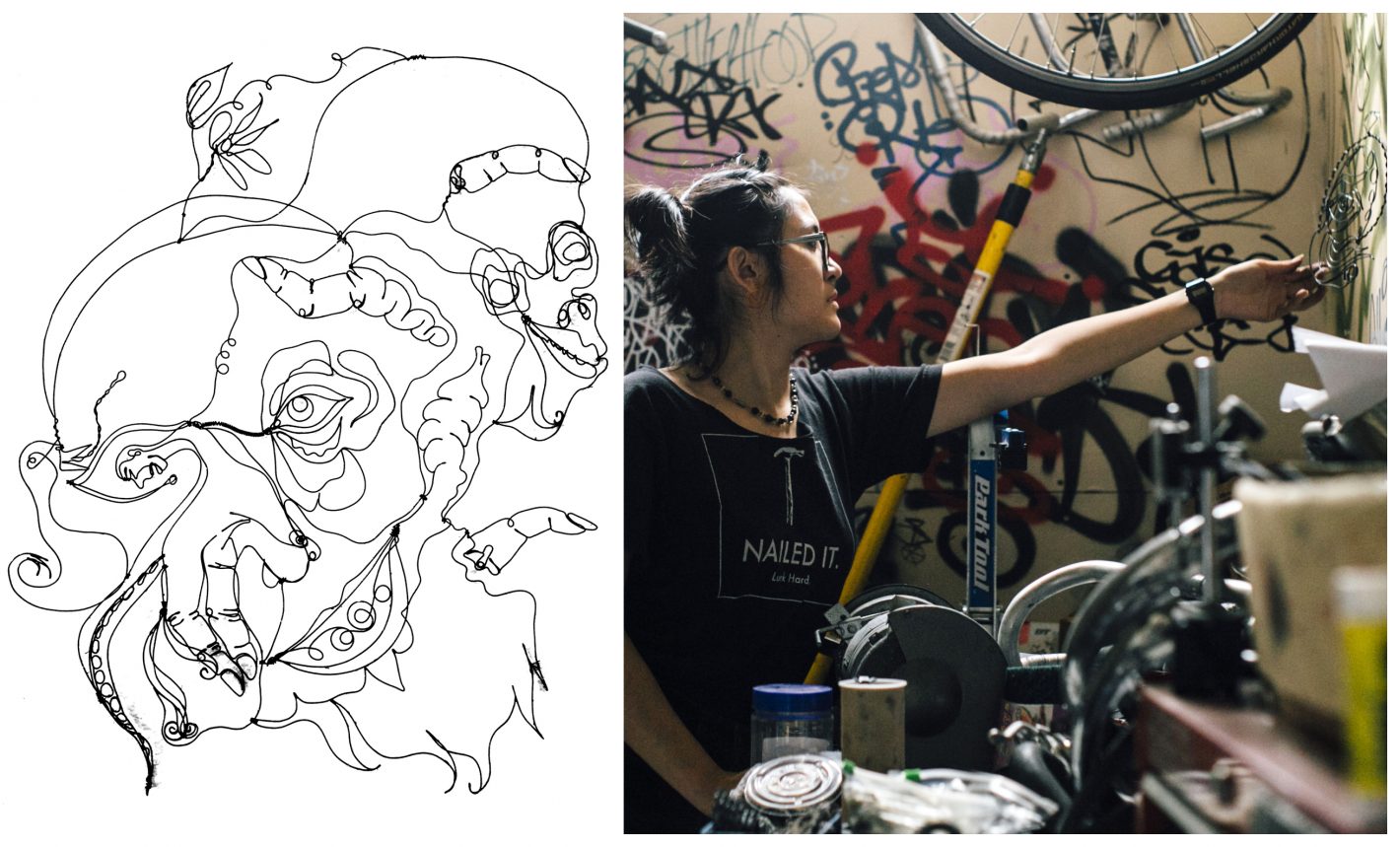 After creepy-stalking her website and wondering “How the heck does she do that with wire?!” I was nervous to sit down at Identity Coffees with artist Diana Dich as she unpacked her traveling art studio of sorts: a spool of thick wire (acquired at Home Depot), two sets of pliers and a yellow notebook filled with sketches and ideas. The ball of wire sat on top of the smooth wooden table like a snake, the end reaching up and poised to strike at Dich’s glass of iced tea at any moment. Unlike a scene from a Tim Burton movie, it doesn’t move—so I come to think of it like her trained pet; the wire bends when she wills it to. After all, she’s been training it for a decade now.

A South Sacramento native, Dich says she always enjoyed painting and drawing, but she had her lightbulb moment when she was 15.

“One day in art class, the teacher handed everyone a spool of wire and said, ‘Here, make 3D art,’ and I was really the only one that managed to make anything out of it,” she laughs. “I made a dad flying his kid like a kite—you know how kids always want to fly? He was making his kid’s dream come true! Everybody took it the wrong way, though; everyone was like, ‘Why is the dad throwing his kid?’” 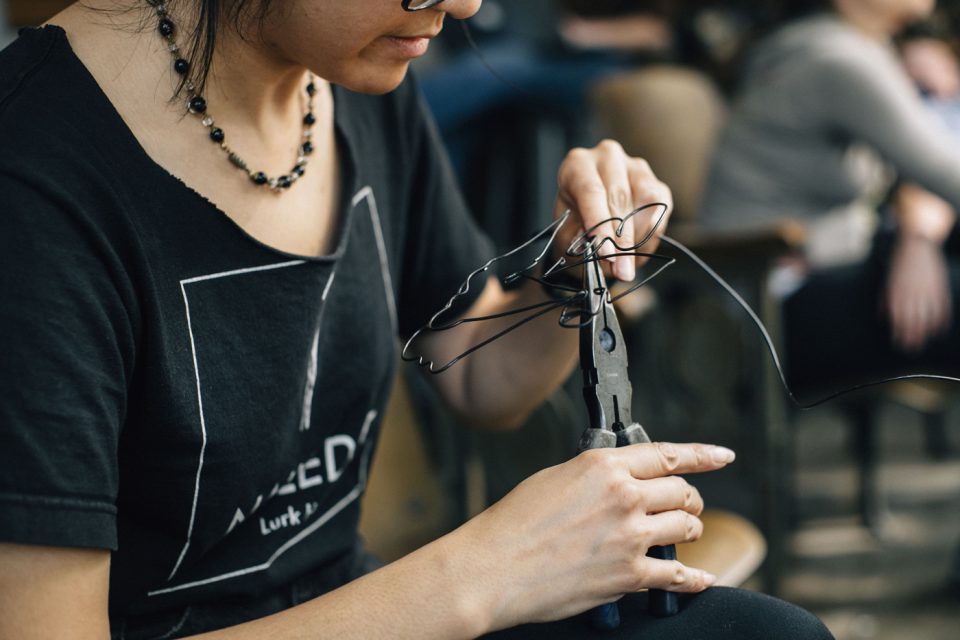 This misunderstanding is a common theme within Dich’s work—dramatically rendered faces and figures that always hint at something below the surface, like a thought left unsaid.

After quitting her two jobs and getting out of a toxic relationship that kept her from making art, Dich was inspired to channel her depression and inner turmoil into making her sculptures full-time. She said she spent every day at Insight, sitting and working for hours to create what would eventually be a series of all women’s faces and figures displayed on the walls surrounding her.

“I used to just do men’s faces in my art, so that was the first time I decided to do women,” she says. “It was the first time I really opened up myself within my work. They looked kind of creepy, but it was the only way I could describe what was going on. It’s hard to put emotions into words sometimes.”

One of Dich’s favorite pieces from that show at Insight, which she said epitomized her depression, was that of a woman’s face in the grips of two hands, surrounded by red paper flowers. “I planned to burn it in effigy,” she says, “but it sold before I could do it.” 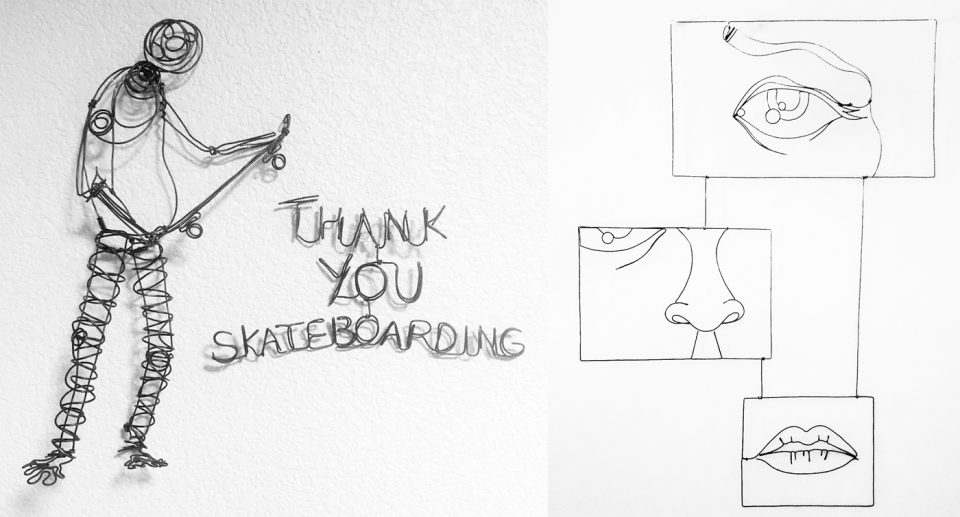 As with most creative people, Dich used art like therapy: it was there for her when she needed to work through whatever life problems came her way. One day, it was all taken away from her. She became physically ill to the point of losing her ability to walk or use her hands to make art. She says that the doctors misdiagnosed what was initially a minor infection that progressed rapidly into an advanced kidney infection.

“I was in so much pain I couldn’t even move my thumbs, and my boyfriend had to physically pick me up and carry me to bed. That was one of my breaking points because I couldn’t do art for about four months,” she says, “I didn’t know what else to do. I didn’t know how to make a living.” 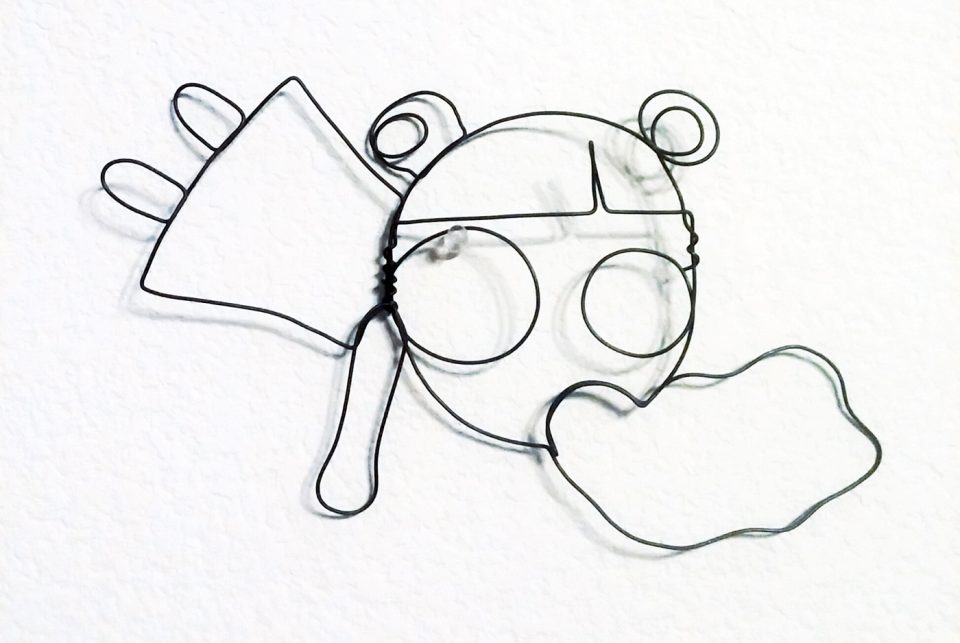 The sickness made her lose 20 pounds, and it took her months to build her strength back up to start walking and making art again. She admits that the first solid food she could eat was a childhood comfort: bologna and cheese on white bread. 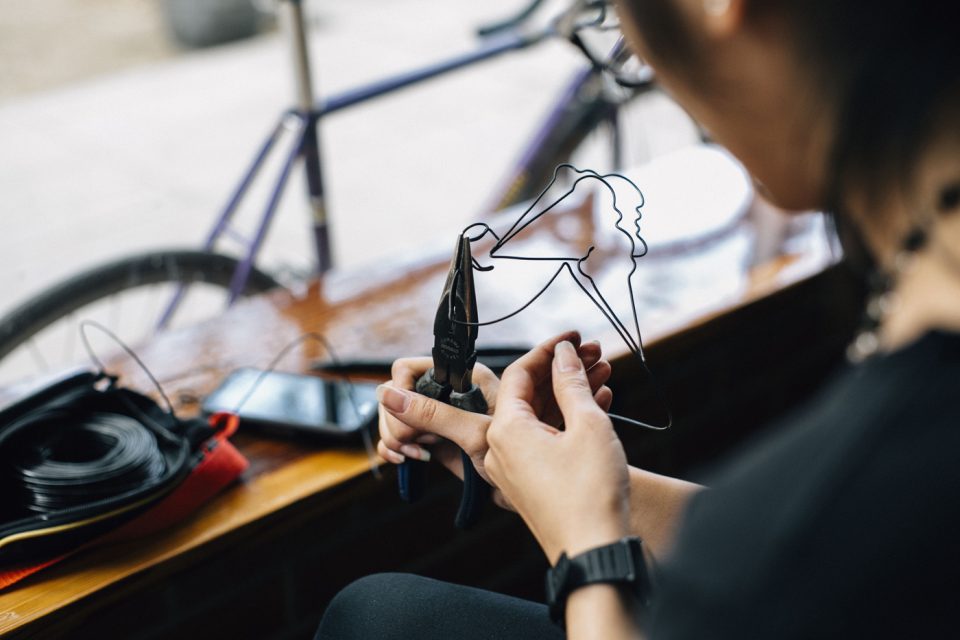 After healing from her sickness, Dich hit the ground running with exhibits. First she had work featured at Insight, then went on to have pieces at Blackbird, the Art Hotel and 1810 Gallery for an all-women art show, where she met Mimi and some of the other gals from the Few and Far graffiti collective, and they became quick friends, which she admits is hard to do in a town where the art scene is mostly skewed toward men that don’t often take criticism very well. “There’s no ego there. We’re all just super honest with each other and the art scene and I respect that a lot. Sacramento has great potential.”

In addition to the pieces she creates for her shows, Dich also makes jewelry and custom wire lettering, which can be purchased on her website. For her upcoming show at WAL, Dich hints that her pieces will have a style appropriate to the Halloween season. 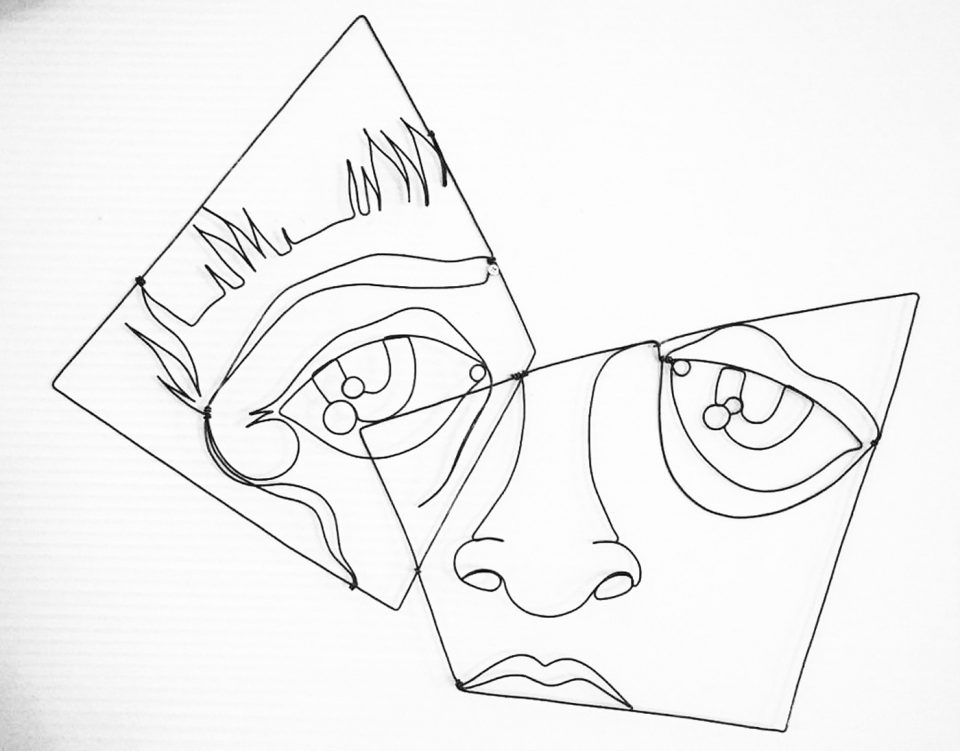 “It’ll be a lot of the creepier-style large 3D sculptures, and there will be some single-strand pieces as well,” she says. “I was really excited to go back to the style I started with. It’s going to be a great show.”

And although her show hasn’t opened yet, she’s already eagerly plotting what her next pieces will look like. “I’m working on a Stranger Things-themed piece for a project,” she says, “and I want to do more of the silly ‘sad girl’ pieces. I’m going to make more jewelry, too.”

Perhaps Dich’s most exciting upcoming project involves light. “I want to make light fixtures, too,” she says, like an excited student ready for the next challenge. “I studied abroad in Italy, and I remember walking around at night because it was so hot during the day, and I looked up and noticed the way the light caught this one particular fixture, it was like shadows playing. It was unintentional, I think, but it was just really cool.” 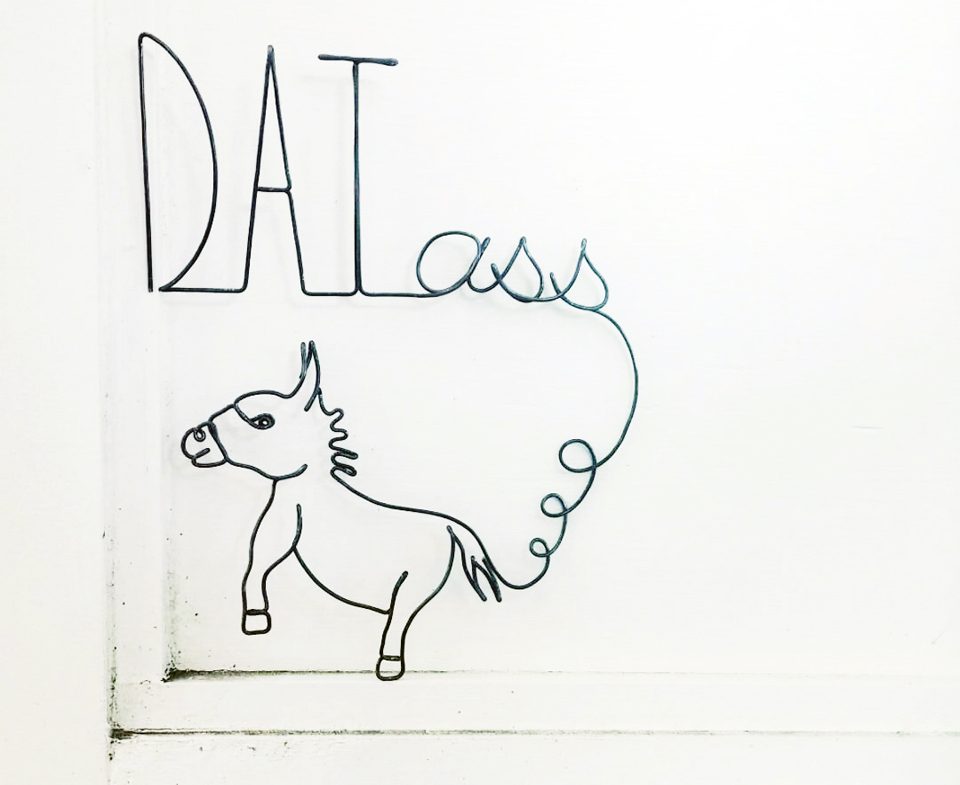