DoofyDoo Pays Homage to the West Coast on The Tourist

Photo above by Evan E. Duran

It’s hard to know where to even start when it comes to Drew Walker.

When I first met Walker, he was an outgoing stoner (he’s proven it’s possible!) who would play guitar from the porch of his former Flop Haus digs on H Street and mercilessly push you to support local music and have fun doing it. From there, I remember always seeing him sitting behind a drumset with a handful of local bands or involved in the production of a local show in one way or another. Other times, he would be walking around the city for hours, posting fliers for shows, snapping film photos and stopping at what seemed like every other house to catch up with friends.

A few years have passed, and lots of things in this town have changed. However, it is comforting to see Walker as one who remains consistently motivated when it comes to his craft and his commitment to the Sacramento music scene. And just as when I first met him, Walker still has that seemingly never-ending desire to create.

Fresh off tour with his band, Gentleman Surfer, Walker has rolled out his current labor of love through his solo project, DoofyDoo. This current endeavor is a collection of 15 EPs of edited live recordings that pay homage to every city he has toured in over the past year. He has called this collection of recordings, “The Tourist: The West Coast In Audio”, which he describes as an album, “Spanning both Western borders, part beats, part guitars, part anthropological adventure, a collection of tracks from, for, and about 17 different cities and towns between Tijuana and Vancouver.” He says that the album was made, “Using tapes, samples, fx and found instruments. Each track on the album represents a unique unrepeatable experience in the city it was recorded in including Sacramento, Davis, San Francisco, Reno, Oakland, Santa Barbara, San Diego, Mexicali, Tijuana, Long Beach, Portland, Olympia, Seattle, Anacortes, Eugene, Port Townsend and Vancouver.”

The Tourist is a long, freaky musical trip. There is song after song of looping soundbites and melodic story lines that almost play like subliminal messages. Drew did hours of research on each place he visited, and collected sound snippets from different sources, using them as grounds for improvising in live performances. He then recorded and edited the raw performances and turned them into albums. This process continued over the course of a year, blossoming into a glimpse of the hyper world of Drew’s brain.

“My desire to go on tour, meet new people, and travel really left me with the idea that I wanted to know the people and places on a more personal level,” says Walker. “I would go up on stage with a semi-planned idea of what I would be performing, but it was all with the idea that it would all organically unfold onstage.” In other words, he would reach out to his surroundings for creative motivation.

Each song is accompanied by writings and pictures. “I like to capture the snapshot of an experience,” says Walker, “Every song incorporates a different experience.”

Every EP was recorded in a different venue in a different place and with a completely different audience, and there are even instances where Drew has used the equipment of other acts. “Sometimes I’ll ask other bands playing the same gig if I can use their instruments. It’s what gives it that nice tweak or something different. So a lot of the songs even use entirely different equipment.” All factors have helped create something aesthetically different every single time. In the end, a total of 18 varying live shows were edited to create The Tourist.

“This work definitely takes a third eye to take in,” says Drew, “In fact, I hope some people are high when they first listen.” He gave me permission to oust his reefer influences, saying, “One of those songs is titled ‘4/20/2015’ and was recorded in San Francisco at this crazy bar that was also a performance venue and laundromat. That was crazy, but also one of my favorites.”

Walker sees this project as a huge artistic piece that couples many concepts that go beyond the musical. Every song has photographs, writings and art he has personally created specifically for each album and its tracks.

“It is a huge piece of performance art in my eyes,” he says, “Essentially the collaging of images from my life on tour. Its takes on a personal and unique form with each performance.”

The tracks take the listener on a sonically animated roller coaster ride, with little to no actual singing. Most vocals are limited to sound snippets and people talking about stuff like racism, parking tickets, Sac history and Birkenstocks. A lot of these sounds are rhythmically repeated and paired with Walker’s live drumming and other instrumentals. One notable thing about Walker’s style, is that he has managed to master the art of being spontaneous and free. It genuinely feels like his unedited subconscious unapologetically seeps through in every song. It is wacky and weird and sometimes dizzying, but it is never boring or trying to imitate anything else. The Tourist feels personal and authentic without any pretentious connotations.

On Dec. 6, 2015 The Tourist will officially be released in its entirety at the renewed Blackbird Kitchen + Beer Gallery. In fact, the recently renovated (re-re-renovated?) venue is opening its digs early just for Walker’s show. Since the community raised over $800 through Indiegogo to help make Drew’s touring project possible, Blackbird is hosting a dinner as a thanks for everyone before the show.

This reception will be something entirely new for Walker and his music. Rather than being planned and rehearsed, Walker hopes to follow suit with The Tourist, and let things unfold organically. There will be a gallery reception, with a music video premier that he is really excited about. “The music video is made to go with the Sac song,” he says, “It’s going to be 12 awesome minutes directed by my friend Gabe, aka Tiger’s Blood.” A live performance will follow, that will surely be wildly improvised; something that will be utilized to make another improvised album that was based on his previous improvised albums.

When asked about his motivation for this work, Walker says, “If you like it, go deeper. It’s an experience that involves all of these people and all of this information and it’s all part of it here. It’s not about just music, but it is verging on fine art/outsider art. Essentially, my show will be about sharing, celebrating and then moving on to something else.”

Grab your copy of DoofyDoo’s The Tourist Dec. 6, 2015, at Blackbird Kitchen + Beer Gallery at 1015 9th Street in Sacramento. The all-ages show will include a live performance, video premiere and gallery reception and is free with purchase of the album. For more info, go to Facebook.com/doofydoojams 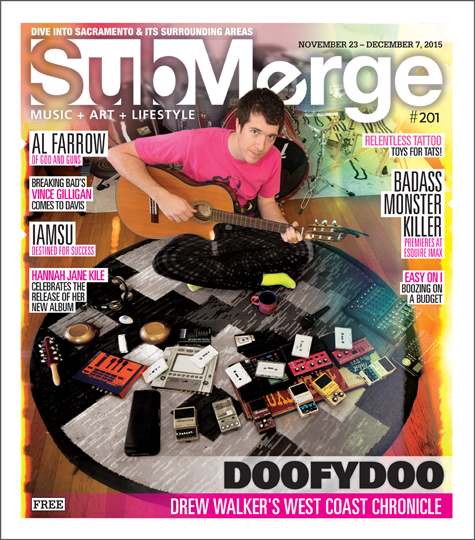