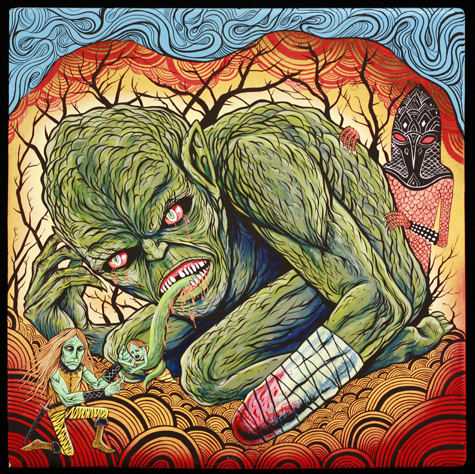 Skinner Foresees the Fall of Man with His Latest Exhibition

Whether you’re a nerd, stoner or activist, Skinner’s art may speak to you. The Sacramento-based artist has had his work adorn local architecture ranging from the Sacramento City Skate Park to Big Brother Comics, and now with his upcoming show at Upper Playground, entitled No More the World of Man, Skinner hopes to “raise the bar” for himself.

“It’s fun for me to do these insane art shows, and this is the first time I’ve gotten really socio-political and it’s because my mindset is now so affected by the Bush administration and the world beneath that,” says the artist. “I feel like we’re an obnoxious entitled white culture. I think it’s bullshit. I think a lot of things need to be addressed before we can become this evolved, peaceful society of people. And if that doesn’t happen, fuck it. I don’t think there should be any babies for 100 years, and then the animals can have the planet back and everything will be cool.”

In addition to the show’s content, Skinner will also employ a few different techniques to create a more engaging event than simply looking at paintings hung on a wall. The artist has welded life size bodies and swords to adorn the gallery space and 3-D glasses will be available to heighten the viewing experience. He says the glasses work by separating the color spectrums of his paintings causing some colors to appear closer to the eye while others seem further away. The effect is rather trippy.

“I’d probably go to jail for giving everyone LSD-laced Kool-Aid, so I’ll just give them some 3-D glasses,” he jokes.

No More the World of Man opens as part of Second Saturday on July 12 and runs through August at Upper Playground on J Street. In anticipation of the event, Skinner gave Submerge a brief window into his “weird ass brain” during a recent interview. 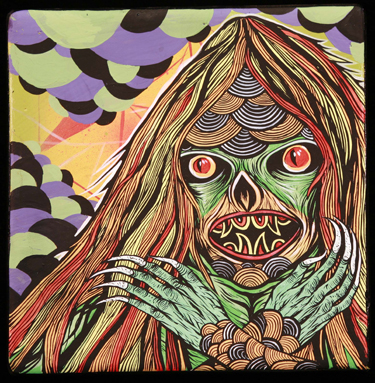 I’ve heard the term “lowbrow art” used to describe your work, and I was wondering how you felt about that.
See, I think that’s an interesting term. It’s an interesting term, but it can be used in a negative way. It marginalizes the message or the effort of something. When something is considered lowbrow, it marginalizes what it’s capable of doing and what it’s capable of being. I personally think my artwork is fantasy art, even though it’s not traditional oil painting stuff. It’s fantasy art. There’s so many mixtures of influences in my art, but primarily I would say it’s fantasy art with tendencies toward socio-political commentary. I think the term lowbrow art doesn’t necessarily apply to what I’m doing, because I may smoke a lot of weed, but I’m not stupid.

It seems like a condescending term.
Well, it was a direct rebellion from the pretentious fine art movement, which is so fucking lame and boring. 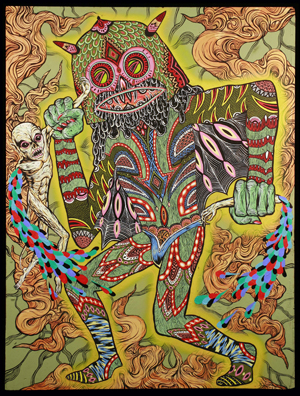 What kind of things politically do you hope to express with your work?
There have always been these struggles in society between the upper class and the lower class. I provoke a lot of those influences in my art. Also, the idea that we are struggling in this society, especially since this is a capitalist society where the people with the money have everything—the conveniences and the luxury—and basically everyone else is making sure that that happens by working very hard for very little pay. There are some gender inequalities and social inequalities that I find to be totally infuriating. I’m trying to provoke some thought with my art without standing on a soapbox.

Since your art features a lot of monsters and other fantasy images, do you think viewers pick up on the messages or is that not something that concerns you?
I think people pick up on whatever they’re going to pick up on in art. A lot of people like looking at a character doing nothing in a painting, and I think that’s fine, but it’s just not for me. I provide the influences and creativity that I’m a part of, or that I see is relevant in my life and put it out there. I feel like even if people aren’t catching on to whatever knowledge I’m trying to kick out there, or whatever thing I’m trying to share, that they see there’s a level of sincerity to it. I’m grateful if anybody can feel that way about what I’m doing. 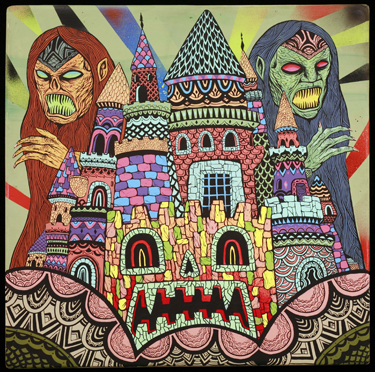 When I first saw your paintings I picked up on the Dungeons and Dragons influence because I used to play myself. When did you get turned on to D&D?
I was like 15. I just got into it. There was no social pressure; there were no sports. It wasn’t anything fucked up. You could just draw and get weird and eat pizza with your friends and get into something that’s escapism. I think the reason I try to maintain that level of naÃƒÂ¯vetÃƒÂ© or innocence in my artwork is because that’s the part of myself that I see that I love in other people. When I see someone who’s hella old or in a business suit or something like, but then there are these little moments when they act like a kid or you can see how they must’ve been like when they were little, that to me is the magical shit right there. How you were and who you were before you were influenced by social pressures and our social structures, which kind of steer you into column A, B or C. I’m just like fuck all that. That shit doesn’t make me happy. Competitive capitalist ideology—I can’t flow with that shit.

Your work is really psychedelic also. When did your fantasy influences start to merge with the more hallucinatory stuff?
I started to research a lot of these Mexican and South American tribes and their usage of psychedelics. I noticed that their awareness of the color spectrum and their ability to use colors to create optical illusions and create a level of intensity that I found very spiritual and strange. I introduced that into my work; a lot of artists now are using low tones and mid-tones, tans and dark greens and stuff, but I just got brighter and brighter. I just like it. It looks really good to me. Plus, I did a lot of acid in high school and I would take a lot of drugs. It was really hard for me to exist with my weird ass brain in Auburn. 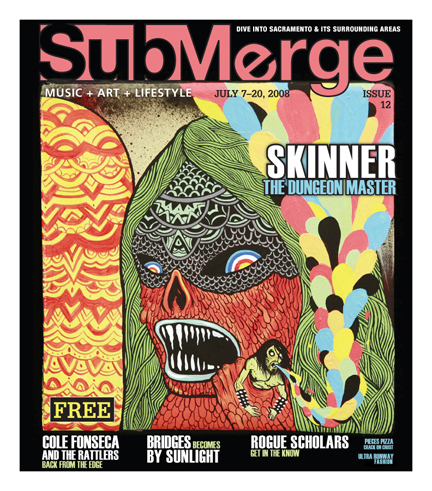