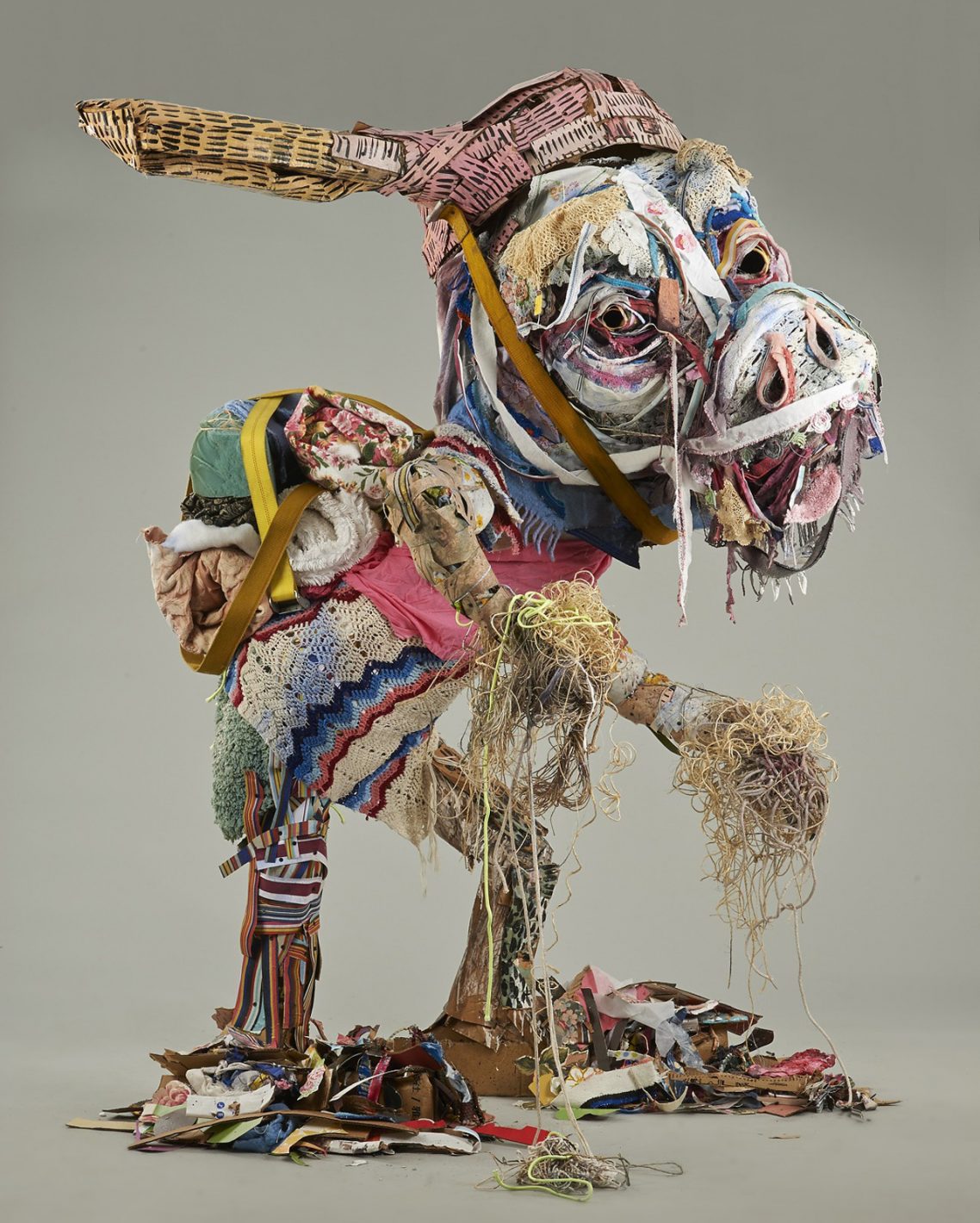 (This is Not a) Love Song is a new body of work by Sacramento artist Elisabeth Higgins O’Connor at Verge Center for the Arts. Sitting on a folding chair in the literal shadow of her sculptures, without the buzz and hum of the crowd from the opening reception, was surreal. It brings to mind the idea of sitting in a workshop of Disney animatronics, after-hours; skin peeled back to reveal the elaborate patchwork underneath.

Higgins O’Connor creates large-scale, fantastical works, joining massive animal heads with bodies resembling that of a human. They are constructed with discarded domestic textiles and wood framing. Imagine a tornado ripping apart a house, and the entire contents reassembling themselves loosely in the form of these hulking, enormous fantasy structures. Their postures almost seem vulnerable or self-conscious.

The artist makes no attempt to craft a slick or seamless sculpture, and in turn puts their inner workings on display. Bedsheets cut into thousands of pieces—hardened and dissected—form the skin of one. Colored cardboard tacked like shingling onto the exterior of another. It’s the sheer amount of hand carved materials painstakingly arranged that make the viewer step back in awe.

The opening reception on Sept. 8 was a chance for the public to walk amongst Higgins O’Connor’s massive-scale, animal-like creatures, in a show with fellow UC Davis alumni Mathew Zefeldt, with his work titled Windows. Both of these are on display until Oct. 16, so make your way over to Verge before it’s gone. This show is the last of four shows celebrating the partnership between Verge Center for the Arts and the Manetti Shrem Museum of Art at UC Davis, which will open on Nov. 13, 2016.

On Tuesday, Submerge had a chance to sit down with the artist and ask some silly questions. 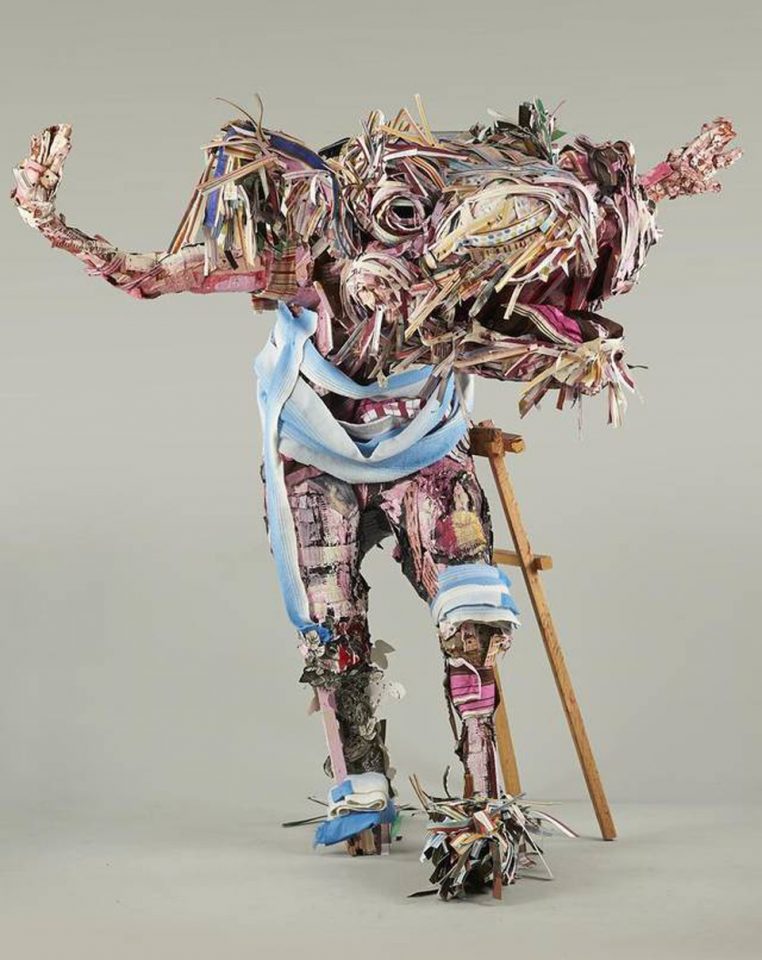 On Del Paso?
Yeah that’s the best Thrift Town, for me. And the bedding section’s always really orderly. So it’s things like that, like fabrics that are out of step, or things that don’t fit into a domestic setting anymore. I’m interested in domestic objects that once provided comfort that are no longer providing comfort.

I think that the common thread throughout the work has been the domestic textiles, like the blankets and pillows and bedsheets, because they’re loaded with content, for me, and it’s cheap, or relatively free, and I can paint with it, so I’m not buying really expensive acrylic paint or oil paint, but I can make a big red swathe without buying a $20 tube of paint 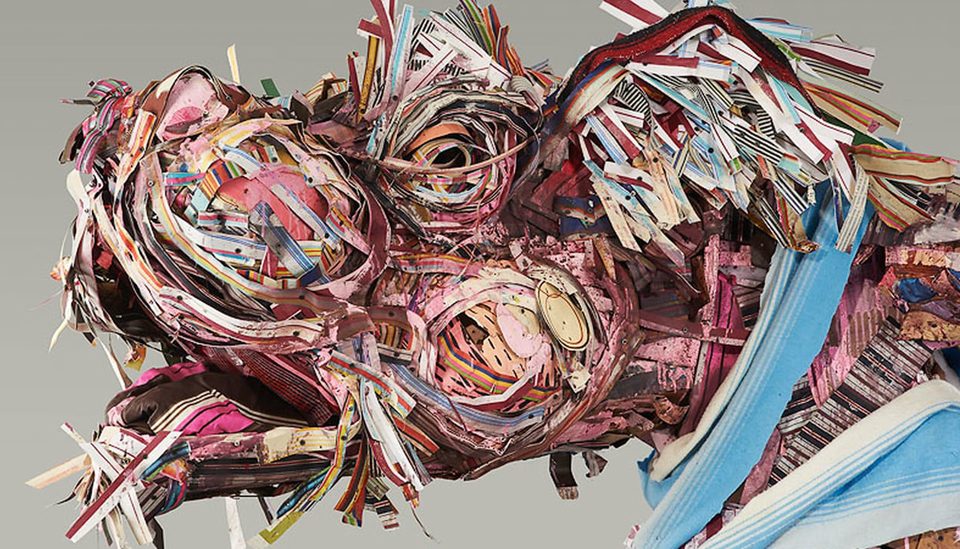 In your childhood, were you interested in animals that take on human form?
I think I’ve always been interested in animals, not to have them as pets necessarily, but they drive a narrative, and often times, morality tales or fables. Sometimes they’re thousands of years old, and they’ve been passed on through tradition or oral tradition; animals are often used to point out human foibles or society’s ills.

I think as a kid I was denied stuffed animals because I had a lot of allergies and asthma, I think about that a lot. I don’t think I’ve really told too many people that, but I was very jealous of kids that had lots of stuffed animals, and I kind of wonder about that; was that a seed that was planted, like, maybe I’ll make my own eventually.

When did you discover a need to create or draw, was it at a young age?
I don’t really remember, I think one of my earliest memories is drawing, and saying that I’m an artist, like in kindergarten or before kindergarten, and I don’t know exactly how that came about, but I always identified as an artist, even as a really little kid. And I was supported by my parents. My parents weren’t well-to-do, but they supported whatever we wanted to do … They never discounted any of our pursuits.

Do you have gestures in mind for your sculptures before you start them?
The three newest ones, yes, because they started from drawings, but for the older ones I don’t.

They’re intentionally clumsy. Coming from that ceramic background, my work was really tight.

I’m building them intentionally kind of clunky and awkward. Like, there are elements where they’re extremely elegant, like around the eyes and the mouth, there’s this precision of like very dainty things like a lot of that face is put together with quilting pins, and cut out really fragile paper and bedsheet bits, and then there are moments where it’s devolving into complete awkwardness and clumsiness. I think something about incorporating both ends of that spectrum in the piece are interesting to me. 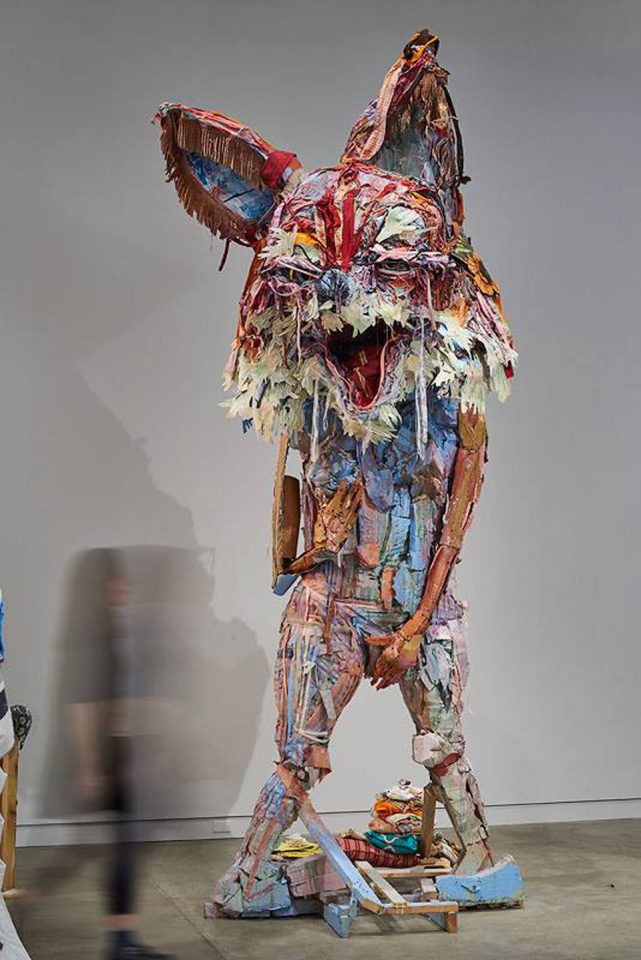 Was there a time when you feel like you wanted to move away from things being really tight to being more organic or loosely structured, or chaotic? Was it a gradual shift?
Yeah, I think in the ‘90s I was very well known for bodies of work that were very tight ceramic work and they were kind of doll-like, you know with human bodies and animal heads, but porcelain, and very tight.

And then 9/11 happened and the art market sort of fell apart temporarily. I was teaching at Cal State Long Beach, and something about, there was this break, there was this moment in time, there was this line in the sand where the world was rigid, and then 9/11 happened, and then the world was breakable. So something about that affected the work and me, so I think the language of destruction, the language of war-torn landscape. I think the work is born out of a lot of righteous anger with the system.

Are there any artists that are inspiring you right now?
I really like David Altmejd’s work. He’s a figurative artist; very strange figurative work that’s very, very, large scale, like the heroic male, but he’s using wigs and glass eyes, and the bodies have the cavities and caverns in them where they’re part landscape, they’re really fantastic. He’s a huge influence.

And I also love the work of Joyce Pensato, who’s a painter who makes these rather expressionistic, super large-scale portraits of cartoon characters, like Homer Simpson, or Mickey Mouse, or Donald Duck, but they look like they’ve been made with a giant paint sprayer. They’re very large scale. Sometimes she’s invited into these spaces where she’s painting or drawing on the wall, and it’s just like, splattered everywhere, it looks like a slasher movie mixed with Donald Duck’s face! It’s usually just black and white and charcoal, or black and white paint. There’s some amazing images of her studios over the years, with paint everywhere, just kind of that wonderful looseness, to be able to have that much freedom, and not have to worry about getting paint all over the floor, or ruining someone’s studio if you’re renting a space or even at home.

That’s been holding me back, because for the past number of years I’ve been like a visiting artist at places or I will be installing work for over a month in a space, but you know, being in a place like this or in a place with black polished marble floors, or the space in Seattle, once the work got to the site there was still a lot of things I had to do, but it had a heritage terrazzo floor, so I couldn’t like drip paint or anything in there. So thats been a hindrance, so it was really wonderful, to make, for the two months I was in Seattle, it was a metal fabrication building it was just filthy, but it was huge, and my space was huge, and I just had the ability to drip paint and splatter paint, and the landlord was fine with it, and because the place was so filthy from all this black dust from metal grinding, and industry over years, the paint actually made it cleaner, because the paint would just fall on the floor and pool up and dry up, and when you’d peel it up, because it was so dirty it would just peel up like a Biore strip off the floor, so I actually cleaned it up with my process.

Is there another body of work you’re going to be working on in the immediate future?
Immediate future, not right this second. The three (largest) pieces are going back to the Vancouver Art Center.

I have an installation that will be at the Contemporary Jewish Museum in San Francisco next fall. It’s a show that’s based on Jewish fables, so I’ve been invited to create some work as a response to the story of the golem. That’s the next body of work that I’m going to spend time on.

Time is running out to see Elisabeth Higgins O’Connor’s (This is Not a) Love Song at Verge Center for the Arts, located at 625 S St. in Sacramento. Her exhibit is being shown alongside Windows by Mathew Zefeldt until Oct. 16. 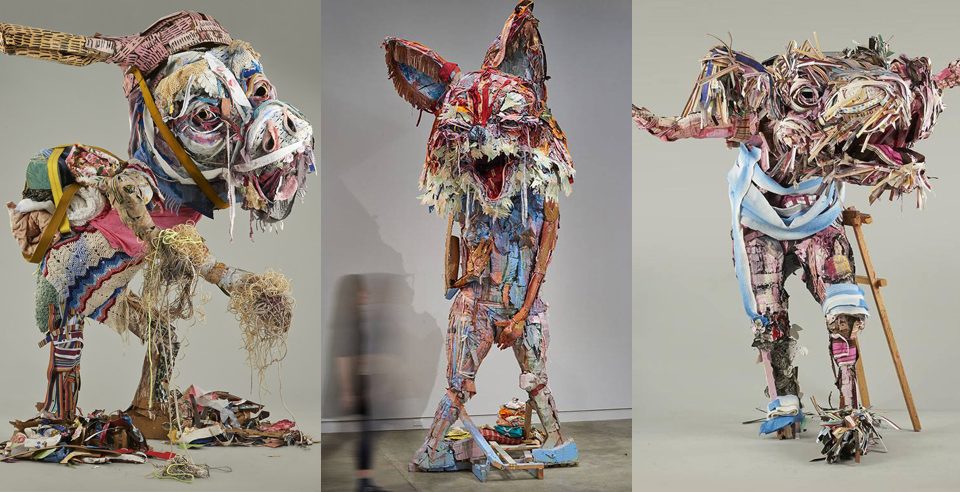