A Journey Into the Unknown

There’s something dichotomous about visual artists. Take for instance, art displays in coffee houses. The artist comes in and revisualizes the space, and patrons have the opportunity to scan each piece as closely as they’d like. But the artists themselves needn’t be present. On one hand, their work is upfront and exposed. But if the performance doesn’t need the performer, there lies some mystery. From the viewer’s perspective, it can seem as though the artist might feel isolated from new audiences, but it’s quite the opposite.

“It feels interactive to me and helps me get my artwork to such a wide array of people, just to see what they think of it,” said Erik Hosino, an artist nearly native to Sacramento who’s been displaying his work at Temple Coffee.

“One of the great things about hanging art at a place like a coffee shop, especially in a place like Midtown, is you really get a slice of the population. You get everybody from lawmakers, people at the capitol, to young hipster kids and everyone between,” Hosino said. “I’ve been flattered to see people who buy my artwork are not just this age group, this type of person, that I’ve actually sold artwork to young people, old people, white collared, all over. So in that sense I get that interaction.”

Hosino has been living in Sacramento since before he turned 1, and has been drawing throughout his entire life. 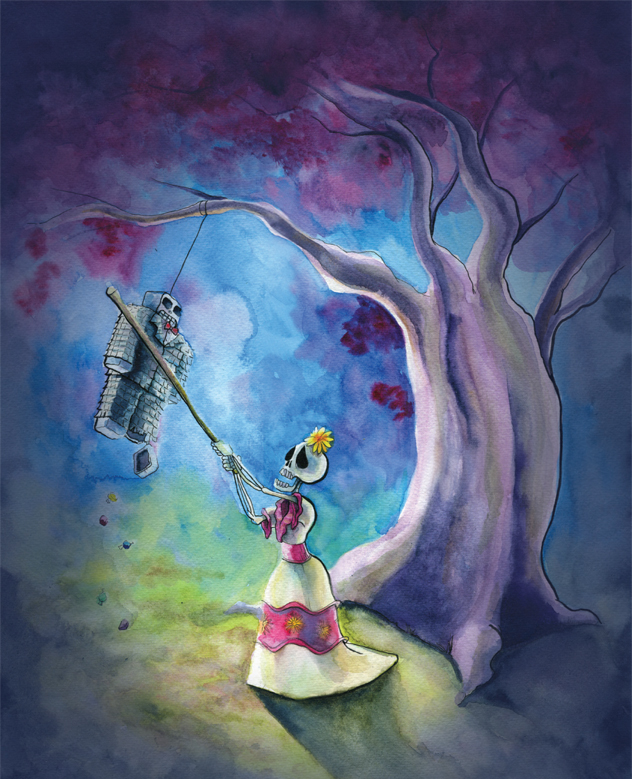 “The extent of my formal art training honestly doesn’t go too far beyond high school and a few classes at the junior college,” Hosino said. “I think the fact that I took to art at such a young age has kept me inspired to keep doing it.”

A huge part of that inspiration has come from studying well-known artists like Edward Gorey and his masterful pen-and-ink illustrations. Hosino’s work has been compared to Tim Burton’s numerous times, both sharing a similar darkness, also found in Gorey’s work.

“I’ve had people look at my artwork and think, ‘Are you depressed? Because you paint a lot of stuff about death and skeletons,’ but honestly it’s quite the opposite for me. I think that by sort of accepting death and celebrating it as a part of life has made it less taboo, and therefore it’s never felt weird to depict it whether in an explicit or more symbolic way. But because I am sort of drawn to the mysterious, I think that darkness and dark subject matter does lend itself well as fodder for my artwork.” 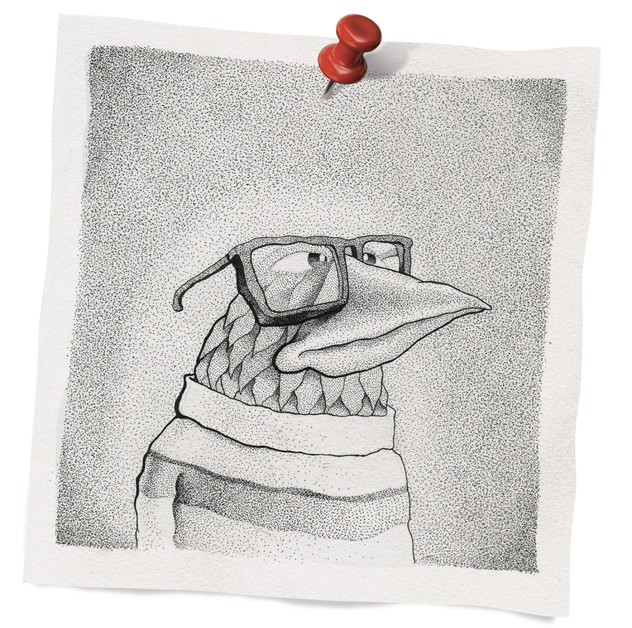 Since an artist is rarely present if you by chance see their work hanging somewhere like Temple, the next inevitable step a curious viewer would take would be to look up the artist online. If you search Erik Hosino, one of the first things you’ll come across is a website called Superheroes for Hire, or as Hosino puts it, “The thing I’ll look back on my death bed and kick myself for.”

The idea started out as a project for a class. In his late teens, Hosino had this idea for creating an agency of B-rated superheroes, banding together their lackluster talents to try to find work. The project was praised by his teacher, which inspired Hosino to develop the idea a little more. He sent the piece to Comedy Central and a few other networks. Comedy Central got back to Hosino and asked him to redraft the idea a bit. At the time, Hosino was about 20 years old, and with the motivation level of a 20-year-old and some unexplainable hesitation, he let the opportunity slide and never followed through.

“Now that I’m older and take my art more seriously in a lot of ways and am a lot more disciplined and passionate, I hate that I did that,” Hosino said.

While it was a heartbreaking setback, Hosino has kept the project alive in a smaller capacity. The website has an interactive feel to it, allowing the visitor to scroll through the various superheroes for background on their minimal capabilities, and a comment section for superhero service requests.

“It was a total lesson learned. I try not to beat myself up for it because I was young and I was straight-up stupid about it, but inspired me to keep the idea up,” Hosino said. “It only exists in that incarnation now, but in some ways it gives me some happiness to know it’s not totally dead.” 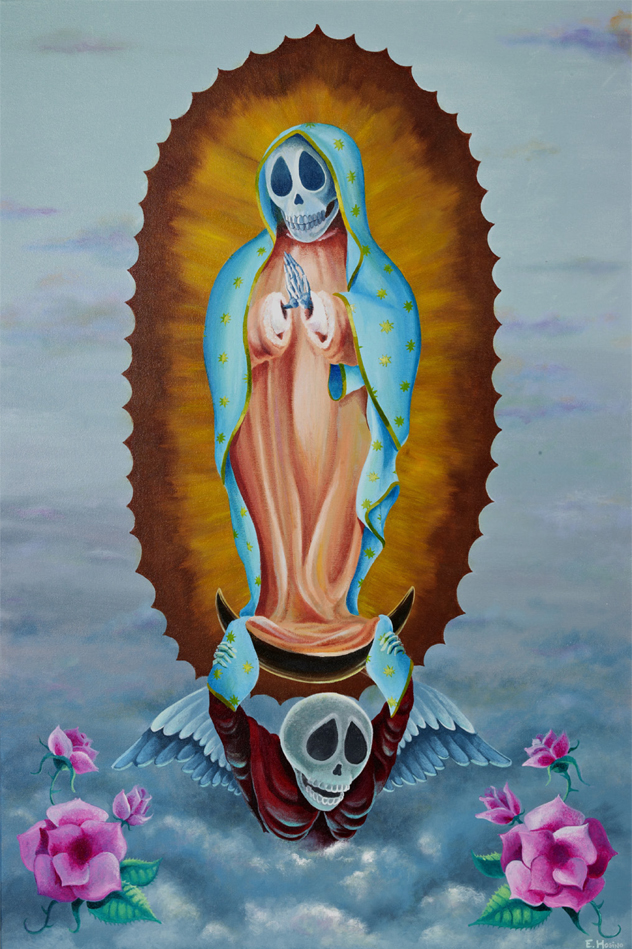 A good starting point to get a broad sense of his style would be checking out his collection called Strange Places, a book released in January 2011.

“I’ve had people come to me and say they want to buy either a print or original, and maybe they couldn’t afford the original or the one that they wanted was sold. Strange Places was partly a response to people’s desire to have a collection, just a sampling of my artwork,” Hosino said.

Hosino’s style is a blend of odd, imaginative and eerie. Bodies with bulky shoulders and torsos and pencil-thin arms and legs; dark scenery with curled tree branches or cavernous dark spaces. A mix of imaginative and morbid—all very slight, enough to set a somewhat creepy tone but not fearful. The book gives a good example of his versatility. Each style requires a different medium to create. 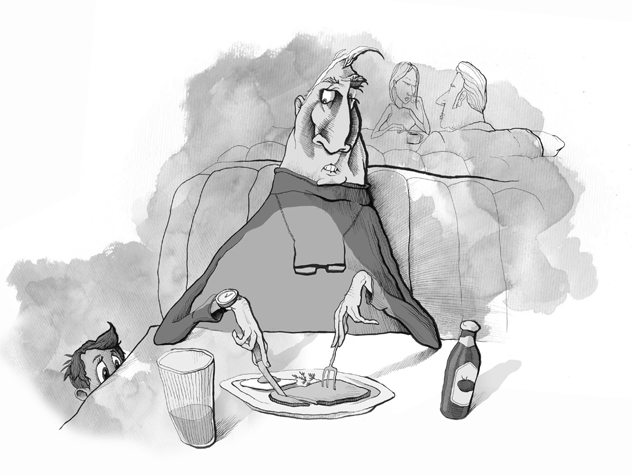 “If I want something chaotic or fluid, that’s where watercolor comes in; and if I want something really controlled, really tight pen and ink lines help achieve that,” Hosino said. “By day I’m a graphic designer, although I’ve been drawing a lot longer, the designer in me informs the way I work as an illustrator. It’s kind of a blessing and a curse. The illustrator in me often longs to be more spontaneous and organic, but the graphic designer in me longs for structure, planning and cleanliness and often times gets the better of me.”

It seems almost as a way to subconsciously merge both sides that Hosino gravitates most toward watercolor.

“I love the organic way, when I work with pen and ink and watercolor—which is a common combination for me—I’m very controlled with my pen work, and I let the watercolor play as much of a role as I do,” Hosino said. “I spent a long time trying to get a good command of watercolor, and it’s only recently I grew to accept it’ll kind of do its own thing. Not only did I accept it, I embraced the fact that I can control what I can control when I’m drawing, but when I put down that watercolor it adds a whole organic way to my illustration.”

Letting go of a little control has become one of Hosino’s main strengths within his artwork. 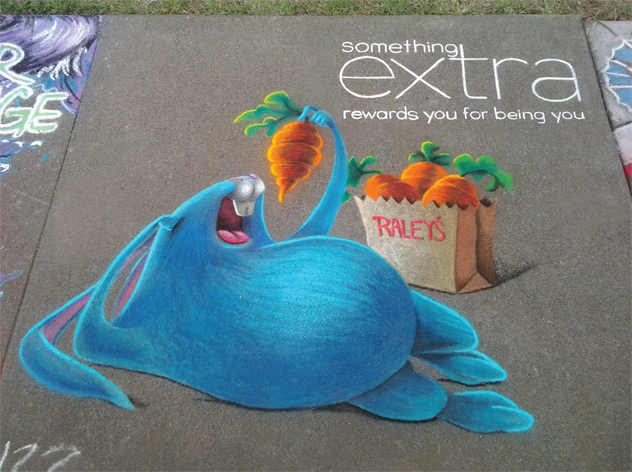 I’ve found those kinds of pieces that people gravitate mostly to of mine are the ones where they are interacting with it and filling in the blanks,” Hosino said. “That’s one thing people enjoy about my artwork and wasn’t intentional at first, but when I omit certain details to appease, people have come up and said, ‘Oh man I’ve been staring at this piece forever and trying to figure out what’s going on,’ and sometimes they fill in the blanks on their own, other times they like the fact that it remains unknown to them.”

See Hosino’s art for yourself at Temple Coffee’s downtown Sacramento location (1010 9th Street). It will be on display now through Dec. 12, 2013. Peruse the artist’s Web presence at Erikhosino.com. 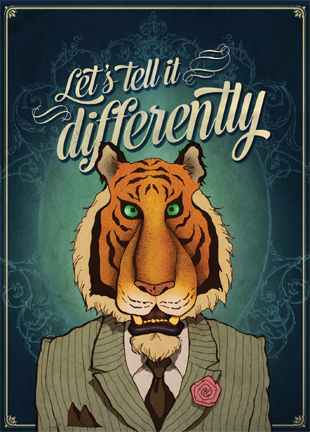