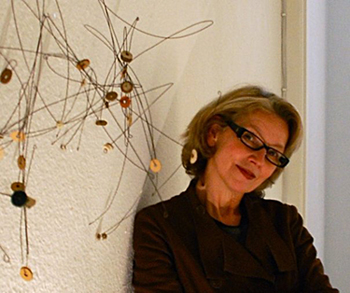 Cheri Ibes is no stranger to the free-form artistic genre that is known simply as installation. Her work has been locally displayed at Block Gallery where she was the director. In 2008, she opened the gallery with an exhibition in January and closed the year with one in December, both of which were strong, thought provoking shows that received positive attention. Her December show was the end of Block for Ibes.

“Block was an experiment to understand how galleries need to be re-conceptualized and what it might mean for installation and new media artists,” explains Ibes. “How we might develop if we actually had a bit of fertile soil.”

Her new installation might not exactly be the “fertile soil” that Ibes speaks of, but what she’s grown inside of Artifacts in downtown Sacramento is worthy of a blue ribbon. Blank Blank Blank, which opened on Sept. 12 and continues through Oct. 3 is a condensed version of Ibes’ work and shows us a much more linear version of her talent that has not been seen before in her previous work where lamp shades floated like jellyfish and light bulbs were amassed like fish eggs.

Black wooden dowels pieced together in angular shapes touch the wall, leave, and then return only to zig and zag to the floor—ending tangled and awkward. These blank shapes, geometric and strange, cast curious shadows on the stark white walls that they are forcefully fastened to. These shadows create new lines that echo architectural constructs and corners, adding new depth and purpose to the tangled formations that created them in the first place. As I observe Ibes’ installation, a woman brushes lightly up against one of the low sitting conglomerates that consist of ordinary white metal hangars that are fastened together by carefully bound string. The mass quivers and the shadows play, adding a new movement to Ibes’ design.

“I bought all these hangers. I fell in love with these frivolous pristine white forms—their estranged familiarity,” says Ibes.

The movement of her white hangars is poetic. Simply positioned but with such a fervor that it’s hard not to imagine your own distant landscape that they might populate. Her artist statement reads, “Hangars, thin white skeletons, spiny arachnids, scurry from a pole out of an imagined closet like hallucinations from a sick bed or flashes from a forgotten dream. They know nothing—and they know it.” 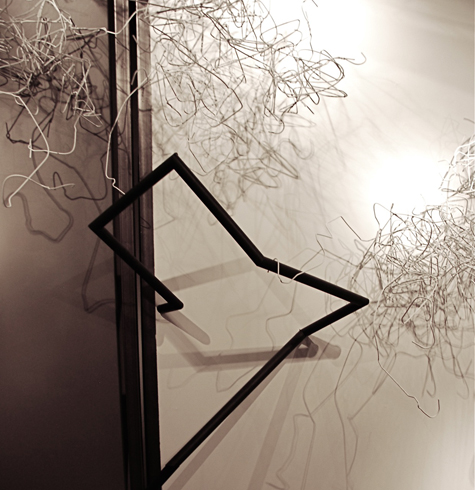 In your installations, Blank Blank Blank, you’ve chosen to use objects like light bulbs, parts of pianos, clothes hangars and wooden dowels. Why these objects? What draws you to one particular object over the over? Is it functionality for the piece mainly or is the decision rooted in aesthetics?
I’m attracted to common things with an intrinsic beauty that is often overlooked because of over-familiarity. I imagine that I have never seen these objects before and have no sense of their function. Function corrupts our perception of these objects so we cannot see their beauty—their wonder really. When I broke open light bulbs and computer keyboards and started deconstructing them, I was amazed to find such enchanting things inside as delicate wire filaments and computer keyboards have all kinds of parts inside. I’m attracted to fragility, but fragility with an edge that can seem a bit threatening. That’s an expression of realism—reality isn’t facile, it’s a mixture often of contradictory concepts and that’s what makes them interesting and makes choices so difficult.

Was it a challenge doing the installation in what is essentially a retail store as opposed to gallery space like Block?
Yes, it was. It’s hard to compete with all the things in the background. Part of the reason galleries always have white walls is to clear out the “noise” of other visual and auditory stimuli, so you can really see the work. Also, installation artists, in particular, are very concerned about the space and having control over it. I knew that would be a challenge, but I prefer this kind of honesty of purpose to showing in a gallery that does the same thing—has too much “noise” by showing too many works of art and placing them too close together so they interact with each other and the viewer has a hard time filtering that out. 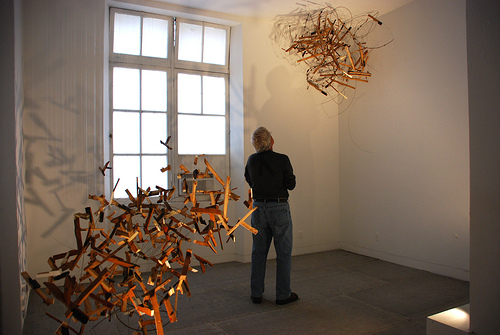 Do you think your sculptures can only exist in a certain space, with the right lighting? Or can they transform as they are moved from one environment to another? Will they lose their meaning?
Actually, that’s one of the differences between sculpture and installation art. Sculpture is less concerned with space—although space is always important to how an artwork is perceived. It influences it in so many ways. But installation completely bows to the primacy of the environment, of context. Although I might use all the elements in this work again in another space, it will never be the same, and there is absolutely no loyalty to recreating it. It is this recognition of zero stasis that fascinates me about installation. Thus, no, it will not lose its meaning—that is its meaning. 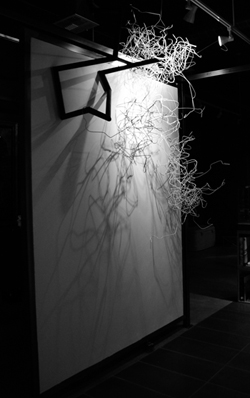 What does the title Blank Blank Blank refer to?
I started thinking about hangers coming out of a closet. Then I saw that the white hanger pieces kind of suggested skeletons, fragile skeleton forms, nerve cells, or plankton, but living. I used that quote from “Canto XIII” by Ezra Pound, a talented insane poetic: “And even I can remember/A day when the historians left blanks in their writings/I mean, for things they didn’t know.“ History has so many secrets, so many folds that we don’t know, or know but don’t really know, or aren’t allowed to know, or are afraid to know, etc. Families and individuals have secrets—blanks in their histories. So I thought of these nervous little skeletal forms as representing the anxiety associated with these secrets and the dowel as representing the closet pole where well-behaved hangers ought to hang. But, secrets are difficult to contain. They have a way of creeping out and creating a subtle underlying anxiety. They are interesting creatures, but they can get tangled in you hair or hook your shirt, so you want to stand a bit back from them. 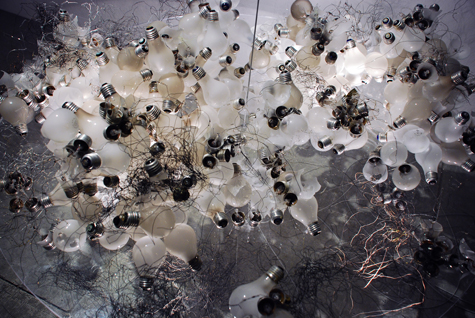 Your press release reads, “To reconcile the irreconcilable—to find harmony between the careless consumption of urbanism and a natural world subject to human infringement.” Can you elaborate on this a little more? What did you ultimately hope to achieve with this current installation?
People have often commented that my work looks “organic.” I didn’t know what to think about that for a long time. But it kept coming out—just naturally, in all my work. So then, I had to finally accept that it must be pretty important. I had to figure out why I was taking these boring, ordinary man-made objects and they were coming out looking like sea life or microscopic organisms. If it happened once or twice, I guess I wouldn’t have focused on it, but it was always showing up and I never made any conscious effort to make that happen. In my life, I have always tried to figure out how we humans fit into the big picture of nature. I mean we’re temporary, small and probably insignificant in the big picture of nature, which existed before us and will doubtless go on after. Our constructs seem so idiosyncratic and so thoughtlessly placed in the context of nature. It’s an odd fit for the most part. So, I think when I take these rather frivolous human made objects and turn them into organic-appearing organisms, I’m talking about that craziness, that trying to reconcile the irreconcilable—putting our stuff next to nature’s stuff. It’s kind of incongruent. 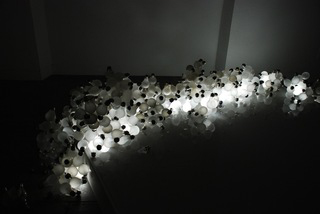 Where does an idea for a show begin with you? For a sculpture?
I don’t begin with the idea of a show at all. I have these weird useless discarded items I play with. I’m curious about them. I do things to them like burn them or soak them in water or break them apart. I look at them. I move them around. I stack them. I lay them on my bed so their objectivity seeps into my subconscious before I eat my Corn Flakes in the morning. Then I usually begin building them as clusters, colonies. I love how their sameness becomes variation, but in a warped way. They become little individuals. I have boxes of slides from two families’ lifetime collections of their vacations that I am playing with now. Already they look like leaves from a tree—so there it is again—that nature thing. I build modules that can be assembled in an environment like mollusks grow on ocean rocks or mold grows on old fruit. 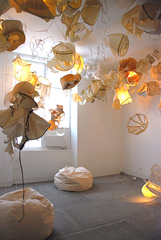