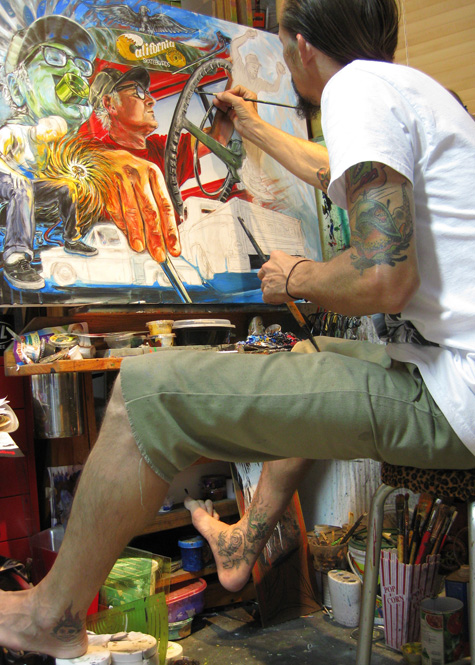 Sacramento artist taps into a childhood obsession for his latest show

Pop art in the ‘60s and a growing critique of consumer culture at the end of modernism led art into an aesthetic of mash ups, parodies and pastiche. Pulp art, comic books, baseball cards and the developments of global branding strategies all collided into Wacky Packs, a series of stickers that mocked consumer goods through parody, produced by Topps Trading Company in 1967, and originally illustrated by Art Spiegelman (writer/artist of the graphic novel Maus) and Norman Saunders. Fast forward 45 years, the influence of these seemingly benign stickers can be found in the artwork of Bruce Gossett.

Gossett’s works have been seen at a few select galleries around Sacramento and sold at various car shows over the past decade, but his current work draws specifically on the playfulness and base impulses of a childhood fascination: Wacky Packs. His artwork follows this tradition of plagiarism and parody, using existing advertisements and iconography from the custom car world to create tongue-in-cheek fine art works that connect an adult world of masculine custom hot rods with the juvenile playfulness of puns and gore.

Gossett has developed his art over the years working with multiple graphic forms, all of which have influenced his relationship to the canvas, his preferred medium. He’s printed T-shirts, rock and car show posters, stickers and done customized airbrushing and detailing on cars. He once tried his hand at stand-up comedy, only to realize he didn’t like the spotlight and has since found his calling in a small, insulated shed-studio in the back yard of his West Sacramento home. Gossett spent years going up and down California, attending car shows, selling his works: T-shirts, posters, stickers, fine arts. And the influence of this culture has been foundational to his development as a graphic and fine artist. 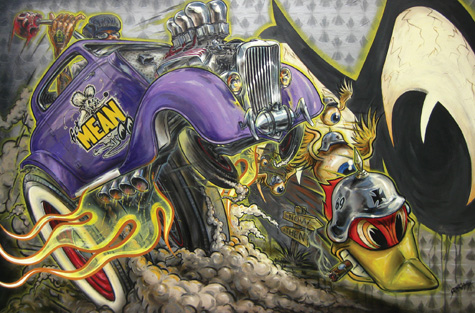 But it’s not just car culture in general that Gossett finds alluring, it’s a specific subspecies of that broader category, those custom car creators, the seedy underbelly of that combination of Detroit automobiles and California counter culture. This DIY renaissance of the automobile, the material object that transported America from farmlands to urban spaces, appears in the work of Gossett as an image set to be appropriated and employed according to a particular set of aesthetics.

These counter culture references are manifest in his current work, the Speed Equipped series, which will be shown for Second Saturday in October at So-Cal Speed Shop on Del Paso Boulevard. The Speed Equipped show focuses specifically on parodies of logos for hot-rodding companies like Moon Speed Equipment, from which the show takes its name. Gossett has created a set of produce brands with the low-brow humor of those Wacky Packs, and he has even been tapped by Anti-Hero Skateboards and local John Cardiel to create the artwork for a pro-series of decks. Gossett’s works span multiple culture groups and as such he’s a significant contributor in the battle against bourgeois ideals and high-art. He’s a working class artist, and that’s just why we like him. 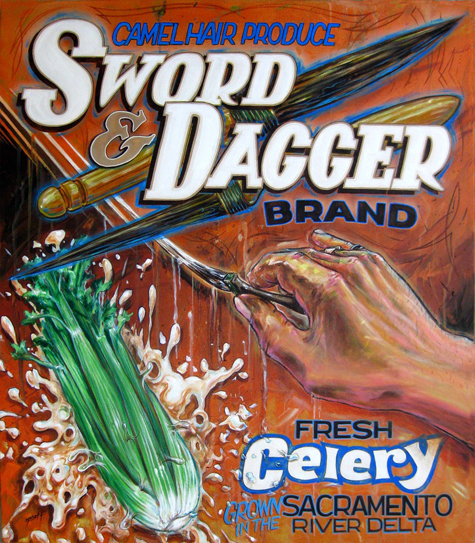 Tell me about your new show, Speed Equipped.
I was obsessed with Wacky Packs in the ‘70s. They were parodies of national products. You know, household products, Windex and stuff like that. They basically mocked them and made fun of them. They were stickers in chewing gum packs. I remember kids covering their closet doors with them, much to the chagrin of their parents. I got obsessed with them. It was funny. The imagery was so base and crude, like it was painted with a broomstick or something. The humor was just great.

Finally, I thought about it one day, and I’ve never seen parodies of the speed equipment. I’ve always been immersed in the car thing, and I thought why not make fun of the icons of the rod and custom world. It’s something I’ve been working on over a two-year period. I’d like to get them out there and get them seen. I think there’s a generation that grew up in the ‘70s around Wacky Packs, skateboarding, punk, irreverence and that audience totally would get it. 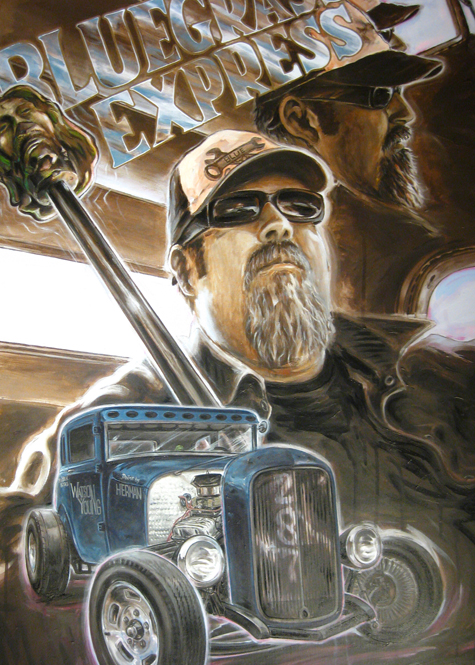 Can you explain how that series is different for you? How it’s a change of direction from your previous work?
The Builders Series is more photo-based. Sometimes it’s the vehicles they build, and I’ll focus on that. Other times I’ll start introducing images of the builder, so it’s a little more personal. It’s difficult, painting portraitures and capturing likenesses. It’s more representational, photo-realistic, but I’m making them psychedelic, lots of drips, lots of maneuvering of the surfaces so that you know it’s a painting as opposed to an airbrushed, photo-realistic work.

What’s the best and worst parts about being an artist?
Being locked in the studio is boring, frankly. There’s nothing more I’d like to do than be in the studio for 10 hours and paint. But by that eighth hour, I’m probably pretty sick of it. The days are weird. There are times when it’s fun; there are times when it’s work. I think I like the beginning and the end best. I like when it hasn’t been touched and I first lay in backgrounds, working from the rear forward. You’re establishing a mood when you first start, so it’s fun. Anything is possible. And in the end, it’s always nice to finish something. You’re happy it’s out of the way.

Once I finish something, I don’t want to look at it for a while. Then a week later I’ll obsess over it for about a week, and then I’m usually pretty good with it. For that reason I always have half a dozen paintings going at any given time. 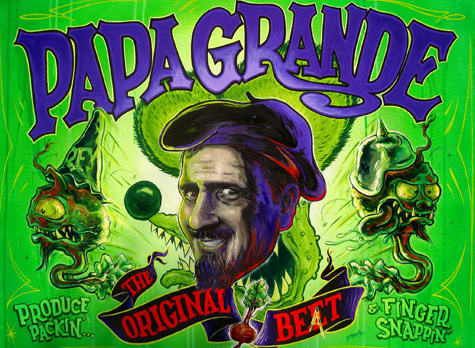 How do other forms, graphic design, T-shirt printing, etc., influence your work?
These are like complex graphics really. My knowledge and experience over the years from different industries, sign painting, pin-striping, graphic applications for hot rods, on vehicles, I get a lot of influence from those other forms. To produce really clean graphics you work rear forward. Do your infill colors and then hit the black lining. It’s really the cleanest way of producing stuff.

When did you decide to take your artwork seriously?
After about the first year, I took it seriously. I started in 1989. I’ve always designed stuff and did things with paint. We stole Testors paints from Thrifty’s and pay for a ten-cent ice-cream cone, and we’d customize our skateboards. I’ve always been around cars, my family was in the car industry. I wanted to get away from it, so I actually tried my hand at stand-up comedy. That didn’t go real well. Then I took a class at City College, the material was stale but I took to it real easy. I realized not only that I had an aptitude for it, but that I enjoyed it. And I was useless in other areas. I just had a short attention span, and the art thing seemed limitless. It really took off in the mid 90s when I really started pursuing more of a car based or an automotive bend. 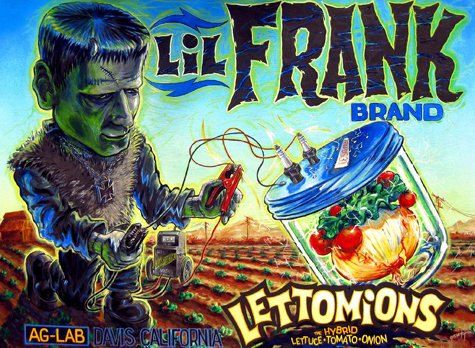 What is it about cars and hot rod culture that you find so alluring?
I’ve always had old cars. My first car was a 1972 Chevelle I fixed up before I had my license. It seemed like a meathead world to me. You’ve got to understand the ‘80s. It was the dark days for this car thing. There was a renaissance in the ‘90s, and I got introduced to Big Daddy Roth and that whole world. It was like the thinking man’s hot rod. It was the Bad News Bears, and I missed that from when I was a kid. I realized there were these weirdo hot-rodders, and it totally clicked with me. I decided to get back into it. I built a few cars. I just jumped in.

Even if it doesn’t have cars, I still call some stuff hot rod art. It’s just got an aesthetic. Even a portrait or something, just the way the paint’s moved, it screams hot rod to me. I like a lot of aggression in my art, a lot of action and movement. 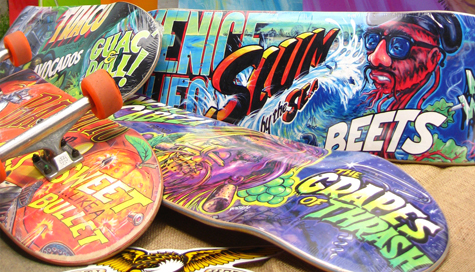 How’d you get hooked up with Anti-Hero Skateboards and John Cardiel?
Cardiel saw my Fresh Ripe and Delicious show at A Bitchin Space. He saw the preview in the University Art window, and he totally got it. He totally remembered the Wacky Packs. He said, “I’ve got six riders and I want you to personalize a piece for each one.” I got where each rider was from, their hometown, where they were born. I did a bit of research and developed ideas. It was crude, tounge-in-cheek, vulgar, but it was a skateboard company, no holds barred, and he totally got it. He’s a squirrel; he’s cooler than shit. It was the most perfect client you could ever ask for. 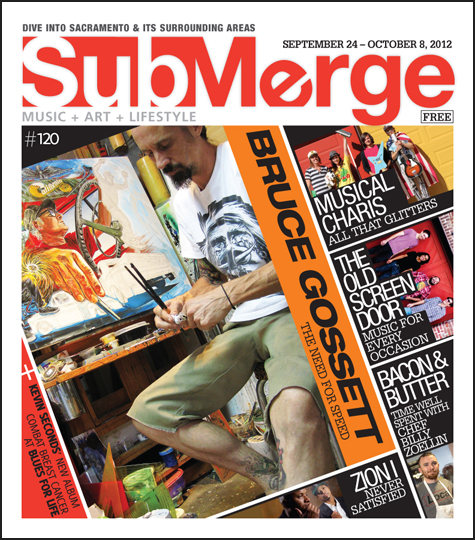 Bruce Gossett’s Speed Equipped opens at So-Cal Speed Shop in Sacramento on Oct. 6, 2012 from 4—9 p.m. The Second Saturday reception will take place the following week, Oct. 13, 2012 from 5—10 p.m. While there, check out a preview of Gossett’s Builders Series. For more info, contact Gossett via http://www.facebook.com/BruceGossettStudios.