Zen and the Art of Graffiti: Few & Far celebrate five years together with an epic block party

I’ve lived in Sacramento long enough to appreciate the cues of an impending summer: fewer clouds, a lessening need for a hoodie while running out the door and sighing at my car when I see that it’s covered, yet again, in a layer of yellow dust—but smiling when I realize that so is everyone else’s (pollen: the great equalizer)—and of course, there’s the sheer joy of living in a city that’s just fun to walk around. We have no shortage of great coffee shops, bars, restaurants, boutiques and art galleries to color our adventures around this fine town, but perhaps my favorite part of this season and its agreeable weather is that I get to stop and appreciate the … graffiti.

That’s right. Whether you noticed or not (we’re pretty sure you did), we’ve got some impressive art on these streets, beautifying what would otherwise be gray buildings and drab alleyways. If you’re like me, you might’ve wondered where these pieces came from, who dreamt them up and why? Who were the voices behind these pieces of art that give Sacramento its charm? Well, a few of those voices go by the name Few and Far, a crew of all female graffiti artists, and they’re led by one fearless tornado of a woman, who goes simply by “Meme.” 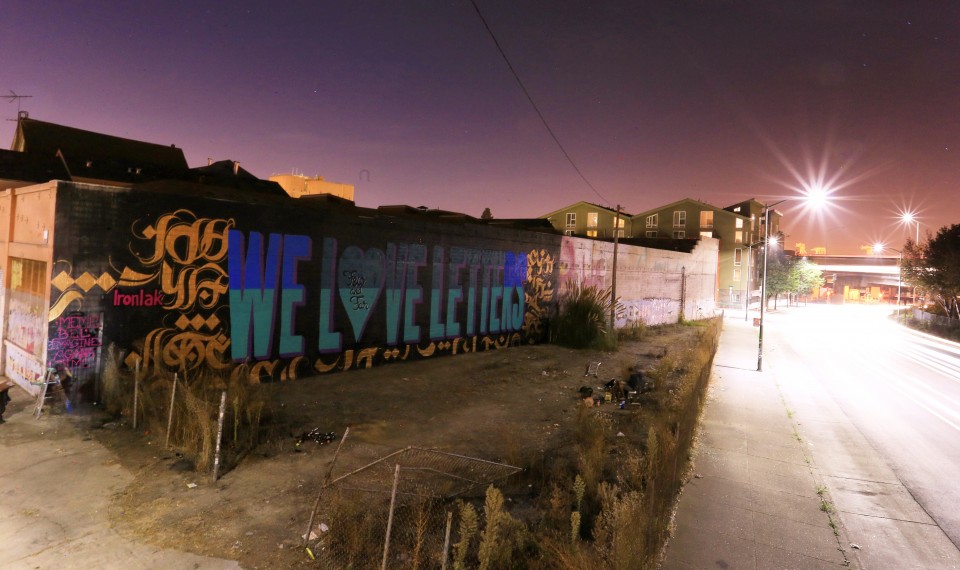 I caught up with Meme to chat with her about Few and Far’s upcoming Fifth Anniversary Block Party, where she and more than 20 of her fellow women crewmembers will repaint their mural on 24th and S streets. We met up at my favorite local coffee shop, and I was immediately drawn to Meme’s genuine smile, energy, and the fact that she ordered the same drink that I always order. She was also willing to immediately give me a hug—I knew I was in good company. We sat down, caffeinated ourselves and talked about how she and a few of her friends spearheaded one of the only all-female muralist crews in the world.

After being raised by a mom who had a full-time job, cooked, cleaned and installed all the tiling and sheet rock in their house, Meme learned from a young age that women were not limited by their gender roles in the least bit. Her mom even gave her her first skateboard, which eventually led Meme to discovering the world of street art. At age 17, she dropped out of school, moved out on her own, got a job and decided to embrace the art of tagging.

“I just said, screw it, I’m going to skate and tag stuff,” she admitted. 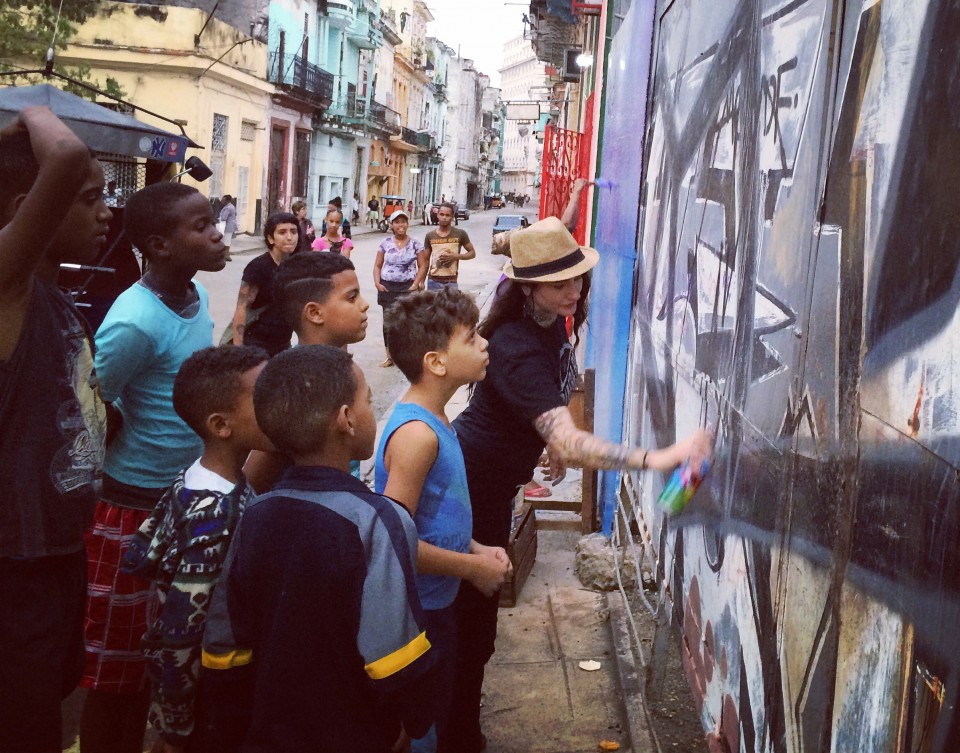 She said that she enjoyed writing her childhood nickname, “Meme” over and over, with her lettering and painting skills improving over time. She wasn’t a great reader and could barely write her actual, full name. That did not stop her.

“I don’t want to say I’m not a good artist … but I feel there’s so many great ones out there and I’m more of a letter artist,” she says. “I guess my play in all this is I’m the organizer. I’m the fire.”

The flame was ignited back in 2011 when Meme organized a mural in industrial Oakland, all with the simple goal of celebrating graffiti and street art made by women. Along with her friend, they coined that wall Few and Far, because it turns out there just aren’t that many all-female graffiti crews out there; they are “few and far between.” In fact, there are two: the Stick Up Girlz in New Zealand (now defunct) and Girls on Top in the United Kingdom. Few and Far makes three. 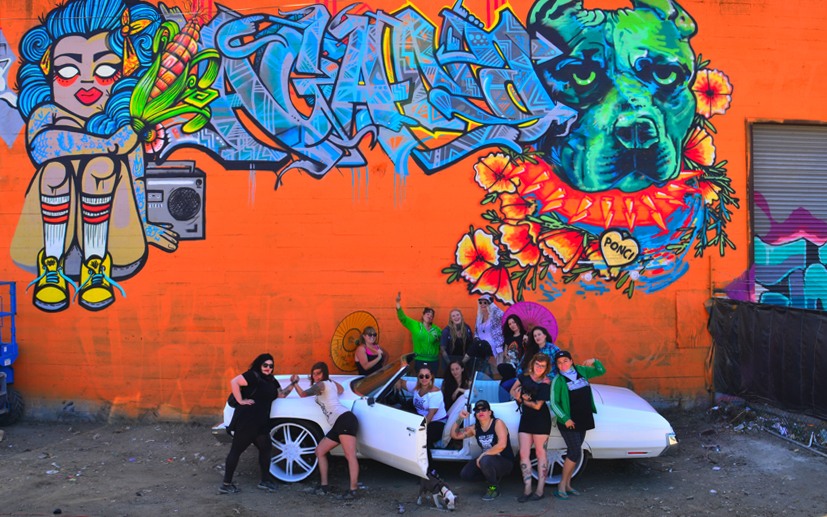 The “crew” is made up of more than a dozen women that Meme has met on the road, at art shows, and even Instagram—all from varying backgrounds and countries. From Sacramento to Miami to Nepal, over the past several years Meme has recognized the importance of offering these women a place to express their art through mural painting, and that there’s power in numbers.

“If they group together, they feel stronger,” she says. “That was the main idea. It doesn’t matter if they’re male or female, I just want to see people do well; I want people to see what I see in them.”

One of the regular Few and Far gals, DELVS, said it was exactly that energy that magnetized her to join the crew. “My art always showcases women in every aspect. I was born and raised in Miami, and being I am Hispanic, my art reflects Hispanic women and their point of view,” she says. “My characters are voluptuous, outspoken and confident. Few and Far is always looking to empower all women, of all cultures. We want to help create awareness. That was always my focus as well.”

Ursula Xanthe Young, another crewmember, says she’s been with Few and Far since 2011. She’s painted murals in Miami, Richmond, Oakland, and San Francisco, to name a few.

“I didn’t know any of the women before I started painting—we all come from different backgrounds and places, which makes getting together with them and creating large-scale projects together all the more exciting … It’s always a fun time, and inspiring to be a part of these massive all-girl productions.”

Every year, over a dozen Few and Far crewmembers get together to live-paint a large mural in communities across the globe. On June 4, they will reunite to add on to their existing mural on 24th and S streets in Midtown, near Racks Clothing Boutique, The Round Corner and Big Bang, among other supporting local businesses. And if you’re like me and you were wondering how the businesses really feel about these murals? They love them, and chances are, they were the ones that asked the artists to create them in the first place. Perhaps business owners have come to appreciate the way a great piece of art can not only make an ugly gray wall more aesthetically pleasing, but can also make people feel nostalgic and remind them what it’s like to be a kid, mesmerized by art fueled by imagination and creativity. 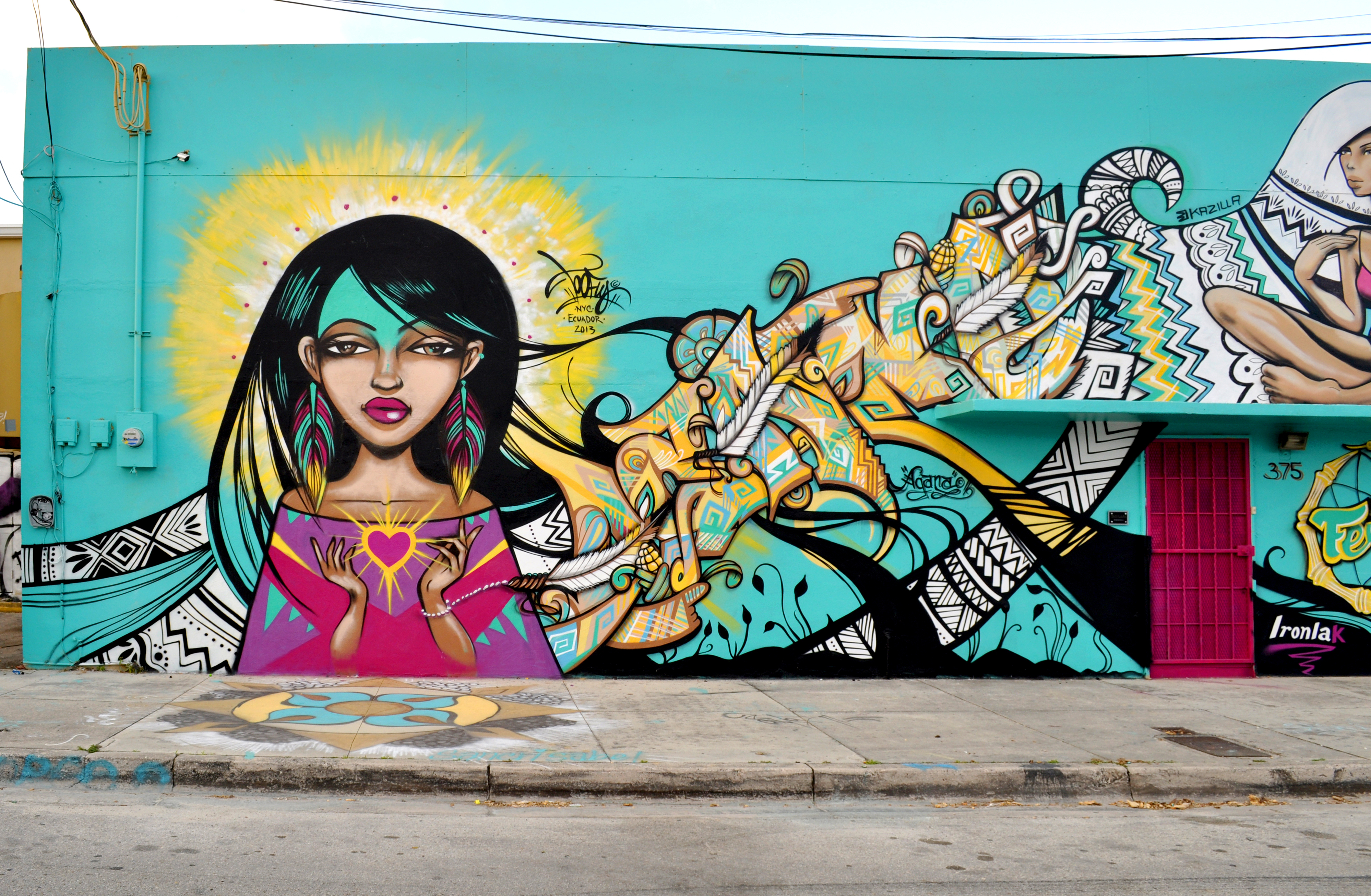 “People to this day still ask me, ‘when are you going to grow up?’ and I’m like, I’m not going to have children, I’m going to be a skater until I’m 60-something, and I’m going to paint murals until I’m an old lady—that’s just who I am,” Meme says. This is the philosophy she brings to her crew; she believes that everyone should have an outlet to express themselves and be appreciated without negative influences.

“You don’t even have to be that good of an artist,” she continues. “If you get permission to do a wall, go paint it! You never know what you can do … the self-confidence that comes out from that—no one else can feed you that. Being able to do things in an expression—whether it be a biker, or runner, or skateboarder, or making coffee—that gives you confidence into being the best type of person that you can be.” 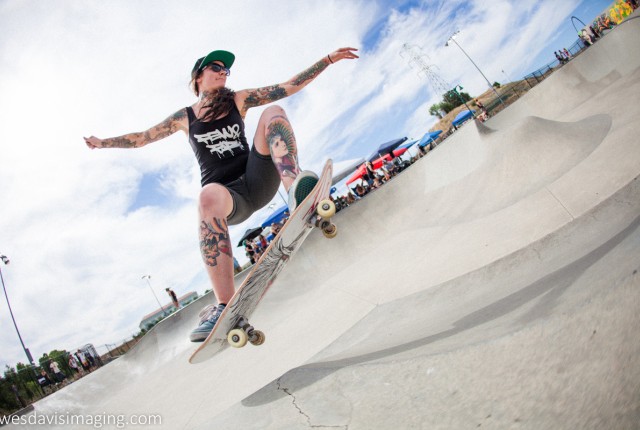 So what does Meme do when she’s not painting? She’s running the organization, creating content for their social media accounts, fundraising for supplies (their expenses are all out-of-pocket), and she also has a side project in conjunction with F&F called the Sisters of Shred, which is a way to bring women skaters of all levels together for skate jam sessions. They’re having an event June 11 at the Power Inn Skate Park. She also teaches kids how to skate and works a day job. I ask her how she has time to fit it all in. “I work very hard. It’s a challenge. But my heart is in it, I’m never bored with it … I have an endless amount of energy to do it.”

Now if you’ll excuse me, I’ve got to go brush the dust off my World Industries skateboard. Meme swears that it’s never too late to learn, even for a 30-year-old with a gravity problem. “You can do anything!” She says to me, genuinely, and I believe her.

Check out Few and Far’s Fifth Annual Block Party on June 4 from 10 a.m.–8 p.m. at 24th and S in Sacramento. There will be a DJ, local vendors and the event is free to the community. Check out their website (and donate!) at Fewandfarwomen.com, @fewandfarwomen on Instagram and Twitter or Facebook.com/few.and.far.women.

Check out the Few and Far murals around Sacramento:

5th and T / U streets alley

18th and I streets (Maverique salon) 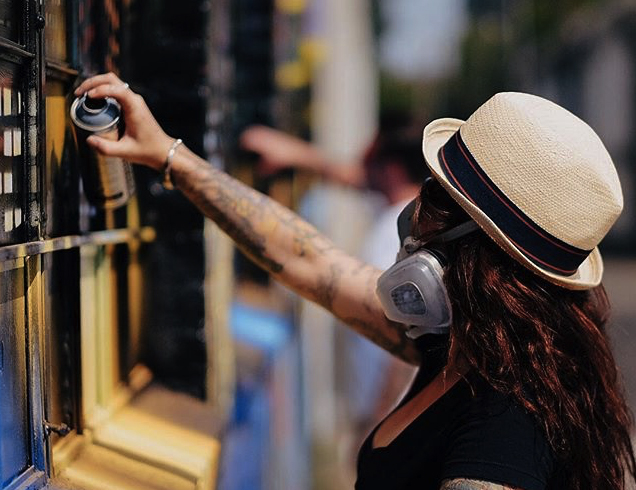