From Graffiti to the Gallery 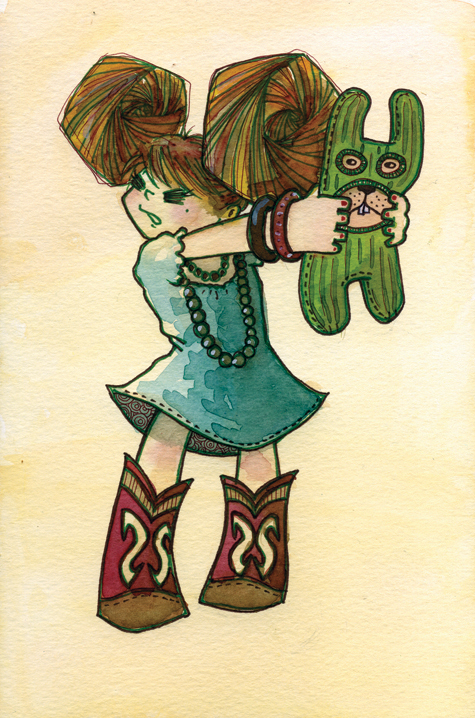 Though there haven’t been many dry days so far this year, there are far worse ways to spend a Saturday night than strolling around the city and perusing the works of different artists. Second Saturday provides Sacramentans with the opportunity to do just that, with galleries through out the city staying open late to receive guests as well as host artists whose works are on display. The next Second Saturday will take place on February 9th, and two artists you’ll be able to familiarize yourselves with are Joseph “Bron4000″ Molina and his wife Ayami Suzuki-Molina, who will be showing their work alongside Bradley Platz and Josh Heilaman at SaraJane & Co. at 908 21st Street in Midtown. The San Francisco-based Molina (with a little help from Ayami) answered a few of Submerge‘s questions regarding the couple’s upcoming gallery show and his artistic background.

I saw that you and Ayami Suzuki had done a show together at KidRobot in San Francisco. The two of you are married, correct? How did you two meet?
Bron4000: Yes… to each other. I tugged at the red string tied to my pinky and her pinky happened to be tied to the other end of it. She’s a Molina now.

What are you bringing to the show in Sacramento? Is it different than last year’s show at KidRobot?
Bron4000: A little bit of this and that with some of those over there. I would like to think the new pieces are different from the KidRobot show. I would hate to be that “stuck artist”… too many of those. I might revisit an idea or two and flip it. After the pieces are hung… my opinion gets thrown through the window because it’s up to the viewer to formulate there own interpretations so, I’ll leave that up to y’all to decide.
The show at SaraJane & Co. in Sacramento also features the work of Bradley Platz and Josh Heilaman. Are you familiar with both these artists’ work?
Bron4000: I am now.
Ayami Suzuki-Molina: Me too.
Both at the same time: Interesting.

From what I’ve read, you were involved with the graffiti scene in San Francisco. Is this how you got your start as an artist?
Bron4000: I actually got into art from cartoons and Marvel comic books. John Romita, Sr. plus [John Romita] Jr. equals magma loogies. Graffiti had always been around, but it wasn’t until about ’82 when I caught my cousin doing it. Then I started to differentiate gang stuff from the dope shit. Thanks Swaz1er! Then I started biting folks like Dondi and Vaughn BodÃƒÂ©. I got foundations in San Francisco, but it was when I was living in Sacramento that I started to refine my stuff and began to get more notice.

How has the graffiti scene in SF changed since you’ve been involved in it?
Bron4000: Same baloney, different bread. Including myself at times. One thing I can’t stand is the hipster graffiti heads… 85 percent of them.

Had you always had designs to move more into the fine art realm?
Bron4000: I guess so… What I do love is the creative process—the more outlets, the better. The transition from graffiti to gallery is tough, because once it’s on a canvas it’s no longer graffiti. I would love to make that fine art money, though.

Looking at the characters you paint, I see a lot of different things in them—from pop culture icons to perhaps a bit of an anime influence—and they have a sort of cartoon-y feel. Did you watch a lot of cartoons growing up? Do you still? If so, which ones do you think had the biggest impact on you as an artist?
Bron4000: Adult Swim. I wish it was on all day, but then I might as well get into Star Trek. Voltron, Tranzor Z, RoboTech, Transformers… whatever. I even watched The Snorks, Paw Paw Bears, Black Star, She-Ra, fuck it. Nowadays I like Aqua Teen Hunger Force, some SpongeBob and Ben 10. I don’t like the new Teenage Mutant Ninja Turtles. Saturday TV Fun House. Hell yeah … I think the writing in those cartoons is genius… even those old racist ass Warner Brothers ones. Droopy Dog was a pimp. South Park is kingin’ ’em all… Butters for Prime Minister! My wife being Japanese has nothing to do with any anime influence.

I saw that you’d done a vinyl figure for the KidRobot show. Is this something you hope to do more of?
Bron4000: Yes, I think I might have one for this upcoming show hopefully. I actually like painting those things because it’s 3-D. We’ll see…

When I was doing some research on you, I saw that your name also came up in regards to music. Do you also record? If so, how would you compare that creative experience as opposed to your artwork?
Bron4000: At times you can find me behind a mic, but not as much nowadays. I still keep writing rhymes, though. Gotta keep the sword sharp. Addict Merchants …yehbebeh. Music is more therapy for me. My focus has always been to paint. As far as the creative differences … with a band, it’s a give and take because there are more entities involved and you can only move about within certain perimeters without causing a conflict of ideas. It happens. You can only let so much out before the collective thinks you’re nuts. 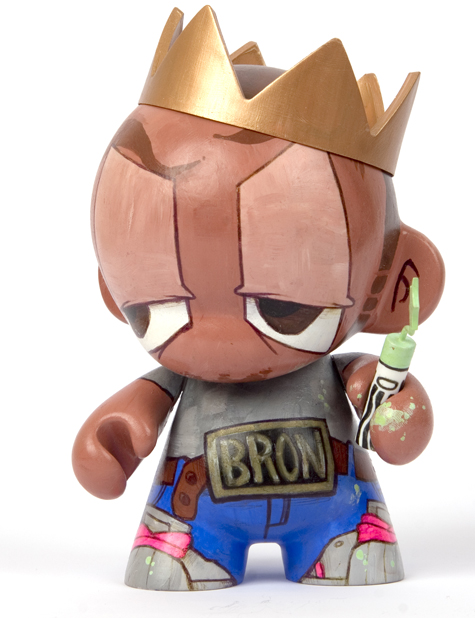