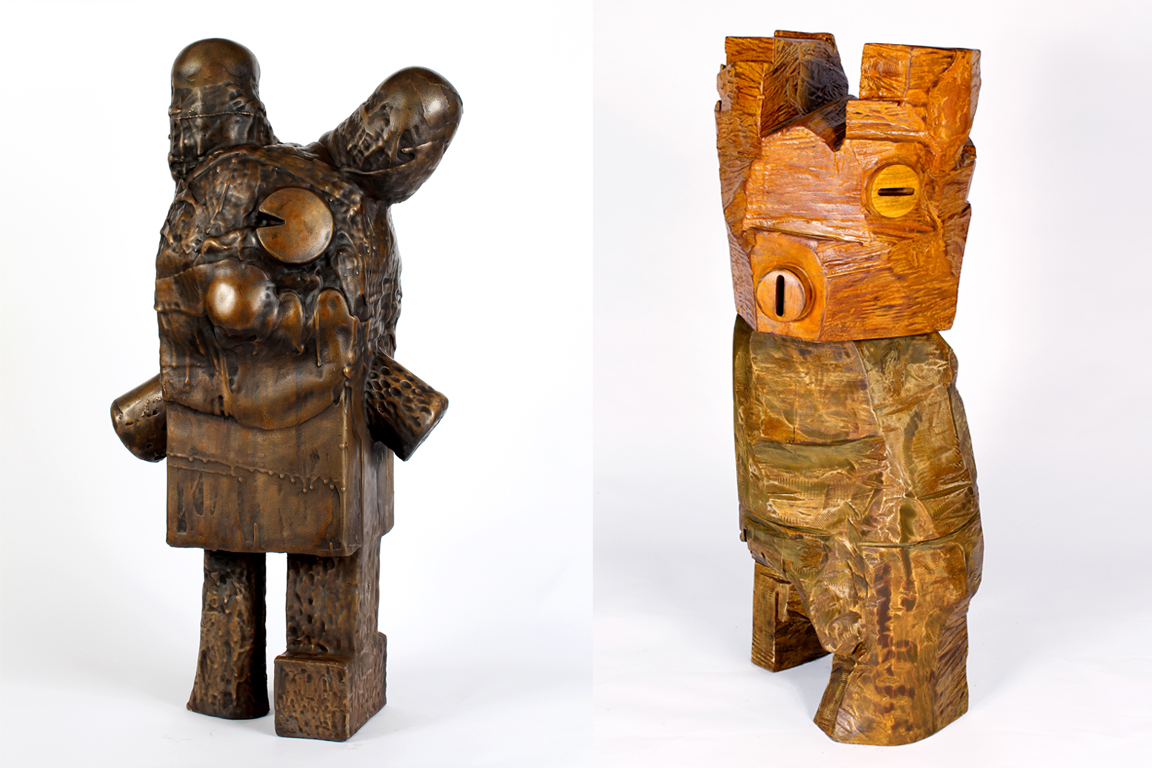 Some months ago, longtime Sacramento artist Gale Hart reached out to friends to see if anyone knew where she could find some good pieces of wood. A few suggestions later led her to the Twin Rivers Housing Project (historically known as the Dos Rios Homes Housing Project) near Richards Boulevard, where redevelopers had hacked down antique trees in order to make way for the construction of new units. While some of the trees were donated to the Sacramento Tree Foundation, others, to Hart’s luck, remained at the site of their dismemberment.

Armed with a chainsaw, Hart pulled up to the site in her trusty van. It was one of the first times Hart had even ever used a chainsaw, but like with many power tools she uses, operating it almost seemed natural. She hacked up a bunch of the leftover wood, loaded it into her ride and returned to her V Street studio.

“It was unreal how beautiful all of the old trees were in that spot,” she said. “I wondered why the developers couldn’t work around all of those massive, old, beautiful trees. I guess the tragedy in it all became an inspiration for me.”

This wood would later become the central focus of Hart’s new show at The Urban Hive art gallery titled: Splintered. 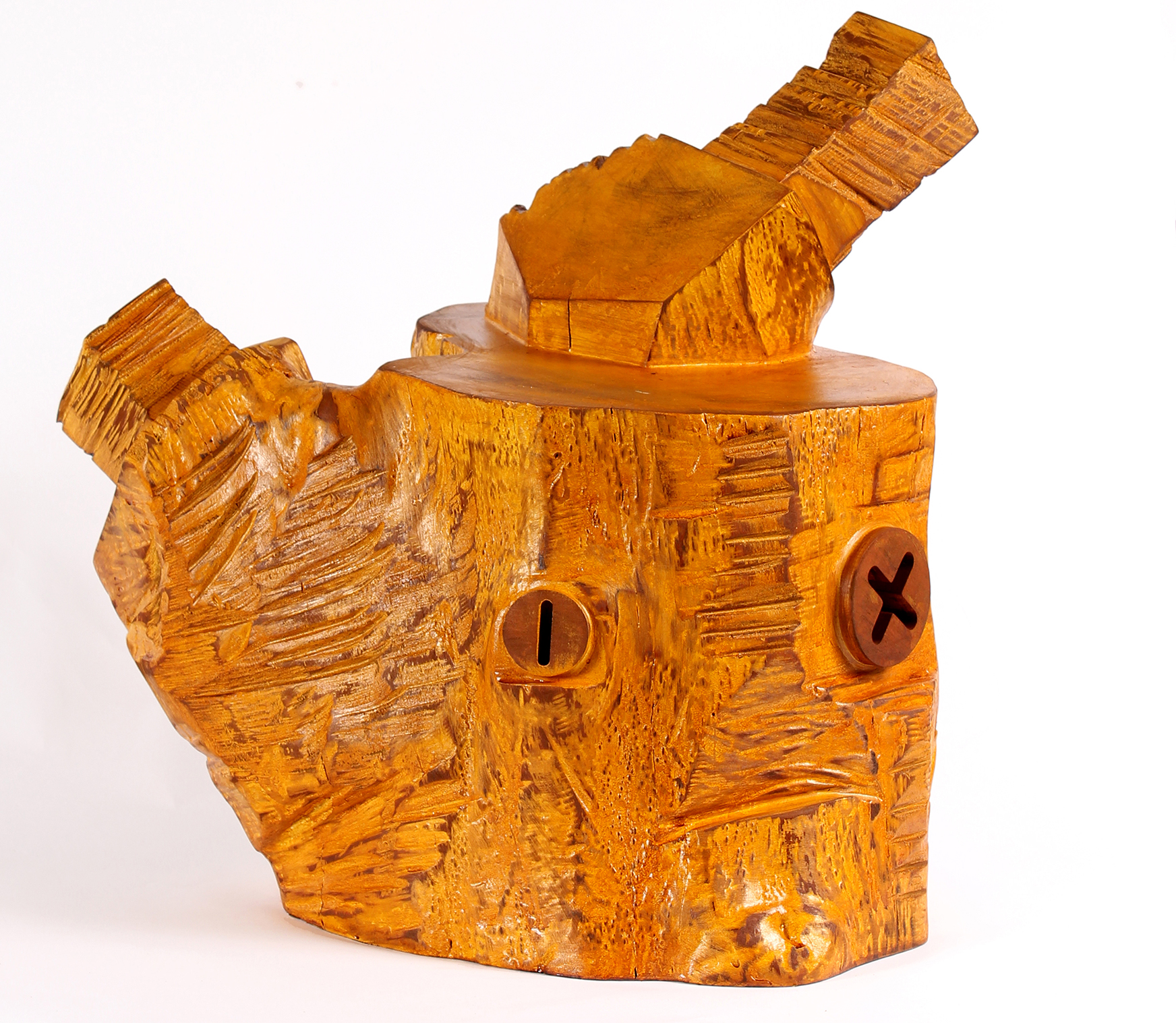 Splintered is a collection of wood sculptures and paintings, with many of the sculptures paying homage to the imperfections of the wood and its associations with the physical and social world. The exhibit is intended to be thought-provoking, expressive and at times fun. The show is inclusive of a little bit of everything that Hart has worked on in her career. There is a little about guns, a little about animal rights, a lot of mixed materials and diverse forms of craftsmanship. The artist will present never-before-seen paintings in addition to her sculptures.

Hart said that she tried so hard to not make her work political for this show, but she quickly realized that her work was less a recognition of political figures, rather than the actual barriers of unity. “The fact that we are divided has influenced much of my work,” she said. “I tried to keep the show non-political, I tried so hard. I found that that was impossible. It’s impossible for me as an artist not to say something about this. No, I have not been inspired by him, but I am more inspired by the divisiveness of the country. The work in the show has some comical angst components to it.”

For her smaller paintings in the show, Hart worked with some form of television playing loudly in the background. Usually, painting requires her to work in intimate silence with her canvas, but to garner influence from the noise of the world, she allowed the influence of the television to seep into her work. These will be displayed in her show.

This is the first gallery show Hart has done in Sacramento in six years. She has mostly been exhibiting her work out of state and focusing on local public art displays.

“Once I saw the space that The Urban Hive gallery had, I knew that I had to show there. This is the first time I’ve had a showing in Sacramento in years, and who knows when I will do one ever again. I forgot how crazy it all gets,” Hart said through nervous laughs.

At the time of this interview, Hart was still working hard on pieces for Splintered, running on nights of no more than three hours of sleep. Like much of the country, she admits that she had been distracted by the capture of the East Area Rapist. She had been following all of the coverage and thinking back on her own upbringing in Sacramento during those messed up times. 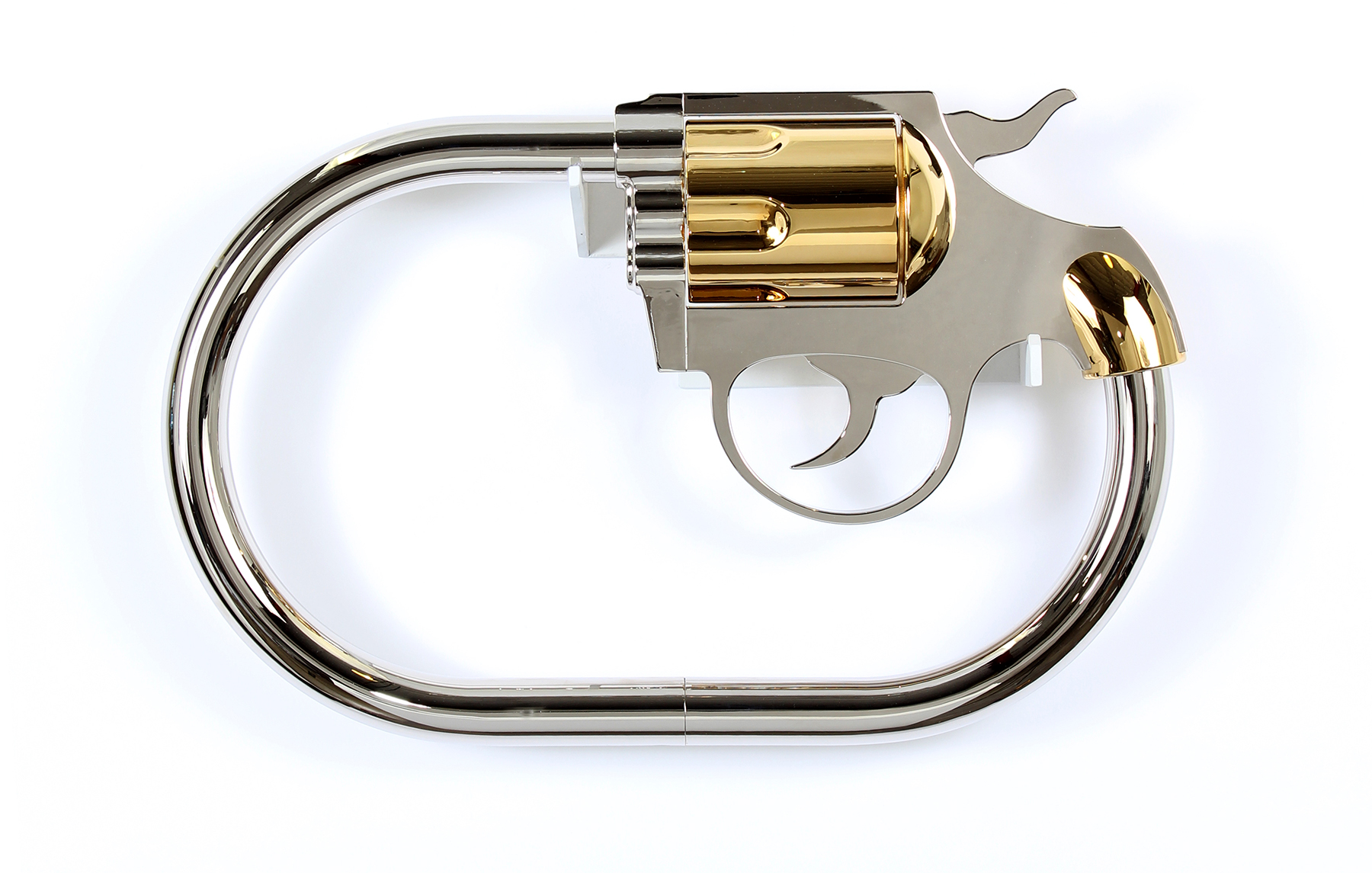 “It has been nuts, and you can’t help but relive those times in your mind,” Hart said. She was a teenager in Sacramento at that time of the East Area Rapist’s crime spree.

Hart has seen the area go through so many transitions in the many years she has lived and created here.

“Sacramento used to be so janky and amazing because no one was here,” she fondly remembered, “but it has changed so much. I don’t like it and I don’t dislike it. It’s just progress. What are you gonna do?”

She went on to say that she hopes artists will continue to have a place in the new central Sacramento landscape because, “They’ve worked on this area for years and years, and they are the reason why downtown and Midtown are so desirable and cool.”

As a young artist, Hart split her time between skateboarding down the streets of Midtown to cruising across the country in her van, partying in the parking lots of Grateful Dead concerts and selling trippy skull drawings to Dead Heads.

While she maintains her roots as a true Sacramento artist, Hart also has a part in the area’s biggest redevelopment project: the Golden 1 Center. Ever wonder who the eff placed that massive, random dart haphazardly in the middle of the sidewalk on 5th and L? Wonder no more, because it was Gale Hart herself. 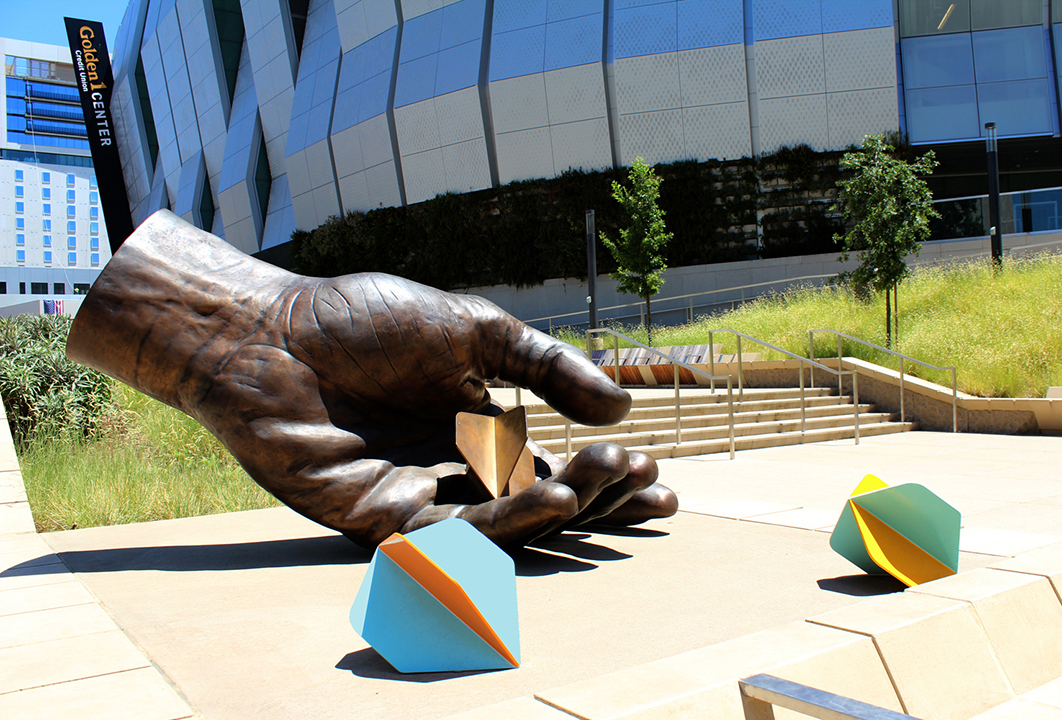 The bronze, cupped hand that is central to the L Street entrance of the arena, as well as the curiously scattered darts are all Hart’s doing. She was given the project and asked to “activate L Street” with her art by project planners. Assuming her true role as both artist and critic, Hart embraced her assignment with the perfect mixture of both. The seemingly random placement of each dart is intentional; they are supposed to be aiming at a target that may not even really exist. She said that when thinking about the arena and all of the controversy surrounding it, she couldn’t help but wonder if Sacramento was missing the mark with its new entertainment complex or if anyone really knew what that mark truly was. It seemed like everyone had a different opinion of the Golden 1 Center and its purpose.

She used darts because she thought that darts were representative of a relatively pure leisurely sport that wasn’t completely changed by money and corporate sponsorship. Her public art display that graces the grounds of the Downtown Commons is both supportive and critical of the change and progress brought on by the arena. What’s most interesting about the piece is that it is still unfinished. Hart awaits the installation of a few more darts, whose placement she is keeping under wraps.

Hart is also known lovingly as the Godmother of Contemporary Art in Sacramento, a name that she wishes would go away, unless, she said, “It means godmother as in godfather. Because that would be something more fitting for me. I do get that it is supposed to be telling of my nurturing nature though.” 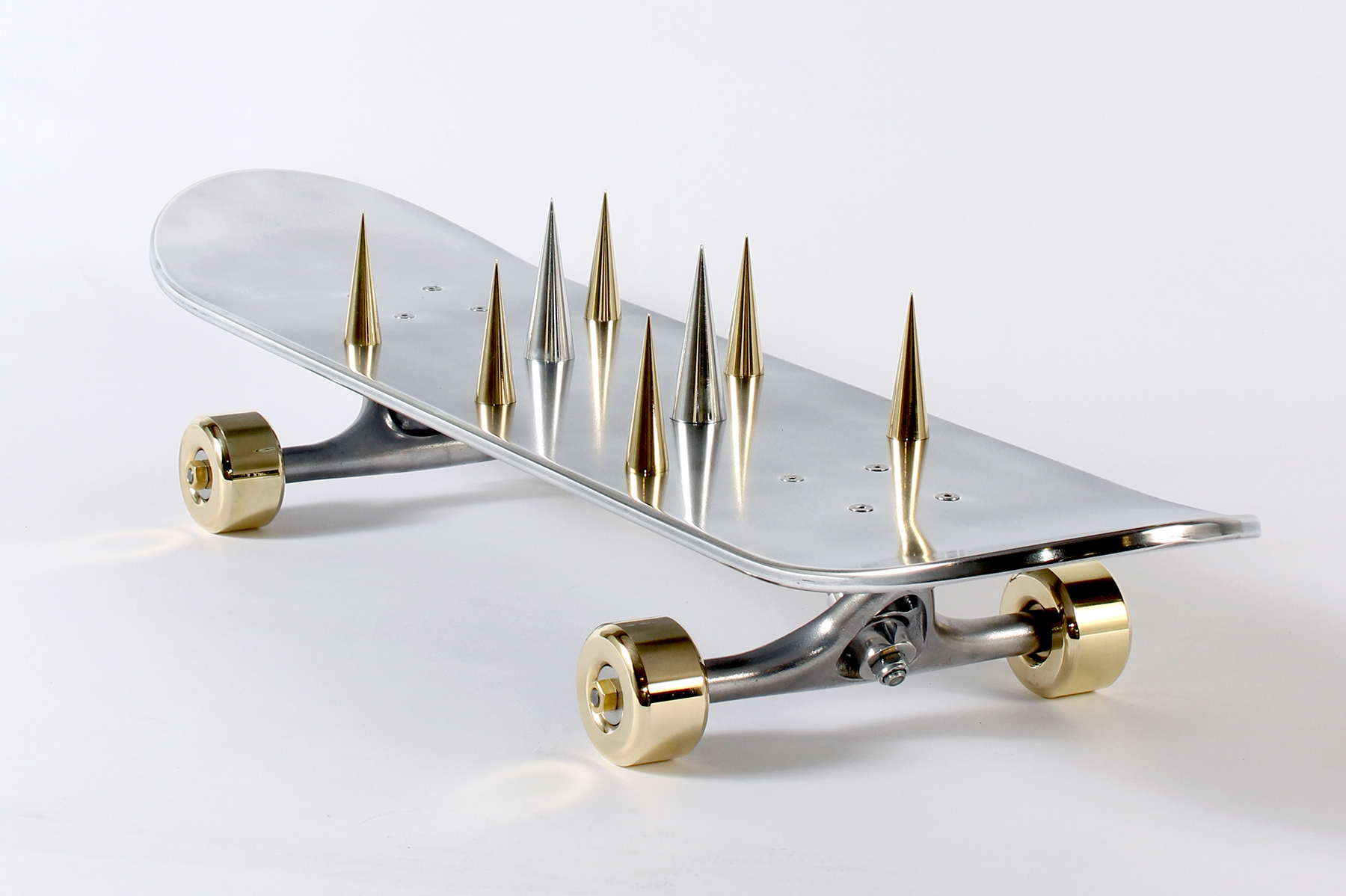 She loves to support other local artists, so this time around, artsy goddess Franceska Gamez will be collaborating with her on a few pieces and showing some stuff of her own as well as part of Splintered.

“I wanted to do a generational thing and give a nod to someone who was up-and-coming and who I see as only getting better,” Hart said of Gamez.