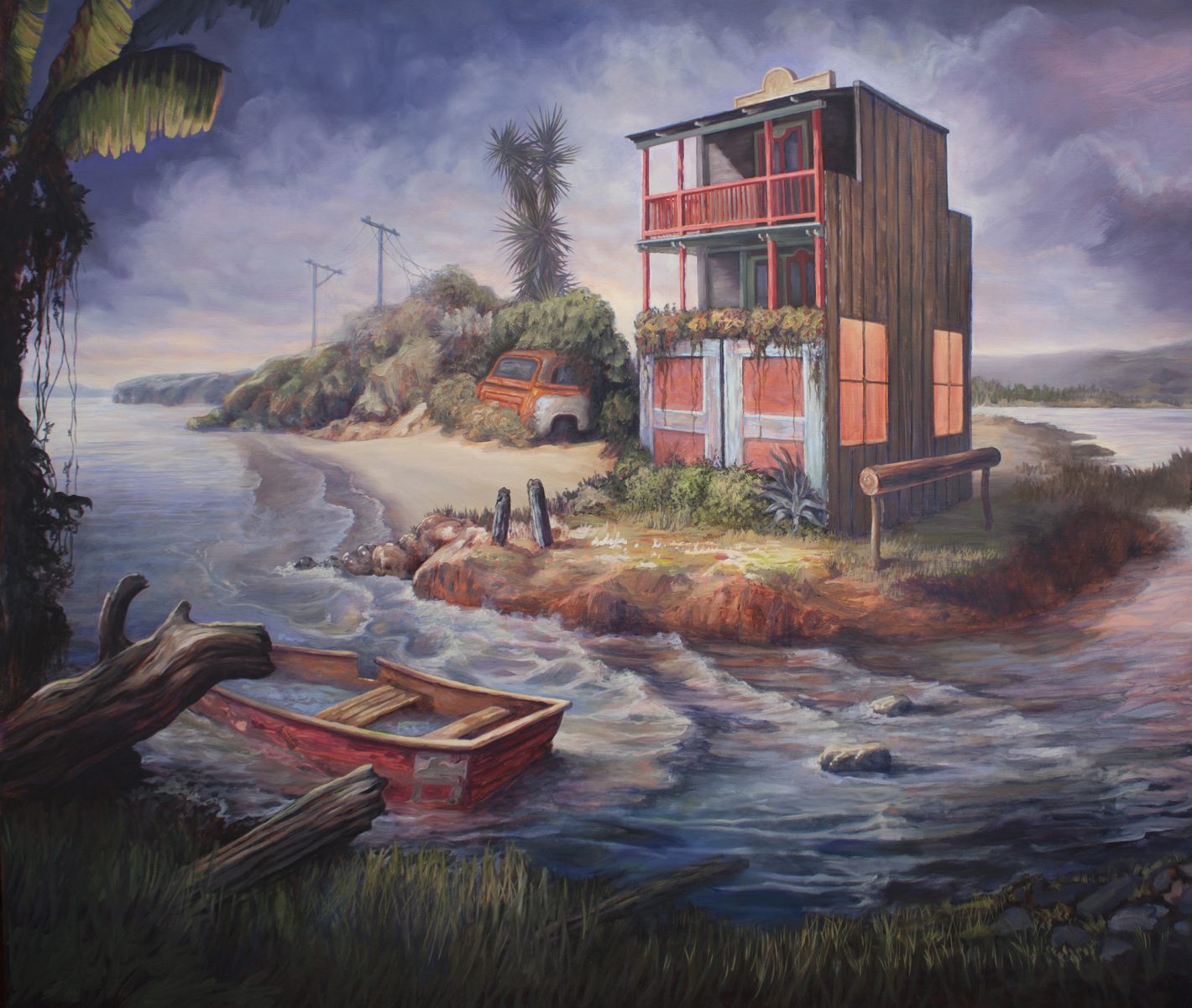 Growing up in San Anselmo, Guston Abright chose to paint as a way to “rebel” in his creative home.

While describing his roots, the Bay Area artist details, “I grew up in an artists’ household. Both my parents are ceramic sculptures and my brother creates with glass.

“I think as a way of rebelling against my artist parents, I became a two-dimensional artist instead of a three-dimensional creative,” he continues. “I’ve always grown-up around the local art scene and the studio craft movement, so all that stuff plays into the work I make. I think that I’m making representational work in part because that is the sort of household I grew up in. We’ve [Abright’s family] always been interested in the figure and the narrative in place.”

In his latest series, “Tremors and Tides,” Abright depicts a newfound appreciation for Northern California’s earthly details and landscapes. His new work takes viewers on a visual journey through the anxiety and beauty that is both precarious yet admired in the Bay Area’s natural infrastructure. Colorful palettes coat familiar outdoor settings: towering architecture, wave-shaped bluffs, greenery reminiscent of redwoods while reds and yellows allude to myriad homes in the region. The bluest of water also flows throughout each piece’s dense population or lurking seclusion.

Submerge caught up with Abright to chat about the overall themes of his recent contemporary paintings, and to discuss his thoughts on architectural developments specifically in Northern California. He has an upcoming show alongside Julie Smiley at the John Natsoulas Gallery in Davis open now through Oct. 26.

Abright explains that “Tremors and Tides” has many figurative elements, but mainly began with a simple question: “How can a place affect one’s work?”

While on the East Coast during his twenties, Abright’s paintings frequently removed the subject from a discernable environment. His figures were drawn in front of monochromatic backdrops and had a darker tone in color and emotion.

He was experimenting but also, “doing a lot of distortion and abstraction of the figure and kind of making these humanoid conglomerations that were artificially laid into interior spaces,” Abright confirms. “They didn’t really have any recognizable setting or intact main character.”

While working for a Brooklyn artist during this time, Abright was using collage work and acrylic paint frequently, spending hours pouring over photobooks of beautiful western landscapes. This caused moments of homesickness, but even more inspiration.

Abright craved to be back in the West inhibiting those landscapes for future work.

“When I moved back to the Bay Area,” Abright says, “I felt like I had a renewed interest in the natural environment, the built environment, the contrast between the two and how I was able to recognize that for the first time since returning to California.” 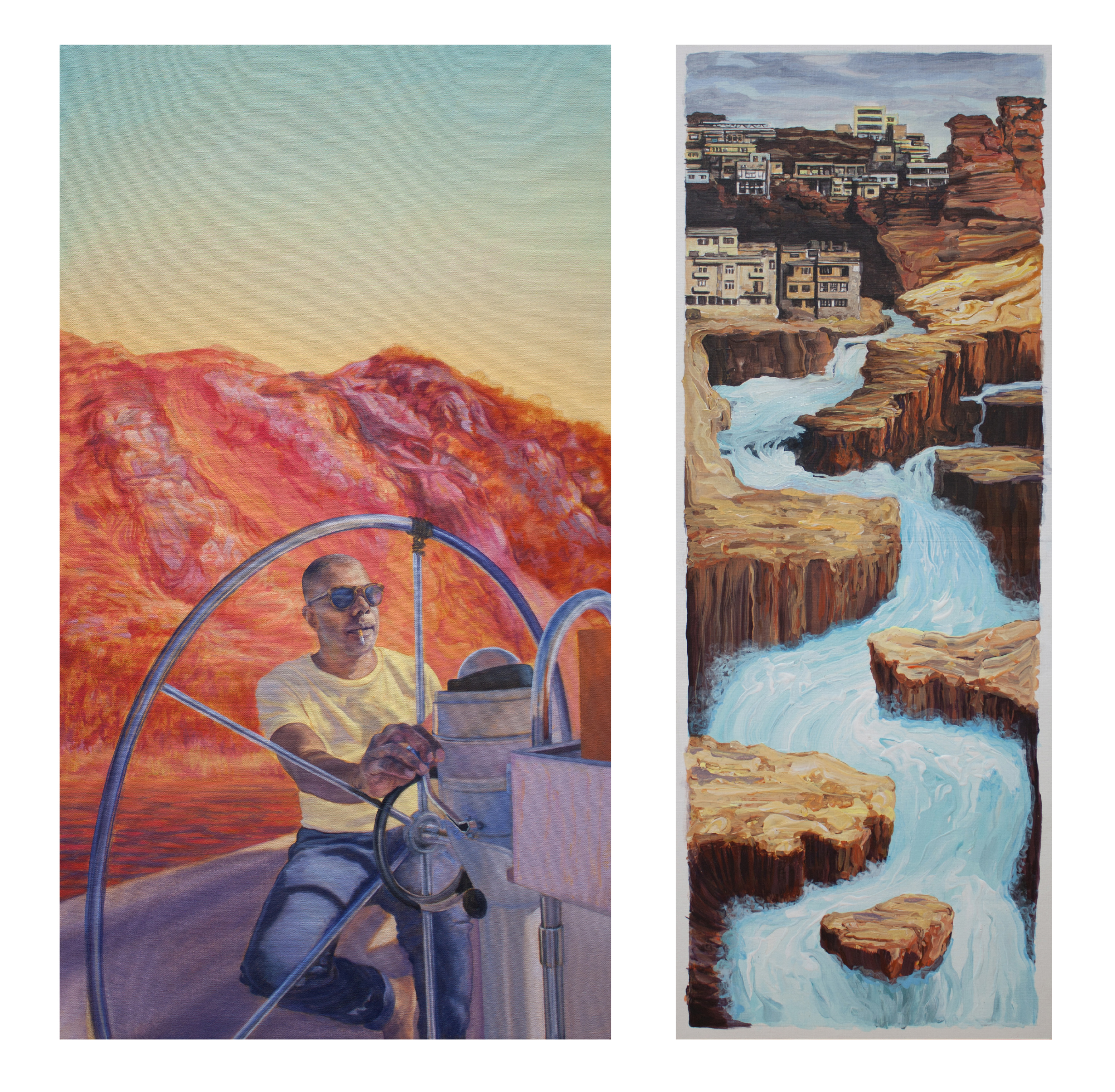 In his piece, “Redbank Corey,” the subject is a man named Corey Evans, a Texas native and buddy of Abright’s living the nautical life on a sailboat among a charming estuary. In this work, Evans is painted at the wheel of his vessel with a cigarette in mouth and a confident look north through tortoise-patterned sunglasses. Evan’s figure covers more than half of the frame.

“It’s interesting because this friend from Texas really introduced me to a new side of the Bay that has opened my eyes to other communities and other ways of living on and around the water that I find interesting and really attractive,” Abright says. “So he’s sort of in their as my guide, I guess as a person who shepherds me through the landscape.”

In Abright’s “Cut Crust,” water and architecture play significant roles. The audience may glimpse tones of tan being separated. Boxed-shaped homes within the painting are on high bluffs at a distance. However, what really attracts the attention is the impressive stream of water racing through the canyon of architecture. Here, the water is not what’s unnatural or peculiar about this painting; it’s the man-made structures that are disrupting the water’s natural path.

In response to whether the water and structures landscaped together are positive or negative, Abright answers, “I think it’s both, I mean we rely on water, and it’s so attractive to us aesthetically. Just in terms of survivability, we just want to be as close as possible to it … It shapes the landscape that we live in but it also kind of represents time and maybe a longer timeline than humans can really perceive or acknowledge. So I like that the water in these pieces is sort of always eating away at the landscape and inching closer and closer to the foundation that the human development has built upon. It’s a ticking clock before it does its thing to reshape the place.”

As for “East Bay Flumes,” we see a tall home border the edge of a racing river. The home is thin and resembles a face where the windows represent eyes and the garage door represents an opened mouth, with the driveway familiar to a human tongue.

Though most of “Tremors and Tides” is focused on Abright’s reflection of today’s infrastructure in the Bay Area, he explains that “East Bay Flumes” incorporates the past. He tells us that the setting is in the East Bay Hills, a place in the Bay Area region that was filled with old redwoods. As San Francisco was being built, people were able to see the redwoods from the San Francisco Bay. 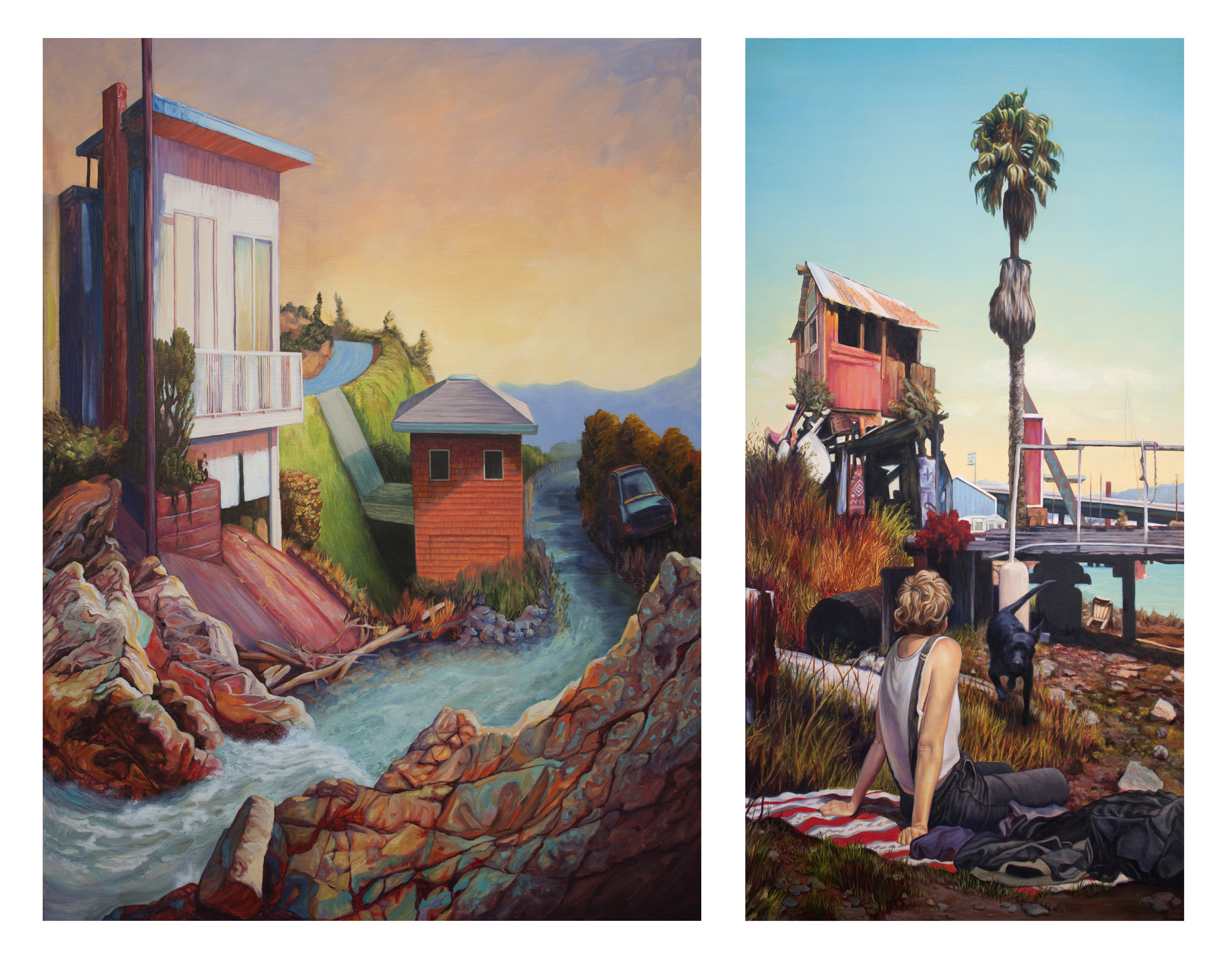 Because Abright uses the word “Flume” in the title, he is referring to the process of extracting trees from hills. With “East Bay Flumes,” the artist is exposing the viewer to a history of the development of the East Bay and its effect on the environment.

The connotation for these pieces really depends on the audience, but Abright has been able to take his thoughts and make viewers at least be aware of the ever-changing elements of where they live, especially if in the Bay Area.

“There is such a variety to the terrain here but it’s all so precarious,” he says. “It’s so precarious how people inhabit California, the West Coast, and the Bay in general. For me there is this sort of palpable feeling of impermanence in all of this. Now this extreme natural beauty is shaped by the same forces that make living here vulnerable for people. So all these things have a little bit of an element in the show. As I reflect on this and it becomes even more unaffordable to live here. That combined with a sort of inevitability of catastrophic natural disaster. It kind of fills me with this sense of foreboding and anxiety. So I’m trying to always take in the sublime beauty of the place and being reminded what I love about it. At the same time sort of waiting for this house of cards to fall. So those are some of the themes that have made their way into this work. And how I think about how place relates to the work that I’m doing at this moment.”

Make sure to check out the rest of Abright’s “Tremors and Tides” at his new exhibition alongside Julie Smiley at the John Natsoulas Gallery in Davis (521 First St.), now through Oct. 26, 2019. Opening reception is Saturday, Sept. 28 from 7–9 p.m. For more information visit Natsoulas.com.