In Defense of Digital

Justin Wood’s work shows the possibilities of the digital image 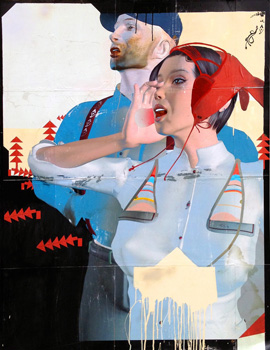 An olive-skinned woman with a smooth, red cap and jet black hair silently calls out into the distance; her piercing dark eyes are accented with the soft hint of blue balancing the crimson star shaped buttons of her button-up shirt. Just behind her, a man of medium build stands quietly in a comforting manner, a 5 o’clock shadow casting across his solemn face. Behind both these figures, red triangles bond together resembling pine trees and what starts as a lightly colored background of yellow sky blends into a darken abyss of black medium running off the end of the hanging canvas.

This piece of art titled The Vocal, along with dozens of others, is part of artist Justin Wood’s latest body of work, Family Affair, displayed throughout March at Midtown Village Café on 19th and I streets, Sacramento. And although The Vocal does contain some paint, this piece and all his work displayed was ultimately created on a computer at the hand of Wood, then printed and pasted to a canvas for all viewers. 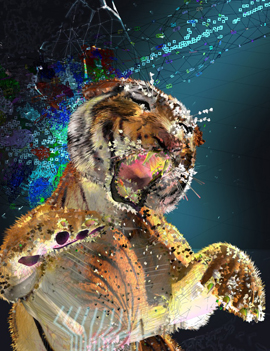 The University of Missouri’s Alumni Magazine, 2012

“What I’m really interested in is juxtaposition and mixing and smashing things together that don’t really work. The synergy between digital and analog is interesting,” describes Wood. “I was struck by the openness of [digital or mixed media] and that you could do so many different variations of everything you wanted to.”

The digitally crafted pieces that line the walls and hallway of the eclectic Midtown café log more than 10 years of Wood’s artistic career ranging from as far back as 2002, to a set of psychedelically colored women hanging toward the front of the business that he says were more recent. Wood credits his digitally contrived dexterity to his parents, his mom being an abstract painter, and his father, a computer software programmer.

“There’s this big mix between mom doing traditional painting and my dad hackin’ on the computer all the time,” explains Wood. “I think that’s kind of how my interests sort of came together or how the aesthetic came together in a way.” 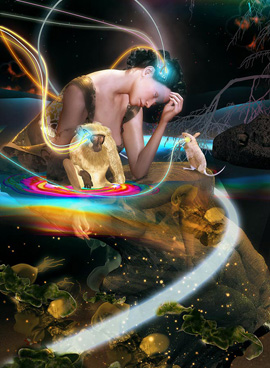 Wood’s father also had a heavy influence in the early development of MIDI music, a computer software capable of not only allowing musical instruments to communicate with each other, but giving one instrument the ability to control another or multiples. Just think, if a piano is programmed to play a G-note, then a trumpet, or clarinet or whatever other instrument available would also follow suit. Technology, people, it’s rad.

But, despite how sharp, intense or intriguing Wood’s images are, the measurement of effort when it comes to digitally crafted work within the art community and between art enthusiasts remains indifferent. On more than one occasion during art shows, Wood found himself facing loaded questions from viewers like, “Where’s the skill?” or “Where’s the craft?” It’s an attitude he’s grown all too familiar with since displaying his work in galleries in San Francisco, Los Angeles and even Germany.

“Just because you work on the computer, it’s not just pressing buttons. It’s not just saying, ‘Do this,’” says Wood of his creative process. “But, everyone couldn’t get over the fact that I was doing art digitally. So, I would try to sell my work in galleries and people would be like, ‘Oh, so you just press the art button?’” 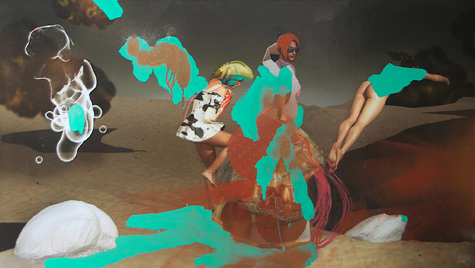 Wood compares this imaginary art button odium to photography, asking critics if a photographer is just a mere, talentless dreamer armed with a fancy mechanical device and a shutter-happy trigger finger?

“It’s a huge stigma because people don’t understand how you do it. You know it takes a hell of a lot of effort to make a good photograph,” says Wood. “You might get lucky once in a while, but you have to be a really good photographer with a great subject to make a really compelling photograph.” 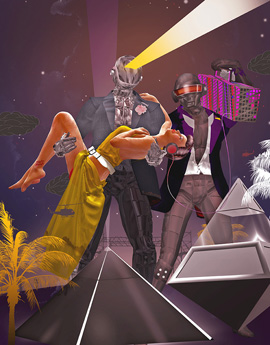 “I thought if I’m going to be an artist, I’ve got to be able to put bread on the table,” says Wood. “My mom was an artist and we were dirt poor. [She’s] always telling me how sorry she is about where we grew up. But it gives you experiences that you cannot get anywhere else and new ways to look at and appreciate things. It was important for me to be able to figure out how to at least make a little bit of money.”

His wife Laura is an architect who explores art freely in her spare time and coincidentally, has several pieces of her handcrafted art displayed at Midtown Village Café alongside her husband, and she also has an installation inside the California Museum on O Street standing over 10 feet tall. Inside the café, her oblong-shaped mobiles hang from the ceiling or are mounted against walls in various colors reflecting light and embracing the shadows their cardboard angles create. 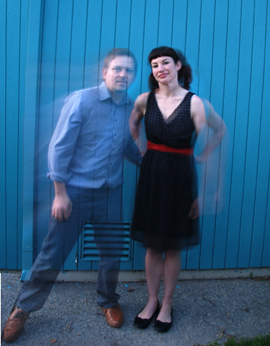 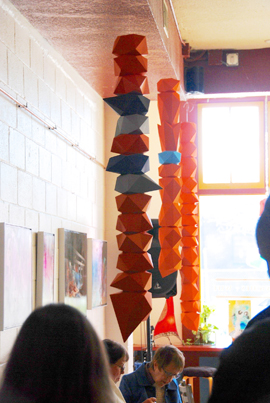 “We have a similar aesthetic, but it’s totally from different ends of the spectrum,” says Wood. “She’s not into pretty pictures…she’s into figuring out how these forms relate to space and how to manifest them in 3-D. It’s inspiring.”

Still, Wood’s affinity toward the digital realm versus the more analog will never stop him from defending his techniques because while he enjoys creating from a computer screen, he often finishes his work with paint. He explains this push and pull between mediums as a reoccurring conflict while creating art digitally, but often finds himself slightly returning to the physical when he finishes a piece with paint and physically displays it at a small café or gallery.

“I hope that there is this certain struggle that is illustrated in the work, which is where do we fit in this new, digital world,” asks Wood, who then poses these questions for critics of the digital and mixed media art process. 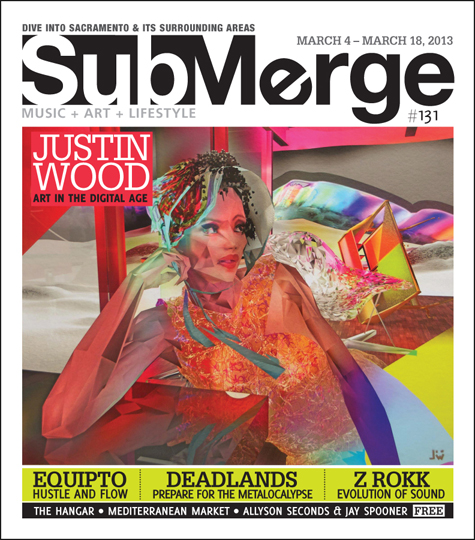