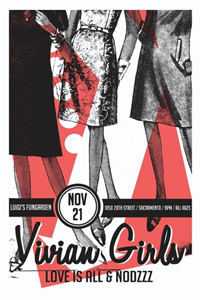 Five years and roughly 100 poster designs ago, Asbestos Press was a nameless curiosity sparked by the purchase of a screen-printing starter kit from an art store. But it only took Laura Edmisten five months of toying with the kit to toss the starter and turn her bedrooms and kitchens into workspaces–any place better than the deadly basement where it began.

Edmisten initially bought the speedball kit to screen print greeting cards, but when a musician friend inquired about a show flyer, she forgot about giving Hallmark competition. Her first poster was The Noise Geniuses. By her third poster she was hooked, trying out five colors on a poster, which takes a firsthand acquaintance with the process to truly understand the grueling nature of going beyond three colors.

“In my old apartment I’d do screen printing in the kitchen and my roommate would be in the living room watching TV,” Laura said. “I would put posters to dry all over the floor around him, leaving little paths for him to walk around. That’s how these things start: small, doing things for friends and it just grew.”

Her first workspace was supposed to be the basement in a friend’s house. But the house was 100 years old and even after a proper cleaning, she still would have to deal with the asbestos issue. The operation moved to her kitchen, but growth combined with a cooking space that looked like Jackson Pollock’s workshop forced Laura to move the operation once more. She now lives in Oak Park with an upstairs office all to herself. No matter where she moved, though, that first workspace stuck with her. “So I was trying to think of a name for all this,” she said. “As a joke someone threw out Asbestos Press. We all laughed and it stuck. There was a running joke that I mixed asbestos in the ink, like how Kiss put their blood in the ink.” 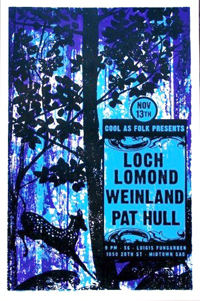 Despite limited-run posters being labor intensive, Edmisten appreciated the hands-on craft that produced a unique poster with each swash of paint pressed into the paper. I visited her at home to see the process first hand, which was the day before her big move into a space at Tangent Gallery at 2900 Franklin Boulevard. As she put on her trusty yellow apron, speckled in every possible color of paint conceived, Laura noticed me take an uneasy step back from her work board. “I’ve had this for five years,” she said looking down at the messy apron. “Every poster is on here–which is weird to think about.”

Laura spoke of her poster hobby turned side business as a saving grace to an otherwise creatively unfulfilled life. Around the time she bought the kit, she was a struggling graphic design student at Sacramento State. Screen printing was her shot in the arm, although it still didn’t guide her through a degree. “I wanted to start doing my school projects screen printed and my professors wouldn’t let me,” she said. “They were like no you have to abide by this rule, otherwise you can’t do proofs. But, I was like no I want this typography, with this distress on it. They’d be, like, no. It just made me want to do it more.” 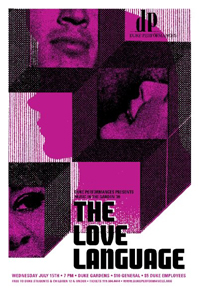 he spends her weekdays keeping the bills paid as a graphic design artist, but once she’s home, a homemade office awaits. She and her uncle built her current setup by nailing plywood to a couple of wooden horses. They built an exposure light box made from a sink cabinet and Home Depot supplies. Surrounding her tools is a seemingly endless supply of source inspiration she acquired from scrounging through garage sales, estate sales and secondhand shops.

She dug around a display of items, picking up a striped battery from the ‘50s because she admired the typography, an old inkbottle from the ‘40s with a pirate ship, vintage boxes for vacuum tubes and flash bulbs. Junk records and even discarded records from the Davis library, for which she has a project in mind; she picked through a box of old cards and admired the bird images. “I love old stuff,” she said. “I collect vintage packaging and old magazines. Things just have a way of coming to me. Before I designed posters, I’d just collect this stuff.” 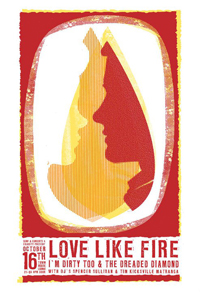 Her garage was no different. Her pack-rat tendencies were hidden out there with a collection of old bikes and her roommate’s Burning Man rickshaw. She owns a press for fabric, because she is trying to learn how to do T-shirts and tote bags, but for now it’s buried in the garage. “I really do like paper. Fabric is totally different. It moves and it’s flexible. I tried a couple things but it hasn’t panned out like I thought it would.”

Back in the office we moved to a stack of posters that included a Doom Bird release show, John Vanderslice show at The Townhouse, a Japandroids show at the Blue Lamp and a recent Jandek show sponsored by KDVS. She pointed to the Doom Bird poster: “This tree came out of a magazine of the ‘70s,” then the Japandroids poster: “This was an air conditioner unit illustration from the 70s.” She held up the Jandek poster. “The hand came out of a magazine from 1932, which was my grandmother’s, it’s an Art Deco hand. The eye came off of an album from the ‘50s, this head image came off a health book from the ‘30s and the chair and the window came off a ‘40s home improvement magazine. All of these have a different story.”

Among the scattered creations, her workspace walls were lined with framed show posters that she didn’t create, but came from shows she attended. We shared a brief commonality when we discovered we were at the same Les Savy Fav show in San Francisco, from which she had a poster. “I listen to the music,” she said regarding her creative process. “I try to see what their style is, what kind of mood that evokes in me and how I can translate that into a design that will get people to the show.” 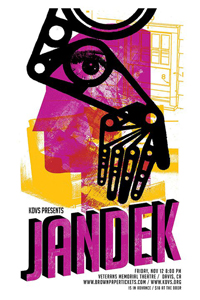 Laura creates by one simple rule: “If you take it, you have to make it your own.” She didn’t hesitate to admit to novice drawing skills. She relies on bits and pieces of things, collected and perused until she feels inspired; an acquired knowledge of the best paper stock, what color inks work and what don’t, what you can get away with. She even keeps mess-ups and test prints; everything is recycled. “It’s funny because I can track my style,” she said. “I’ve made some clunkers. It happens. It took me a long time to get to this point.”

Without a happenstance request, Laura may have never found her artistic calling, but since discovering it her perspective is forever altered. “I had no knowledge of any of this, of poster, of the community, none of it,” she said. “I knew Frank Kozik, but that was about it.” Edmisten is displayed in the Rock and Radio Museum and predominately at Luigi’s Slice in Midtown, in addition to an upcoming display at Phono Select in December [2010]. 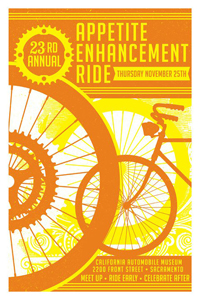 Her biggest run was 200 posters for a Love Language show at Duke University. She did the cover art for an issue of Tape-Op and contributed a piece to the Of Great and Mortal Men: 43 Songs For 43 U.S. Presidents compilation. She’s part of a community, working on shows with Concert 4 Charity at the Townhouse, with bands and with other poster artists on the scene. “I’m friends with everybody and it’s kind of a little scene,” she said. “We’re all supportive of each other.”

She’s filled requests to make wedding invitations, design album art and toyed with making tote bags. The “About” section of her website boldly states she strictly prints her designs and is not a commercial print shop. “I get weird requests online. Like, ‘Can you make a fake band poster for my boyfriend’s birthday?’” she said. “‘I only want one and I live in Canada.’ I’m really not interested in that stuff.”

I asked if she denied the request because the person was Canadian. 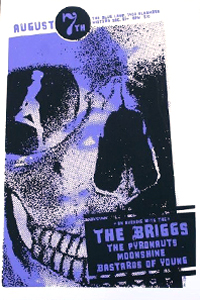 “People think I have a workshop with machines,” Laura said. “I’ve had people want to be my intern. It’s funny because a lot of people don’t realize this is a small operation. It’s growing, but I’m kind of quiet about it. I do art shows. I sell posters online, but I’m a pretty unassuming person.”

Asbestos Press’ poster show is on Second Saturday in December (2010) at Phono Select records on K Street, Sacramento. There will be posters, DJs and possibly live music.