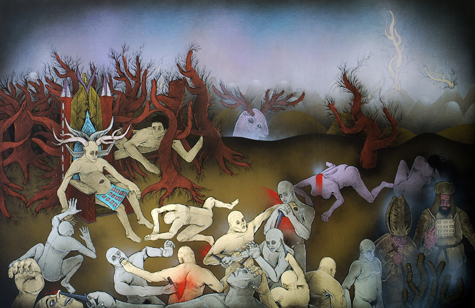 “People generally are unaware of their environment or how their everyday decisions might be affecting somebody thousands of miles away,” says Sacramento painter Justin Lovato, 23, whose latest series, Infinite Bewilderment, predominantly features images of jesters pulled from tarot cards, influential hands that tug at his characters like ventriloquists and symbols borrowed from the Freemason and Illuminati cults.

The series, opening Aug. 8 at Upper Playground on J Street, is challenging the notion that depictions of feudalist peasants might seem dated or have little relevance to modern life. “I like to use a lot of old symbolism in my art,” he says. “I am fascinated with religious-based art. Medieval art is a big influence on me. The whole idea of people in feudalism at that time, I think we live in a neo-feudalist society right now. Everyone is in a constant state of confusion.”

Lovato admits his art can be somewhat blatant, but he would rather the message be obvious than lost. “I think people are psychologically damaged due to a lack of good information and a lack of speculation about why we’re here and what they should be focusing on. I think if people lived moment to moment and redefined ‘need’ they might be more content, focusing positive energy elsewhere.” 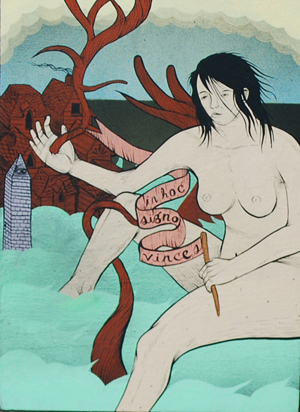 His work borrows medieval art techniques, all the way down to a disregard (although at the time it was lack of understanding) for perspective and dimension. “I like that it’s not very advanced,” he said. “It’s really flat looking, but the point is the imagery is blatant, which I am definitely guilty of. It’s aesthetically pleasing to me.” He also is enamored with the prerequisite of including religious themes. “The idea that you could be chastised for making art that didn’t revere God is intriguing to me,” he said.

Lovato appreciates the plight of the juggler, who is relegated to “grab ahold of everything all the time.” “It represents the things that are deified to grab hold of people’s energies,” he said.

As for the archetypes of secret societies, Lovato swears he is not a conspiracy junkie. “I use that stuff because it makes for a good metaphor,” he said. “I don’t believe there’s an Illuminati. I think more out in the open there’s a subsection of rich industrialists that make the large decisions that affect the bottom tier, but I don’t believe in a mystical force.”

For Lovato, the unseen hand of influence is more visible than we are often willing to admit. He has a series of paintings in which a ubiquitous hand guides fountain streams of pills to lethargic characters, filling up their stomachs, heads and backs. “It’s a funny take on where we obtain our ideals,” he said.

“Whether it’s from other people pushing you along, or respecting someone else’s opinion who happens to have a print magazine or be on TV. It’s about the general influences that guide our ideals.”

The most controversial of his techniques could be his stripped depictions of the female form. In several of Lovato’s portraits the women are chopped down to the sexual torso. But is Lovato a mysogynist? “I want people to be confused at the image,” he said. “I am portraying the disgusting, abusive, offensive way that we view woman in our society by displaying it in a way that might make a woman feel offended by looking at it.”

Many of Lovato’s characters seem to be obese figures with pattern baldness, lumbering in a glum haze. But he resists a notion that it’s his view of typical Americans. “I don’t think people seem unhappy,” he says. “I enjoy people and talking to people I meet no matter who they are or what they might think or buy into.” He is aware that while he has his convictions, he is not a man with all the answers. “I am [trying to be] more suspicious of my everyday surroundings, and archetypes, and people’s expectations of me as a member of this hive.” 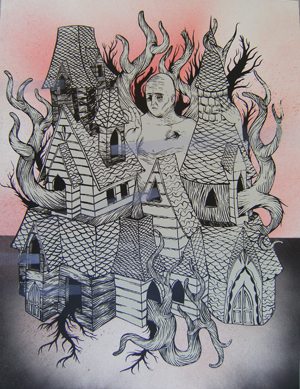 Lovato, who admits to listening to everything from ’60s and ’70s jazz and old punk rock to hip-hop and even lectures (“It keeps your mind occupied, while you’re meditating over a painting,” he explains), got his first show three years ago at The Toy Room from owners John Soldano and Craig Maclaine. Lovato recalls being 16, making trips to the alleyway gallery and gaining a fascination with the lowbrow art featured there. “I started hanging out there when I was a kid,” he said. “I got my first show when I was 20. I actually sold a few pieces, which was encouraging. I started doing it consistently ever since.”

“Consistently” rounds out to six shows a year. Most recently his work traveled to the Washington D.C. area after selling three pieces from a Toy Room show to a gallery called Art Whino. “Craig and John were a huge help in first getting my shit out there,” he said. “That’s the good thing about showing at gallery spots, there’s usually someone there who wants to help you get your name out there.”

When Lovato unveils his pieces Aug. 8, expect a remodeling of the Upper Playground boutique. Lovato plans to repaint the space and include interactive art. “I’ve been fucking around with animation,” he said. “I started looking at old toys from the 1800s. I’ve made these flipbook machines for people to play with.” 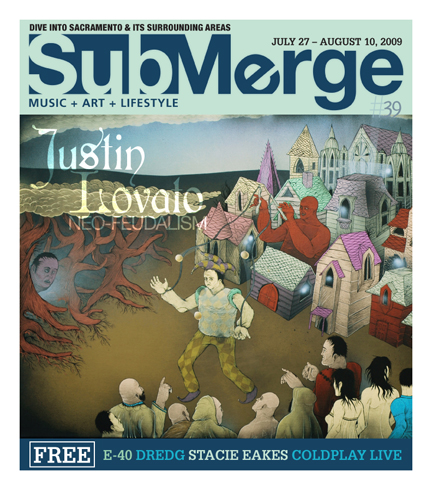