Society through the Eyes of Jacqueline Gallagher

Jacqueline Gallagher wants to be taken seriously as an artist—just don’t take her art too seriously.

Gallagher sees the gorgeous and the grotesque in humanity, finds the comic relief and intricately recreates it in her oil paintings and drawings.

The centerpiece for her upcoming Sacramento solo show, Satirical Saturation, is a Fiji “Octomaid”—half a woman stitched to half a floppy, twisting tentacled creature. 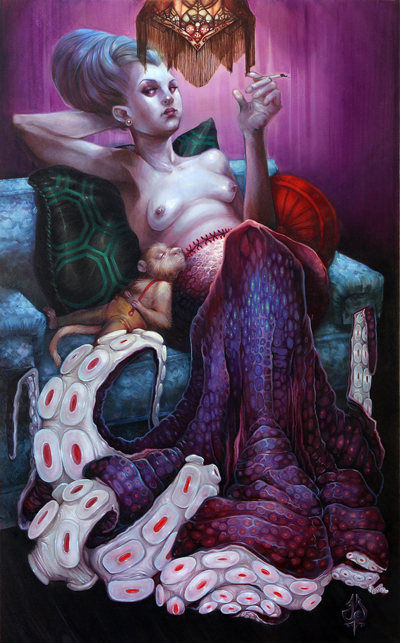 The segments’ details—human and octopus—sag and ooze realistically in purple and fleshy pink and a sleepy monkey completes the image.

“There’s a sexual element to it, too, that brings up the idea of fetishism and objectivity,” Gallagher says. “I post my work on various forums online for critique, and my favorite comment so far was on this piece. It was, ‘Pretty cool, I wish she was hotter but whatever.’”

“The way I see it, people really haven’t changed much,” she says. “We’re still just as vain, overindulgent, self-interested, and decadent, and these characters, with their protruding horns and snakes, represent those very human traits.”

The show works off some of her previous paintings and exhibits, which have included candy-colored mermaids smoking with monkeys and deathly women covered in bugs but growing unicorn horns.

Earlier influences spring from her childhood in Hawaii, where Gallagher still resides. The islands still have a place in her work, which often portrays oceanic or jungle creatures. Or her house cats. What tourists might consider inspiration, however, Gallagher considered somewhat of a chokehold. 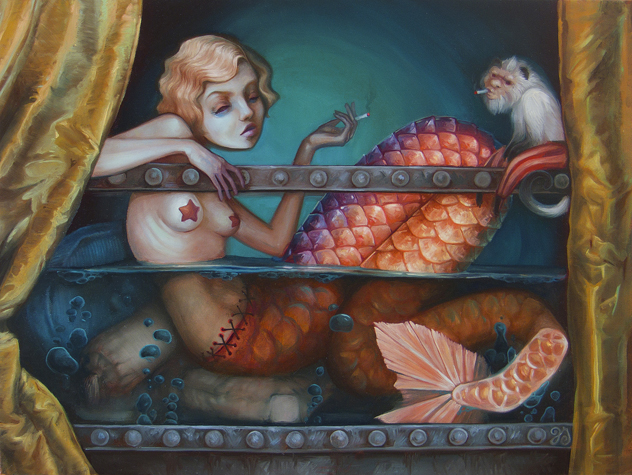 “When I first started painting, everything was very Hawaii-oriented—ocean landscapes and flowers and all that and that’s what I started out painting because that’s all I saw,” Gallagher says. “In college, I started looking at work from out of the islands and got more inspired. I don’t know, it was actually kind of limiting growing up in Hawaii.”

Gallagher also worked in the commercial art business, and the kinds of customers she encountered sometimes ended up as inspiration for the flawed human condition represented in her work.

Japanese art, cartoons and anime also influenced her style as a kid, leading her to experiment exaggeration with bright colors and shapes.

“What’s funny is I try to make the paintings a little dark, since I’m really interested in opposition and mixing something really pretty with something really grotesque and slimy, but sometimes people don’t always get the humor,” Gallagher says. “I’ve seen some horror art and this is not even close.”

It’s been five years since Gallagher launched a website and started touring nationally with her work, exhibiting in San Francisco, Sacramento and Brooklyn galleries specializing in pop culture, macabre and surrealism.

Over that time period, the 30-year-old has gained a strong fan base, which she credits to social media and Creep Machine Magazine, an online publication currently being reworked.

“I talked to this guy online, Joshua G., from Creep Machine, and he was really encouraging and he had me participate in a San Francisco show and got my website started too,” she says. “He just looked for art online and found me. That helped me jump off and get me on your coast there. It’s all social media that’s made it possible, really.”

Joshua had been scouring sites likes Deviantart.com when he stumbled upon Gallagher’s work and wanted to share and provide an interview for Creep Machine.

“The first painting I saw of Jackie’s was A Well Trimmed Bush,” he says, referencing a painting of a smoking woman in a lace dress with ghostly eyes and an equally ghostly-eyed cat.

“I loved the classic feel the painting had, the pose, and the attention to detail as seen in the drapery, lace, and skin tones,” Joshua says. “It’s a beautiful painting, but there is also a vibe of creepiness to it that draws you in, makes you want to see what else this artist has created.”

The web designer/art supporter says artists face economic challenges today that have made it harder to live off their work, and he feels it’s partly because the public consumes art differently. 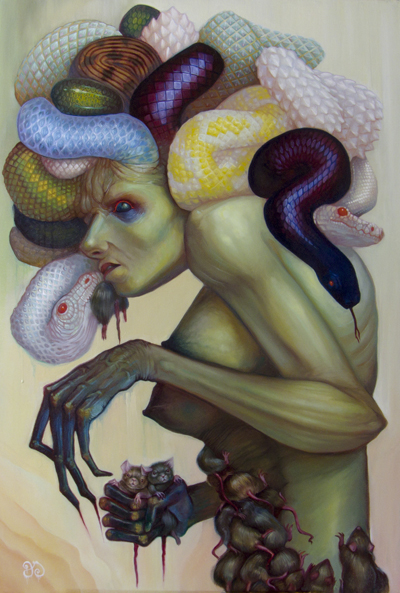 “So much art is consumed digitally now, and I think people need to remember that most of the time the work of art they are looking at, and sharing on social media, exists and might even be for sale,” he says. “Owning art is seen as a luxury to many people, but it is possible and can nurture and support the artists when people do buy the work. With that said, I think that darker forms of art are gaining in popularity. There are of course darker works that tend to be too much for people to buy and hang in their houses, but Jackie has done a great job of creating ‘dark’ works of art, that are also enticing.”

Joshua notes artists like Caravaggio and Francisco Goya (with his Disasters of War series), as well as Black Paintings from the 1800s as great examples of classical “dark art.” He says today’s movement takes more of a nod from pop culture trends.

“When you really dig deep you see that there is some amazing and beautiful works of art that are not created simply for the sake of being dark/shocking, but are telling stories, commenting on social and cultural issues, and in many ways helping the artists that create the imagery to deal with what they see around them,” he says.

Gallagher has successfully used social media and her website as storefronts for her artistic commentary, and currently lives off of her creations.

“It’s a really good time to be an artist right now because of social media,” she says. “It’s a good way for them to show off their work and a platform to meet other artists. It was good timing in my life, I guess.”

Gallagher says she doesn’t have much planned yet after her June 14, 2014, opening at Dragatomi in Sacramento.

She has started experimenting with other media and tools as well, and Oahu residents can often get lucky with a one-of-a-kind print at a monthly flea market the artist frequents with smaller, quickly created pieces. For the last few, she’s done everything from Wes Anderson characters to hot dog and hamburger monsters.

“I’ve been using watercolor and gouache a lot more lately and I’ve been kind of doing more graphic images with black ink and splashes of drippy color, so it’s less form and three-dimensionality,” she says.

She’d like to experiment with sculpture but continue to paint for a living.

“I like just having these solo shows sporadically but what I’d like to do is more nice quality prints and limited editions, so I’m trying to work on that.” 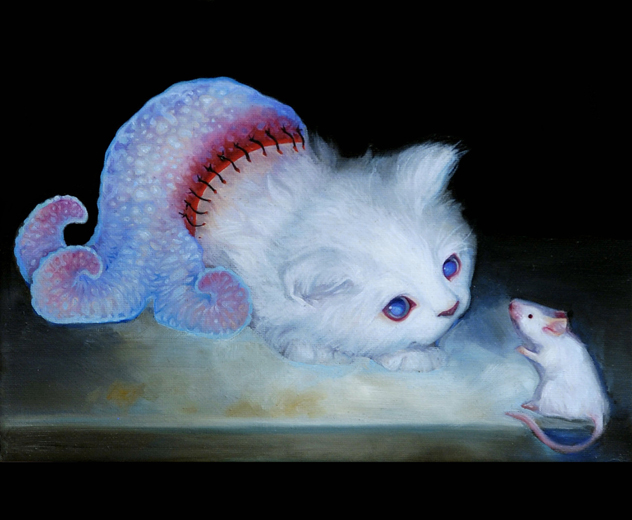 Add Jacqueline Gallagher on Instagram, @Jackiepaintdead, to see her works in progress, her fun flea market prints and her cute kitties. Or, catch her starting June 14 through July 5, 2014 at Dragatomi, 2317 J Street, Sacramento.