If you are looking for art that is pretty, don’t expect it from James Mullen. This artist is not out to make art for beauty’s sake.

What is more important to him is to turn heads, in the same fashion that heads turn when people hear the sound of a car wreck, whether they want to see the carnage or not.

If he has caused the observer to ask questions like, “What was he thinking?” or, “What the heck was he up to here?” then consider the piece a success.

“To have a piece that is a bit dark and disturbing is to be that car wreck,” the Sacramento native says. “I’m not looking to hold up an object for admiration; rather, I’m looking to grab someone’s attention, grab them by the lapels and prevent them from looking away, almost to rivet them in place.”

It is appropriate that he should mention rivets, considering his upcoming exhibition, Jagged Edges, at Bows and Arrows, a collection of three-dimensional nail fetish pieces that incorporate wood, nails and doll parts. This body of work, inspired by Congolese nail fetish pieces displayed in the de Young museum in San Francisco, will hopefully make people’s hair stand up, Mullen says, as it is one of his “darker” collections.

A personal favorite is Nail Fetish #8, which is almost Christmas tree-like in a grotesque way. The flayed skin of a doll is wrapped around a triangular piece of wood, a thick spiral of nails curling around it. A telephone rests on the doll’s arm, and in its opposite hand it holds a compass. The piece is whimsical and heavily influenced by Dadaism, Mullen says.

“I find it very powerful and a little disturbing, perhaps, which is what I’m going for,” he adds.

To be clear, Mullen is an abstract assemblage artist. His artistic process is very organic, he explains, in the sense that the objects he starts with will dictate his final product. He may grab one piece from the rafters in his studio, and the rest of the work comes together around it. 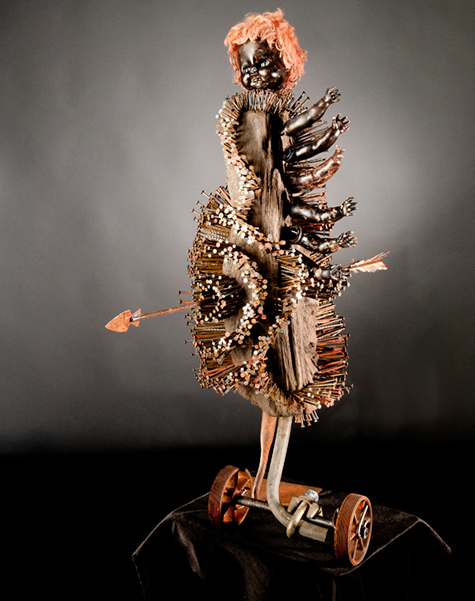 “I don’t know where [the piece] is going or where it’s going to end up, but I just start,” he says. “Starting [gets] the creative juices flowing, and the ideas start moving through my head, and the piece will grow from whatever object just comes to hand.”

As far as what comes to hand, it is an eclectic mix of items that form Mullen’s artistic palette. In this way he is also a collector of odd and interesting things. Animal skulls, for instance, pieces of wood, a rusted bike frame or a horse’s jaw are considered treasures. A goat skull he found on the side of the road was integrated into one of his nail fetish pieces. Often these are objects he finds on the Walker River alongside U.S. Route 395 near his home in Grass Valley, or on bike rides, at garage sales or junk stores. 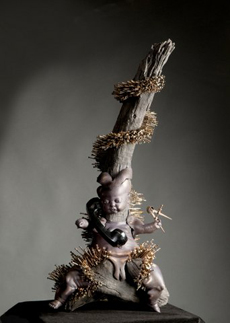 Unable to see Mullen’s studio with the naked eye, Submerge asked Mullen to describe his studio in Grass Valley. He did; he also sent pictures of it.

Work surfaces and shelves disappear beneath seas of hand tools, saws, canisters, tubs and boxes. Odds and ends are piled high, while a web of doll heads, cables, tubing and a picture frame hang from the ceiling. This is where he has spent 20 to 30 hours per week creating his nail fetish pieces. From this clutter emerges Mullen’s works of art.

Each work comes together using epoxy, nails, rivets, screws, wire and pressure. The natural tarnishes of the pieces he uses are integral to the characteristic of his work, he explains. In order to preserve the rust and grit of his assemblages, he chooses not to weld, though he knows the skill. 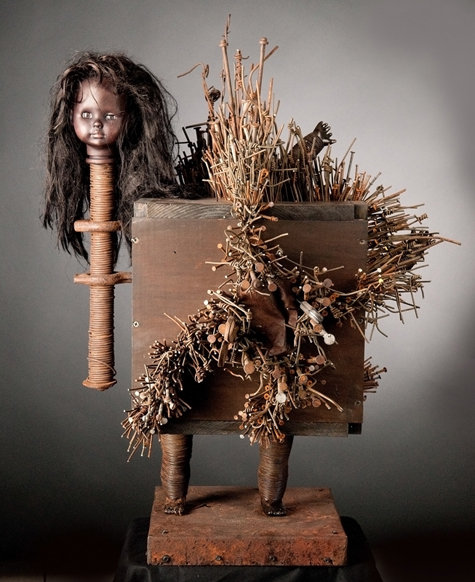 “I really enjoy the patina of age that items show during a lifetime of wear and weathering and what have you, so I don’t weld,” he says. “I do wear out a lot of drills.”

Assemblage was not always Mullen’s forte. Once upon a time, he worked with clay. In fact he has worked with it on and off for 40 years, since he first began sculpting in high school.

Like a writer becomes afflicted with writer’s block, or an artist walks away from a painting, he too experienced a dry moment sometime in 2007, when he no longer wanted to work with clay. He stopped midway through a sculpture, and for four months did nothing more with it or any other clay works. 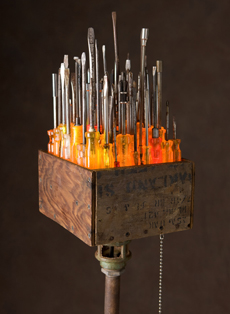 Still, he knew he wanted to create art. So, while standing in his backyard, his eyes fell upon piles of rusty fencing, wood and sheet metal, and he decided that these pieces would become his new media. He has been an assemblage artist ever since.

Whoever takes a Mullen piece home has little control over how to display it, because Mullen already has that taken care of. Often he intentionally builds a base into his pieces so he has leverage over the angle it is seen, whether they are built onto pedestals or elevated with wooden chair or table legs. This creates a towering effect.

“Once you make a piece and send it off into the world, you don’t have control anymore on how it’s going to be treated…what people are going to think of it. It’s all out of your hands,” he explains. “But by building the entire piece and including the base, I at least have some influence over the perspective of which it’s viewed.”

Practicality doesn’t always come into play in his pieces, however. As he is largely influenced by the Dada school of thought, his pieces are meant to be illogical and nonsensical.

“I don’t overintellectualize art. I try not to dissect it,” he says. 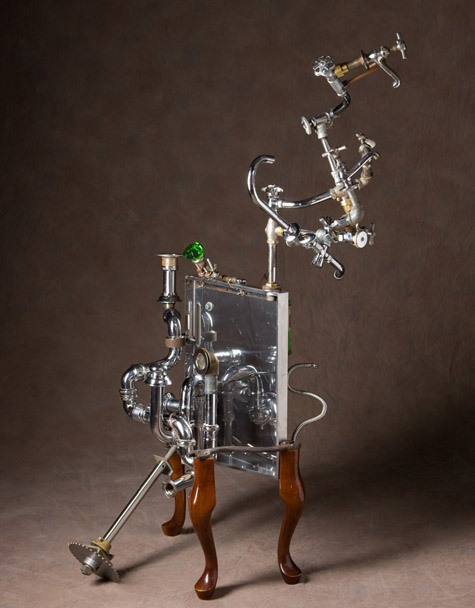 Take one of his older pieces, Plumber’s Daughter, for instance. Plumbing pieces, a section of a steel grill, a doorknob and a lard bucket are arranged vertically atop cherry wooden table legs. There is no rhyme or reason to the bathtub-like creature, except that it was dedicated to Mullen’s wife, who is, in fact, a plumber’s daughter.

While it is a head turner, there is little other meaning behind it. In the same vein as Rube Goldberg, these are little steps to absolutely nothing, he says.

Bows and Arrows will host an opening reception for Jagged Edges on Friday, June 1, 2012 from 6—9 p.m. Find out more at http://bowscollective.com/. You can delve deeper into the mind and art of James Mullen at his website, http://jamesmullenartist.info/.