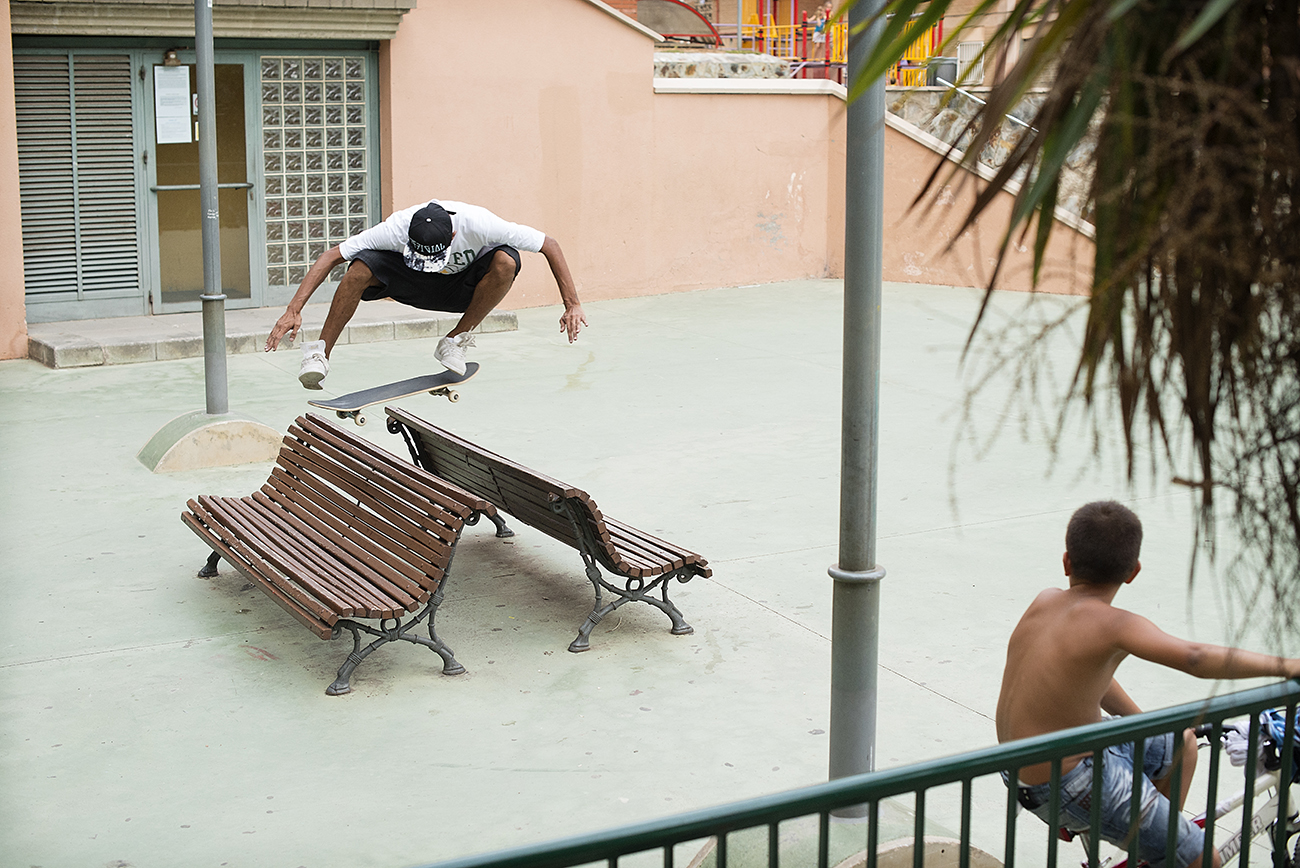 I started hearing about Jeff Landi a decade or so ago, and it was always in the context of how surprising it was that someone so kind and humble was also so technically gifted.

I don’t need to tell you that there are scores of hateful photographers who sneer pretentiously from behind their expensive Canons. Landi’s photos are special because he’s different. While his work is technically impeccable, what stands out is the outright humanity of his photos. Browsing his work can be an emotional experience wrought with tenderness, pain, surprise, glee, dignity and, well, lots and lots of skateboarding.

Perhaps most surprisingly is how he manages to conjure such emotion in what can sometimes be a really dry genre. Even his photos without human subjects seem to exude a playfulness and compassion that are more than the sum of the objects depicted. His food photos, for example, are vibrant to the point of suggesting motion, and his action shots, while unquestionably portraying motion, evoke a kind of calm that lends itself to the compassion that seems to be the hallmark of his work. To meet the guy, it’s not a surprise. He’s just as full of energy as he is of kindness. Landi is a busy guy between traveling for work, being a dad, shooting personal and corporate photography and now with an upcoming show at Beatnik Studios. With all he has going on, I caught up with him at, of all places, a Sacramento Kings game at the Golden 1 Center to chat about it all.

Landi was able to juggle our interview and the game flawlessly, knowing player names, calling out the big plays and adding context for his unsavvy guest, which in hindsight is probably something photographers get really good at; balancing the action in front of them with the reason they’re there in the first place. We sat down, grabbed a coffee (we’re both dads out on a weeknight after all) and talked about his work over some Red Vines. 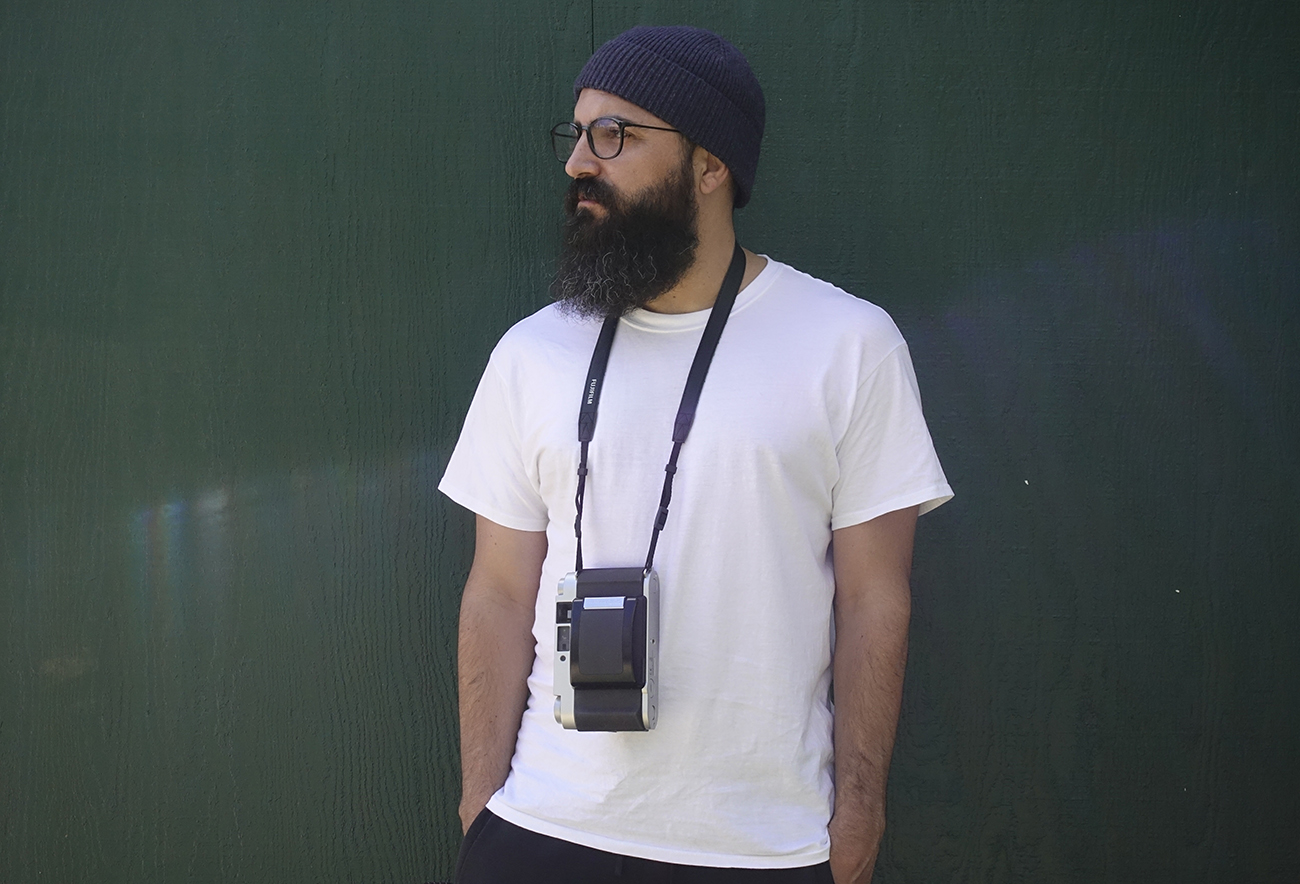 How’d you get started?
I think I was always sort of generally interested in photography and videography, but as kids we grew up skateboarding, and from 12 on, we always had video cameras, filming each other. I think as an extension of that, I started taking photos. As I got older, it started to interest me as a career. Initially I took a photo class at Sac State and I fucking hated it! I’m like, “There’s no way I could do this. I’m not interested and I don’t have an eye for it.” Maybe six months later, I had moved to San Francisco and thought I’d give it another crack. So I took a black and white class with an instructor at City College, and she had been working in New York as a printer for some well-known, older street photographers, and she just shared so much inspiring imagery with us—all of this old classic street photography and just brought actual prints and books of other artists, and that got me excited about photography again. I didn’t know what I wanted to do with it, and my photos were awful, but she inspired me. I also had a really good friend in that class who went on to do a lot with photography and video stuff, and we also had another friend who was just there using the dark room all the time, so we had a little crew and I had this teacher, and I wasn’t shooting any skateboarding at that point.

Really, so it was separate for you? You were skateboarding still, I assume?
Absolutely. I was goofing off and randomly taking a picture here and there, but I wasn’t proactively shooting anything. Actually, in that class I did one skateboarding photo and the teacher loved it. She said, “You found what you should be doing” … I looked [at it] recently and it’s not really a very good photo. It has meaning for me, but aesthetically, not so much. 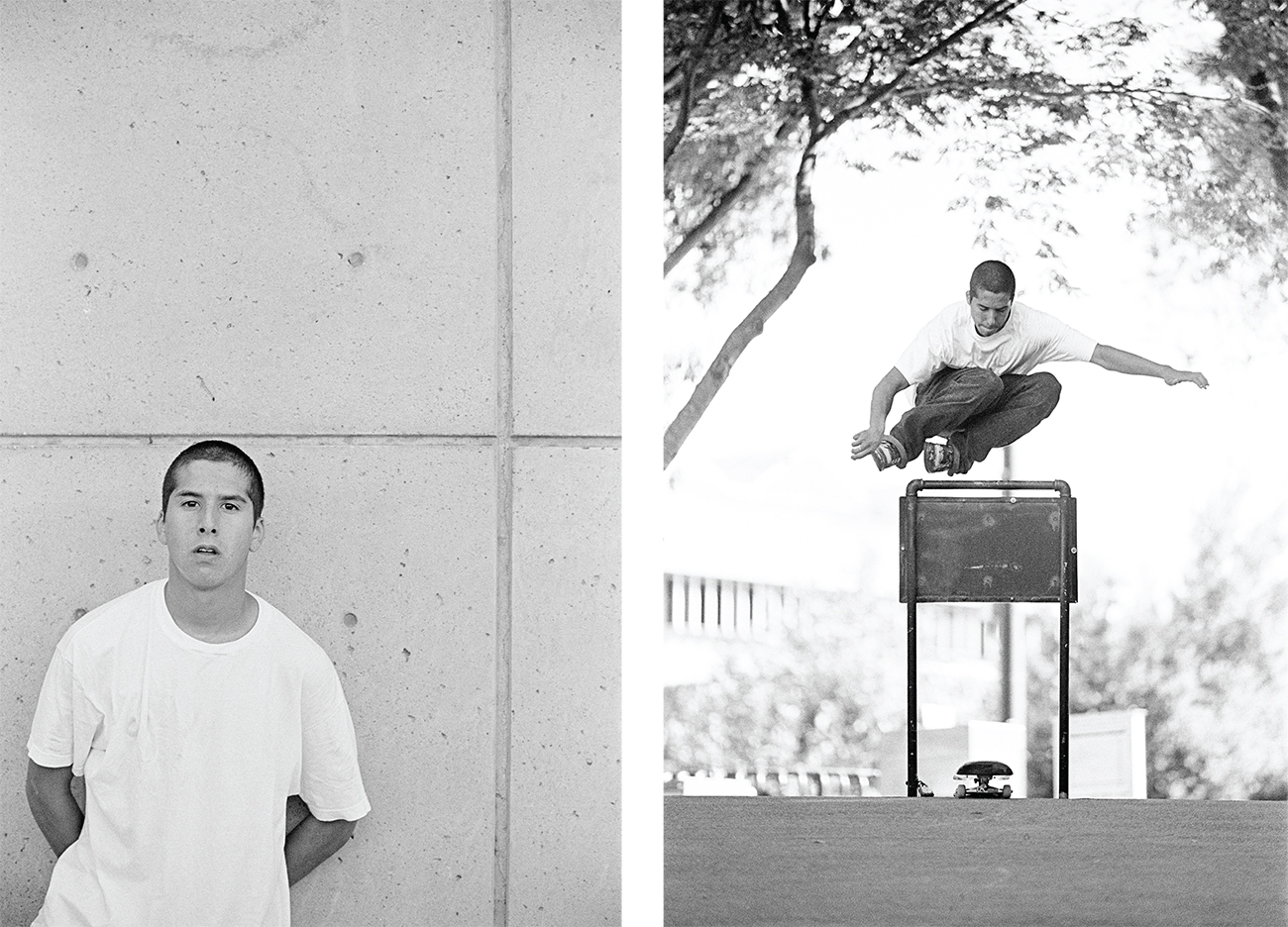 What led you to doing it professionally?
From that class, I started shooting a lot of skateboarding, and got a gig. I started shooting photos for Heckler, if you remember them. Those guys were a huge influence. We all grew up skateboarding and I was just peripherally good, but I knew the Heckler dudes and hung out with some of their photographers. So I had a little experience with them and they hooked me up with film and they had a darkroom and ran my photos—graciously, I might add. Somewhere in there, my friend was working for another skateboarding company called Slap, which is a sister publication of Thrasher. I was fostering that relationship, and then went to San Francisco State and kept exploring photography, and I was already on my track photo-wise, but long story short, my last semester there, they gave me a project on Slap, just photographing for an article about Sacramento skateboarding, and it just took off from there. I graduated and got a retainer gig from them.

Let’s talk about the subject matter. I noticed that even what you call your “skateboard photos” don’t seem to be of tricks as much as they’re highlighting a bigger story. I’m thinking of the photo on your site of a guy doing a kickflip under a bridge with a scooter in the foreground.
Yeah, I just shot that. That’s only a few months old.

There’s another with a group of kids pushing their friends on a skateboard. It’s interesting to me, because those aren’t classic skateboarding photos. They’re humanity photos with skateboards in them.
Yeah, I have a couple things going on. I’m really attracted to action photos. It doesn’t really matter what sport it is, I love action photos. I also really love photography that involves people and tells a story. I try to have more depth to my images. 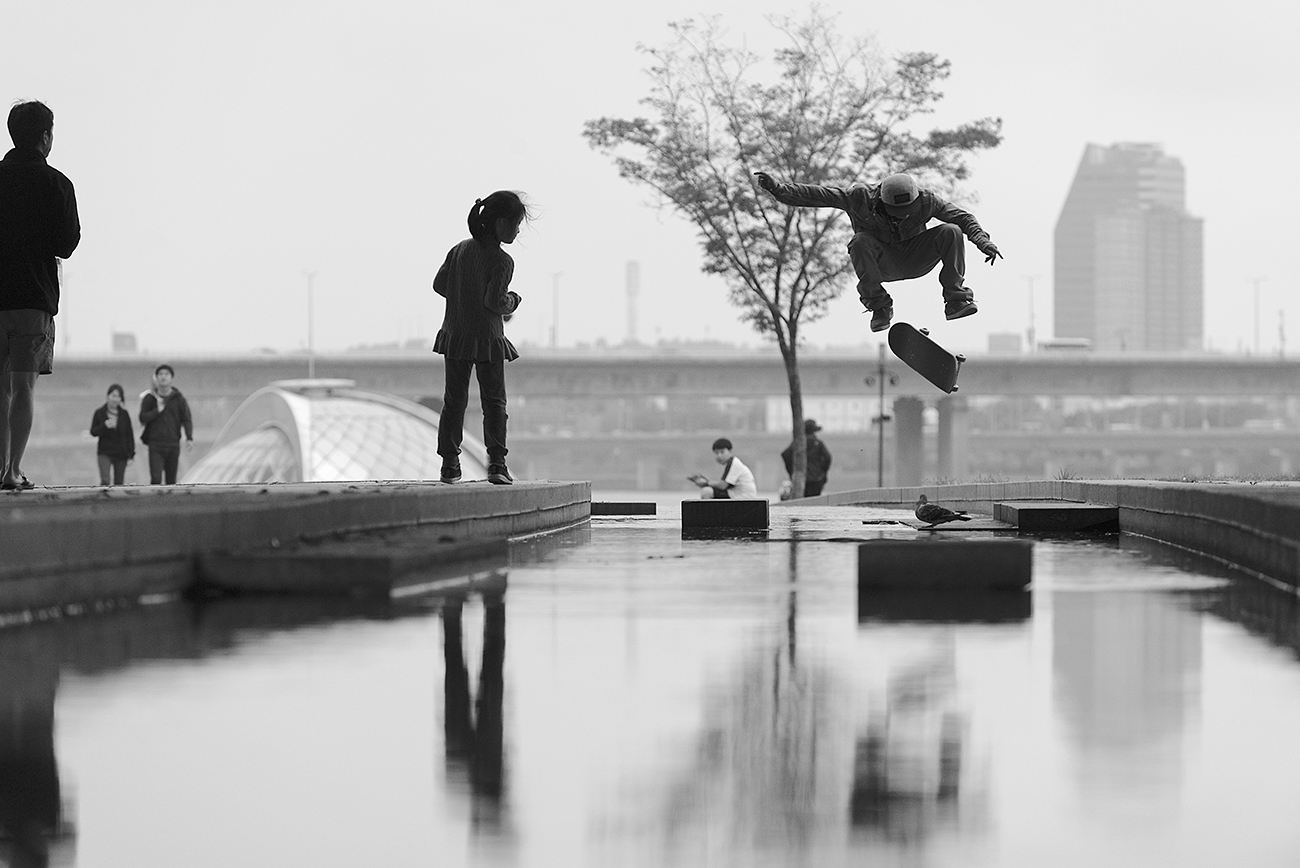 It shows.
Well it’s hard. I mean, you write, so you know. Sometimes the work is just the work, but sometimes you get happy accidents. I love happy accidents. For example, my favorite photo these days is this black-and-white photo of this guy skateboarding and he’s going over water and there’s a little pigeon in the foreground. I wasn’t going to take that photo and my friend said, “Hey you should shoot this,” and so I was looking at it, and the girl looking over, the people, that bird, those are all happy accidents. I mean, I try to stage those things a lot, but it depends. I try to take pride in what I do and shoot things that I think are cool, and to be honest, I’m painfully insecure about it.

Really? Why?
I could rattle off 45 photographers who are better at what I do than me.

Does it keep you humble and hungry?
I don’t know. I just really try to take the picture of the photo that I see, as corny as that sounds.

No, that’s perfect! That’s what I was hoping you’d say, because it seems like there’s a lot of you in your photos.
I don’t know if that’s good or bad, because then you’re not documenting, you’re putting your spin on what’s there. But it’s through my eye, and I guess that’s where I get really insecure just going like, “I like it.” I always feel like I’m lacking for depth or artistry. 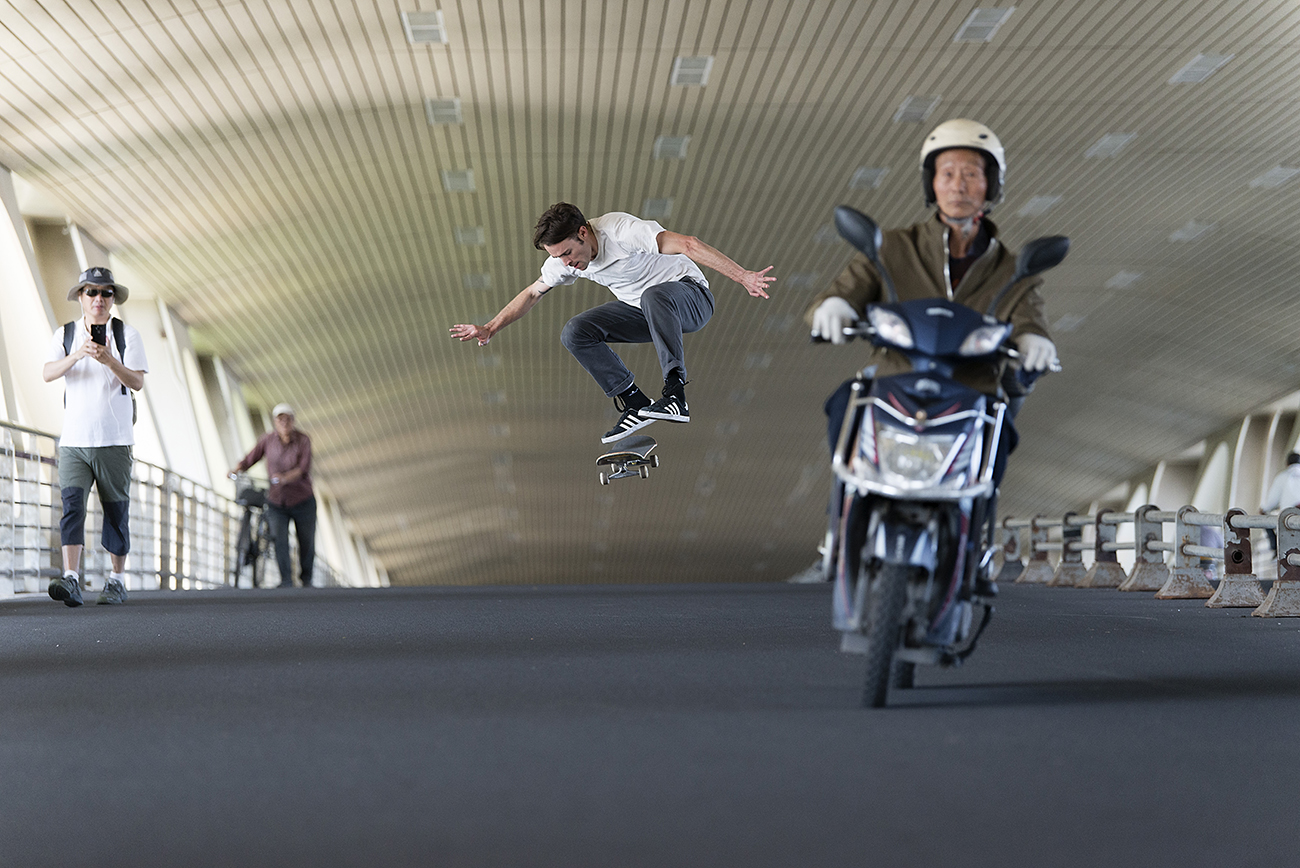 Do you start out with an agenda more often than not?
Yeah. When I’m on a trip, it’s like a turn and burn thing where they need images constantly for social media, so you can’t wait for those things to happen. Like that photo under the bridge. I could have waited, but I staged it. We were watching something else and doing some more traditional things and then I asked him to push toward me and do a few kickflips and waited for the scooter. I mean, it’s all really happy accidents in the end, but you don’t know if the timing is going to work. Is that guy going to swerve at the right time, while looking at the camera? Also … is it all going to be aesthetically pleasing? I love all of that stuff, but what’s important is the skateboarding to me. The skateboarding has to be right, and if the skateboarding isn’t right, none of that other shit matters at all.

So in a way you’re kind of enhancing the happy accident?
That’s a good way to put it, yeah. I’m trying to tell a story and that story was happening before I got there. It was happening a little further down the bridge, and if I can curate that story a little bit, I’m into it. I’m not trying to fake a story. It’s something maybe that I’ve set up or already seen, but it’s something that’s real. I’m not telling a fairy tale. Everything I do is a frozen moment in time.

Let’s talk about the street photography show at Beatnik. It’s called Still in the Streets. How’d that come together?
Well, Wes [Davis], who is one of the owners, invited me to be a part of the show. He wants me to focus on my photos from the late 1990s to early 2000s. Work that I shot mostly here in Sacramento. It’ll be mostly skateboard-related images. I know that Wes wants me to show more lifestyle oriented stuff, but I’ll show action photography from that era and a little lifestyle and portrait stuff that’s kind of the backstory to the action stuff. It’s really about street skateboarding.

Given what you’ve said, is it weird to go back and look at those images critically?
No. Not really. Only a little in that I really only like large images and I get really particular. I’m not that particular when it comes to other people’s work, but with my own work, I want it to look a certain way, so it can be a little challenging. Mostly when I go back and look at it, I just wish I would have shot more. I don’t think I shot enough. 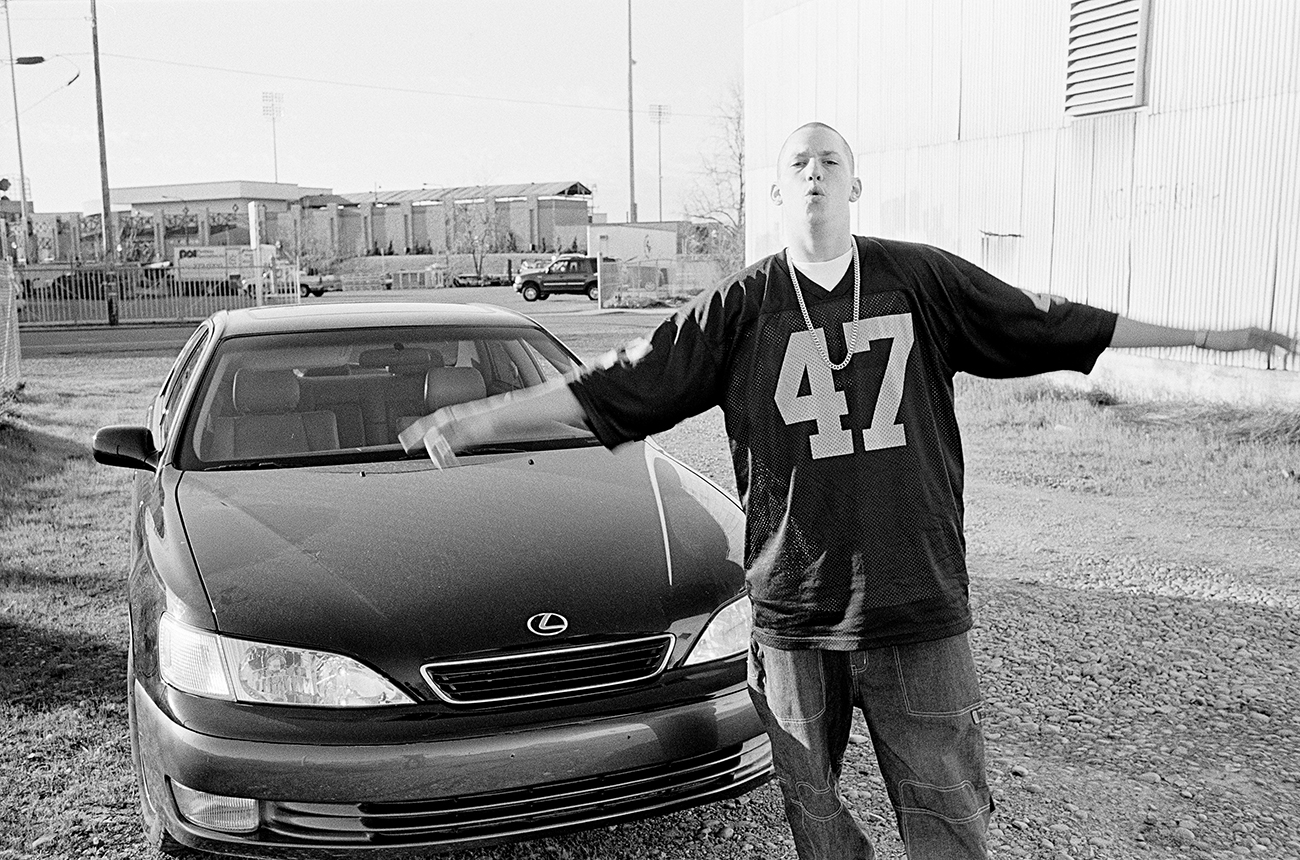 Head down to Beatnik Studios (723 S St., Sacramento) on April 6 for the opening reception for Still in the Streets, which features photographs by Jeff Landi, Kent Lacin, Marion Post Wolcott, Richard Hughes and Alexis Wilson. The exhibit, which will run through May 21, highlights four generations of street photographers. The opening reception will run from 6–9 p.m. There will be a second artist reception on May 4, also from 6–9 p.m. For more information, go to Facebook.com/beatnikstudiossacramento or Beatnik-studios.com.