“I watched a lot of Care Bears as a kid,” muses local artist Jessica White with a laugh. “I use colors all from that palette, I don’t know if that’s on purpose.”

White is a tattoo artist at Reclamare Gallery and Tattoo. She works out of the Land Park shop with her boyfriend, local artist and Reclamare owner Corey Bernhardt. Born and raised in South Sac, she didn’t make her way to Midtown until a few years ago.

White’s tattoo work is a play on traditional American, a style she describes as whimsical neo-traditional.

Her tattoos retain a youthful, fun playfulness, with a color pallette that utilizes bold, bright blues and striking pinks. If you’ve ever enjoyed the boardgame Candyland just for the elaborate, colorful board itself, you will find something to appreciate in her style.

She has a fun approach to color and pop culture elements, binding them with elements of traditional American tattoos. Her love of coffee and fantasy and cartoons is also evident in her portfolio.

One thing that comes as a surprise when talking to her is how humble she is as an established artist, making a specific point to note her group of friends as influences artistically and just all around. When she started to recall the possibility of pursuing a different career path, you could hear the moment of pause where she, for that moment, tried to visualize her life without her group of friends.

Reclamare will be celebrating their four-year anniversary with a group art show Saturday, Nov. 12, 2016.

“The theme for the show is very loosely surrealism,” elaborates White. “I have a couple digital pieces of mine that I’ll be offering at the show that would fall into that realm for sure.” 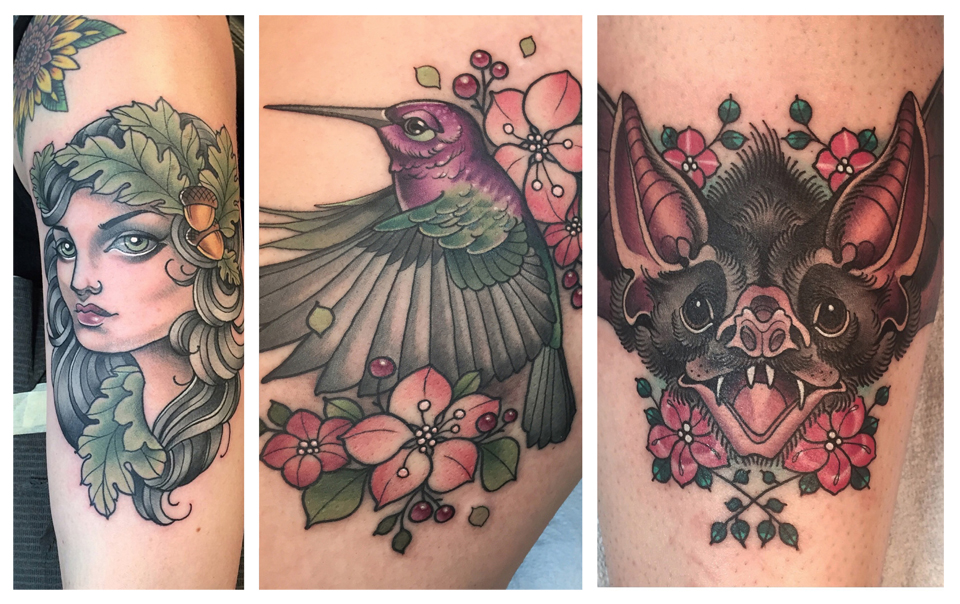 Why did you choose tattooing as a medium?
It sort of was by happenstance. I was really into drawing and art in general at an early age, but in my generation I guess, being an artist wasn’t necessarily a very lucrative career, and I was worried about that, so I actually went to UC Davis to study science, because I was good at science too, and I thought, well, I can make a living at that. And fast forward four years, I was pretty miserable, I wasn’t really happy with the path that I was on or what I was doing. So I told my parents that I didn’t want to go to school anymore, and they were really supportive, and then I started getting into photography, and thought that was going to be my artform, and I really enjoyed it, but it wasn’t 100% what I wanted to do. And I got asked to take some photos at a tattoo shop, and while I was there I started to talk to the artists about the industry and what tattooing was like, and I had mentioned that I thought it’d be something really interesting to get into, and they offered me an apprenticeship, and I was there for like maybe two weeks before I quit all of my other jobs. It was called The Body Embellished; they’re not around anymore. I just dove right in, it was different than anything else I had done before. And I really liked that I could be creative and interact with people. I was there for almost a year, and then I went to another shop in Dixon and learned a lot from them as well, before I officially was a tattoo artist.

I think that I was always surrounded by tattoos; my parents had a lot of friends that had tattoos, so maybe subconsciously it was something that I was interested in. At a young age, I didn’t know that tattooing was as artistic as it is. I didn’t know that the industry is as influenced by art. I always thought that it was American traditional and that was it. I had no idea up until I started working in the industry, that there was so much more going on, so many fine art applications being used.

Did you always identify as an artist? Were you creative as a child?
Definitely, I used to draw and color all the time. Specifically, I drew Jessica Rabbit a lot, and I drew this little girl that was from this movie Cats Don’t Dance and I drew the hummingbird from Pocahontas a lot.

My mom Sally White and my grandma Naomi White both painted, and painted around me at an early age. My mom painted things that were a little more storytelling and my grandma did landscapes, so their subject matter didn’t necessarily resonate into my work, but being surrounded by art at such an early time I think was unavoidably influential. My mom was always encouraging me to do art and supplying me with all the tools to do so. I remember her taking me on a trip to see a family friend who was an oil painter, I don’t know how old I was but we all sat at the table and they were trying to teach me how to draw a horse. I actually think I still have that drawing at home, or maybe only the horse she drew, because mine was probably terrible. My mom saved a lot of my early doodles though, I think she was pretty proud.

Unfortunately [my mom] never got to see me working as an artist. She passed away before I received my apprenticeship. But I think that her passing was another moment that signified my departure from a conventional career path and made me want to focus on something more fulfilling. Life is short as they say …

When do you feel like you found your stride as an artist?
I would say I definitely recognized it in 2015, at the end of the year. I looked back and I was like, ”This was the year, this was my year, that things really started clicking, and I really started honing on what my style looks like. And then this past year has been further delving into that, and trying to tighten my portfolio up and really make sure that everything looks like ”Jessica did that tattoo.”

I think that this last year, and the year before, really solidified that this is what I want to do forever. I never thought that I didn’t want to do it, but I was always open to the possibility that there might be something else. And now, I don’t think that I could not tattoo, it would be crazy if I didn’t tattoo.

How different do you think your life path would be if you would have just pursued the sciences?
Hugely different [laughs]. Because I was thinking about going into phlebotomy or pharmacy; I guess phlebotomy wouldn’t have been that different, still dealing with needles. I probably wouldn’t even have the same group of friends, which is really sad to think about, because my core group of friends are huge, are very, very important to me. I didn’t meet any of them until after I started working in the industry, and I think the solidity of those relationships is much due to the fact that I was really coming into my own and being more true to myself, which allowed me to connect with people on a better level. My friend group is very important to me. I don’t know what I would do or be without them and I’m so grateful to have these people in my life.

Who inspires you as an artist?
My main inspiration would be [Reclamare owner] Corey Bernhardt. He is definitely my baseline. His drive and approach to art has definitely pushed me and helped me tremendously. Watching his growth and seeing him strive to achieve what he wants out of himself artistically is extremely inspiring. As for artists whose work I find inspiring: Kelsey J. Beckett, Brandi Milne, Ly Aleister, Kelly Doty and Emily Rose Murray.

What music is on heavy rotation while you work or paint?
There’s a lot of music that inspires me to get down to work. Right now I’m listening to a lot of This Will Destroy You, because Corey listens to them a lot. And this band Eisley, and Radiohead has always been something that I listen to when I work; they are probably one of my favorite bands. My favorite album is OK Computer. There’s also a lot of Sigur Ros and The National. And also Sacramento artists Rituals of Mine [formerly known as Sister Crayon]; I have listened to them consistently for probably the last 10 years. 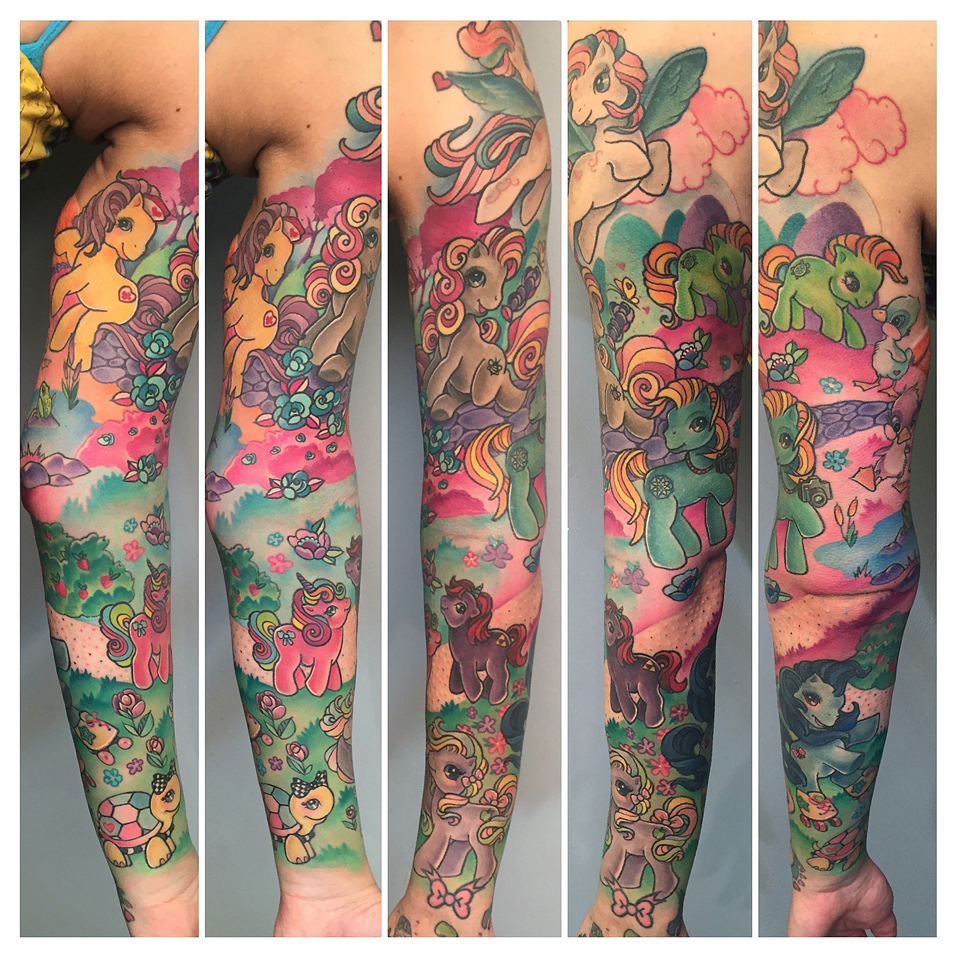 The Reclamare Gallery Annual Group Art Show is Saturday, Nov. 12, 2016 from 6–10 p.m. at Reclamare Gallery & Custom Tattoo located at 2737 Riverside Blvd. in Sacramento. The show will feature new original art and prints by some of the best tattoo artists in the greater Sacramento area on display and for sale. Find more information at Facebook.com/Reclamaretattoo.