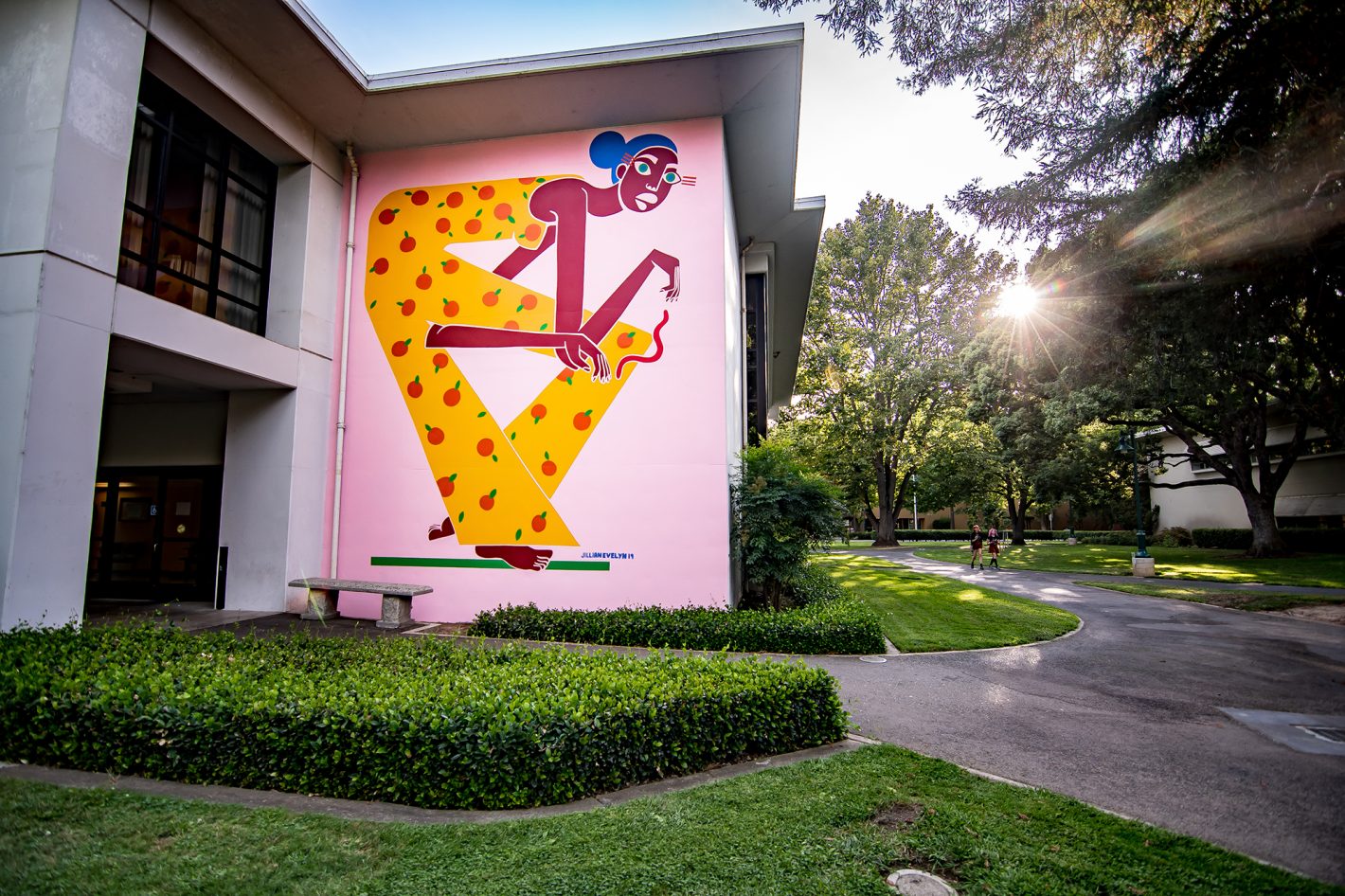 Saucy, subdued, exasperated, bemused: The women in Jillian Evelyn’s paintings often look like they are having a Monday. Her figures are nudes with pointy boobs and sharp elbows. They lounge in impossible positions on vertical planes, or contort into cramped spaces. There is, of course, a story here.

Evelyn’s parents are makers from Michigan. In fact, her whole family are blue-collar factory workers and hammer wielders. Dad worked for GM and Mom worked for Home Depot, and eventually the parents teamed up and started building houses together. There aren’t many people who can say that their parents built the house they grew up in from soup to nuts.

Ever since she could hold a crayon, no surface was safe from Evelyn. Her mom pointed out to her that from a very young age, she saw the world a little differently than other people, and she was lucky enough to get the encouragement to see that as a gift rather than a curse. Being the youngest of four and the only girl sharpened her edge, and she tended to defy gender-specific expectations from the get-go. 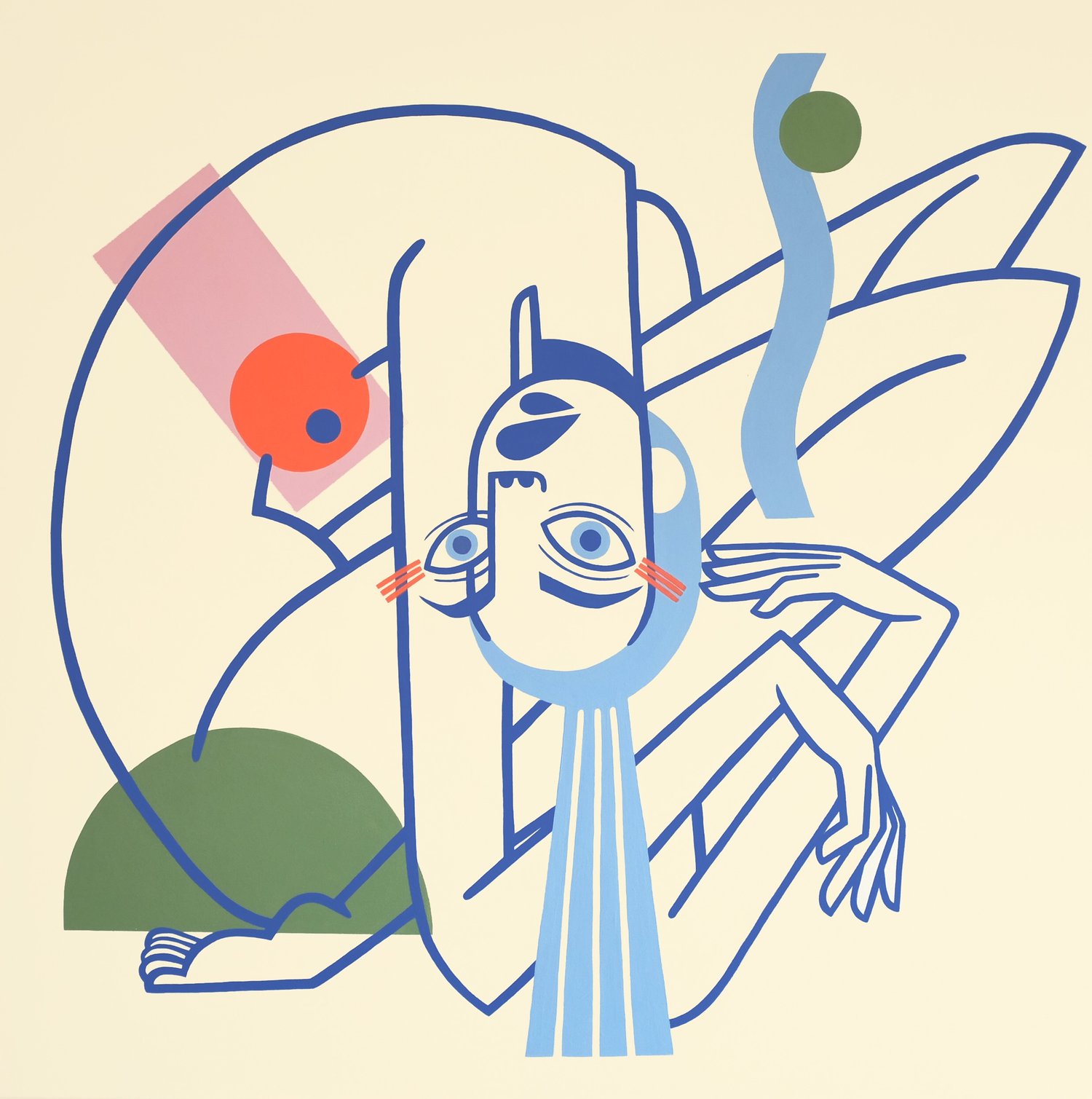 Evelyn arrived at the School of Creative Arts in Detroit with her Midwestern work ethic squarely intact and tried to meet the demands of the curriculum, although even in art school, it felt like a prescribed space she was supposed to fill. This theme of “fitting in” would recur in her art frequently. After graduating with a degree in illustration, Evelyn needed to start paying the rent. She dove headlong into the corporate world, working as a brand designer for biggies like Converse and TOMS.

Eight years went by, and she was damn good at delivering before deadline, but she would get caught crying at work. The tension between her own vision and the demands of the empire sawed on her nerves not a little.

“I just felt stuffed into a box all the time,” she told Submerge during our recent interview. 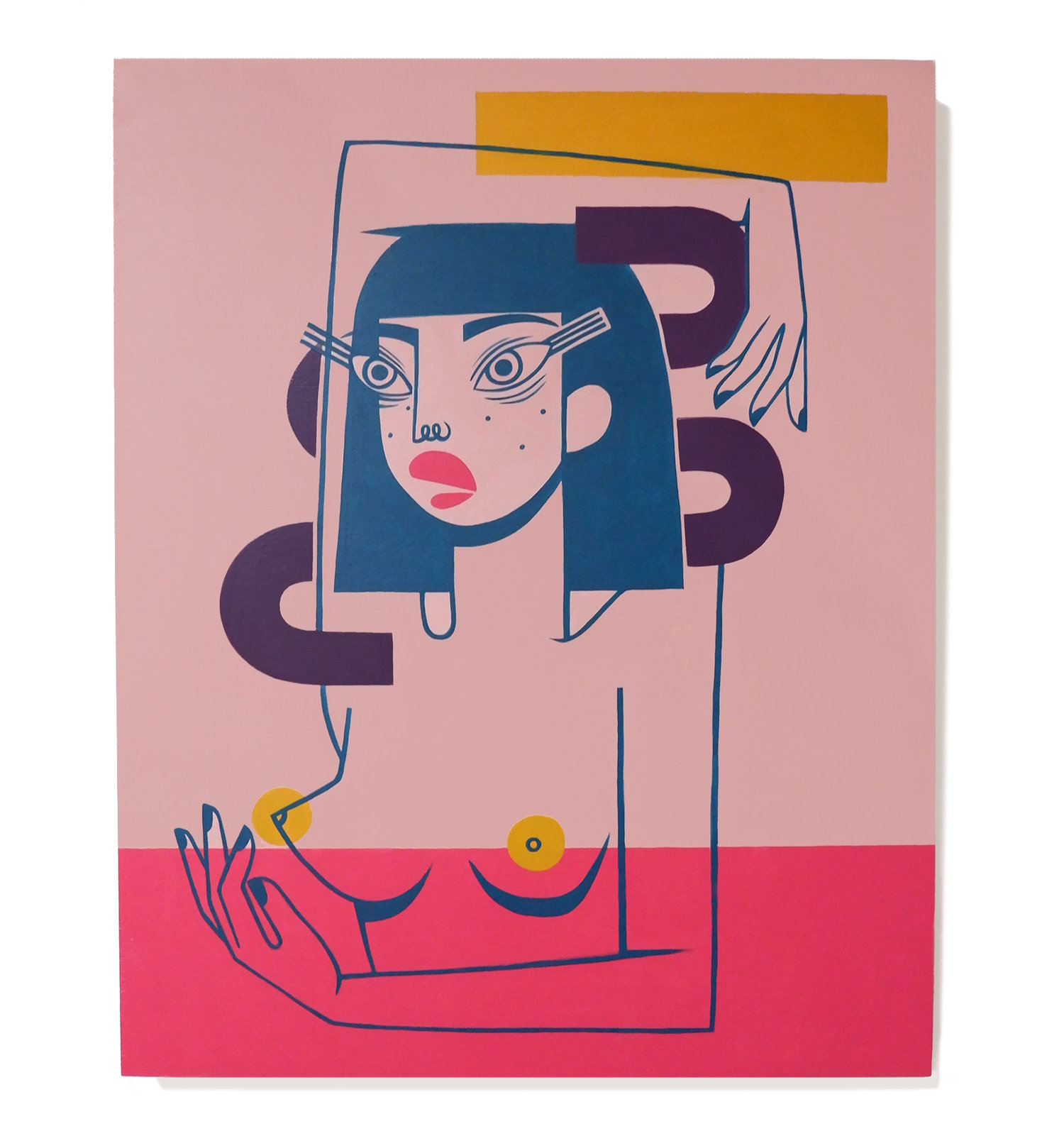 It was right around this period that the characters in her paintings started to perform what you might call static gymnastics, bending into impossible poses. Her titles are often dark-funny, like Just Peachy, and Don’t Call Me Sugar.

There is a funky, thick-lined, angular quality to her work that harkens back to Charlie Harper, and maybe a little ancient Greece. Her use of color is that of a designer: opaque blocks of neutrals with shouting complementaries like navy blue, mandarin and pinks, lots of peach. She prefers matte acrylic or even house paint and wood as well as canvas, but she also paints ceramics, furniture, skateboards and giant walls. Her “product oriented” work history means she is cognizant of waste and takes delight in repurposing what would otherwise end up in the trash.

Los Angeles definitely feels like her natural habitat, immersing her in a very lively and supportive art scene where she realized, oh wow, I’m not a freak.

Some of her ladies appear to be swan diving, or performing some kind of warped naked dance, sometimes with a twin. Some embrace animals like a giraffe-dog hybrid and some just sport really crazy pants. Evelyn has her own secret symbols that recur, “a squiggly line will represent overthinking, or a flower will signify a dead romance.” One of her pieces takes an obvious crack at Pablo Picasso’s The Old Guitarist—there is certainly a silly aspect to her characters. There are many staring-off-into-the-distance faces, and many please-just-let-me-smoke-this-cigarette-in-peace faces. 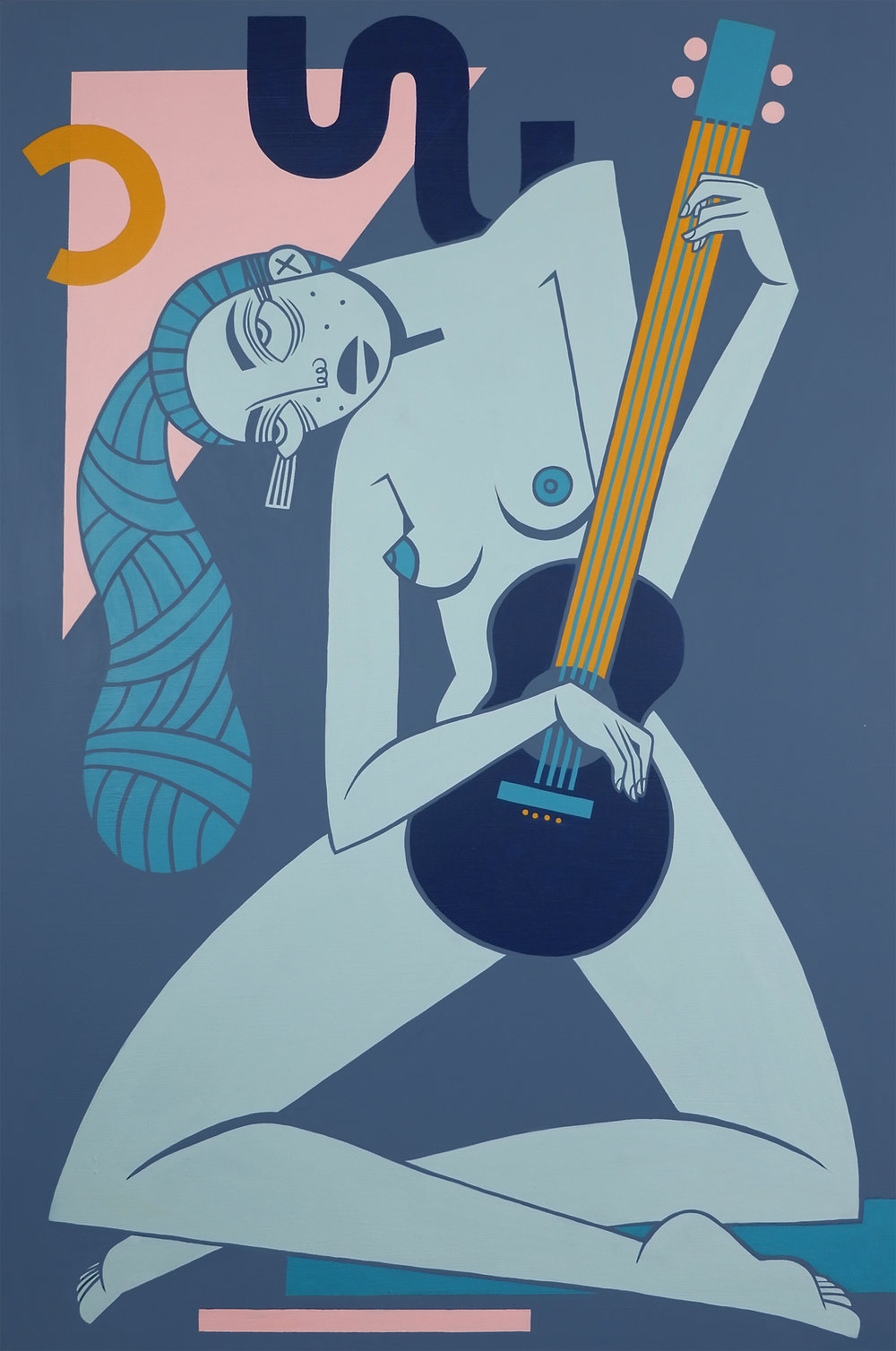 It’s a little ironic that it’s these expressions of the “unattractive,” a distinctly female display of frustration and boredom, that got Evelyn a wave of attention in the art world, namely a sold-out show at the Juxtapoz Clubhouse in Miami. Or is it a sort of poetic justice that seemingly overnight, her unimpressed darlings made her the darling of the L.A. art scene and liberated her from the cubical and the meetings with regional (for those of you that don’t know, it’s these things that make having a real job suck)?

She cut the umbilical cord about three years ago, and has since found herself going nonstop to keep up with the demand for her work. She recently contributed to a Hello Kitty 45th anniversary show at the Corey Helford Gallery in Los Angeles, and right now, Evelyn is preparing for an upcoming duo show in September at the same gallery with her friend and fellow artist, Kristen Liu-Wong. They are working with a flower theme and so she has been boning up on all the different types of flowers and what they have come to symbolize to humans. The plan is to produce a few collaborative pieces and then several works that tinker with the theme of flowers. 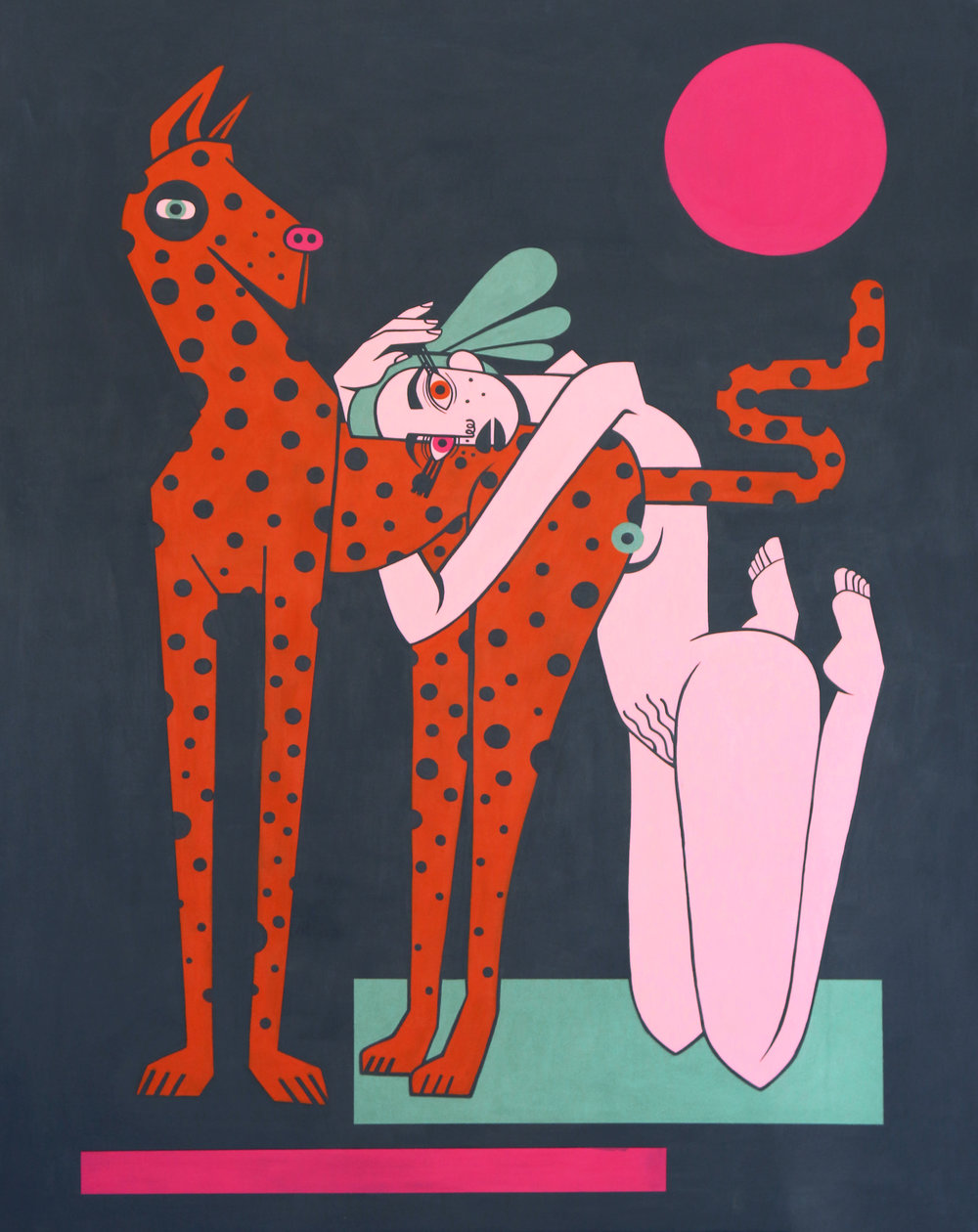 Murals are not her main jam, but Evelyn is always delighted when the opportunity comes her way, as it did when she was a featured artist at this year’s Wide Open Walls, Sacramento’s fourth annual mural festival that showcases local artists as well as international talent.

“It’s a great chance to get out of the studio, travel to cities you maybe have never been before, meet other artists,” she said a couple of weeks prior to Wide Open Walls. “And I also just love the challenge of doing something large scale.” 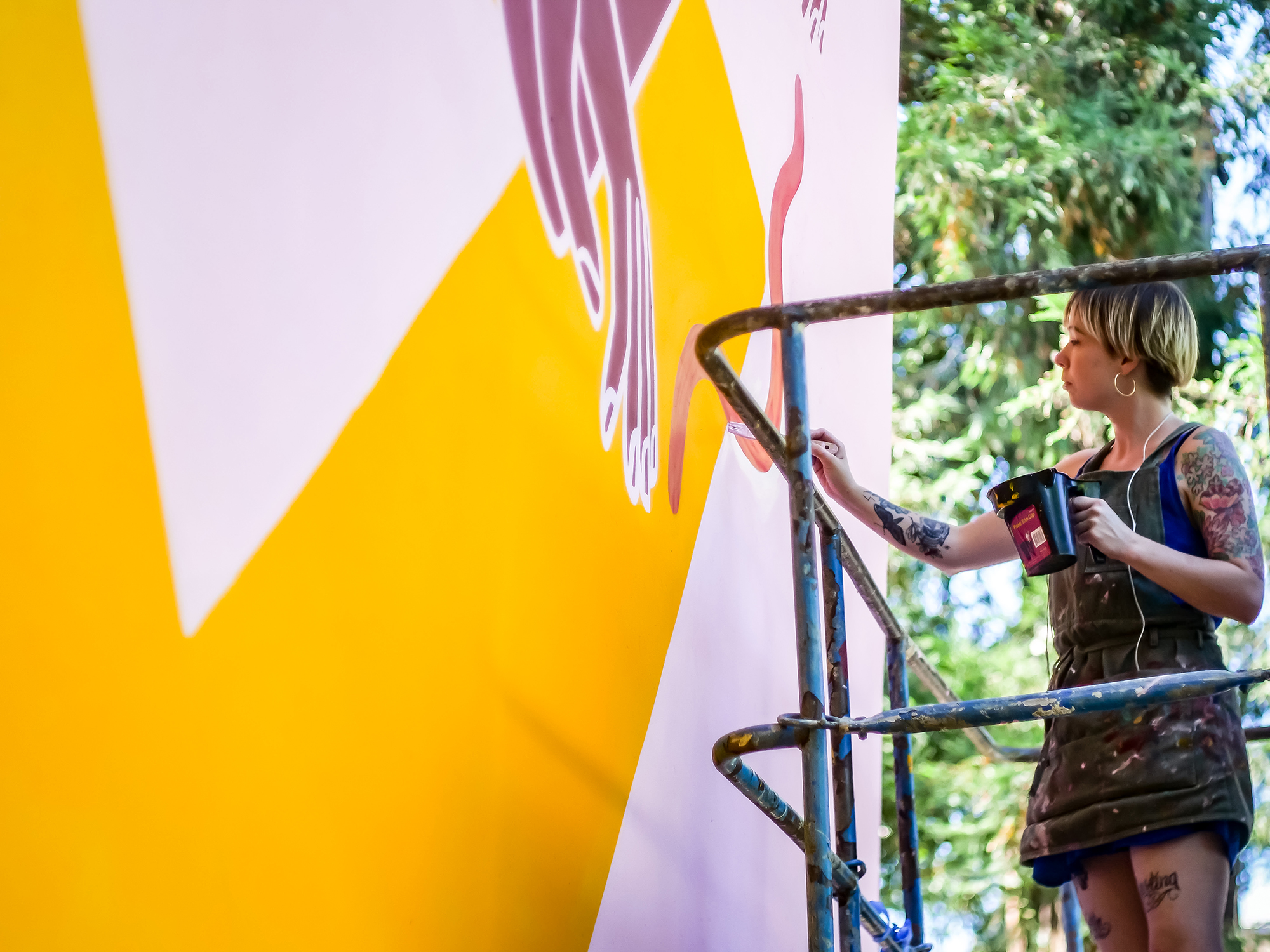 You can see Jillian Evelyn’s mural at Sac State’s Lassen Hall (6000 J St.). For more on Jillian Evelyn, check out her website, Jillianevelyn.com.