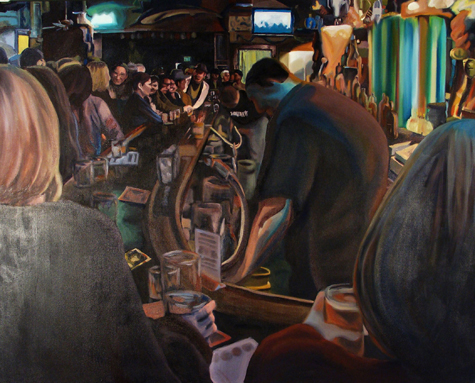 To a degree, relationships are a matter of how much time you can stand to spend with someone. With family, friends, acquaintances… Or paintings.

Sometimes, Jim Shepherd, Jr. finds his relationships consuming enormous chunks of his time, to the extent that his only moments away from it are to eat or use the bathroom.

One of these recent relationships was with a 4-by-6-foot painting of a scene inside Old Ironsides. He built the stretcher bars himself. The painting was done with oils rather than acrylics, a more arduous task.

“There was a day when I spent 15 hours just working on that monstrosity,” he recalls.

It was not unlike a relationship with a person, he adds, where it becomes a test of how much time you choose to spend around someone.

When he found it hard to break away from the painting, he knew his heart was in it. 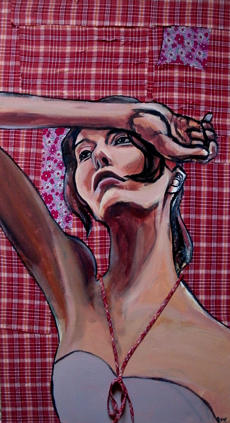 “That’s awesome to me, when your heart is so connected to something you can’t part with it,” he says.

Shepherd is a local artist. Some of his more recent pieces will be in two different shows around town this month; one of which will have kicked off at Slice of Broadway this past Saturday by the time this issue is released. The other show will open on Nov. 18, 2011 at the Vox at Thinkhouse for their one-year anniversary.

For a while, Shepherd’s paintings focused on women. He would conceptualize the women and settings to paint them in. “I think it’s my hormones maybe, or just practicing [painting] the body, I guess. Who knows?”

He has integrated fabrics into some pieces, scavenging clothing in thrift stores and then cutting them up to glue onto canvases and paint over. A plaid fabric becomes the backdrop to a painted woman, for instance, and a piece of string rests around her neck.

After painting so many women, he is finally reaching a burnout point, he admits.

Nowadays he finds himself painting places he frequents. He will bike around town and snap photos of the places he then paints: Townhouse, Old Ironsides, B Street Theatre or Tower Theatre. 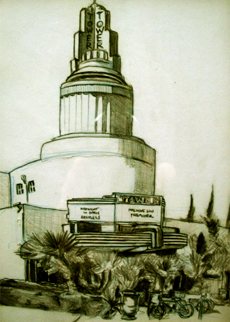 These are not concepts randomly pulled from the ether, he assures. This is a way he expresses love. Similar to his paintings, he has established a sort of relationship with these places, he says. Each location bears some kind of significance in his life.

This is how Old Ironsides, a place that has become a regular hangout for Shepherd, became subject matter for a painting.

Now he is working on painting the eerie two-story house at the corner of H and 21st, just down the street from Old Soul at Weatherstone. The fine details, the shingles of the house and whatnot, has made it another time-consuming piece.

Another common theme in his paintings is images accompanied by words, either lyrics from songs or quotes from books.

He pulls out a framed canvas from his backpack. The bottom layer is black floral fabric pasted down. Over it he painted bottles of alcohol and the words, “No, free spirits ain’t setting no one’s spirit free,” a quote from the song “Woo! Alright, Yeah… Uh Huh” by The Rapture.

“I’ve always liked the idea,” he says. “Even though you’re drinking doesn’t mean you are having a good time.”
This recently completed piece will be on display at Slice of Broadway. 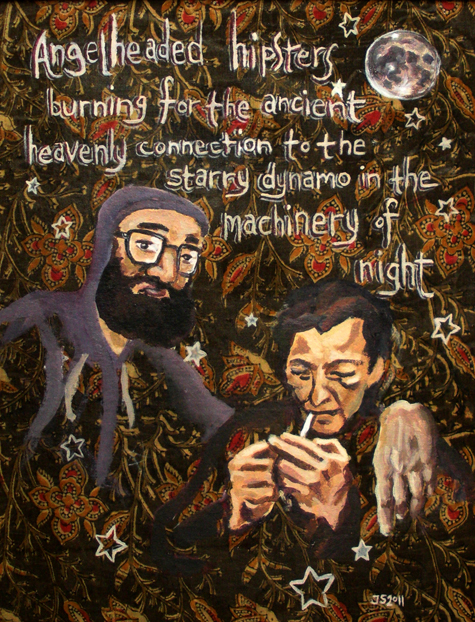 Sometimes his intrigue with his surroundings is overwhelming, he says, to the point that he has trouble focusing on ideas.

Now he is exploring the idea of moving beyond painting pictures to “maybe start seeing the world around me in a sense and commenting on it, being a little bit more reflective.” 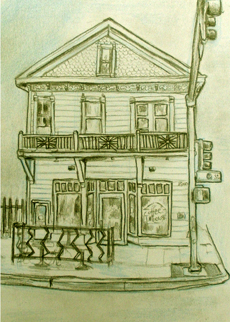 Another project he has begun to plan involves creating art that the blind can experience.

“Someone that paints like this, a blind person wouldn’t know what the hell this is,” he says, tapping on his painting.

When it comes to visual art, “there’s this whole world that I can experience that they can’t,” Shepherd explains.
The project is still in the conceptualizing phase, but the pieces will be primarily based on touch, using different textures. Shepherd is looking for an ADA-compliant location to feature the exhibit and people to spearhead the project with him.

What is truly rewarding, he says, is the ability to emotionally move people with his art. Ideally, he would like to move strangers enough that they will want to buy his work.

Like many struggling artists, though painting is his passion, it is not his primary source of income.

“That would be fantastic if it was,” he says. He graduated from Sacramento State last year with a degree in art studio. Ideally he would like to continue school, possibly enter a master’s program. He could use the discipline, he says.

Money is an issue, though. Compared to other artists, Shepherd asks very little for his work, he says, making it difficult to sustain an income this way.

For now he works 40 hours a week, making enough to pay for his small apartment in Midtown.

It’s not the most ideal setup for an artist, and he finds himself often working with “shitty lighting.” Despite limited resources, though, he plans to create, come hell or high water.

See Jim Shepherd, Jr.’s work now at Slice of Broadway, located at 2424 16th Street in Sacramento. More of his work will be on display later in the month starting Nov. 18, 2011 at Vox at Thinkhouse, located at 1818 R Street, also in Sacramento.