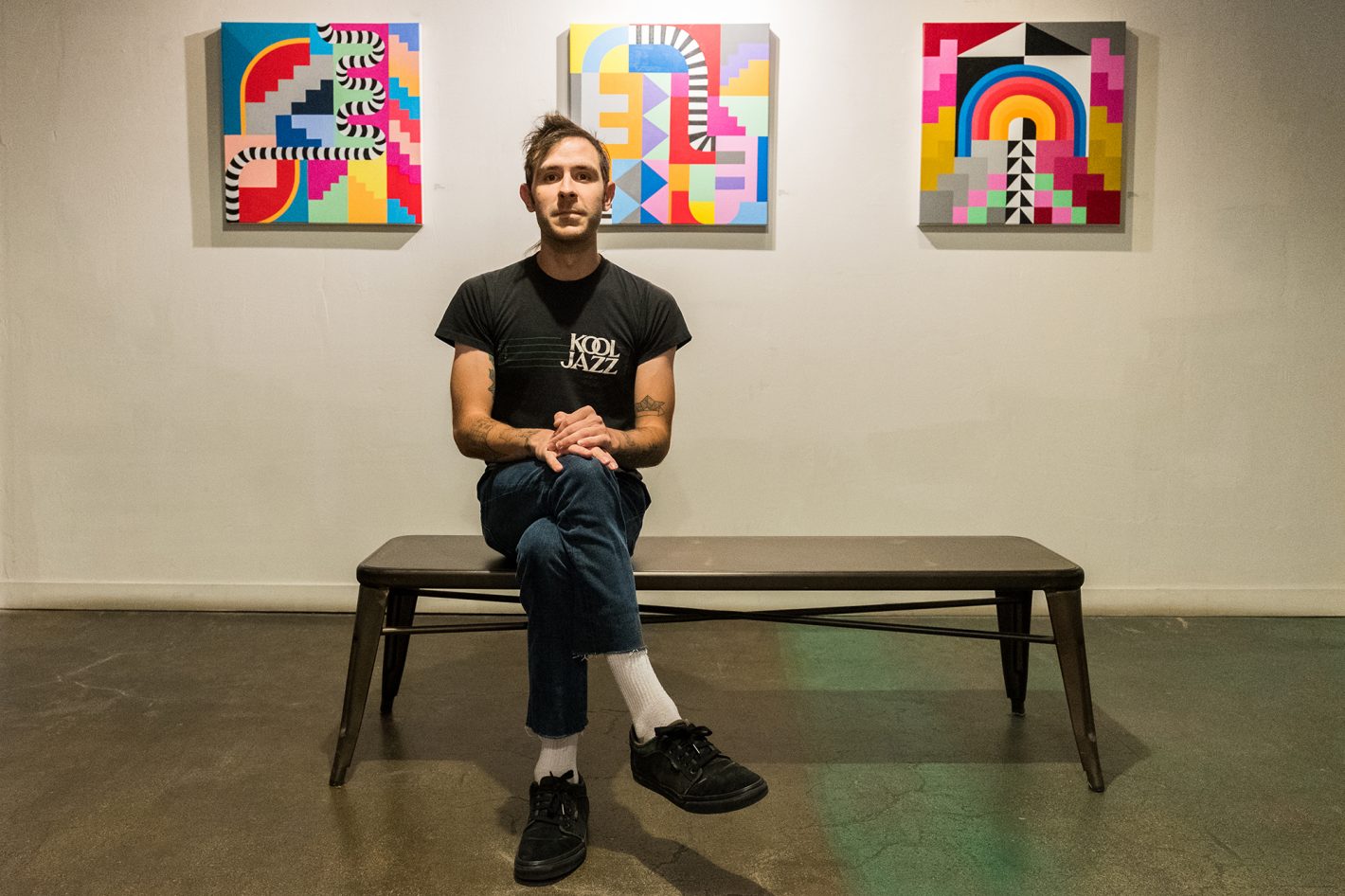 Jonathon Bafus considers himself a musician first, but he’s also a talented painter. The Sacramento artist tends to blur the lines between music and art when it comes to his creative process. Typically, you start with an idea as a springboard, but as you dive in, the idea shapeshifts so that concept meets reality. But art is tangible, and music is not. What happens in an audio landscape is a moment in time that passes; changes in visual landscapes are permanently recorded in layers of paint, even if painted over. Bafus enjoys where these worlds collide, and how they differ, and so he makes time for both art forms.

Fittingly, Gentleman Surfer, the band Bafus plays drums for, self-describes their music as “adventure music.” When pressed for a comparative description, Bafus says the closest artists would be Frank Zappa and Devo—both highly artistic performers, though those muses are always changing for Bafus, musically. Gentleman Surfer just completed recording a new album, Hard Pass, a couple of weeks ago, for which an album release party is currently in the works.

Bafus’ brightly-colored, geometric yet organic works will be on display at WAL Public Market (1104 R St.) for a month, beginning First Friday, Nov. 3, 2017, in a solo show entitled Cubic Fruit Plate. Each piece featured in the exhibition has the capacity to induce a trance-like state as you stare at the shapes created in structure and chaos.

A Foothills native, Bafus now lives in the Warehouse Artist Lofts with his fiancée, Trisha Rhomberg—a fellow artist and co-owner of local boutique Old Gold—and their 3-year-old daughter, Elide. We sat down to discuss Bafus’ process and passion for art, in hopes that you, our readers, will go take a gander at his awesome show this month while you can. 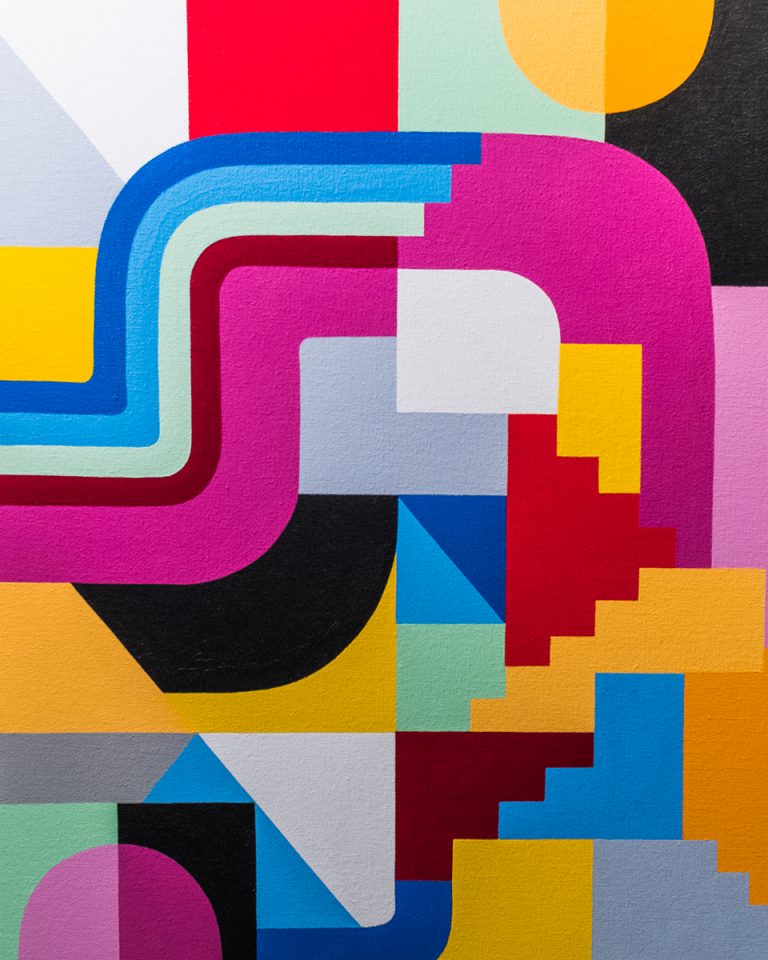 Do you plan shapes and design ahead of time or does it take form as you go?
A little of both. I usually start with a very basic idea, and there will be a couple of shapes I want to work around or some sort of overall balance I want to create, but once I start making a couple of the forms, I’ll work off that and change my mind a bit as I go. It becomes pretty organic and the choices aren’t terribly difficult once it gets going.

When it gets toward the end of it, the choices get harder and the room for error gets slimmer. I’m a slow and methodical painter. It’s about the process for me, and it’s meditative, so I’m not really worried about how long it takes. It’s done when it’s done.

Do you ever get to the end part and fuck up? Do you work with it or scrap it when that happens?
I don’t usually scrap the whole thing; I will end up changing a whole part of a painting based on one mistake, though. It’s when you get to the end that it becomes critical, and that’s when I start cursing out loud the most. Usually I’m on the floor on my stomach, with a flashlight in one hand and a paintbrush in the other, looking at it from, like, an inch away, burning a hole in my eyes. That’s the only way I can look at it at that point to make sure the edges are right.

You talk in your artist bio about being interested in structure and chaos. Can you talk a little more about that?
That really applies more to my music. It’s true of art, too, but a snail-paced version of that, and I can always fix things. When you’re playing music, you can’t fix things; they just happen the way they happen.

What materials do you use when you paint?
I just use acrylic, and I usually paint on canvas or panel. I’m back and forth between the two. I can’t fully decide which one I like the best. An analogy is my drum kit that I use. I have a few things that I like for different reasons, and I always go back and forth. So when I’m on canvas, I’m like, “Oh man! I can’t believe I don’t always use this!” Then I go back to the panel and I’m like, “Why haven’t I been using this the whole time?! It feels totally different and so cool.”

I don’t tape edges or anything, I just use brushes and get real close. I’m totally obsessed with brightness and opacity. You’d probably never be able to tell, but I go over the areas on paintings, like multiple times. It’s sort of the only way I can be pleased with it and not see the light shining through.

Does your daughter get into doing art and music with you?
She loves painting and coloring and stuff. Coloring a little more. Music we’ve dabbled [with] a little bit. She’s got a toddler’s attention span, so she’ll try stuff out for a minute, at best, and want to move on. So I’ll get all this paint stuff out and lay out a mat, and she’ll paint for, like, three minutes and be done. Or I’ll put her at the drums and she’ll tap around for 30 seconds and be satisfied. It is something we do together. I can tell she’s interested. At that age, they just want to try stuff out.

How do you balance fatherhood, work, music and art?
It’s really hard. Right now I’m a stay at home dad, which I’ve been doing since January. It’s different and I really like it, but it’s stressful in its own way. It feels harder than going to a day job, because I care about it more, obviously. It’s got a whole emotional rollercoaster element because I’m not—I hate to say it, but—phoning it in like I would at some day job. I haven’t really found the job of my dreams that I’ve worked at yet, so it’s usually just kind of getting it done and going home. 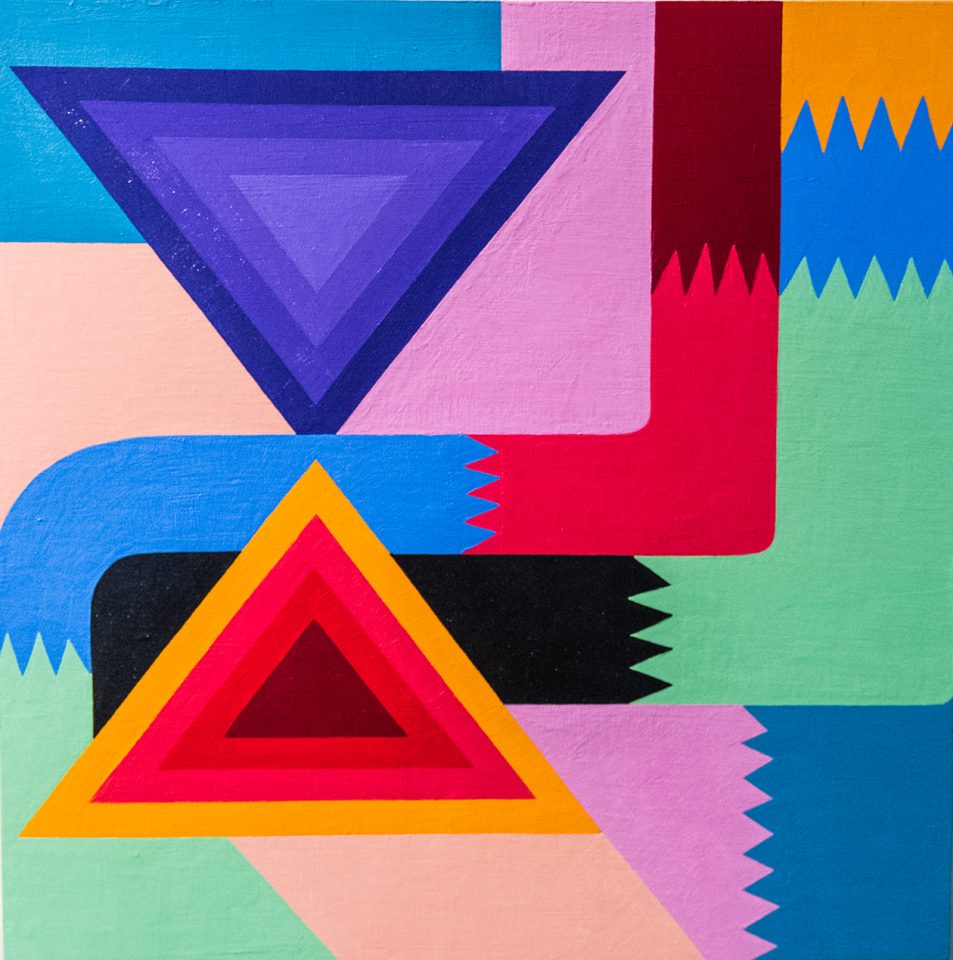 The balance thing is really hard. With painting, I’ve kind of had to prioritize, and so I don’t paint much. Every once in a while I get into a big creativity spurt, but generally I have to choose. Music is something I have to do every day. Painting is something I can live without every day, although I would like to do it constantly. I hadn’t painted in quite a while before the beginning of this year, and then I started trying to do more, and I got some encouragement to do more. I’ve had to trade in a lot of days of practice that I wish I’d had.

There’s sort of an anxiousness thing. Playing drums is an essential part of my daily well-being. If I don’t do it for a couple days, I start to feel really anxious and everything is just off. But I don’t feel like I’m going to explode if I miss a day painting. I envision myself painting constantly when I’m an old man and I can’t do anything else. That’s my distant dream.

Jonathon Bafus’ solo exhibit Cubic Fruit Plate is on display now through the end of the month at WAL Public Market, located at 1104 R St. in Sacramento. The market, which also features a number of local eateries and shops, is open to the public from 8 a.m. to 9 p.m. Monday through Saturday, and from 11 a.m. to 9 p.m. on Sunday’s. For more information, visit Walpublicmarket.com or Facebook.com/WALPublicMarket.