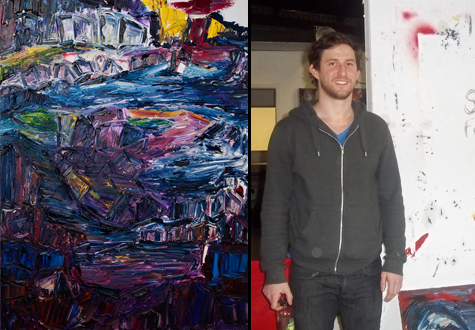 For Jon Mess, Music and Art Share a Similar Rhythm

Artist Jon Mess might be the only human example of going from zero to 60 and back in 3.5 seconds. One second he is thrashing paint on a canvas with quick and forceful strokes; the next he is stopping and staring intently at the chaos before him. He likes to start off a painting at a very fast pace but then slows down to analyze each stroke. At times he will stare at his work for more than 30 minutes.

For the past 10 years, Mess has experimented with various art forms including painting, graphic design, writing song lyrics even perfecting screamed vocals. His causal demeanor and laid-back personality make it seem surprising that his well-known talent is screaming lyrics in front of raving fans. He has been in the spotlight as a vocalist for Sacramento’s post-hardcore band, Dance Gavin Dance, but has been under the radar as a talented local artist. Each creative side of him represents the perfection of organized chaos; that can be heard in the vocals and seen in his art.

“I try and create a sort of rhythm with the strokes…like the way that music or notes would go up and down on a scale,” Mess said while sitting on a bench outside of his art studio. “I like the element of just going at it and moving real fast but at the same time I want to have balance and stability and take into account [the] formal element of art.”

His abstract artwork is full of bright colors and sharp strokes that leave no empty space on the canvas. Each piece of art is completely open to interpretation and everyone will have a different opinion on what the image is or what it means to them. It’s a “choose your own adventure” art show, Mess said. One minute you might see a rabid zombie dog but after a close examination you might see two eerie dark figures appear in the painting. 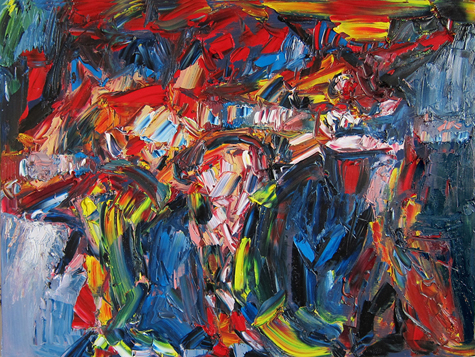 To get started on a painting, Mess lets his natural intuition and spontaneous side work together. “That’s one of the main things about my process is that I don’t work from an image or I don’t usually work from an idea,” Mess explained. “I put a mark on the canvas, then another one and then it starts to look like something.”

But if Mess does have a sporadic thought in his head it normally comes out as a painting, a lyric or sometimes both. From the most recent Dance Gavin Dance album, a song titled “The Robot with Human Hair Part 2 Â½” contains three words that seemed to cause a small uproar with some of his fans.

If it works, it fits in the song and fits on the canvas, why do I need more meaning than that? Why can’t I just paint anything?”

Having a creative process isn’t new in his family; in fact his artistic talent could prove that the creative gene might be a dominant one. Growing up he watched his mom sculpt clay vessels and “curvy vases”; he worked for his uncle, a veteran artist who builds massive metal creations; he is related to one of the animators of the legendary cartoon show The Simpsons; and his cousin works for the art department at UCLA.

“Why is everyone an artist? This must be genetic,” Mess said about his artistic family history. “My mom always had a studio attached to the house with kilns, a potter’s wheel, clay and paints. I learned and did sculptor clay when I was a lot younger and I starting painting when I was 16.”

Since then, he has completed many paintings that he is ready to share with the Sacramento community. Starting on April 14 the FE Gallery will display some of his work for his fans and art enthusiasts to enjoy. He is excited to move all of his artwork from his current studio (that he shares with other local artists in downtown Sacramento) and formally hang it in an official art gallery. 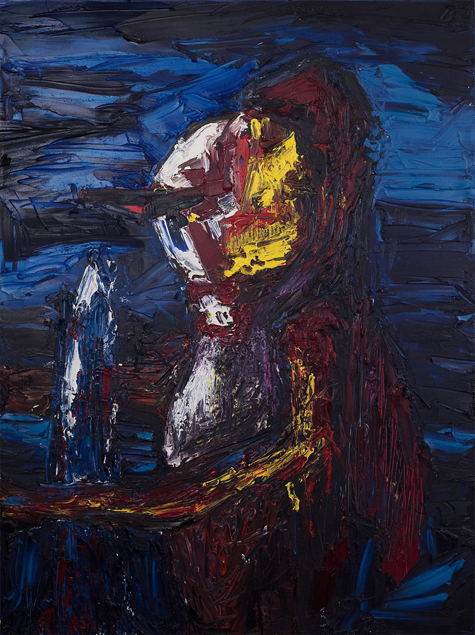 The final product of the art show will have a completely different vibe than Mess’ current workspace. At first glance his art studio resembles an abandoned warehouse, but after walking inside and smelling the paint fumes, anyone could sense the hard work that surrounds the studio. The crowded building is divided into multiple messy workstations, and it’s hard to tell where one art station begins and where the other one ends.

But this environment is a recent upgrade from working at home in his apartment. “I was getting paint on the carpet, the walls, my hands, bathroom and my cat. [It] would get on him and he would track it around,” Mess said. “So out of necessity I had to move it all out. It’s been really nice.”

His upcoming show will be his first official gallery show, apart from college galleries at Sacramento State. While attending college, Mess studied electronic art and started to feel out his interest in post hardcore metal music. This slight interest and curiosity led him to become a famous hardcore screamer, a skill that he happened to pick up randomly.

“I didn’t know what I was doing at all at first and there was no real guidebook,” he said. “I asked a vocal coach at Sac State and they were like, ‘You are going to destroy your voice. You can’t do this. You’ll have no career.’”

If Mess had believed the unfaithful coach, he wouldn’t have toured with Dance Gavin Dance across the United States, and he wouldn’t have been called a “resident screamer” by Alternative Press. After being told he would have no career in screaming, Mess ended up headlining Sacramento State with his band almost right after his graduation date. But in terms of his future career, Mess is a little unsure of where his art will take him. He is going to “play it by ear” but doesn’t plan on slowing down anytime soon.

“I’m trying to stay within the creative field but in terms of what specific path it’s going to take,” Mess said. “I know that I can always just paint forever.” 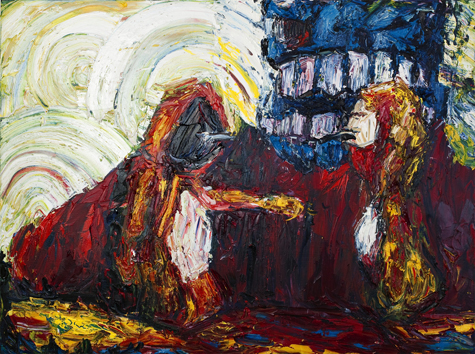 Check out the works of Jon Mess at FE Gallery. The exhibition will run through May 3, 2012. The gallery is located at 1100 65th Street, Sacramento and can be found online at http://www.fegallery.com/. If you’d like to see more of Mess’ artwork, go to http://jondmess.tumblr.com/.