Portraits of the Artist : Julie Heffernan

Heffernan's work are courtesy of the artist and Catharine Clark Gallery

Julie Heffernan on her process, self-portraits and the reclining nude

1814—Jean-Auguste-Dominique Ingres finishes La Grande Odalisque, a work that becomes iconic for multiple reasons from various critical perspectives. It’s Orientalism at its finest or worst, an example of neoclassicism betraying reality, an introduction to the gendered gaze and a document of patriarchy’s ridiculous ideas about female bodies as objects and their lack of agency. These ideas might seem current, because they are; but the work, the painting itself, is now two centuries old.

And yet, one of the first paintings one is likely to see at Julie Heffernan’s current exhibit at the Crocker Art Museum is her work Self-Portrait with Talking Stones, and immediately it’s impossible not to see the intertextual play between the Ingres work and Heffernan’s central figure.

In both works we encounter the female nude in an elaborate framework, one lush in figurative wealth, the other a wealth of figurative detail. While the Ingres work is a perfect distillation of patriarchy, Heffernan’s Talking Stones is a critique of not only the elements of Ingres but also the dominant forms and aesthetics that have been derivative of and since Odalisque.

“She is the closest to a reclining nude that I’ve ever done,” says Heffernan. “As I’ve said before, I’ve got a real problem with the reclining nude. How do you give the female agency when you take the vertical stance from her and have her sit or recline. I wanted to have her body speak.”

In Heffernan’s framework, the nude is challenging her placement in the work. She’s placed upon a series of stones that serve as historical reminders Greco-Roman, spiritual or otherwise. These stones become the divan upon which the nude rests. The “exotic” peacock feathers of the duster in Odalisque become a maternal mound of dead birds and fruits heaped upon or emerging from the nude’s genital region. It’s not ripe, as we might think of the precision, delicacy of the still life form, its various bowls overflowing with fruit and remnants of rural continental labor. Rather, this is both abundance and loss, a bounty of sweet over-ripe stone fruits and the end of a sexuality rooted in reproduction—specifically for Heffernan, hers. 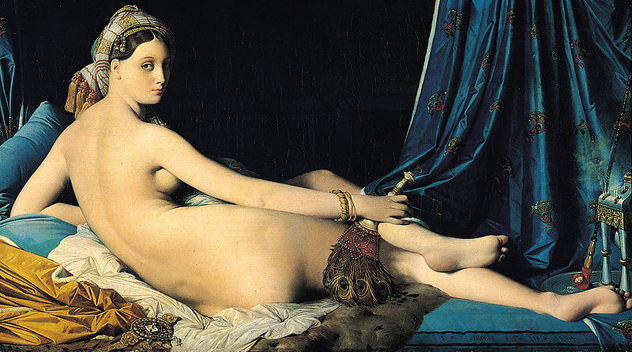 These adornments are important to Heffernan. They—these dead birds, wasted fruit—are anything but arbitrary, as they repeatedly appear in various ways throughout her work. Yet, the unique thing about Heffernan’s paintings is that the macro, which seems so important at first, isn’t exactly the takeaway. Instead it’s the little things that give her works weight.

The minute details, the micro of Heffernan’s works, often become the most rewarding parts of her paintings. In person, it’s not the nude figure that weighs on the viewer. Instead, it’s the man fighting a grizzly bear in the right distance; the evangelical, ghostly figures praising what appears to be a wine bottle just below the fight but in the foreground of the large tree that anchors the right side of the frame; the person in a full-body cast and hospital bed further to the right; the miniature man about the size of one of the dead game-birds mentioned above, climbing into, or mounting perhaps, the iron-railed bed next to the pelvis of the nude, birds, fruits and all; the ship ablaze just left of center of the canvas, floating down a river that has also inundated a series of buildings from which no living people emerge; or lastly the peaceful serene sky that floats behind the nude’s head, a stark contrast to all the death, danger, tension, violence and history visible at every other point of this painting. 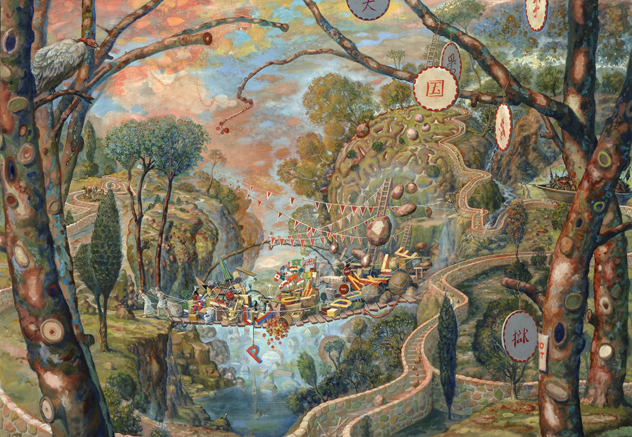 Despite all this, the nude, the figure, the face of what can only be understood as a projection of Heffernan herself, gazes back at us, the viewers. She’s calm, confident, powerful—despite her placement, slightly reclined, in the work. This look too asks us to confront, as viewers, our desire to see, voyeuristically, trauma and tragedy in the artwork itself, in Heffernan as an artist, in her self-portrait.

“The title ‘Self-Portrait’ started when I kind of rejected any human figure in my work,” explains Heffernan. “This was way back in the ‘80s. There was the whole discourse about the male gaze and the objectified female nude, all those problematics were clear to me. The feminist writings, like Laura Mulvey’s “Visual Pleasure and Narrative Cinema,” they really hit me, they opened my eyes. It was clear for a while that the nude, the female nude, had to rest. But I still wanted to paint about my own female experience. That was when I moved to these large-scale still-lifes, and I used them as backdrops for the image streaming process that I had been experiencing, where pictures would flood into my head.”

Heffernan describes her artistic process as a sort of prayer, though she denies any particular religious affiliations even if they do appear from time to time in her paintings. When beginning a new work, she sits and waits, for days on occasion, until she finds an aperture which allows her to begin a work. Often this initial impulse is discarded, but it inevitably leads to the actual subject or content she will spend the next two months bringing to life. Sometimes this process takes years, and the negotiation between the large central figures and the minute background details are the delicate elements that Heffernan has to balance. 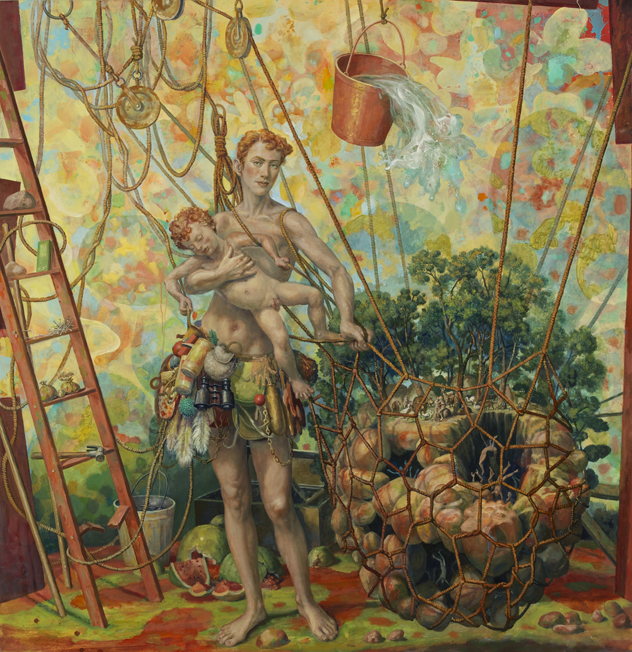 Once she’s comfortable with the larger setup, she begins to develop the smaller aspects of the works. This she calls the “culture” of the painting.

“At a later stage,” she explains, “I know the world and now I want to give it culture. I’ve built the buildings, I’ve laid out the thoroughfares, and then I want to start to parse the fine points of this world, the culture of this world. That’s the point where the intellect gets engaged. It has to do with scanning broadly. I’ll leaf through tons of books and wait for things to pop out as relevant to the world. Sometimes they’re in textual form, and sometimes they’re in image form.”

This act of discovery, of reference, Heffernan describes repeatedly as a journey of sorts. As an artist she attempts to enter the canvas through the paradoxical application of layered paints:

“I’m always trying to go into a hole; the canvas proper, the canvas parameter is the initial hole, a white hole. You enter that, and I’m always adding, trying to cut into deep space, cut into it even deeper.

“I deal with everything from the experience of being a maker. The joy of losing yourself in the tiny muscle movement of hands of creating something is really the best, the only escape we have from our horrors.”

These horrors are both real and imagined, as one can see in her works, actual tensions and fantastic circumstances. Because the works are so large, the details so overwhelming, they feel like paintings of Hieronymus Bosch with a slightly less surreal accumulation of minutiae. These immense tensions are what make Heffernan’s works so current. These are projections of herself, as citizen of our century, America on the sharp edge of financial and militaristic empire, a globe on the verge of environmental collapse. In short, the readings of environmental concerns and allusions to the contradictions of globalization seem entirely apt. 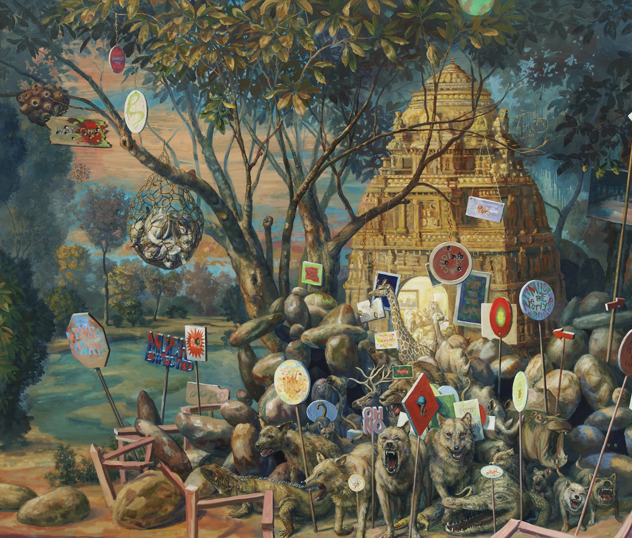 As an example, in Millennium Burial Mound, wolves and other predators break forward into the painting and the foreground over a shoddy fence that limits their movement through space, as we increasingly see with diasporic communities and the fenced borders around the globe. And though Heffernan is conscious, both in her works and in our interview, to distance herself from a critique of consumerism, she’s perfectly fine discussing the other two large issues of environmental degradation and globalized society.

She emphasizes, “We can’t support it. We are so clearly on a cusp, and I feel it viscerally in a way I would never have anticipated. It’s a factor of your sensitivity extending out beyond your own bloodlines, through your kids, out into your community and even further out into the world. It’s clear to me, even though it’s a bit of a sky-is-falling, Chicken Little trope, an end-times kind of cliché, that any talents I had to say something, I had to use.

“This is the largest conversation of our time. I’m constantly flummoxed—as artists are the nerve center of a culture—and I’m just wondering why everyone isn’t on this, like we were in the ‘60s to end the war. It seems so urgent.”

“It” for Heffernan is both our environmental condition and the logic that predicates this condition, the uneasy acknowledgement and urgent silence of the media sphere. Within the world of her paintings, her subjectivity, Heffernan is an everywoman of sorts. Her inner thoughts and ideas become projections and gestures that seek to move beyond her singular experience. However, Heffernan is also, quite simply, an artist attempting to represent her socially conditioned mindscape.

“I simply paint what appears to me,” she says, “and I realize later the communion between what I’m doing intuitively and then what turns out to have been happening in my body that I wasn’t even thinking I was addressing.

“The thing I love about painting is that it’s an encounter with another being, via their touch. They’re gone from the room, their painting is left on the wall, and you can feel their touch in it.”

If this is Heffernan’s version of success, then she’s accomplished it. There’s no doubt that in her exhibit, Sky Is Falling, there’s a sensual encounter with the qualities of Julie Heffernan, and therefore the greater world around us, rooted in experience, bodies and touch. 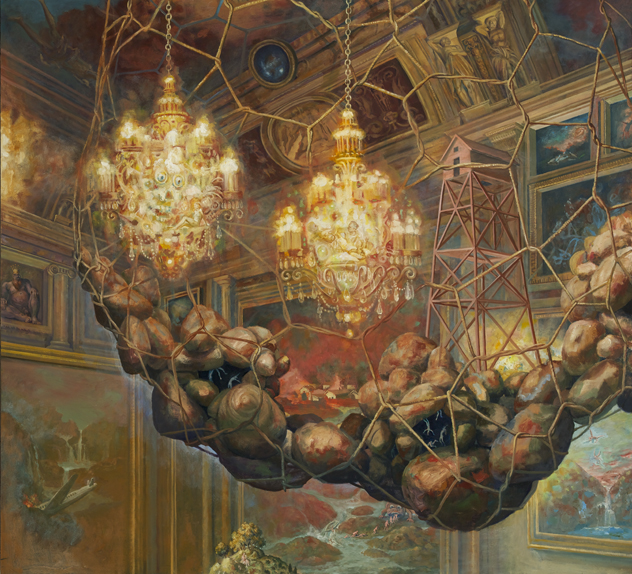 Sky is Falling: Paintings by Julie Heffernan is on view at the Crocker Art Museum (216 O St.) until Jan. 26, 2014. Visit Crockerartmuseum.org for more info. Drop by on Jan. 26 from 1 p.m. to 3 p.m. to meet Heffernan and hear about her works directly from the artist. 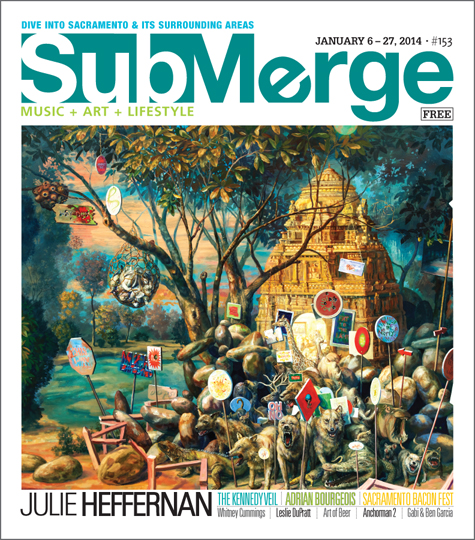