The Wanderer • Juliette Belmonte Has Seen a Million Faces … and Painted Them All (Well, OK, Not All of Them) 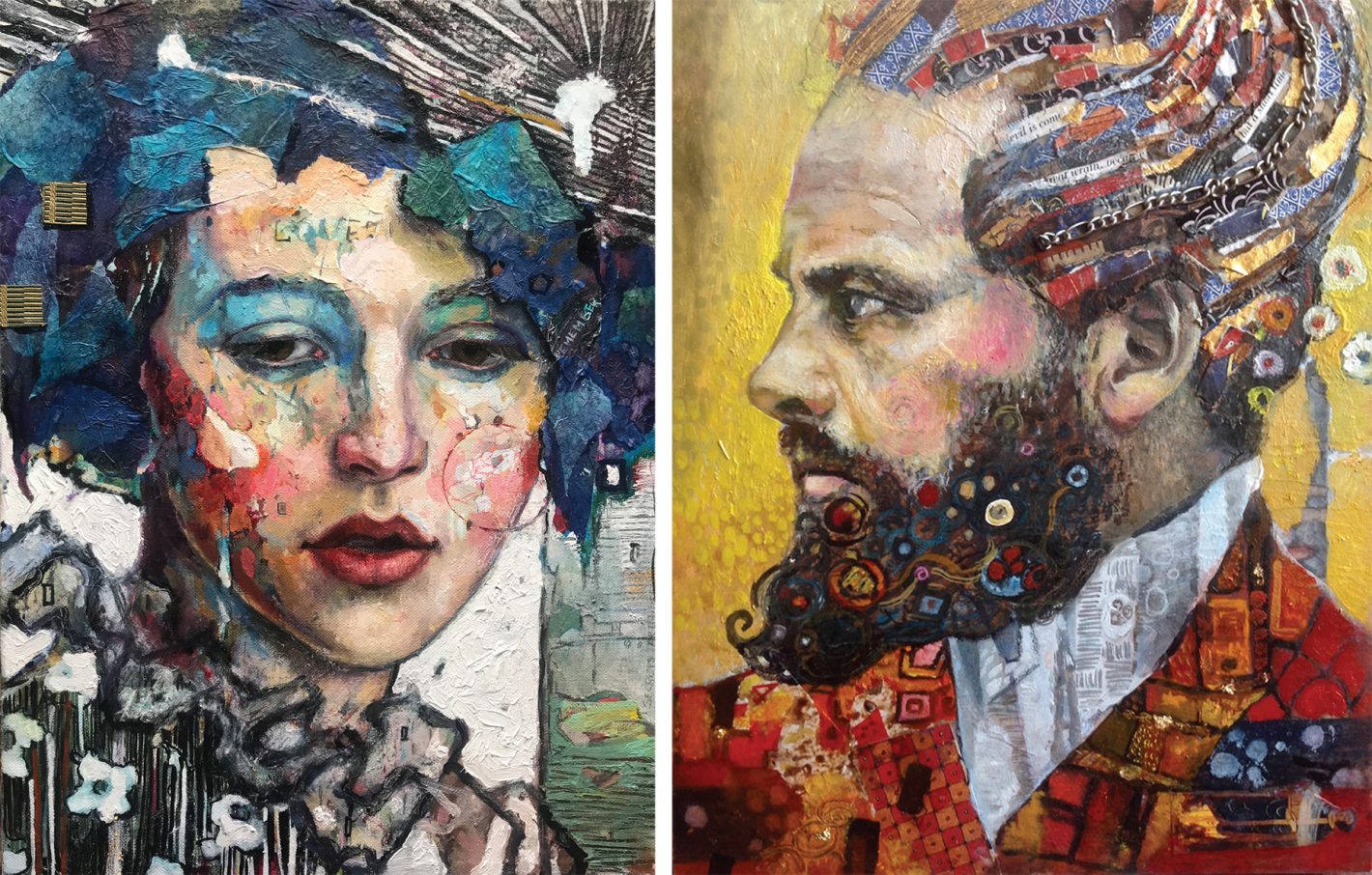 The human experience, in large part, has been nomadic in nature—well, that was the case about 10,000 years ago when most of the world’s population was comprised of hunter-gatherer tribes, like the Mongols in Asia and the Inuit in the Arctic, who sustained their respective populations by foraging for plants and wild game.

The itinerant nature of man doesn’t just manifest itself in the traditions of subsistence. For artist Juliette Belmonte, her work draws upon not only her own peripatetic experience—her Westfalia camper van served as a mobile studio for a spell as she and her husband cruised up and down the California coast when they first moved west from New York—as a foundation for inspiration, but in the materials she incorporates into the vivid, technicolor portraits she creates.

“I’m super nomadic,” Belmonte explains. “Unfortunately, even more so than I’d like to be. I just kind of grew up that way, and it’s still in me. My husband and I are still moving around constantly.”

Drawing from her nomadic upbringing and lifestyle, some of the most profound and eclectic elements in her artwork are the found objects that she incorporates into each portrait she paints.

“I pick up things around me all the time and that is super fun,” she continues. “That’s obviously a very technical way [that] I actually put physical things into my paintings from where I am.”

Though currently based in Sacramento, Belmonte is a Costa Rican-born American artist of Argentinian and French descent whose colorful portraits spring to life through embellishments and random flourishes she procures from the streets, sidewalks, trails and pathways she intersects with. Adorned with swirling shapes, flowers, scraps of fabric and even bits of torn money, her artwork draws not only from her South American heritage but from her experiences as an enthusiast of the wanderlust movement.

“I listen to a lot of Spanish music when I paint,” she explains. “I’m really moody when I paint, so whatever kind of mood I want to put into it tends to come from music.”

Belmonte’s inspiration for the work she produces is drawn from historical photographs, people she encounters in her daily life—like her current hairdresser who recently posed for “like a million photos”—as well as from a lively imagination that was forged in the confines of her mother’s art studio during her childhood.

“I take a lot of photos and I just accumulate garbage,” she said with a wink and a nod. “Sometimes it’s not always pleasant stuff, but I pick it up anyway—especially if it’s got a really interesting pattern or looks really old. My mom always did collages, so definitely that was her influence, and it was right around when we left New Hampshire—it must just have been one interesting thing I found and then it just sort of started building up on itself, and it’s the most fun part of my job.”

While the artist claims that she wasn’t very interested in school during her childhood, Belmonte’s nomadic sensibility and creative yearnings eventually led her to study at the Art Institute of Fort Lauderdale, the Art Institute of Chicago and the Art Students League of New York. And, thanks in part to online art marketplaces like Artfinder and Instagram, as well as a residency at the country home of a collector in Saint-Nicolas-du-Pélem, France, in 2017, her work has found homes in residences around the globe.

“I come from a family of seven kids,” Belmonte explains. “I was also incredibly, painfully shy. I gravitated towards art because that was the thing I was sort of decent at.

I wasn’t great at school or sports, so that was my thing and I could express myself in that way, and I could hide in my mom’s studio. I just was always in my mom’s studio by her side, [although] she didn’t necessarily encourage me to be an artist because she was afraid that I would starve—really, I just started being able to support myself.”

For the past 15 years, Belmonte has managed to make a living by doing art fairs and exhibiting in various art galleries stateside and abroad. She currently has several pieces on view at Elliott Fouts Gallery in Midtown Sacramento. Fortunately, the days of having to sling drinks at local watering holes on the side is a thing of the past, thanks to a recent surge in her creative output and a career change for her husband.

“Lately I have been working at a crazy pace,” she explains. “My husband decided to quit being a lawyer and go back to school for engineering, which I was really happy about because being married to a lawyer kind of sucks, so I had to step it up in a big way. I was like, ‘I have to produce a lot more and I have to be a lot smarter about what I do,’ and it created this incredible pace in me, like this energy in me and I literally can’t stop painting. I’ve become a complete and total workaholic, but I love it, too.”

While some may find working at such a frenetic pace overwhelming, Belmonte says it allows her to fully develop the pieces she’s working on.

From scouring historical photographs and images, to distilling various elements from family members, and even her own visage, Belmonte says she uses a mishmash of a million different references to create a mood that evokes a narrative that brings her subjects to life—even if the inspiration comes from a figure that is no longer among the living.

“If I find someone that I want to paint, then definitely I will hound that person,” she says. “But I’m a little shy to approach people, and I’m looking for a really specific thing. I take real people and put them in a historical context—that’s kind of my thing I’m doing now, it’s fun. I just love how dramatic and unapologetic they are. Sometimes I just take an exact face and paint that, if I find it moving in some way, you know, like if they look sad or you maybe can’t figure out what is going on. I just think it’s so beautiful, that, you know, obviously they’ve been dead a long, long time but that emotion I think is kind of still there and still approachable.” 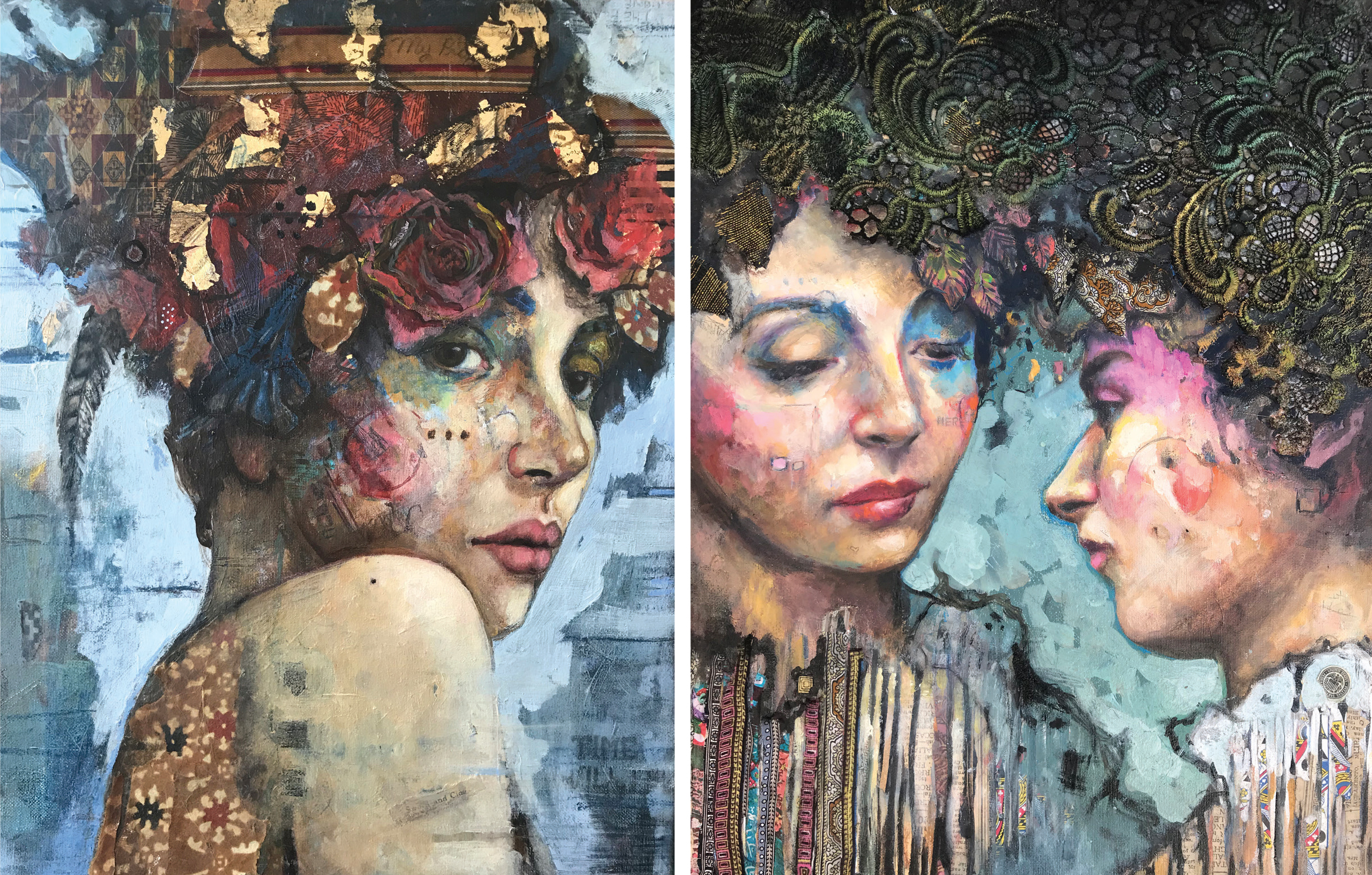 For Belmonte, her subjects’ stories are woven into the very canvases in which they live—from the delicate pieces of lace and other finery that are incorporated to the lively strokes of paint that adorns each portrait. To the artist, these adornments are little gifts that she bestows upon her subjects, as she says they are entities that deserve the love and care that one would provide a living, breathing person. In Belmonte’s work, there’s always a story that is incorporated into the final canvas.

While the artist is drawn to people and faces, she’s not especially impressed by what is “pretty” or classically beautiful. What inspires her are the underlying emotional stories that are conveyed by her subject’s expression or a posture—this, she says, allows the viewer to draw their own conclusions and to create their own stories of what is happening in the piece based on their own personal filter.

“The thing that is the most important to me is the expression that I’m trying to convey,” she explains. “So, I’ll spend an entire day on the eyes or something like that, just to make sure they’re saying the right thing; and I have to like them because I judge them instantly based on their face. And then I name them, like they’re real people.”

You can see Juliette Belmonte’s work on display at the Elliott Fouts Gallery (1831 P St., Sacramento). Gallery hours are Tuesday–Friday from 10 a.m. – 5 p.m., and 11 a.m. – 4 p.m. Saturday and Sunday. For more info, go to Efgallery.com, and learn more about Belmonte’s work on her own website, Juliettebelmonte.com.