Scott was showing with several other artists at the Toyroom Gallery back in 2002. I was wandering down K Street with a companion, and we had just started hanging out; you know, when you’re bored out of your mind and you know that the first date was a fluke because now you have nothing to talk about.

The small gallery space tucked into the back of a clothing boutique offered welcome respite from the rain that night. I also hoped it would provide something to talk about. It didn’t. But the art was amazing!

I didn’t know how to form an opinion on Scott’s work other than it appealed to me visually—bold color and subtle gradients, thick, ruby-red slabs of raw steak imposed over heads, all casually occupying comfortable, serene rooms or natural settings. The collision of gems, polished jewels and various cuts of bright red, raw meat create a textural feast, a visual orgasm. Very satisfying.

Scott has been showing and working as an artist in Sacramento, specifically the Del Paso Boulevard area for decades, as well as abroad. She saw the art boom of the ‘80s come to Sacramento, in galleries such as the Acme and Michael Himovitz. She even recently had a retrospective show of her work at the 1616 Gallery.

I turned onto the street to Scott’s home studio, deciding to park behind the vehicle I thought, on first sight, looked the most like it belonged to an artist. Looking at my phone for the address, I found I was right out front.

Scott and her husband, owner of the Toyroom Gallery, live and work within a small artist community called Surreal Estates. Building a vacant lot from the ground up with a group of like-minded artists, Surreal Estates is a functional artist community with 11 single-family units. The live/work space garnered interest nationally from other artists looking to own and work on a property while investing some serious sweat equity.

Scott has a show this month at Little Relics. The new body of work is recognizable as her work, and should not be missed. Decadent colors tell the story of a near future where bird watchers no longer have birds to watch. 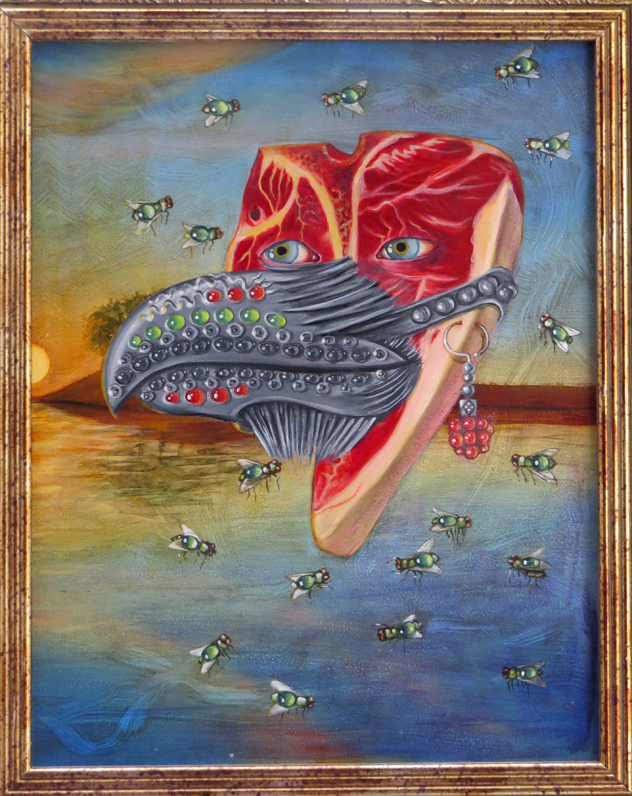 {Imitation of Life, Oil on panel, What Do the Bird Watchers Watch When There Are No More Birds?}

So what was your sort of pathway to art or illustration?
My mother was an artist when I was growing up, so I did get a lot of encouragement from her. She would take me to art openings around town and with her to art classes at American River College. Perhaps that wouldn’t be enough in itself, but I already enjoyed drawing and fanciful stuff, sci-fi, comics. I liked dressing up and fantasy life role playing when I was a kid.

I liked to doodle, so I wouldn’t say those drawings were completed thoughts. I did a lot of drawing as a child, but many of them just weren’t finished pieces.

When I was in high school I had a teacher who was a serious artist, and he really put me through the ringer in terms of the creative process. I suppose he introduced me to the formality more, and then in community college for sure I had teachers like that. I’d really made art my whole life, I was considered the class artist in grade school, but when I got into college, I still didn’t realize that you could be an artist as a career, it was just like, something I did. When I was there I was taking like marine biology classes, and at some point there I thought, man I could be a half-assed marine biologist, or be a pretty good artist, because my interests were really in art. So that sort of cemented my direction a little bit, in finding out about becoming the person I wanted to become from that point. 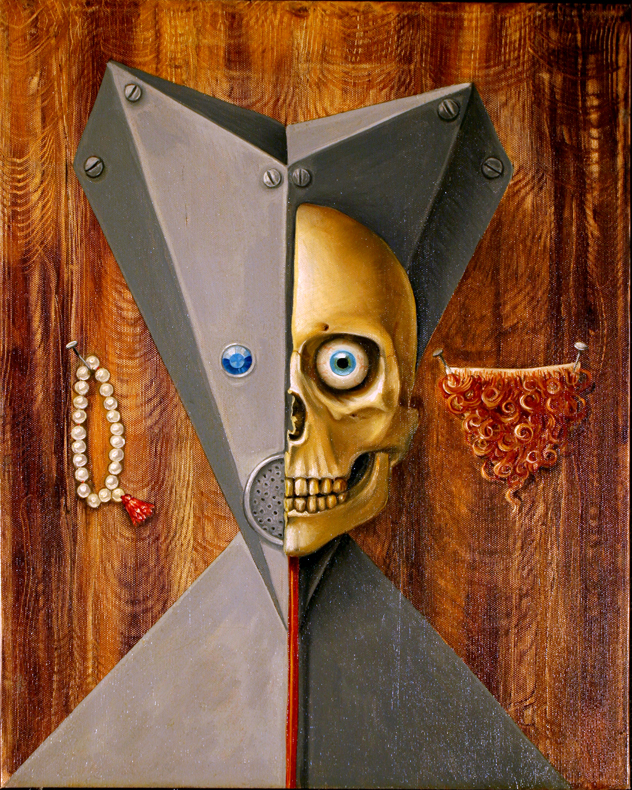 {Buffoon (The Masquarade), Oil on canvas, From the Crocker Art Museum Collection}

Who kinda made you want to start doing the style or mode of art you do now?
Something I use to this day, I use myself as a gauge, so like when I see someone’s work, or eat something, or I hear music, or I see colors, or architecture. I just get some kind of feeling, and I think “Oh, I’d like give someone that kind of feeling from my work.”

When I was in college, one of my first exercises from my oil painting instructor was a self-portrait. I mean everyone does that, but I just kept doing it and doing it. After that assignment I just kept going into it and into it. They look somewhat like me, but they don’t have to look like me to tell that story.

I had one art history teacher who told me a story about a guy who goes to this cocktail party, and he stands in the corner for five minutes and nobody notices him, and then he’s there for an hour and people start saying “What’s that guy standing in the corner for?” and then a day goes by and the neighbors know about it, and then he’s there for a month, and he gets in the newspapers. The story there is … if you stick at something long enough, it creates its own momentum, and I knew I had more than just standing in the corner at my disposal, but I took that on, so I think the self portrait thing, pragmatically, the only thing I know about is where I’m coming from … anyway, so is it narcissistic? Maybe, but I feel like, with full impunity, I can talk about all the shit that goes on in my own mind, the crazy stuff, or the beautiful stuff, and maybe get that right, and not impose on anybody else. So I’ve done that a long time, standing in the corner working on that, and I’ve sort of gone all over the place.

Also, I took up bird watching a few years ago so I’m out in nature a lot, taking photographs of birds, and I was already doing paintings of birds, but I had to rely on someone else’s imagery, so they were always more made up than photographic.

The two things I focus on the most are vanity and impermanence. What is the vanity of what you are doing? What is the impermanence? So with that in mind, maybe it opens things up in the work.

What I’m expressing in my work about vanity is more about the human condition, about how it’s a crutch, and there’s a lot of suffering that comes from that. And it’s also funny too, it’s like clownish or foolish to hold on to things like that, but it’s human, a foible, or weakness, or a misunderstanding of how things are. 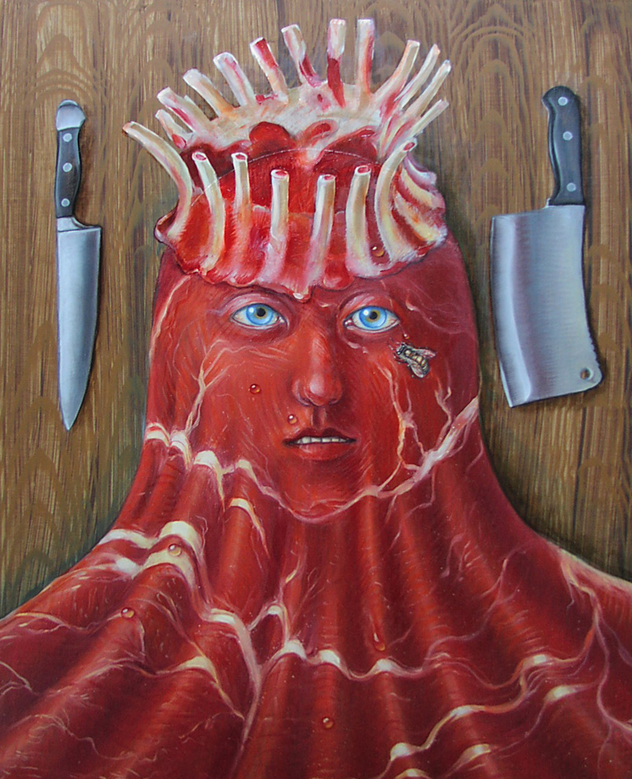 When did you feel the most a part of an artist community in Sacramento?
Probably the first strong community I felt a part of was the Acme Gallery group, and it was predominately started by David Stone, who now owns a gallery down in L.A. He was a Dadaist, but now he’s more into conceptual art. I used to do performance art as well as painting and sculptures. There were a lot of interesting artists in that group. After that, the Michael Himovitz gallery, which isn’t around anymore, but is now the 1616 Gallery.

During the mid- and late ‘80s there was a lot of money to be made in art; that was like Fast Times in Sacramento.

Was that a time when there was a more active creative class?
There was a very active creative class then. There were a lot of people who collected Sacramento artists during that period. Michael Himovitz helped during that period. He really brought about sort of a renaissance in Sacramento, and people still talk about what he brought to the arts community then. He was a guy that liked art, didn’t know a lot about it, but he was an innovative guy, and he wanted every artist in Sacramento to bring him their work. So he took it from everyone who would bring it, he formed for himself an opinion about what he wanted to show. He believed in it, and he found people that trusted him, and people bought it. 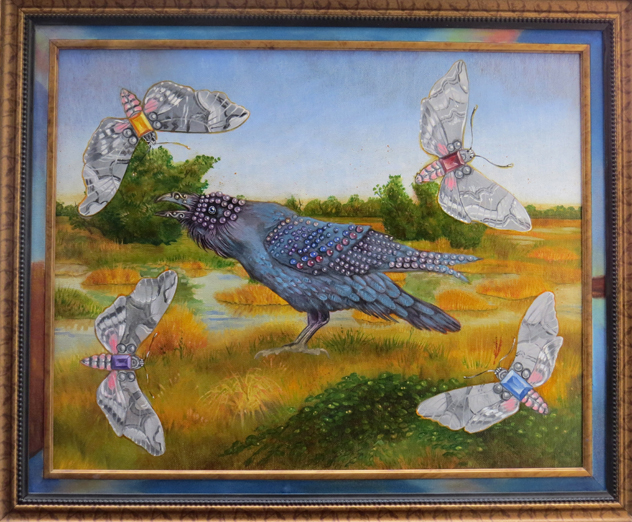 {New Breeds, Oil on canvas, What Do the Bird Watchers Watch When There Are No More Birds?}

What would you say is motivating your upcoming show? What has changed in your focus?
Well, I think bird watching, but not just seeing birds, but observing nature, and the delicate balance and reading the newspapers about extinction and global warming, that’s a big part of it.

This body of work is really experimental … and it relates to the last work I did. My private working title for this show, which is sort of a reminder, is What Would the Bird Watcher Watch When There are No More Birds. So when I really started seeing that, and started internalizing it all, the beauty of nature and where things are going. 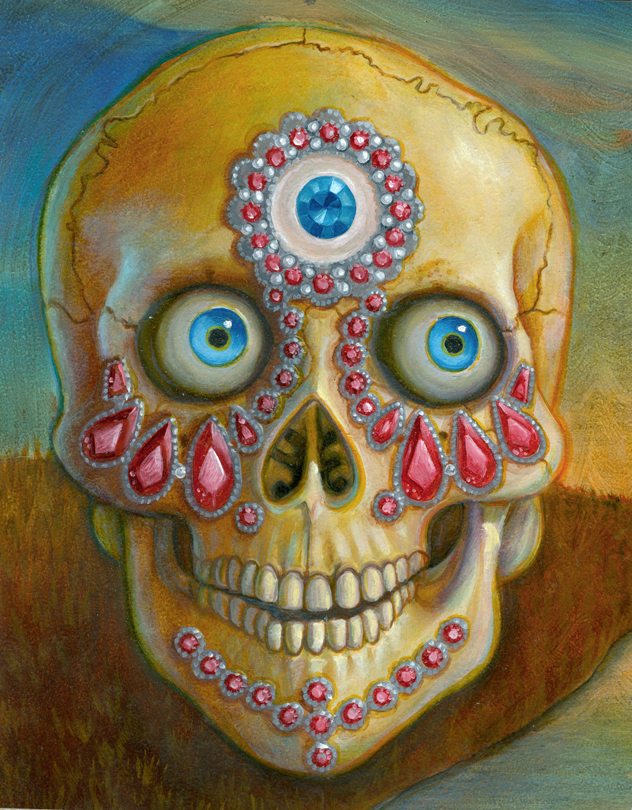 {Cry Baby, Oil on canvas, What Do the Bird Watchers Watch When There Are No More Birds?}