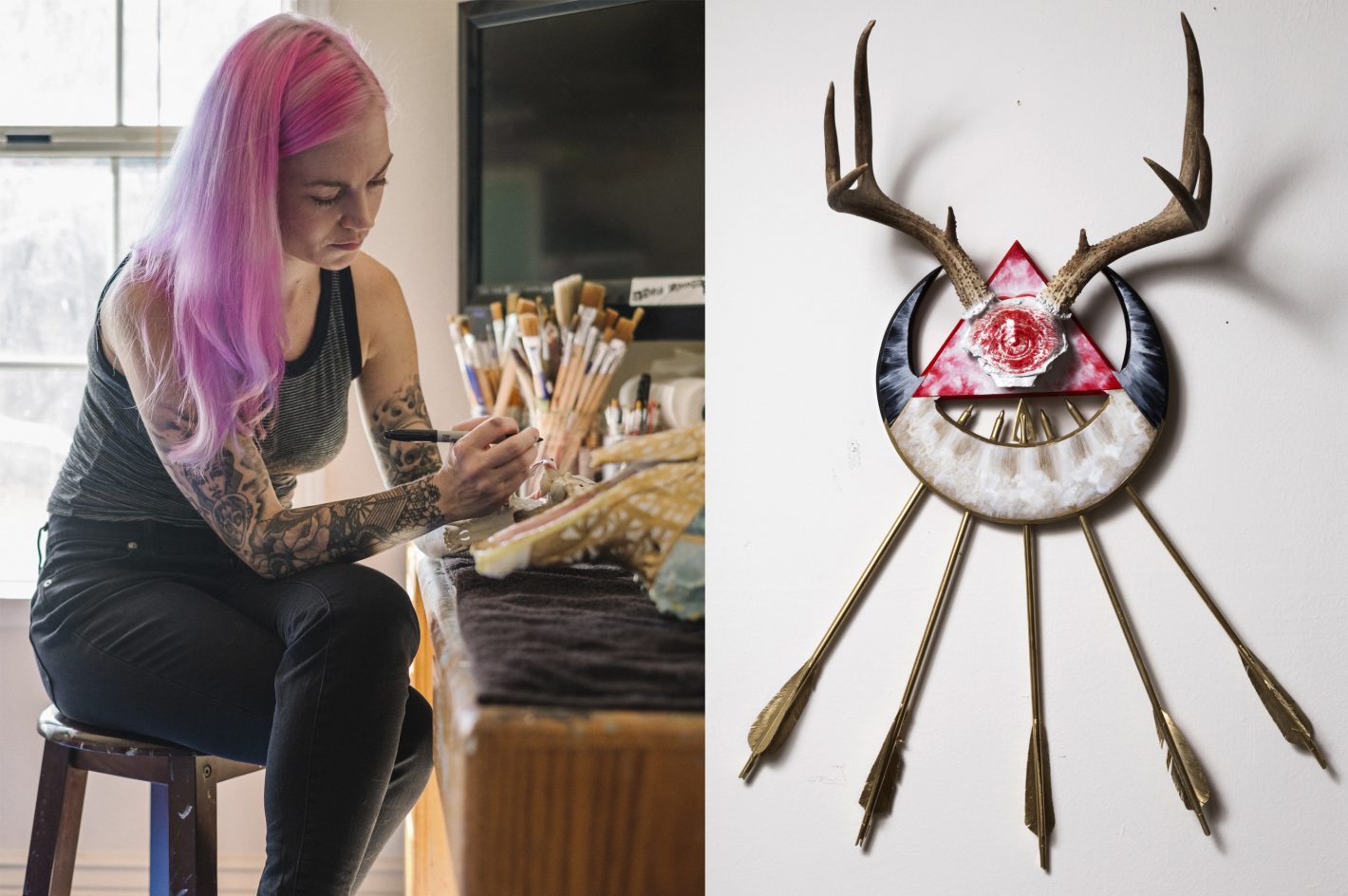 “I used to think it was so boring and what old people listened to when they don’t listen to punk anymore!” she says. Fast-forward years later, and suddenly Napier is a goth/post-punk music embracer. She loves how beautifully melancholy the music is, as well as the atmosphere it provides. Like her music tastes, Napier is constantly learning to embrace the natural cycles that make up who she is, and who she is becoming.

Through October, Napier will be displaying a collection of her newest pieces at the WAL Public Market (1104 R St.), titled Ritual Acts of Devotion. The show will be her very first solo exhibition in Sacramento. The work is an ode to the natural world, and coming to terms with the beauty of the entirety of life cycles, as well as the conclusion of them.

For months, Napier would settle into her home studio in West Sacramento and turn on some Chopin and other classical favorites—music that is void of words and “isn’t too intrusive on the thought process,” she says. Her work often comes from a sketch and is well planned, but Napier says once she sat down to create, “Time would disappear and I would become completely engrossed.”

She found herself building personal relationships with the animal skulls and wood that were to become part of her sculptures, and she can pinpoint a special story or moment with each and every piece. Parting with them will likely be bittersweet for Napier. 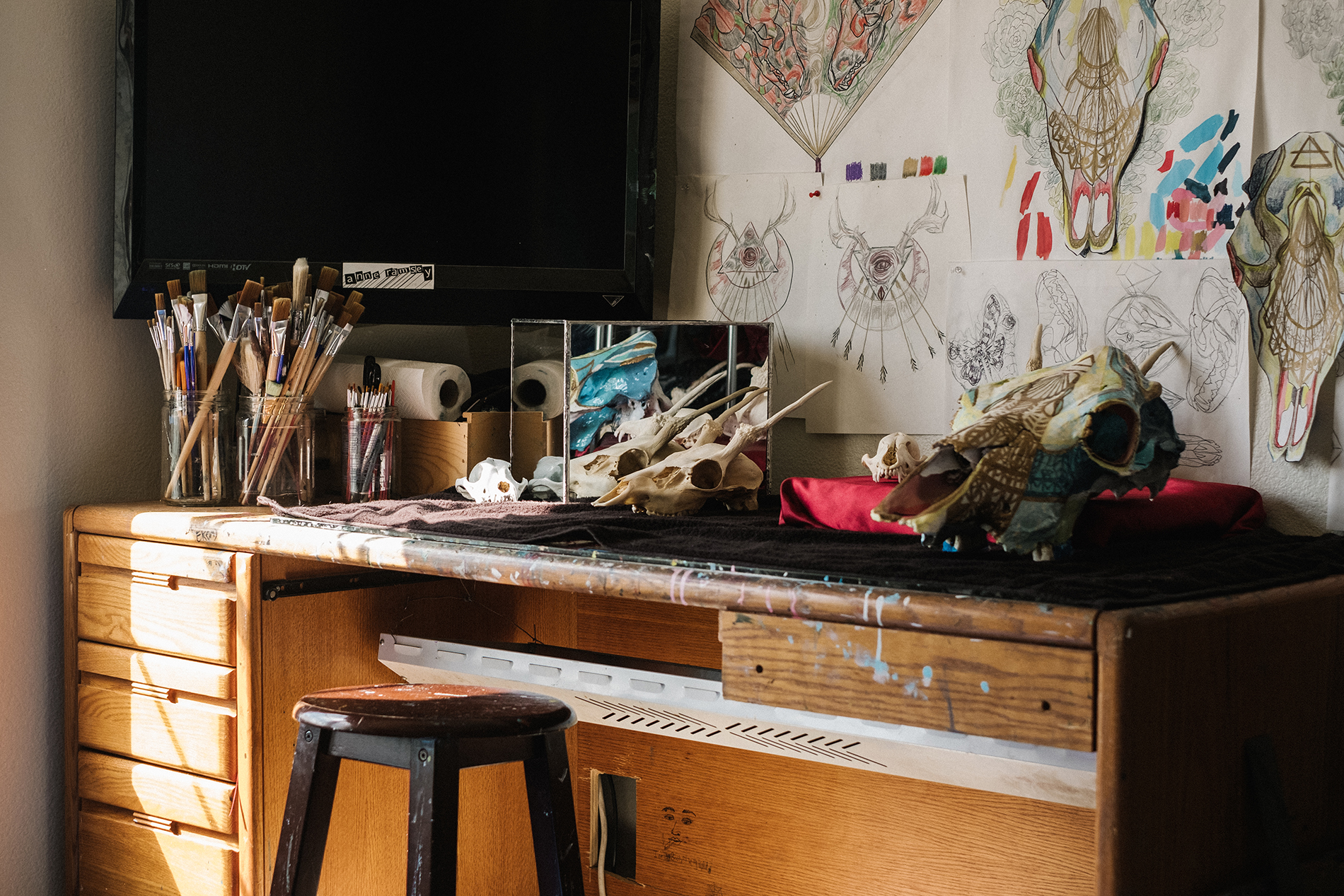 “The underlying theme with Ritual Acts of Devotion is reverence for the natural world, specifically looking at sides of things that aren’t traditionally as beautiful like decay, entropy and death by really looking at them and celebrating them instead of shying away from them,” explains Napier. “In that process, it kind of became like making an altar, or making a zen garden … or more accurately, a bone garden. It ended up really being like a meditation. It unknowingly became spiritual.”

Ritual Acts of Devotion signifies a completely new phase for Napier. She created the pieces, but gets really deep into the “why” of the pieces and what they truly mean to her.

“I always want to go back to nature and become less connected to the physical world. Facing my own mortality and embracing it instead of distracting myself with modern things,” says Napier. “We are all dying, and life is short and we shouldn’t be afraid of that of that. Carpe diem, man.” 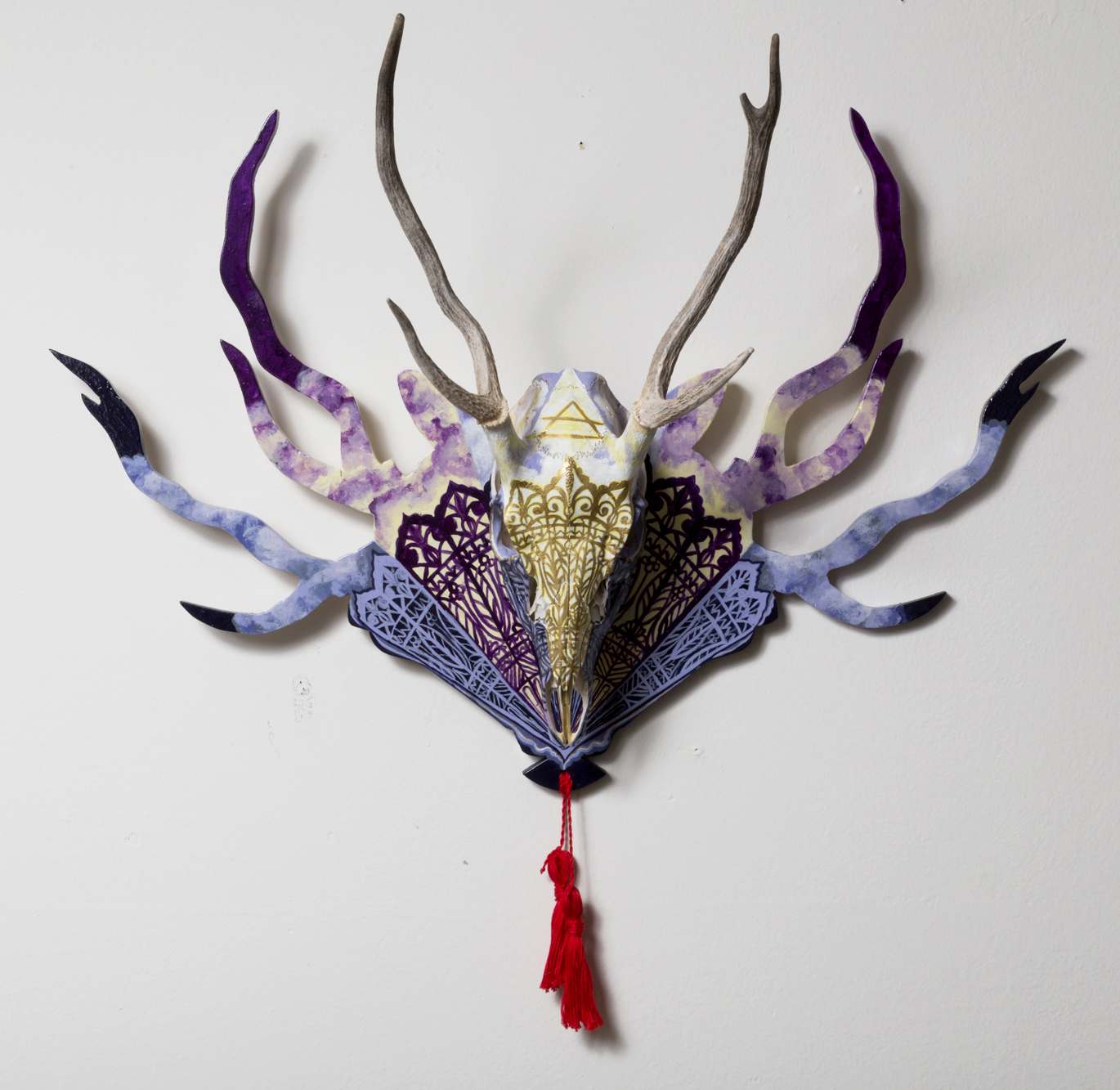 The pieces for the show include 3-D mirror works that create an infinite image that reflects the piece and sometimes the viewer. It is a reflection of duality, and how we all have two different sides to us.

“Everything in nature has its opposing force, so that’s what this is about,” says Napier.

The skulls Napier used are all gifts from acquaintances, sourced from either natural deaths or road kill. Napier says lots of people give her skulls that they just happen to have lying around the house for years.

At first, figuring out how to handle the materials was a struggle for Napier. Her partner, Frankie, is a carpenter and made the actual construction component much easier. 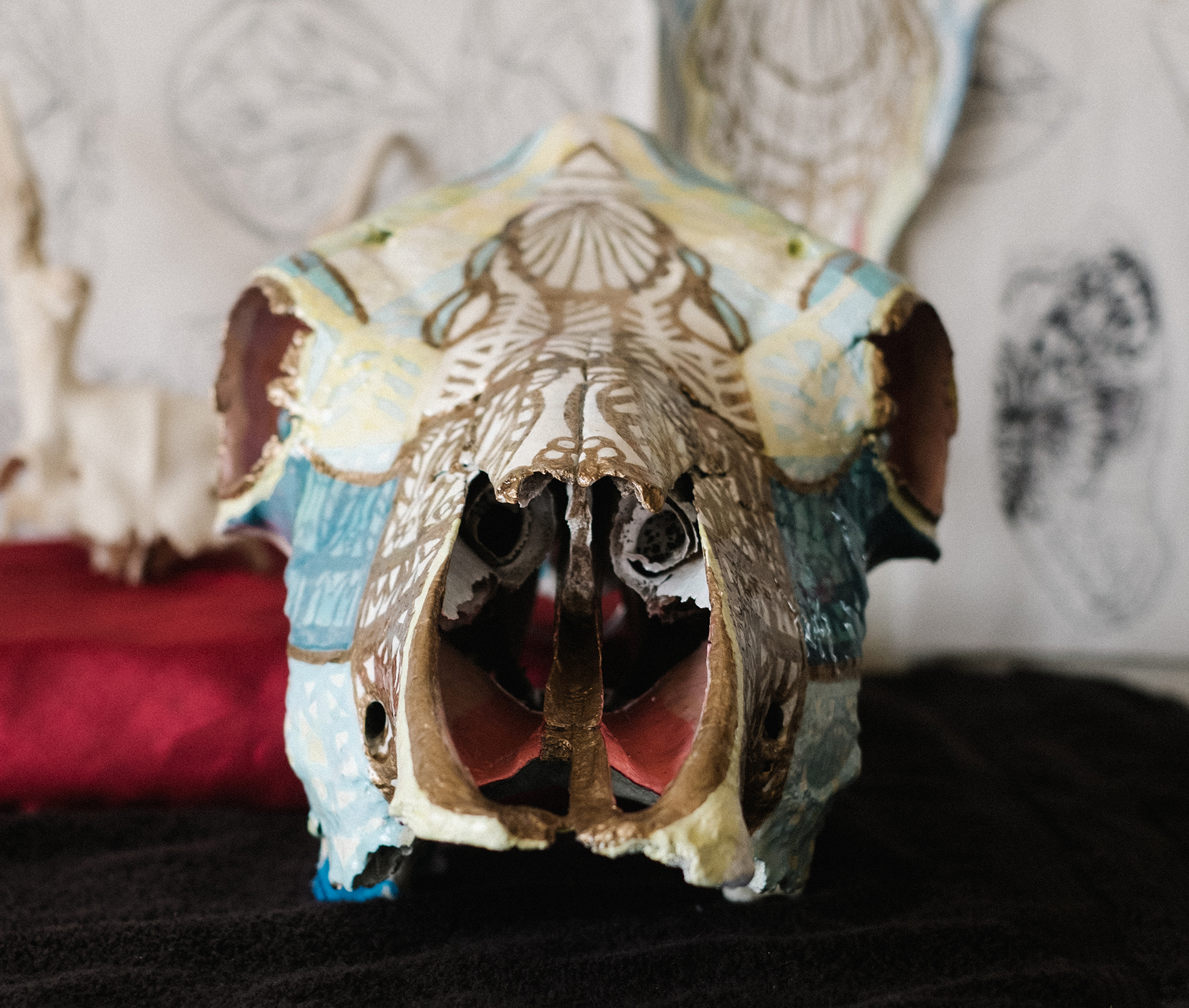 “When you get confident with the actual assembly of stuff, that’s when you can make your dreams come true,” says Napier. “Now I feel like I can make things better. I constantly evolved through this and set meaning.” Her pieces are a reflection of her now confident craftsmanship paired with a respect for the material.

Ritual Acts of Devotion opens Oct. 6 with tarot readings, which won’t be your wine-and-cheese type art gathering, as the show will conclude on Halloween night with a party featuring a goth DJ. The show in its entirety is meant to be an immersive experience that ends with a big party that’s open to everyone. Napier says that the WAL curates the perfect environment because they “make it so that art is for everyone; it is so open and visible. They make it so we can celebrate art with everyone whenever they want to.”

The show will also include resin-covered plaques and prints for sale at a range of prices, Napier wants everyone to be able to have a piece of art if they want it. 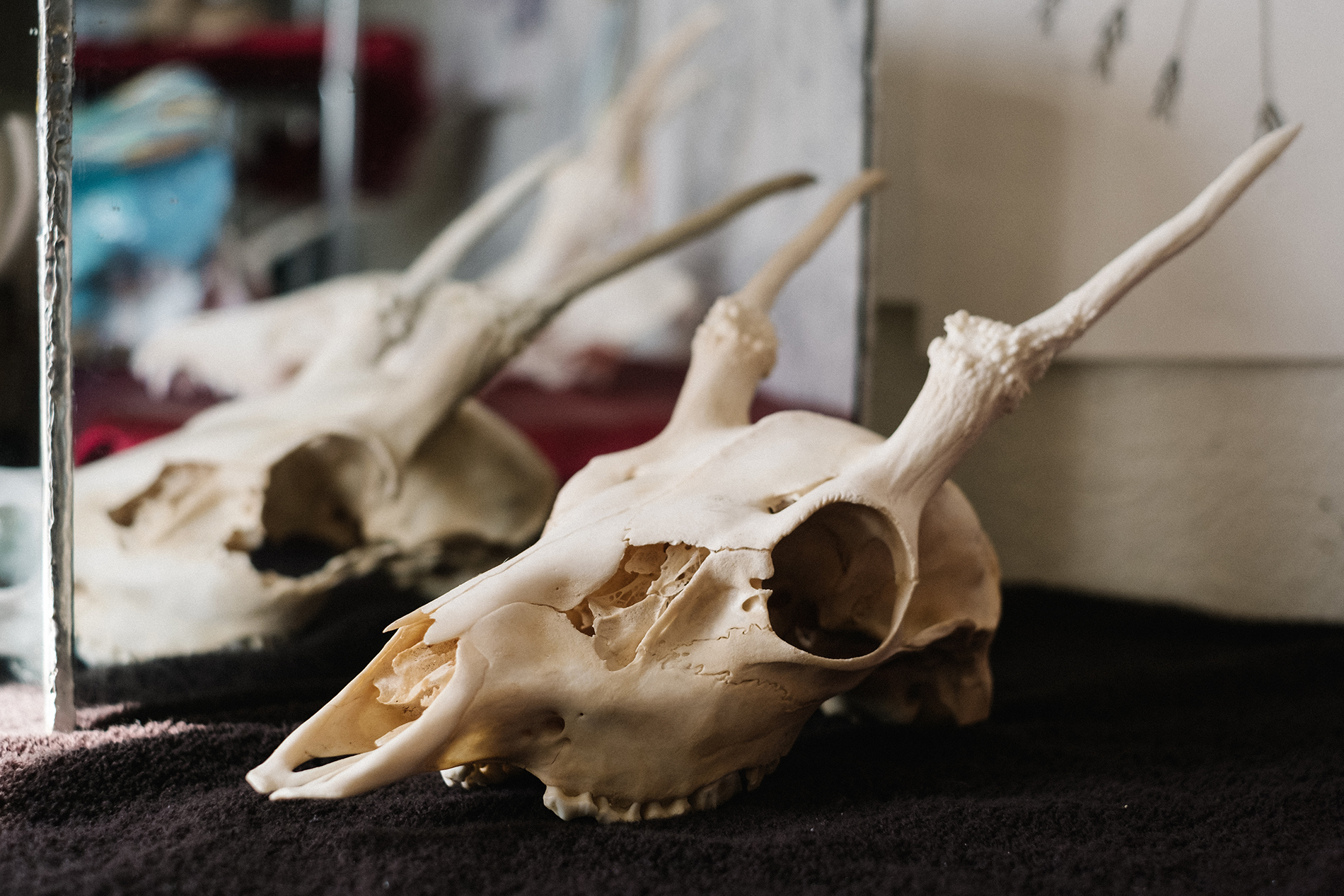 “I want young people especially to be able to afford art,” says Napier. “Usually they can’t collect it because it isn’t really financially reasonable for them, so I decided this would be a great thing to offer.”

Ritual Acts of Devotion is a show grounded in the spiritual cycle of the material, and seeks to help the viewer find their own spiritual attachments to the subject matter. We can see the “what was” and “what is” in the bones of animals, and in the reflection of ourselves, and eventually consider “what is inevitably to be.” It is a reverence for the natural world and all its processes and cycles, including seeing death as just another natural part in this beautiful cycle. As Napier says, what is simply “as beautiful as a sunset or sunrise.” 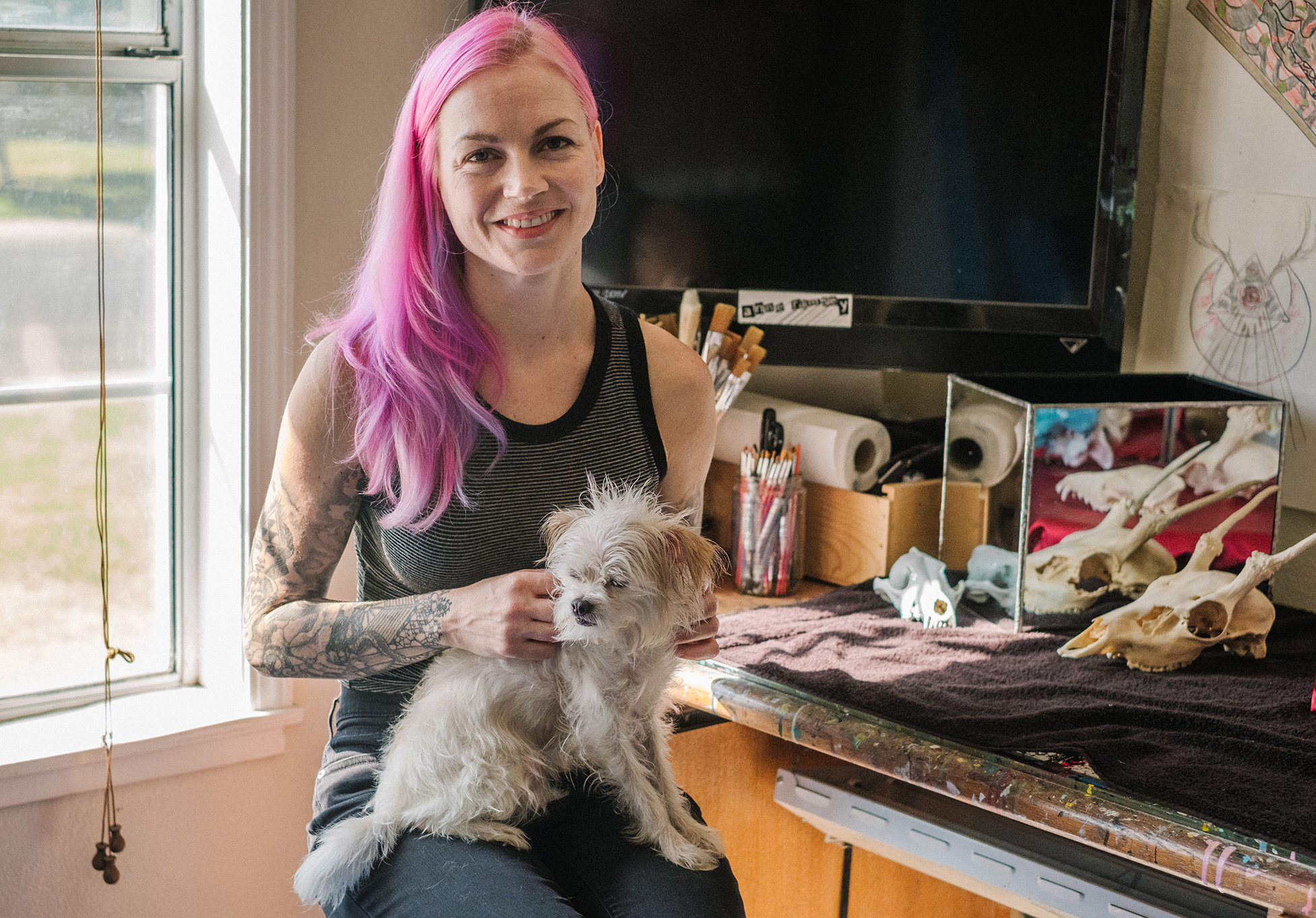 The opening reception of Kristen Napier’s Ritual Acts of Devotion will take place on Oct. 6 at 6 p.m. at the WAL Public Market (1104 R St., Sacramento). The event is free to attend, and will feature live tarot card readings by Amy Joy Eoff ($10 suggested donation). There will also be a closing party on Halloween night starting at 6 p.m. featuring prints for sale and DJ ValleyGhoul spinning post punk and goth records. For more info, follow Napier on Instagram @agent_of_entropy or go to Facebook.com/walpublicmarket.