Sacramento has always wanted to be a primary market, but as far as attendance at art and music gatherings go, has been a tertiary market at best. In the last decade, however, artists like painter/sculptor/illustrator Laurelin Gilmore have managed to eke out a living doing what they love most: working full-time on art. Not only is Gilmore an artist on the rise, she has won several awards and the approval of many fans and venues alike.

On any given day during the traditional Monday-through-Friday work week, you can find Gilmore holding court at Verge Center For The Arts (625 S Street, Sacramento), working on her craft. Because her rent is manageable, she is able to have a space away from her home in North Sacramento, where she currently resides with her husband and 8-year-old daughter who she says is “a better artist than I was at her age.”

“Being an artist is not a self-sufficient entity and my husband does need to work,” Gilmore recently said in a telephone interview. “However, it is my full-time job and I spend about five hours a day in the studio and have 24-hour access to come and go as I please. It’s great to have somewhere to go and create if I feel the desire late at night. On weekends, I usually spend my time with my family unless I have a show somewhere.”

For the uninitiated, Gilmore’s work is highly colorful, whether she’s doing drawings, paintings or three-dimensional sculptures. 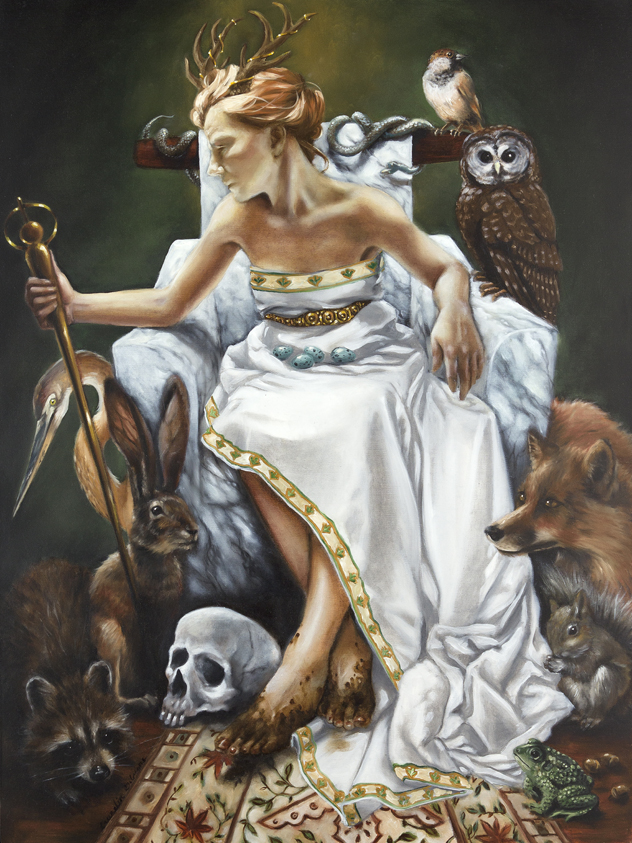 {The Queen Having Made Her Choice}

“I have been drawing as long as I could hold a crayon,” she says. “It’s really hard to quantify how many drawings or handmade pieces I’ve made over the years, but drawing was my first love. Up until 1998, I was strictly a pencil, graphite, chalk and charcoal artist.”

Gilmore says it was “just kind of a natural extension from hand drawings to expand and add texture and form” when she began painting.

“I’m still an advocate of drawing in its primitive and primary form, however.”

However, there is one medium that Gilmore doesn’t excel in. “I don’t do very well with colored pencil,” Lauren admits. “Using a colored pencil creates too fine of a line. If you cover a large area with colored pencil, you lose immediacy in the piece and it takes much more time. Rather than drawing a sky with colored pencils as a medium which can take hours, painting is far more expressive and, similarly, more colorful to view.” 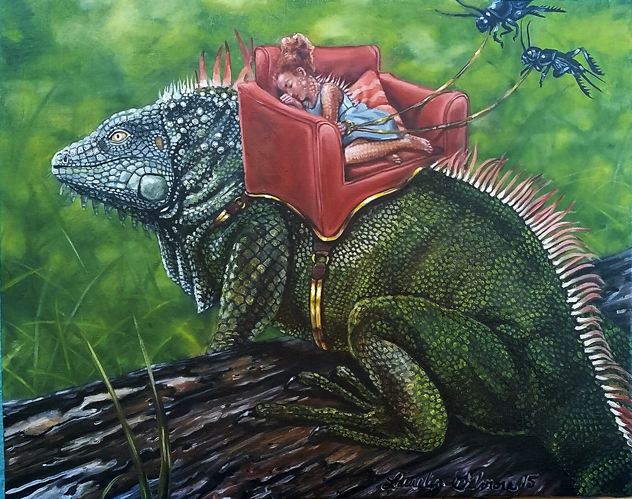 In her artist’s statement, Gilmore says her subject matter “can be somewhat varied, but the human figure has always been my touchstone. My goal is to record on the paper or canvas as well I can the beauty of everyday through realism, surrealism and fantasy. My art looks at the place where separates meet, and explores through fantasy the experience of the would-be fence sitters as go-betweens, translators, and bridges between perspectives.”

Gilmore admits the collection she’s preparing for her show in September is one she’s “most excited about and terrified of creating.

“This is the most personal art I’ve ever made,” she says. “I am painting my experience as a person living with vitiligo…a skin condition that turns patches of skin white. I am using as models a couple of people who also have the condition and using myself as well to explore it as something beautiful and strange and strangely beautiful, I guess. Reactions span the spectrum, so I look forward to engaging viewers in a discussion on the topic that is motivated by seeing me and mine in a different light.”

Gilmore’s 20-plus-year tenure in the Sacramento Valley has garnered her fans, accolades and an appreciation for the Sacramento art community. She earned degrees in Fine Arts and Library Sciences from Sacramento City College and soon put down roots. 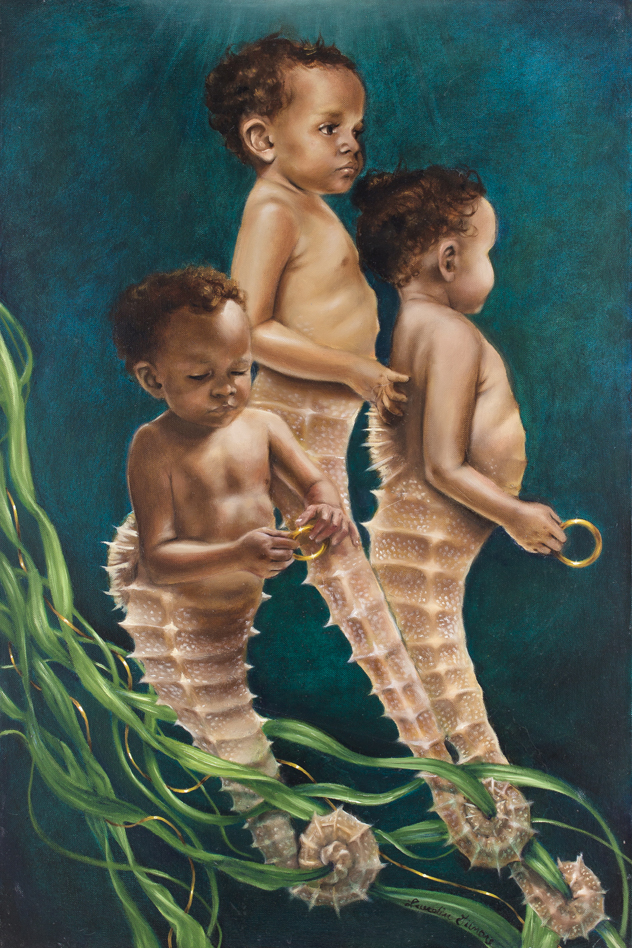 Her tenure in that community begins with her very first sold drawing at a Sacramento City College art show (for which she still holds the $20 check “for posterity”), and continues with a stint at Gallery 2110 inside the Sacramento Art Complex, as well as entries in prominent shows. From 2012 to 2014, Gilmore had a studio space at Gallery 2110, where she earned commissions from several walk-ins. Though she loved the exposure, the downside was the 2nd Saturday traffic being able to see “things that were still in their creative womb,” she says. “I would often have a couple of easels up and people [would] see pieces in their infancy.”

Gilmore’s Self Portrait with Olivia drawing, of herself holding her infant daughter, was accepted to the 2007 California State Fair and sold. In 2013, Gilmore’s Coiled painting won Best in Show at the Sacramento Fine Art Center 2013 Animal House exhibit. “This is no small thing since there were some incredibly talented artists showing there,” she says.

Gilmore is looking to geographically spread her wings, and is on the hunt for more shows. But she’s calculatingly realistic about the prospects. “Last year I told myself I wanted to show in Los Angeles and New York and I did manage to get the former done,” she says. “I also want to do New Orleans and New Mexico. Basically, I’ve been looking for shows that I can drive to since you usually have to pay a fee to be curated, the gallery takes a percentage of any sales made, and it costs a lot to ship to out-of-town galleries. I decided I would only do shows that I could drive to unless there was something amazing like an international offer or something major that I couldn’t pass up.” 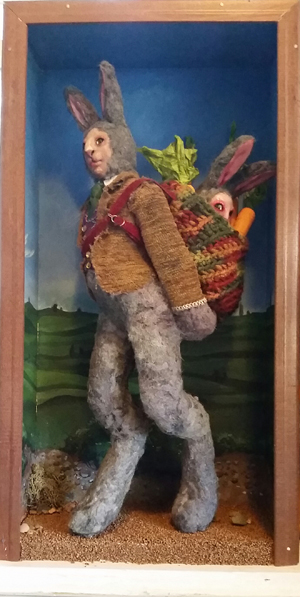 Making a living is a struggle when you’re a local artist, and for the most part, you either sell at one of your residencies or through constant word of mouth in the artist community. Gilmore, however, is optimistic about using cyberspace to boost her sales and maintain a semi-steady flow of income. She plans to open an online store connected to her website (Laurelingilmore.com) and branch out to other social media sites including Twitter.

“I’m not as active on the internet as I should be and stopped blogging a while back,” she says. “And while I do believe in artists telling their own experience, I just never really kept it up. Social media from my Facebook page has been a great way to get the word out, however, about shows and pieces I’ve done.”

For those who chose the uncertain path of being a full-time artist, it always helps to have a support system whether family, friends, or colleagues in her field. When pressed whether family has encouraged and acknowledged her chosen path as a legitimate one, Gilmore was quick to reply.

“It’s one of the questions many people ask me,” she says. “The fact remains that nobody ever told me to stop. My mother, husband, brother and two older sisters were always supportive of my endeavors and never questioned me. Additionally, I am still very close with the former owners of Gallery 2110 and they are great allies to have.”

Of course, no monetary value can take the place of human interaction and experiences. And while Gilmore has not become a millionaire overnight, it is her love for the art that has made a difference.

“Personally, I think my greatest triumphs have come from interacting with art lovers,” she says. “At the Sacramento Art Complex, I was so privileged to be able to meet and converse with so many people who had personal experiences relating to my art. There was a little boy who used to come in every single month with his mom and ask me questions about new work, old work, whatever. I really looked forward to seeing the two of them. 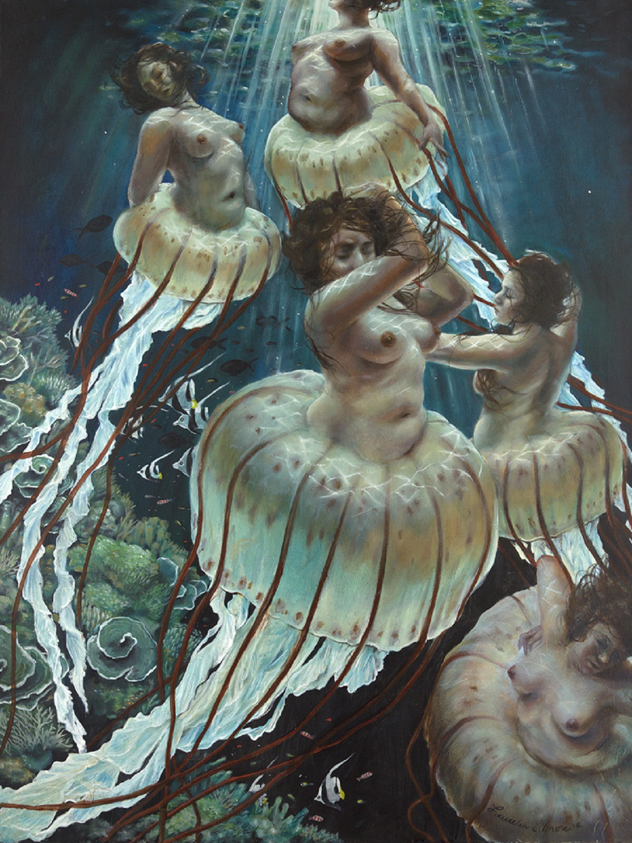 “One woman told me that my painting, Jelly Ballet, has been used to inspire conversations about body image and body gratitude in her circle of friends. People told me they could see themselves, their loved ones in my work. I absolutely love hearing the stories people come up with around these creatures I’ve made. It means they inspire a thought process that goes in weird creative directions for people, and what else could I ask for?”