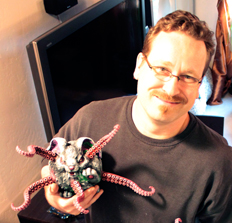 During our interview, artist Lee “Leecifer” Gajda brings up what he says is an old adage regarding art. “You can buy it or make it,” he said. “But you can’t do both.” The adage held true for Gajda, and in a roundabout way it is what propelled him down the path toward vinyl toy customization, which is what has made him a force in the underground art world.

When we spoke to Gajda, he was at his home in Oakland, packing up his artwork (about 22 toys and 18 paintings in total by his count) for his current show at Contemporary Conflagrations, which is running now through July 19, 2011 at Dragatomi in Sacramento. The artist was chatty and instantly friendly over the phone. It was the sort of jubilant personality you’d expect from someone who spends his life doing what he loves. However, the life of an artist wasn’t always what Gajda thought he wanted, opting instead for a 401(k) and early retirement, he said. He spent years working as an art director for a phone company, but when a corporate merger would have forced him to move to Texas to keep his job, he bowed out of the corporate world.

“They had a job for me, but they had moved all the artistic services to Dallas or somewhere in Texas,” Gajda said. “I love the West Coast, man. Screw that.”

Gajda said he got on the vinyl toy “bandwagon” pretty early on, about eight or 10 years ago. It was even before Kidrobot, a store that is sort of a touchstone for the vinyl toy culture, opened its doors in San Francisco. Prior to venturing into toys, Gajda did some work as a gig poster artist for The Pine, a venue in Livermore, Calif. Through his gig poster work, he was fortunate enough to meet Frank Kozik. At Kozik’s home, Gajda got turned on to vinyl toys.

“I went to his house, and he had what would have at that point in time been considered the roots of the vinyl movement,” he explained. “He had a lot of Bounty Hunter and stuff from Japan. The first pieces I actually customized were pretty pricey stuff, which is actually funny because I wish now that I had a lot of that stuff back. You reach for the first thing you can in terms of painting, so I had picked up some really nice pieces over the Internet and proceeded to paint them. I sold them, and at the time it seemed like a good idea, but once you become a collector, you’re like, ‘Damn it! I wish I had that piece back.’”

It wasn’t just his encounter with Kozik that inspired Gajda to start customizing toys, but also his and his wife Michelle’s love for collecting art by Sam Flores, Jeremy Fish and others in the Bay Area underground art scene. However, when Gajda lost his job, it wasn’t economically feasible for the couple to drop over two-grand on paintings any more. They could, however, buy toys based on the works of these and other likeminded artists. It was this idea that anything could be a canvas that inspired Gajda to try his hand in painting toys.

“I thought, even before the first proliferation of heavy toy shows, these guys, their attitude is that they’ll paint anything,” he said. “They’ll go throw down on a big burner piece on a wall somewhere, or they’ll sculpt something, or they’ll have their own vinyl toy produced. No disrespect to them, but I saw it as a canvas.”

Gajda said part of the thrill was being a part of a scene that was just getting started.

“You could feel it growing locally,” Gajda enthused. “That’s why I have such an affinity with the toy thing. I got to see it start. How often do you get to be a part of a scene that gestates in front of you?”

The artist admitted that he’s not sure about the future of the vinyl toy movement. He questioned its longevity and also expressed concern over the carbon footprint of working with vinyl (i.e. that it’s shipped from overseas in most cases and how the waste materials from its production process are handled). For the time being, he’s happy where he’s at. He even has his own toy, a creature called Honoo the Flame, that has been produced by Super7. Gajda discusses his new show at Dragatomi and other developments in the following interview. 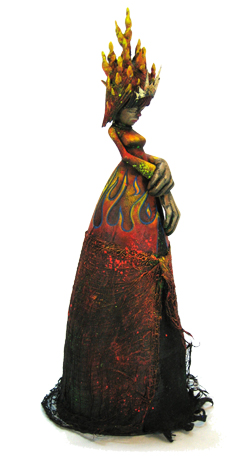 Has the carbon footprint aspect of the vinyl toys pushed you more toward conventional painting?
My focus…my future is going to be producing art. I don’t want to go back to a corporate job. My skill set now could easily be replicated by a kid coming out of college who’s going to work twice as hard, be less bitchy, have all the current applications under his belt and be willing to work for half the price of what I would want. So I’m kind of screwed as far as getting a corporate job goes. At this point too, I’m covered in tattoos. I like my cocktails. I’m not the corporate material I might have been once upon a time. I really enjoy making art, and I’m happy that people are buying the paintings. I’ll continue to do toys as long as they’re around, and hopefully that will be a long time. The show I’m doing at Dragatomi, I think, has a nice blend of both…

The show you’re having at Dragtomi is called Contemporary Conflagrations and its logo is an image of the Honoo character. Is that the centerpiece of the exhibit?
Oh yeah. The show is based around the release. When you finally get your own toy, you want to share it with your friends. I’ve gotten to work with the Dragatomi folks for some time now, and I immediately thought it would be really cool to have a show and a release at their toy store. I’ve done a few group shows since the release of the figure, and in some cases, I put flames on all the toys. In this case, I didn’t do it as much. I was looking for a specific image or feeling for each toy. I didn’t just liberally apply the flame motif to everything.

There are a bunch of little paintings that are shots of the Honoo. The bigger images don’t have the Honoo at all, and the toys, I did a half-dozen Honoos, but it’s a pretty nice mix. I didn’t want people to walk in–specifically the kids–and see all these horrifying toys on fire. It’s an all-ages show. There’s no nudity, no flaming penises.

No flaming penises? Not even one?
I’ve been known to toss a penis in periodically or a good female genitalia, but no, there are no genitalia in this show, and even if there was, none of it would be on fire. I think we have a nice mesh of art for folks to check out.

Were the Honoo something you created or something taken from folklore?
To my knowledge, it’s something that I created. I might have borrowed liberally from folklore, but off the top of my head, it was unconscious if I did so. I gave it a background story so it would mesh with the rest of the Monster Family toys. Super7 had been making their own product for quite some time, and Brian Flynn is just an amazing designer, just a master of his craft. They’ve made some incredibly wonderful toys. They were working with a lot of the people in the vinyl toy scene who’d already had toys. With the Monster Family line, they’re working with folks who’ve never had a toy, or American artists, or people who are on the fringes of what would be considered the vinyl scene but still very relevant in the underground world. It’s just really great. Some of them are well known people like Kathie and Brandt [artists Kathie Olivas and Brandt Peters]…you’d have to look them up online to get everybody. But there was a few dudes who’d never had a toy, myself included, which was really killer…

It takes quite a while from start to finish to get a toy made. It took more than a year, and we had talked about it a year before that. They make a sculpt, they make a master mold, then I think they make a metal mold and pull the vinyl. Then they make a paint mask and actually paint it. It’s quite a process.

It sounds like it would be, to go through production and manufacturing.
Yeah, for just one little toy, it’s kind of crazy, which is why the collectibility is so high. The way Super7 does it, they produce in really small runs and small quantities. This isn’t about trying to make a dime. This is about trying to make a superior quality piece, and I think they’ve done that successfully, which is why I was excited about getting the opportunity to work with Super7. The first color wave sold out remarkably fast, and the second one has as well. I think it’s been well-received. My concerns were that they’d languish on the shelves forever and ever. The interesting thing is that the flippers haven’t gotten to them yet. People are saving them for their own collections. I haven’t seen a single one on eBay.

Another thing that happened, the larger sculpting community turns their nose up at people customizing toys. They think if you’ve taken something out of circulation, you’re limiting people’s ability to get their hands on it. But I’ve always felt that they’re toys, you can do whatever you want to them. I love the customizing aspect. There are dozens of dudes who are producing all kinds of radical reinterpretations of art. The first thing I did when I got my own toy was put my money where my mouth was. I invited everyone to buy them and fuck them up as much as they wanted to. Go nuts! Paint them. Some of the toy heads flashed me the middle finger on that one, but my friends just went nuts. Lots of customizers bought these things up. I don’t know how many of the original two color waves are left. They might be a rare collectible at some point just because everyone’s painted them. 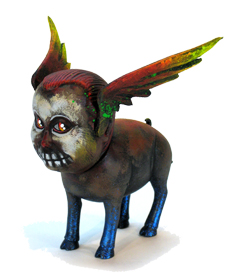 One other piece, I saw it on your blog, it’s like a pig with a human head and wings on the ears. Is that part of the exhibit?
Oh yeah, that’s Jermaine Rogers’ Squire. There’s a funny story about that piece. That particular one is about 5 or 6 inches wide, and maybe 3 or 4 inches tall. They made a few fiberglass ones that are larger than, or about the size of a real dog. Scaled up, that head is three or four times human size. It’s a really creepy piece. We were lucky to get one from Jermaine. When my in-laws saw it, they were like, “Holy Christ! Who put Bill Clinton’s head on a dog’s body?” I guess when you scale it up it does look sort of like Bill Clinton. We’re calling that piece The Harbinger, I think.

Leecifer’s Contemporary Conflagrations is open now through July 19, 2011. While you’re checking out his work, look for the rare Propane/Dragatomi Blue Honoo figure, which is sold out everywhere else, but now available at Dragatomi. Go to Dragatomi.com for more info.