Liv Moe is All About the Giggles 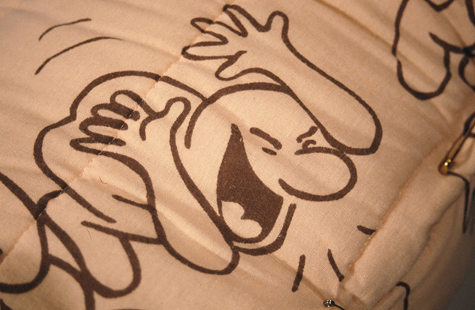 Go ahead and laugh. No, seriously—when it comes to her work, local artist Liv Moe intends to entertain. Drop all textbook philosophies and art-school vocabularies at the door, and prepare yourself to confront a hodge-podge of ordinary objects set against each other in such a way as to make you reconsider the objects we surround ourselves with on a daily basis. “My work really revolves around the environments that we construct for ourselves,” Moe explains. She says that although not all of her individual pieces have a specific meaning, there is a central theme that runs throughout her art, which is: “What American culture surrounds itself with. We’re a culture of stuff. We’re packrats; we have so much junk.” 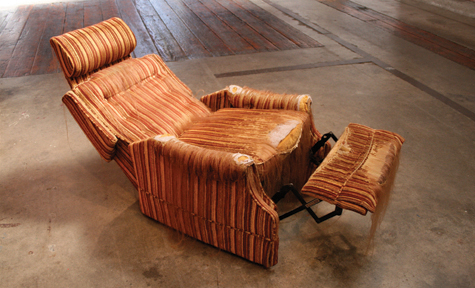 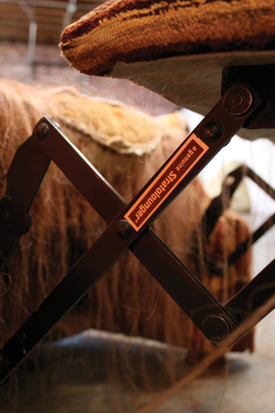 Her current show at The BrickHouse Gallery will run until Oct. 31, and is entitled Giggles. The show is titled after a particular piece bold and assertive enough to coax a nervous laugh from just about anyone: large male genitalia fashioned from a comic-print sleeping bag that Moe picked up at a thrift store. She was originally attracted by the cartoon pattern, but once she brought it home she noticed that this was no ordinary sleeping bag; it zipped up the center instead of the side, and the top was meant to be folded over on both corners so that someone could wear it “like a little cocoon,” she says. “When I put it together in my studio the way it was intended to be worn, I realized that it looked like a giant cock and balls,” she laughs. This phallic symbol created from such a light-hearted print makes for an interesting juxtaposition. “For me it references that nervousness that happens when kids are confronted with sexuality. It’s something bigger than they can understand, so the way that [they] address it is to giggle about it.”

Moe had been waiting for about a year for just the right opportunity to show this particular piece, and it all came together while planning her current show. Many of the pieces were previously shown during her thesis show at Sacramento State last April, and she remembered hearing a lot of laughter from people who viewed her work—and so, a theme was born.

“In some cases an uneasiness happens with some of the work. I think that’s why people nervously giggle when they see things that are odd or funny but they don’t totally understand them, so I thought it was appropriate to name the show Giggles,” Moe says.

In a conversation with this amazingly articulate artist, Moe shares the inner-workings of her artistic mind. 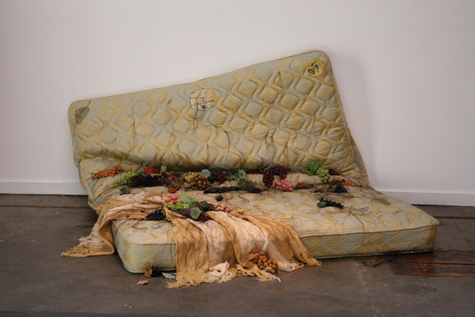 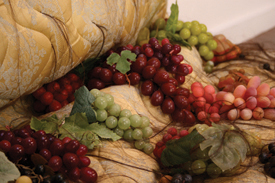 Tell me a little about your current art and how it came to be what it is. Did it start with an idea of something that you wanted to express, or did it just come to be on its own?
Once I started working with materials, I was so compelled to work with materials. It was all I wanted to do. Suddenly I was so excited about art and wanted to pursue a degree in it. It was like, this is what I want to do. I’m not totally sure how I’m going to do it or what my focus is or what I’m specifically interested in expressing through it, but this is what I want to do. I realized over time that I have a sensibility that when I approach objects, there are things that I just find humorous or culturally interesting.

Many of the items used in your art would be considered junk by most people; when did you begin to see these items as art?
It’s one of those things that you just 100 percent have to believe that what it is can be art, and push it as far as you’re comfortable pushing it”¦I’ve realized with my own art that once I start the questions, I’m over. I should just stop making the piece, [or] you start feeling that you’re just fooling yourself, and that what you’re doing is just silly or odd or dumb, and you can’t develop your idea any further than that.

Do you set time aside to collect the items used in your work, or do you just gather things as you come across them?
It just depends”¦. When I’m in my practice, I usually go looking for materials a couple times a week”¦ Sometimes something will start out really organically, like I’ll find one material, then I’ll find this object, then I’ll start putting them all together, and I’ll realize that in order to make this successful, I need a ton of grapes. So you mine the thrift stores as far as you can, and suddenly the piece becomes going to all the dollar stores you can find, and going on the Internet, researching how much rubber grapes cost”¦Once something comes together, you’re on this really funny journey.

You use a lot of items from the domestic sphere; do you consider yourself a feminist artist?
I identify myself as a feminist very distinctly, but I don’t perceive what I make as feminist work”¦ The work is something that is accessible to everyone and it’s not about furthering a feminist philosophy.

If you could have viewers understand just one thing after going to one of your shows that they didn’t think of before, what would it be?
It really is simple. It’s about the components you’re looking at, and then suddenly all that work became more accessible to me and more interesting, and so I think that that’s really the thing that I hope people will take away when they look at it is that it’s OK, you can really just look at what’s actually there and make your decisions based on that. 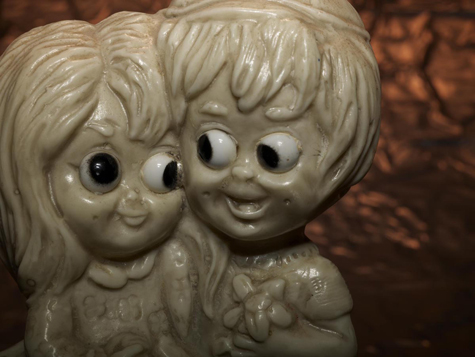 We Need Each Other