For those who know Mark David Manning’s art, next month’s exhibit at Gallery 2110 is atypical.

Manning is a traditionally trained oil painter who uses both real life and imagery to portray a balance between man, nature and machine. His interests are environmental and political, stemming from his upbringing in New Zealand and his personal beliefs.

In one of his older collections of household imagery, a still life of a vacuum is no longer just an everyday contraption when it comes dangerously close to sucking up fowl eggs.

In another previous work, Manning has painted a beautiful woman who suddenly seems wild and distorted as her innards fall out of her and whales swim nearby against rich reds on the canvas. This oil painting, Anti-whaling, is one of Manning’s favorites, encompassing his environmentalism. 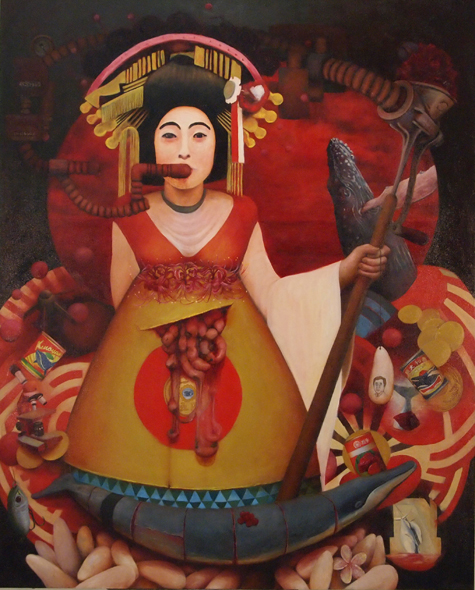 His latest body of work, Visual Odyssey, will delight and stretch the viewer’s mind in a slightly different way than Manning’s oil paintings have done with their strong messages.

Visual Odyssey is an interpretive study with more than 30 mixed media collages that are made from 99 percent recycled materials. Manning collected old photography, books and other odds and ends around his Midtown home and incorporated some oil into the final pieces.

“This is not something that I usually do. It’s not common for me,” Manning says. “This is a new direction I’m going for.”

The collages are all original and very different from one another, each telling their own stories, Manning says, but his inspiration came from Stanley Kubrick’s 1968 sci-fi epic 2001: A Space Odyssey.

“[The collection] is about a transition from early man, from the earliest beginnings, to how much we have advanced, from hand tools to flying,” he says.

His favorite piece of the collection is one of the five larger collages, called Flight, and uses a ‘50s-style palate of blues, oranges and teals with unique shapes.

Manning says the immediacy of collage is what appealed to him, as well as the ability to use color and shape as he has done with oil for years.Â 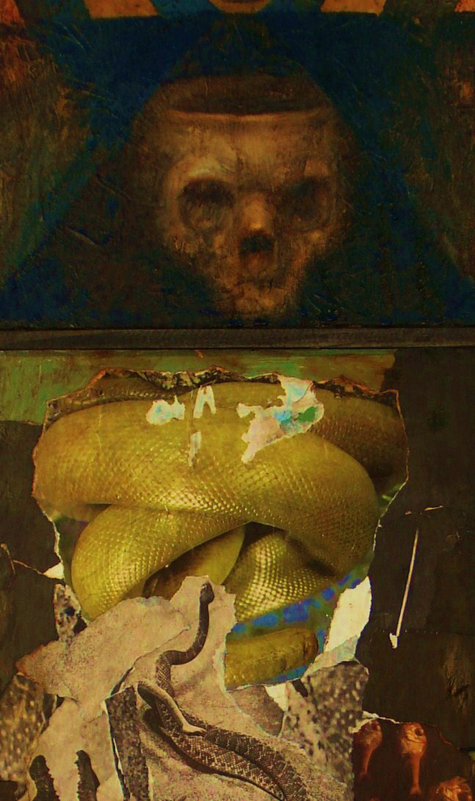 “Oil paintings, they’re very slow to build because it takes some time to get the right color,” he says. “Collage is more immediate than oil… You can flip through a book and find what you want. It’s more like painting a landscape, because you’re painting a lot faster. I like the immediacy of laying down the paper and tearing down the paper. It’s more raw than oil.”

Despite this newfound love, Manning says he will continue with oil painting and is already arms deep in his next body of work–a series based on Willy Wonka and Chocolate Factory.

“I’m pretty focused, and I’ll keep on doing what I’m doing and exploring different ideas,” Manning says. “I’ve always liked the medium [oil] itself. Color is incredibly important to me, and oil intensifies the pigment.”

These intensities work well with his subject matter, whether he’s depicting animals in nature or something more abstract like in his last show The Supernatural, with juxtapositions of unrelated manmade and natural objects unconventionally placed for still life.

His contemporary, sometimes crazy thoughts portrayed through his traditional painting style have been warmly received and supported in Sacramento thus far, Manning says. He only hopes gallery visitors will enjoy each piece of his newest exhibit and create their own stories from the images. 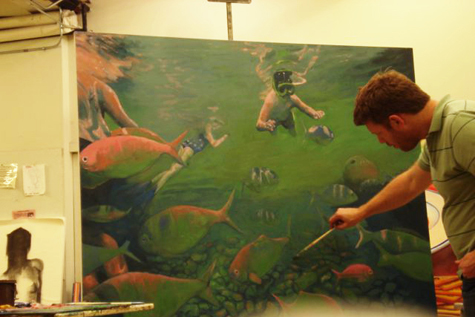