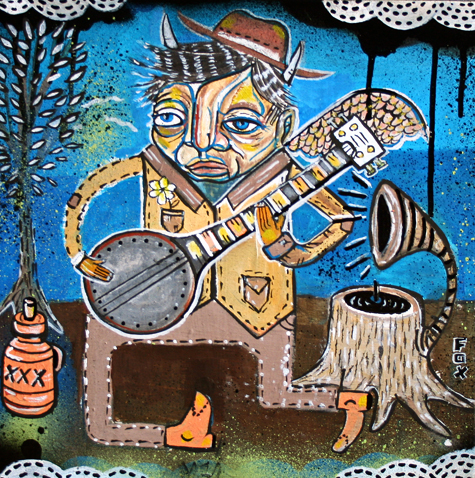 There is a certain air of mystery surrounding places off the beaten path. Especially to those of us who live in urban areas, lonely country roads, small towns and backwoods locales—and the people who inhabit them—prey upon our fears and curiosities. Area artist Mark Fox has seen this theme surface in his work in recent years. Born in Sacramento and raised in Elk Grove, Fox now lives in Marysville with his wife. The couple has been there for two years, and Fox has mixed feelings on his new home.

“It’s OK,” he tells Submerge, taking a break from preparing for a few upcoming shows. “I prefer living in cities. I like downtown Sac, because you can walk around, and there are trees. Up here it’s a little different. It’s laid-back country style, I guess.”

The new location has had a noticeable affect on his work, however.

“You get those true characters up here,” Fox explains. “We have my favorite guy up here called Marysville George; he’s really rad. He’s inspiring. He’s all about positivity. I try to base some of my art characters on people I see around here.”

He goes to the say, “Marysville reminds me of Elk Grove like 10, 15 years ago when it was smaller. Now Elk Grove is a little bit bigger, but it has that small town feel. It’s cool though. Everyone knows each other up here [in Marysville].” 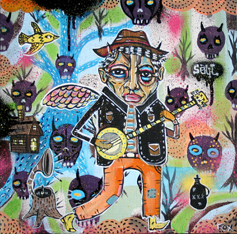 Apart from the change in scenery, Fox’s recent preoccupation with “hillbilly, folkish” art stems from the death of his mother around three years ago. His loss led him on a road to self-discovery as he ventured back to Tennessee where he learned about his mother’s Melungeon heritage.

Melungeons are people of mixed ethnic heritage who inhabit the southern Appalachian regions in Tennessee and Virginia.

“They don’t know where they originated from,” Fox says. “They’re considered not fully white, a little bit darker, so treated like African Americans back in they day.”

Fox says that incorporating Melungeon-inspired images into his work is a way of showing respect and a sense of pride for his mother’s ethnicity, especially since the group was often discriminated against and ostracized.

“I try to incorporate that and bring it out because it was such a derogative thing to be called a Melungeon,” he says. “They were considered boogey men.” 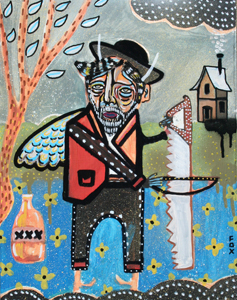 Though this phase has lasted a few years, the 34-year-old artist (who now paints full-time) has painted his whole life. The 13th of 14 children, Fox grew up in a religious household and his family didn’t always look favorably upon his art.

“I was diagnosed bi-polar, so ever since I was a kid, I think that’s been my therapy—my way of expressing all the problems I had in my head,” he says. “Recently, when my mom passed away, that added to it. That inspired me to put more meaning into my work.”

Fox points out that, though he incorporates a folk art feeling in his work, he likes to mix it up. Living in Sacramento for so long, Fox also likes to add an “urban aspect” to his painting as well. Also, further perusal of his work reveals his abstract leanings.

“I think a lot of it is how my mood is, how I feel about what I want to get out,” Fox explains. “I did start out more abstract. Artists like [Jean-Michel] Basquiat—that whole abstract expressionist movement, inspired me. I was hella inspired by those guys—just hardly any subject matter, just wild paint, expression.” 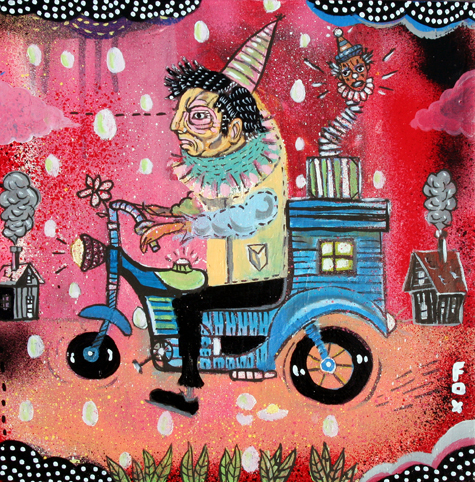