UC Davis has consistently hired and/or trained some of the top American artists of the last half century.

Its proximity to the Bay Area and Greater Sacramento Area, both brimming with million-plus populations, galleries, museums, local artists and global visitors, allows the public to experience the art that has come out of this relatively small but renowned art department.

Elliott Fouts Gallery on P Street in Sacramento is taking advantage of the talent with its show An Eclectic Grouping, featuring select faculty and alumni. Among the renowned are professors emeriti and Bay Area Figurative Movement artists Roland Petersen, Manuel Neri and Wayne Thiebaud. Alumni—many of whom studied under the aforementioned—include Peter VandenBerge, whose sculptures have shown at the Crocker Museum, SFMOMA and the Smithsonian Institute; his daughter and sculptor Camille; sculptors Tony Natsoulas and Rene Martucci; and painter Vonn Sumner.

When 27-year-old Michael Ramstead received a request to join the show and round out this list, he didn’t realize he’d be the youngest of the group.

“That’s actually quite an honor, and I really appreciate the gallery reaching out to me and inviting me to show alongside these accomplished artists,” he says. 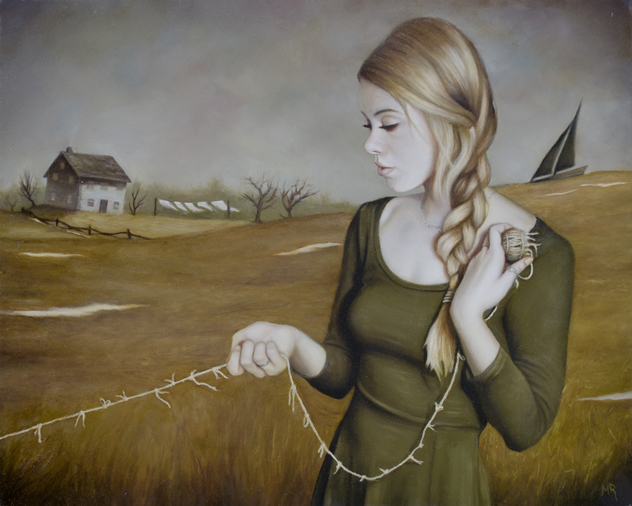 The invite isn’t really a stretch once Ramstead’s work is placed with the others. The Long Beach, California resident and 2010 graduate of the UC Davis Art Studio focuses on pop surrealism, portraiture and lowbrow illustrations that reflect his generation just as the Figurative masters reflected theirs in the ‘50s and ‘60s.

Ramstead fell in love with painting in his senior year of high school when he was exposed to more illustrative artists at that time.

“Usually you think of modern art as more interpretive and weird,” he says. “I’ve been more influenced with cartoons and video games and seeing fine artists use those as inspiration…it’s a more illustrative style than I’ve ever seen. I’m really glad this type of art has become more popular over the years.” 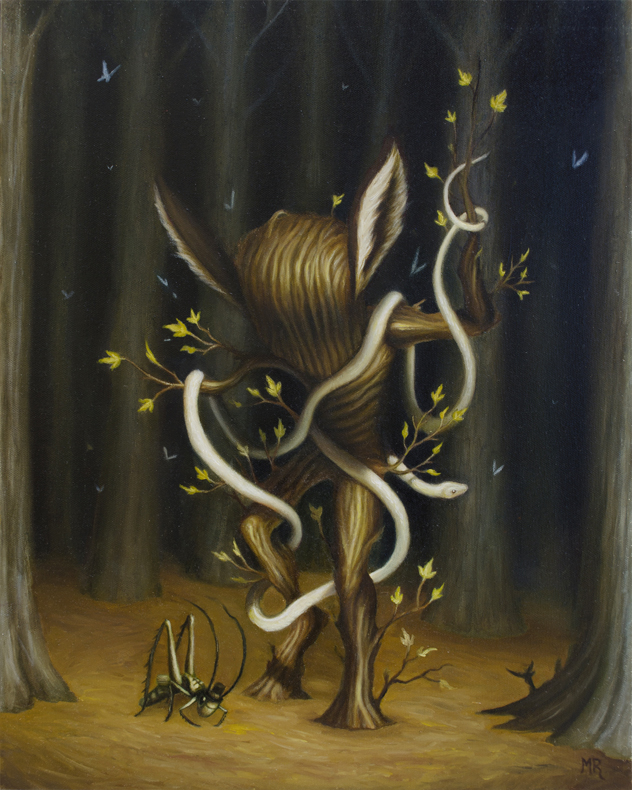 Ramstead says he wants his fine art—the oil paintings—to reflect more of his skill and himself as an artist, while his illustrations are more of a quick expression of his feelings.

“I take in a lot of pop culture, movies and music and they mean a lot to me, and these illustrations are a fast way to get that out,” he says. “It’s still me, but it’s a quick way of saying, ‘hey I like this.’”

Examples of the illustrations are definitely more prominent across Ramstead’s social media, as he’s another in a quickly growing line of young artists who has embraced platforms like Instagram, Tumblr and Twitter to share and sell art.

His influences and thus his connection to his fans have become better established through these means. So basically, if you’re feverishly texting your friends about Wes Anderson, Taylor Swift, ‘90s cartoons, podcasts, manga and anything else pop culture, Ramstead is doing the same, but also expressing his thoughts about it all in intricate sketches and humorous caricatures. 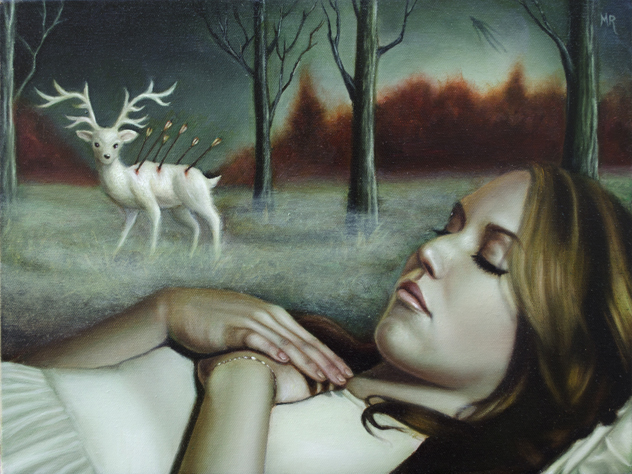 “One thing that got me into drawing was horror movies,” he explains. “I did a challenge for myself and watched a horror movie every day in the month of October and did an illustration based off of it. I became a fan of the more cartoon-y ones.”

These, and some very sweet illustrations in the same vein but with romance movies, can be found on Ramstead’s website (Michaelramstead.com) and social media pages.

“I’ve been able to connect with people like directors and singers who say they like my interpretation and it’s really cool to see that,” he says. “There are a lot of galleries right now that are focusing on pop culture art as well.”

For example, Ramstead has painted scenes from movies like True Grit and Rushmore for showings at Spoke Art Gallery in San Francisco.

His lifelike fine art also has a similar but more intricate inspiration.

“For a while the inspiration for the paintings has been different stories based on the paranormal, folklore, Greek mythology, horror movies and horror stories,” he says, which is noticeable in most of the paintings but not always in the foreground. Sometimes a portrait of a young woman looking scared or disturbed at the viewer might have a creature’s shadow or skeleton lurking in the background.

“Mythology is pulling ahead as a major influence right now. But I’m trying to put it in a specific era or time period that stylistically I’ve always been drawn to.” 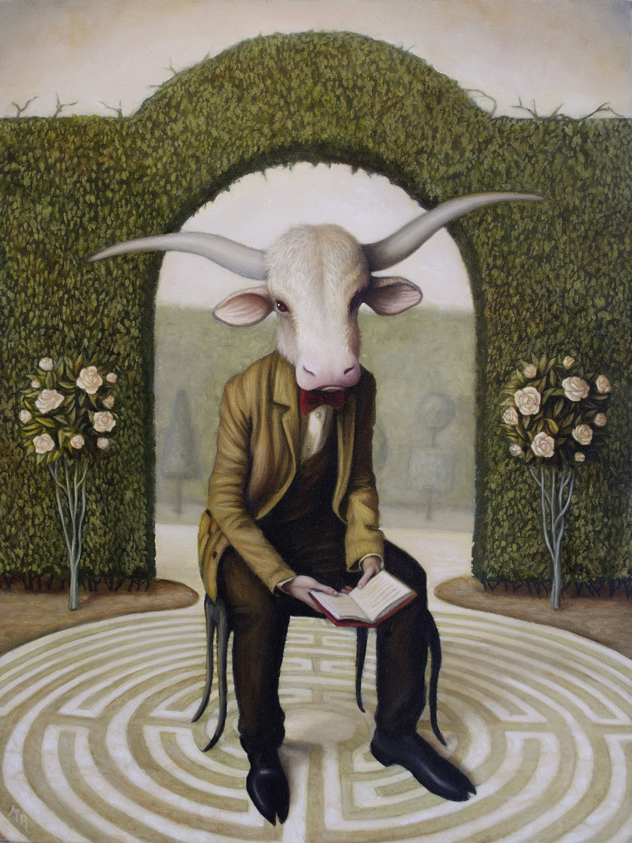 The paintings he is referring to include Ariadne, Chione, Centaur and others, that portray women or bodies that look contemporary but match the myth in subtle scenic ways.

Many of his paintings portray women. Part of that, he says, is aesthetics—because he finds women beautiful—but the other part he thinks may be more psychological as he has always been drawn toward heroines in stories.

For the Elliott Fouts Gallery show, which runs Feb. 7 to March 5, 2015, Ramstead has three paintings: Lamplight, Phone Call and The White Hart, all of which portray women. 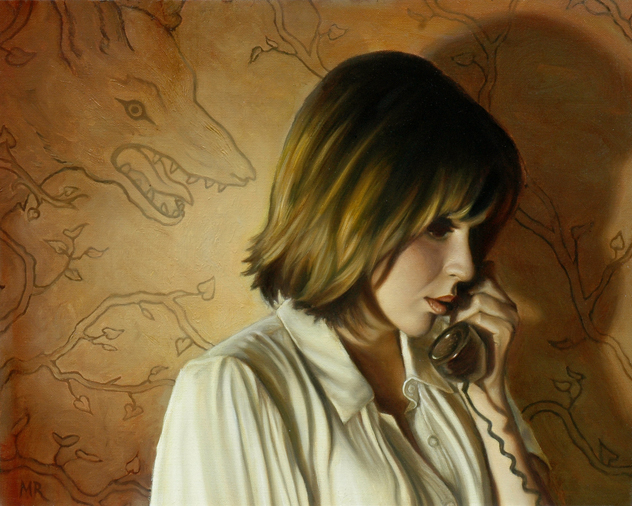 “These three paintings came out of a time when I was shifting the focus of my work from a more fantastical and cartoonish style and subject matter to more realistic portraiture,” he says. “I was consistently impressed by artists who were able to capture the human form so well and that’s the challenge I set my sights on.”

Ramstead adds that this style allowed him to hone his technical abilities. He wanted to hold on to his more fantastical elements, but also ground his figures in the real world to a certain extent.

“In these, mood is more important than any one specific narrative, though I hope there’s enough there for people to be able to create a story of their own in their minds,” he says.

Take a look for yourself starting Feb. 7 at the gallery on 1831 P Street. 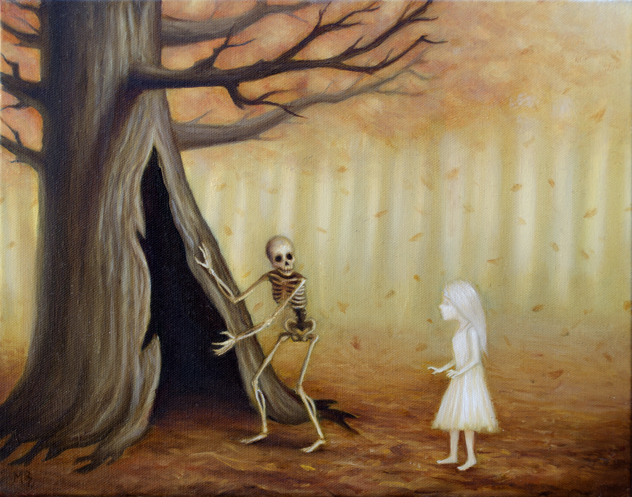 Elliott Fouts Gallery’s hours of operation are Tuesday through Friday, 11 a.m. to 6 p.m., and Saturday and Sunday, 11 a.m. to 4 p.m. The gallery is closed on Mondays. For more information on this and other exhibits, go to Efgallery.com.