Butting Heads, a solo art exhibit by Michael Sarich at JayJay Gallery ending May 24, 2014, is a visual exploration of pop iconography through painting and sculpture. Sarich’s modern, allegorical, layered compositions are each tornadoes of symbolic imagery that include elements of nature such as birds and fish, intertwined with commercialized imagery like Mickey Mouse, a recurring illustrative devil girl and the Virgin Mary. Large-scale, differing, yet related pieces tell the story of the state of our culture and the banality of its plasticity.

A professor of art at University of Nevada, Reno, Sarich’s own education in painting, drawing, sculpture and printmaking spanned the globe from Illinois and Oklahoma to Austria. His work has been spied by gallery and museum patrons throughout the United States, and even overseas in London and Germany.

While he makes some money off his art, his main source of income is teaching. Says Sarich, “It’s always nice to see how somebody else perceives the visual world.” He works at the university with students that include his kids, and he smiles as he discloses, “I paint right along with them.”

Sarich resides in Reno, where he creates his work mainly in his garage that he has converted into a studio, and spends the bulk of his waking hours allowing social and political themes to take shape beneath his diligent hand.

In spite of being afflicted with Parkinson’s disease, Sarich is a prolific painter and sculptor, and a collection of 30 years of his work was recaptured in a book by Anne M. Wolfe and Kirk Robertson, entitled Like, Love and Lust.

I met with Sarich—a soft spoken yet thoughtful and eloquent man who brought my own questioning voice down a few decibels—at his art opening at JayJay Gallery in East Sacramento on March 8 to talk about his life and the exhibit. 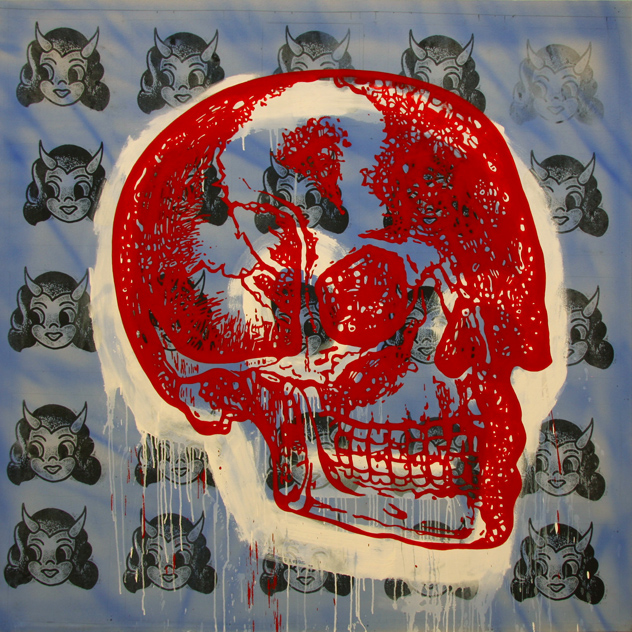 Can you explain the significance of the recurring, intertwined themes of Christianity and Disney characters in your art?
It’s kind of a duality, a hate-love relationship. Disney meant something good, but now it’s been commercialized and spread all over the world. It’s the same thing with Christianity. Icons have taken on a commercial value. The Virgin of Guadalupe is on T-shirts and bumper stickers, so it’s kind of lost some of its identity I think, in terms of reverence.

At the onset of beginning a sculpture or painting, do you have a preconceived notion of a message you’re trying to convey, or is it more organic?
It’s more stream-of-consciousness. I just go with the imagery and let it roll, and I react in a subconscious way. The paintings and drawings just take over. With sculpture, you’ve got to make sure they stand up, so structurally, you have to think about the integrity as you work. But when I glaze and paint them, I just react to the form and tattoo it. 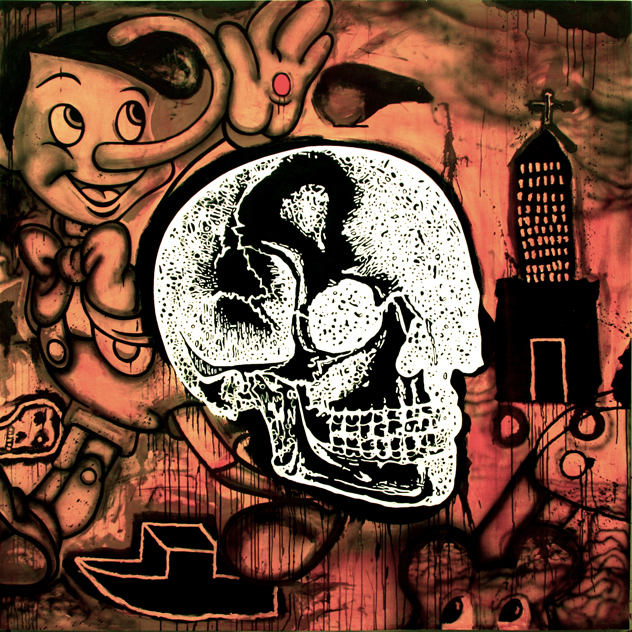 You’ve done shows all over the world and throughout the United States. When you do shows, solo shows specifically, do they tend to have a unified theme?
For me they’re all unified, they’re all related, like a theme I’ve been working on for 10 years. Pop iconography as opposed to high art and low art, and what that means…again, they butt heads, high and low. So I push both ends of it.

Do you have a favorite show you’ve participated in?
I guess the retrospective at the Nevada Museum of Art. It’s where my book came from. It’s 30 years of my work. So that was kind of amazing to see all the shit I did in 30 years. Revisiting the past through imagery is kind of a weird thing.

How or why did you begin doing art?
I’ve always drawn since I was a kid, and I got some recognition for it so it kind of kept my interest. When I was in high school I was in-school suspension for a year, and the art teacher would say, “Can you do a drawing every week?” or, “Can you do a painting every three weeks?” It raised my standards of work ethic, and I just loved it, because it was something that I felt was mine, that no one could take away. Growing up with six brothers and sisters in a tiny house, that was real important to me to have something I could keep as my own. 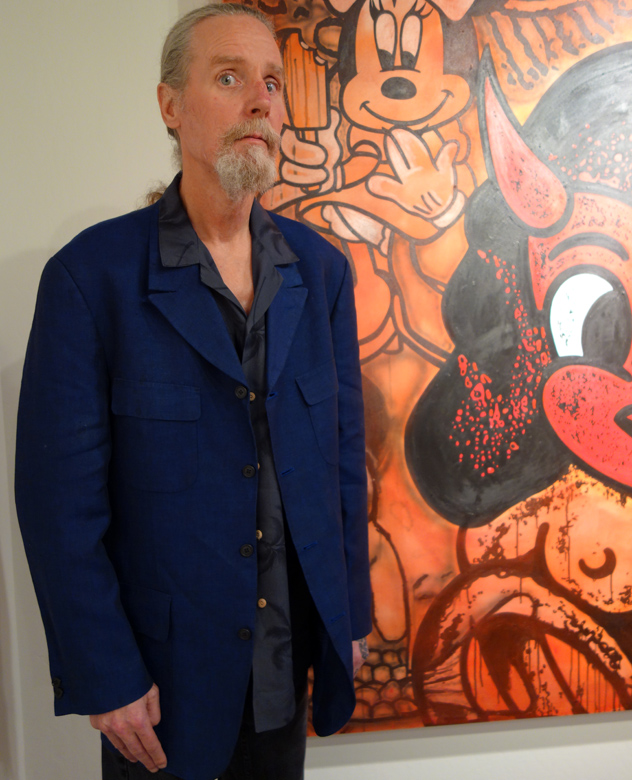 What media/materials do you use for your sculptures and paintings?
Well, it’s all about the mark. There’s a variety of applications but it’s all about the speed of the mark: slow, clumsy marks as opposed to rendered marks; airbrushed marks versus the painted mark…so I’m using the language of mark-making to put all these pieces together. Some of the sculptures are glazed and some are painted—mostly ceramic but I do wood, too. I did a series of puppets. I call them puppets but they’re wall pieces that are hinged.
It’s slowed down a little bit because I have Parkinson’s. Lately it’s affected my ability to make ceramics. I can still paint and draw. I get about six hours every day. I’m good in the morning, till about 2 o’clock, then I take more pills. I’ve got a sort of window of work time. I get a window of work time, it’s about six hours but it used to be eight. I’ve had [Parkinson’s] for 14 years, and it gets worse over time, but I’m still maintaining.

As I walked around the gallery to take in his exhibit, I was overwhelmed by a dizzying sense of feeling lost within and sickened by the “bankrupt on selling” nature of today’s world, while simultaneously being drawn to the imagery of icons that are an ingrained part of the modern consciousness collective, akin to archetypes. I highly recommend paying a visit to Jayjay Gallery to experience Sarich’s world before the show comes down on May 24, 2014. JayJay Gallery is located at 5520 Elvas Avenue.