Take a Load Off

Sacramento has proven itself a thriving community for the arts, and there has been no shortage of artists wanting to showcase their wares at various galleries. And while most people equate art with the upper crust set and formal gatherings, many of the area’s hottest spots for seeing current pieces by emerging artists are, for the most part, lowbrow affairs.

One artist from Los Angeles’ Boyle Heights area, 39-year-old Nate Page, has made considerable headway across the country and even on an international level with his revelatory work and keen attention to nuance and detail.

Verge Center for the Arts, which is curated by the thoughtful Liv Moe, has opened its doors to Page’s Couchbleachers installation, which is literally a 55-foot-long bank of bleachers made up of wood and couches found in Sacramento. In turn, the installation has inspired a dedicated movie series—Friday Lunch Hour Movies—for those Sacramento workers who can enjoy a long lunch without any repercussions from his/her respective bosses. 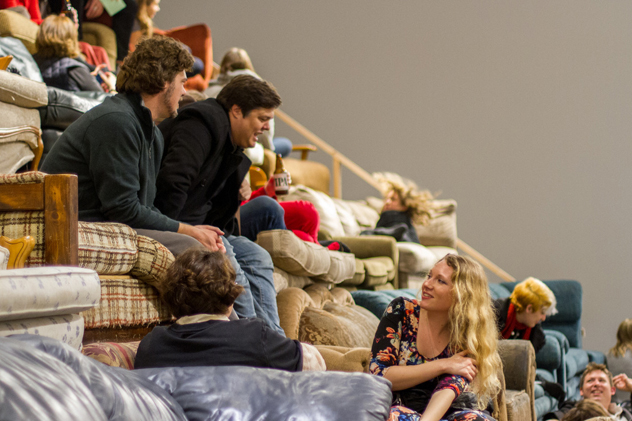 Page, however, has earned himself considerable accolades and some tidy sums of money in the way of scholarships and grants through his efforts working outside the box.

Although a part-time teacher by day to make ends meet, his greatest love is creating inspirational works that are not only functional and thought-provoking but also can be of use.

From his humble beginnings in Wisconsin through his time spent in New York and California, art has afforded Page the ability to be a part of many spectacles in different countries and cities. During a recent phone interview, he seemed very enthusiastic about his future. 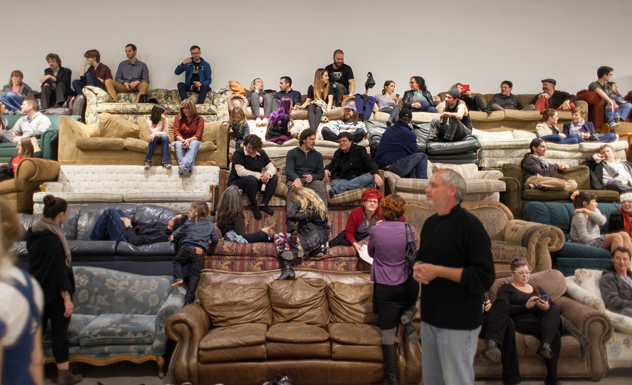 It’s no secret you’ve been doing art for most of your adult life. I love the art on your website and the different styles you’ve incorporated over the years. How did you get started?
My family actually was really not that into it. I think it all began when I just started doing stuff and making things by myself when I was kid. My grandfather, who recently turned 95, was a sign painter, and he got me thinking about making big pictures and things of a bigger scale. Come to think of it, he was always interested in what I was doing and was a big supporter of me in general although he didn’t understand most of it.

Are you able to make a full-time living from your art? What is your other day job?
I definitely need to work to pay bills. I teach a design class at Woodbury University in Burbank and am an adjunct professor in design. Right now I get anywhere from one to three days a week on the average, but it is my steadiest income source. Additionally, I love teaching and it’s totally another side of what I do. A lot of artists don’t teach since they can’t deal with students or don’t know how to interact on a personal level. 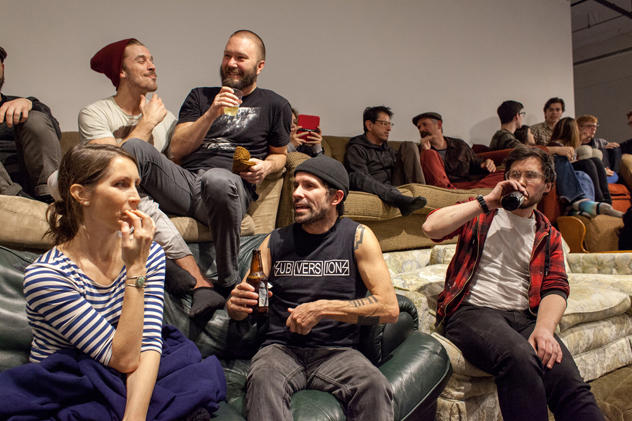 How did the Couchbleachers installation idea come about?
In 2011 I had the first Couchbleachers exhibit in Cleveland with Machine Project, a loose network run by Mark Allen that does a lot of installation. It was at a venue called Spaces Gallery and I just wanted to make something unique that was usable. A general contractor was hired to help create the piece while I drew up the plans and worked everything out as well. We also found new solutions about doing things of a larger scale. Since I often collaborate with different people and get help from venue staff to help, it can be beneficial to both parties. Since they already have a system set up in advance to deal with civic-scale environments, I often work that way.

Have you ever thought about working in tandem with live musicians to create stage sets and costumes? It seems right up your alley given a lot of your specialized art [referring to his face art from Italy installation featured on his website].
Honestly, I’ve never done it. I’ve also never really had the opportunity to think about it since nobody has approached me for it. I’d definitely be interested in doing something, but I’d really need to get into the mindset of the band as a whole enterprise. Once more, it would be extremely important to understand and know the original intentions of the venue and artist and what they’re trying to emphasize and not.

Do you have any plans to include any other artists on current projects?
I don’t have any plans to collaborate with anyone. I only work with people in the institutional sense since they help me create the bridge to reality and produce what’s in my mind or on paper. Although I have done a lot of collaborating in the past, I’m in the headspace now where I want to work solo only.

You’ve moved around quite a bit and have been anything but sedentary for most of your life, correct?
True. However, I have been living in Los Angeles for nine years, New York for six years and grew up in the small town of Waukesha, Wisconsin, which is a suburb of nearby Milwaukee. I used to live in Milwaukee as well right across the street from Eagles Ballroom [the area’s most popular live music venue]. There is a restaurant named Steny’s Tavern and Grill where I was a cook. It was a full-on biker hangout. It was a great job since I got all my meals for free and got to hang out with lots of Harley riders. Since Harley was developed in Wisconsin, it was very commonplace around there (and still is) to see bikers everywhere.

Tell us about your Cooper Union Summer Residency Program in New York City?
That was actually one where you needed to apply. It was much less personal than all the other residencies since it came with formalities and I was, ultimately, on a scholarship to go there. They gave me enough to get by but not to live on. At the time I was also dating a woman who was coincidentally from Milwaukee and lived there with her for roughly three years in the SoHo district. After we split up, I later moved into my own place in Bushwick [section of Brooklyn].

And what about your residencies abroad in Austria and Italy?
This well-known Austrian artist Heimo Wallner was doing a show in Milwaukee and somehow we got introduced. For some reason, we ended up at both my studio and my apartment and he liked what he saw obviously. At the time, I was living in there with my girlfriend and she had turned everything in the house including furniture and fixtures upside down at my apartment. We were in a fight at the time, and I totally forgot the place was a wreck. It seemed like he was more impressed by that visual than anything else but my artwork ended up getting me the gig at Hotel Pupik, Austria. Heimo was a big supporter of my early art life, and I thank him immensely for the guidance. In 2006, I had another installation at O’Artoteca in Milan, Italy. That one happened through a woman friend of mine named Sara Serighelli who I knew from my previous residency in Austria. It was very organic and she simply asked me one day after months of continued contact.

School is expensive and you’ve attended three different ones in three different states. Explain how it all worked out.
My parents helped me for undergraduate work but, unfortunately, I still have a decent amount of debt. I stay in contact with collectors, but, honestly, I simply tell them I don’t have it. I don’t have the extra money and they’re not going to get it while I need money for supplies and living expenses. Art school is ridiculous when you look at the money you pay and then the money you’re projected to get paid with that degree. You usually have to do a couple of different jobs to make ends meet and some people give up altogether. I’ve managed to make it work so far. I got the California Community Foundation Emerging Artist Fellowship grant for $15,000 a while back and have gotten others which have helped but were much smaller.

You’ve mentioned you like working solo. Is there any chance you’ll date again given your experience with furniture-arranging ex-girlfriends?
Right now I don’t have a girlfriend but you could say something is brewing. I’ll give it to you off the record, though.

Nate Page’s Couchbleachers runs Wednesday through Saturday from 11 a.m. to 6 p.m. and Sundays from 12 p.m. to 5 p.m. He’ll also be a featured speaker at Verge Center For The Arts’ In Conversation series on Wednesday, March 11 at 6:30 p.m. All ages are welcome and the event is free (although a $5 donation is suggested). For a full list of events, including a schedule of the remaining Friday Lunch Hour Movies and the upcoming Verge All Nighter slumber party/film festival, go to Vergeart.com. Verge Center for the Arts is located at 625 S Street, Sacramento.