There seems to be an inherent marriage between the creation of art and the enforced destruction thereof by the powers that be. I mean, even John Lennon had an FBI file. So when local aerosol artist Paydirt7 first began his journey into the street-savvy world of writing on freight trains and buildings, he most likely had little inkling that he’d be targeted for the illegality of his work, despite its obvious radiance. But just as quickly, Paydirt7 hit”¦well, you know”¦and even has a commissioned piece hanging at City Hall. His work reflects both the vibrant urban decay of society and also the imaginary cartoon worlds of comics; but both breathe deeply with zeal, and there’s an irregular neo-tech tenderness to his work that separates the oil from the vinegar. Paydirt7 took some time out to chat with Submerge about his beginnings, his middles and why Beat Street changed his life. 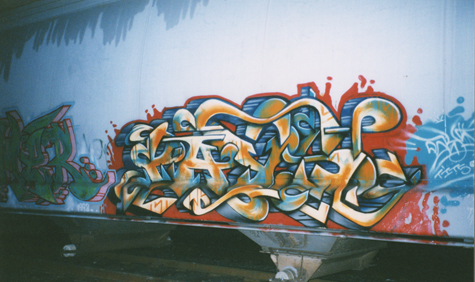 I understand that when you started out, you encountered a bit of trouble due to spray painting on the sides of freight trains. Can you explain a little bit about that era of your foray into art?
Painting freight trains is an evolution of graffiti from the subways of New York. Instead of a train running just in one city, they roll across the country. To me, a piece on a train takes on a life of its own.

What made you gravitate toward aerosol as your preferred method of creating your art?
Before I had even touched a can of Krylon, I was drawing comic book heroes and doing watercolors—you know, that first set of watercolors they give to kids. I’d sit around for hours painting dinosaurs, drinking red Kool-Aid and eating saltine crackers. My first exposure to hip-hop was watching Beat Street as a kid. I think it was around ’85 or ’86, and it was playing on the VCR at a childhood birthday party. Back then it was more about break dancing, and I remember hanging out in front of the supermarket trying to spin on my back on a flattened cardboard box. I think shortly after that we upgraded to a sheet of linoleum. That feeling of fun and creativity is what attracted me to hip-hop style graffiti. I started using an airbrush but got annoyed changing out all the cups of paint and being tethered to an air compressor. When painting murals 20 feet by 20 feet, it’s much quicker with spray paint. I can blast large areas of color with a fat cap and climb to the top of ladders with a papoose full of spray cans. I just like the mobility it provides. Also there is a sense of adventure and interaction with your environment painting outdoors with aerosol.

Your work reflects a lot of different influences, from comics to urban street art to pop culture; do you enjoy working outside of a presumed theme for your pieces?
There are so many styles and subject matters to explore. Some times I feel like Bob Ross, other times I feel like painting ridiculously exaggerated cartoon characters and graffiti letters. No matter what it is, I think my underlying technique and touch shows through.

What did it mean to you to be commissioned for a piece at City Hall after having so many speed bumps with legal issues?
I grew up in Sacramento and it’s a pretty small community, so it’s kind of hard to hide from the po-po. I started writing in ’93 and shortly after that began receiving commissions by local businesses. I always wanted to go to art school but did not have the rich parents to pay for it. Also, I was already making a decent living painting murals so why go into debt paying back student loans? When I turned 18, I began teaching computer graphics and mural painting classes to kids in the day, and at night I would be painting freights in the yard. Shit was nice for a while, but when five cop cars show up at your house with a search warrant and you find the FBI has been watching you for the last year, things change. So I guess starting in the street and ending up with a painting in City Hall is a great irony.

What piece of yours are you most proud of?
Top of the list would be when I went to Europe and painted passenger trains in Switzerland. Watching the train I painted five hours ago roll in to the station bustling with people had me jumping out of my sneakers. I imagine it’s the closest I’ll ever come to experiencing what the original writers in New York must have felt when they saw their pieces running on the subway. 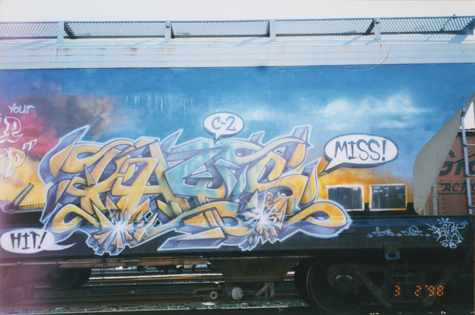 About how many pieces do you create in any given year? How prolific of an artist are you?
Now days I’ve been doing lots of commercial work and it’s hard to find time to paint just for me. I tried for a long time to do two to three paintings for every commissioned piece, but when your hobby becomes your career, you need to find some time to walk the dog. I have some real radical pieces that I’m working on right now—a 12-foot by 8-foot canvas that’s going to disturb some people. Also, I’m becoming more involved in animation and making video of graffiti inspired letter structures that bounce and pulse to music.

To whom or what do you owe your dedication to perfecting and progressing your craft?
My father was born in Hawaii and learned to carve traditional style tikis from a native Hawaiian. So having 5-foot-tall, meticulously detailed sculptures around the house while I was growing up showed me what could be achieved with patience and concentration. 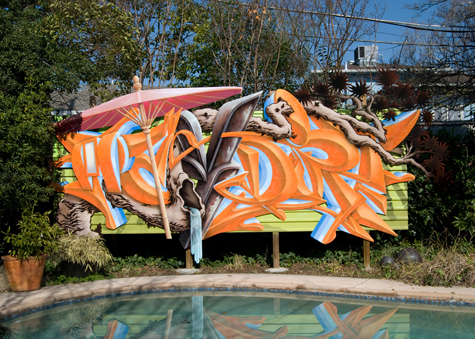