Gut-wrenching, thought-provoking, nostalgic, arousing, anger-inducing… these are some of the common impressions that artists often seek to evoke through their art. This intentional pulling of heartstrings is either accomplished by means of cognitive antecedents or clear messaging through powerful imagery. It is often argued by art critics that good art isn’t just a pretty picture; moreover, it makes the viewer feel some kind of way. But Richard Kuoch, known in the art world as PodgyPanda, just wants to make you smile. Maybe even chortle or LOL. 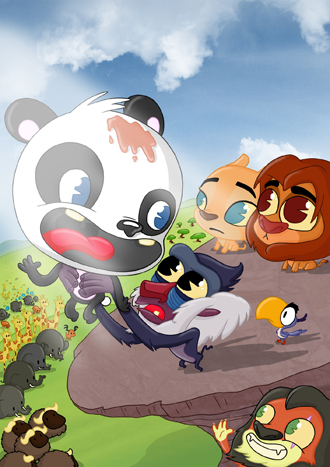 In his first ever solo show in the United States, Kuoch is revealing his newest digital illustration series at Dragatomi in Midtown Sacramento. The series places his cute little characters, familiar to fans of his previous works, into recognizable Disney movie scenes. In one of these pieces, his panda character replaces Ariel as the mermaid bursting out of the foamy ocean and onto a rock while in song. In another, the panda as Tramp shares a single strand of spaghetti with Lady in Little Italy. Another illustration depicts PodgyPanda as Simba from The Lion King being held up by a baboon character over Pride Rock in the iconic birth announcement. You get the idea.

The effect is like being bombarded by adorableness and humor, although people who like to read into things could probably extrapolate some meaning in the theme in regards to pop culture, icons, blah, blah, blah. Kuoch says he just wants the viewer to feel happy. Beyond his little dudes’ unabashed cuteness, his use of cartoonishly vibrant colors also lends to the visually pleasing and uplifting result of looking at his pieces.

A New Zealand native, Kuoch just moved back home to Auckland after a two-year stint in London. While in England, he was lucky enough to land a job at Kidrobot, the famous adult toy company (not that kind of adult toy—the collectible, endearing figurine sort) and was able to bolster his art career to new heights. He has shown his work in the United States in group shows, as well as in Canada, New Zealand and Europe. His first solo show was in Calgary. 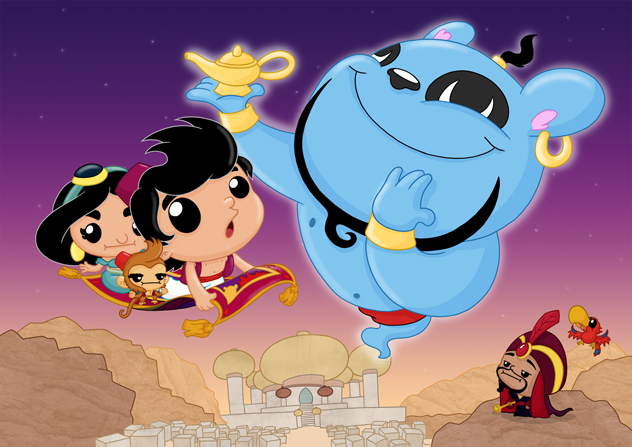 The solo show at Dragatomi opens on Second Saturday, Aug. 9, and will be coming down on Sept. 12, 2014. If you’ve never popped into Dragatomi before (it’s on J Street between 23rd and 24th streets), it serves as the perfect venue for this show. Dragatomi is a gallery and boutique that features toys, apparel, art books, and art inspired by urban pop culture—PodgyPanda fits right in.

Besides his popular digital illustrations, Kuoch also creates logos, drawings on wood or paper, resin toys, and apparel. His updated website launch (Podgypanda.com) is slated to correspond with the solo exhibit at Dragatomi, and his online shop is bustling, though Kuoch says it usually experiences a spike in sales following a show. Exhibit attendees can also purchase his work in person at shows—Kuoch likes to attend his shows so he can meet the people who come to them.

With a background in animation, Kuoch’s cheerful imagination led to the birth of the characters that are depicted in a unique world throughout his work. PodgyPanda is sort of the main character, with a cast of supporting pals. The characters are adorable little chaps in odd situations or locations that support his overall motto about art—“Blink, smile, share.” His father influenced his outlook by being a funny guy that loved to make people laugh, and for Kuoch, making art is all about the importance and contagiousness of happiness.

In addition to sharing his art on his website and at exhibitions, PodgyPanda is all up in the social media, too—Facebook, Tumblr, Instagram, Flickr, Pinterest, Twitter—and Kuoch has participated in Creative Mornings in Auckland, a breakfast lecture series for the creative community which takes place in cities around the world. These rad and inspiring themed talks are available to view online at Creativemornings.com.

“’Blink, smile, share’ refers to an emotion, what I want people to get out of experiencing my art. I try to evoke some sort of feeling, mostly a happy thought worthy of sharing,” explains Kuoch, who hopes to see your smiling face at Dragatomi.