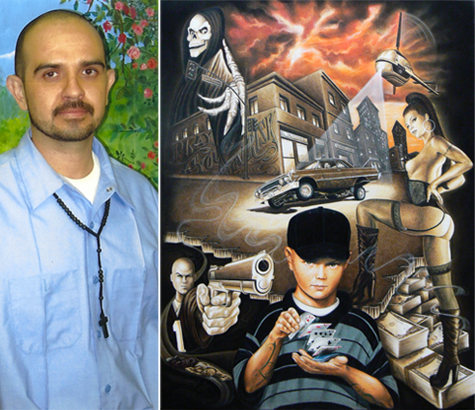 The art of Salvador Aceves displayed in Spanglish Arte gallery on the corner of 23rd and I streets depicts the graphic and unforgiving lifestyle of the prideful Latino gangbangers. At first glance it is a glorification of the lascivious and criminal temptations of a deviant youth. But dismissing Aceves’ collection as such is a crime. Aceves’ “gangster’s paradise” is the work of an exiled man confronting his last chance at redemption.

Aceves was incarcerated at the age of 17 for first-degree murder, after living in the United States for two years. His family moved as illegal aliens from Jalisco, Mexico to Santa Ana, Calif., in 1989. His infatuation with the neighborhood gangs began with fights at school, arrests and short trips to the California Youth Authority juvenile halls. By age 19 he was in a Level 4 maximum security prison serving a 25-to-life sentence.

Aceves discovered art in prison, and with not much of a life lived on the outside, he drew from what he knew–gang life. His drawings were not done in admiration, but to escape perdition by facing his memories and exploring the deceptions that lead to a banger’s demise. “When I first came to prison I didn’t know how to draw, much less paint,” Aceves wrote in a letter to Submerge. “Interested in the arts, I collected any kind of art material I was able to get my hands on. Then through a quarterly package, my sister sent me a tablet of Bristol board paper and a set of 48 Prismacolor pencils, and it was then that I discovered color and fell in love with it.”

With three years remaining in his sentence, Aceves’ communication with the outside world is limited. Our correspondence was restricted to a letter sent and a letter received, but it was clear from our brief exchange he is not the delinquent that entered prison. The tough-mindedness instilled in him as a “graduate of C.Y.A.” has matured into wisdom to warn future generations of the perils of the lifestyle. Through the poetry and stories written alongside his artwork, he presents a deeper criticism of gangs often overlooked by outsiders who either glorify or brutalize the culture.

The following is pieced together from our correspondence, in which Aceves explains the discovery of his talent and the failing institution of C.Y.A.

I’m curious as to how long you were in a maximum-security prison before the opportunity to profit from art became apparent to you. Did you discover the venture on your own or did the art bring recognition, which then prompted a figure within the prison to inform you of the profits possible?
It never crossed my mind then, I just did it because I truly loved and enjoyed doing it. And I never forget the first piece I ever sold. It was a drawing I had up in my cell-wall, and this guy that used to pass by my cell all the time… one day he asked me if it was a poster, and he offered to buy it, to put a price on it. Of course I didn’t know how to price my work. He offered $25, and I was satisfied with that. I was just happy and proud that someone was willing to pay for something I had enjoyed doing. And that’s how it started really. It was other inmates that priced my work, and the old law of supply and demand came to apply in my case. I could only produce so many works a month, so they would offer to pay more just so I could do a piece for them.

As you were probably informed I was incarcerated at 17 years old. My parents, disappointed and demoralized, returned to Mexico only three weeks after my arrest. So from the beginning I was left to fend for myself, so at the beginning I only made enough money to pay for the basic necessities. Hygiene items (toothpaste, soap, deodorant, shampoo, etc.), a little bit of food.

When I started to profit a little more I made a point of saving some of the money I made. After paying for supplies and the things I needed in here, the rest of the money I sent to my sister and it was through her that I managed to invest in bonds and mutual funds (the safest for a long-term investment). At the time my release was inconceivable I just decided to save for “future emergencies.” But last October when I appeared in front of the BPH [Board of Parole Hearings] I decided to hire a private attorney to represent me, and much of this money was used, so I’ll have to start from zero again.

The images you create are striking considering the length of time you’ve been imprisoned. I had not considered the image of a young Mexican male embracing a gang life to be unchanging in style or mentality since the late ‘80s. It’s as though your images present the Mexican gangbanger as iconic. Would you agree? Are your drawings purely based upon the life you once lived in Southern California or is there a modern influence at play either from images you’ve obtained in prison or from communicating with newer inmates?
Yes, I agree and I believe people of different ages can identify with the concept of my images present. Much of my drawings are based in the life I have lived and of those around me. However, yes, I allowed myself a modern influence of dressing style and maybe a car model with the sole purpose of presenting my younger peers with images they could identify with–with something that was familiar and immediate to them.

What prompted me was exactly what you mentioned, I did not wish my art to be mistaken as a glorification of gang-life. It was also a futile attempt of explaining the why of “IT.” The why of this love, but how can you explain the thousands of wasted lives, some dead, some locked up doing life, for something that really makes no sense?

It’s interesting that around the time you were convicted, there was a shift in the effectiveness of the once innovative California Youth Authority. It seems as though your experience with the C.Y.A. was more of a rite of passage that accelerates a youth’s understanding of gang life–like it’s a university system for gangs instead of a juvenile corrections program. Is this an accurate comparison to the flawed institution? What is the “Y.A. mentality” you mention in your biography?
It is an accurate comparison to the flawed institution, and that’s why most of the C.Y.A. institutions that are left are complete lockdown institutions. The system has lost control of its own institutions. And to a young gangbanger it was a rite of passage. It was considered that if you “made it” through C.Y.A., you’ll make it through everything. It was a physical, but more than physical it was a mental game you had to endure, and in C.Y.A., the “weak” were separated from the “tough” real quick. Separated, labeled and outcasted, these “weak” guys had to go through hell. So you had no other choice but to fight your way through, fight and fight and endure ‘til you made it and graduated. And whether you graduated to prison or to the streets, you “made it” and we were proud to be called “Y.A. babies” ‘cause you were tough, ‘cause you fought, ‘cause you represented your neighborhood and your set gratefully, ‘cause you weren’t a punk, ‘cause you were “strong minded,” and you felt respected.

And this perception of yourself and the way you think others think of you gives you a sense of confidence and untouchability that fills you with boldness, fearlessness and a daring spirit to take on the world and this is the Y.A. mentality I talked about. This is the Y.A. mentality these youngsters take back to their neighborhoods, where they are looked up to, and it’s these youngsters that take their gangs and their neighborhoods on their shoulders and it’s a vicious cycle. Most of these youngsters don’t last. They either end up dead or back in prison with a life sentence over their heads, and statistics show that a high percentage of youths paroled from C.Y.A come back. So this is the Y.A mentality I wrote about. 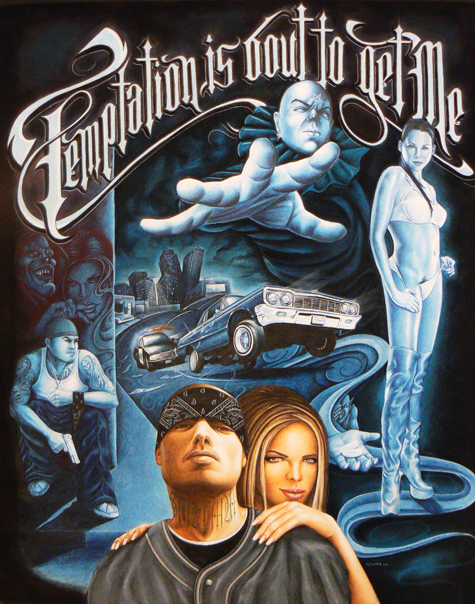 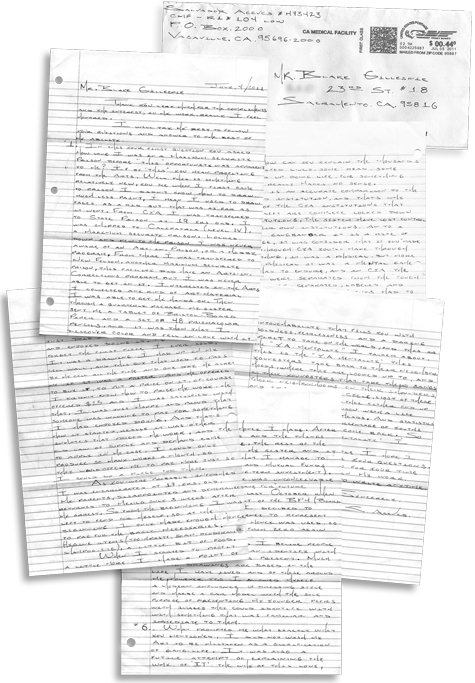 Salvador Aceves is in a medium security prison in Vacaville. While serving time and selling artwork from his cell, Aceves earned a G.E.D., a college A.A. degree in Liberal Arts and an A.S. in Business Management. In January 2011 the California Board of Prison Term set his release to approximately three years from now. Perdition, an exhibit of Aceves’ art is now showing at Spanglish Arte. For more info, go to Shopspanglish.com or call (916) 446-1213.