Exploring the Personal and the Spiritual with Artist Sayako Dairiki

Artist Sayako Dairiki would be a therapist’s easiest patient to dissect. She paints her dreams, which she describes as a mix of her environment and her internal struggle, fueled by experiences from her current life, and possibly a past one.

One of her recent pieces, part of her Inner Landscapes exhibition at Pence Gallery in Davis, depicts a dream in which she sees a town floating at twilight, and she hears a voice say, “That’s the place your souls live.” Silhouettes of arches and points huddle close together against a ghostly bright blue background, almost like a traveler looking upon a lit graveyard.

“When I woke up I did a watercolor quickly to remember, and then did the painting,” Dairiki says of her process for the piece, entitled Town Souls Live.

Dairiki’s themes, colors and subjects hark back to medieval European art, says Pence Gallery director Natalie Nelson in her informational piece about the new exhibit. Nelson says Dairiki’s use of brilliant indigo hues and gold leaf, and her paintings of angels, saints, keyholes and archways, are reminiscent of a hidden, ancient realm. 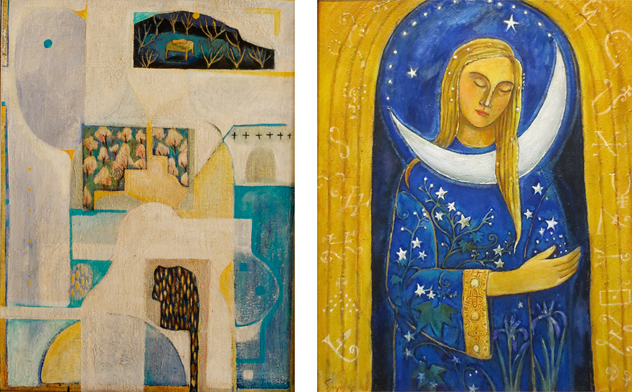 Dairiki says she has only a few explanations for her affinity toward medieval subjects. One reason could be her exploratory trips to Italy with her husband, and the icon paintings in Christianity that always leave an impression. An example is her piece, Night in May, of a robed young woman with straw-colored hair nodding on a crescent moon. The wildflowers on her robes exemplify the rural, natural environment where Dairiki spends most of her time.

Another explanation is her love for the writer Herman Hesse, and particularly the influence of his books The Glass Bead Game and Narcissus and Goldmund, which include medieval, spiritual and self-realization themes.

“They’re not directly following the story but you know when you read a book, you get an image in your mind,” she says. “I try to put those images into my paintings.”

Finally, a third source of inspiration Dairiki calls more fairytale, but has no reason not to believe. She asked a friend, a known psychic, why she has such an interest in medieval subjects, in art and in dream.

“She said I have a past life as a nun in 13th century Northern Italy,” Dairiki says. “That kind of thing is sort of fun to say.”

Not all of Dairiki’s dreams materialize into paintings quickly. She’s still trying to get one on paper that’s been recurring for years, she says. 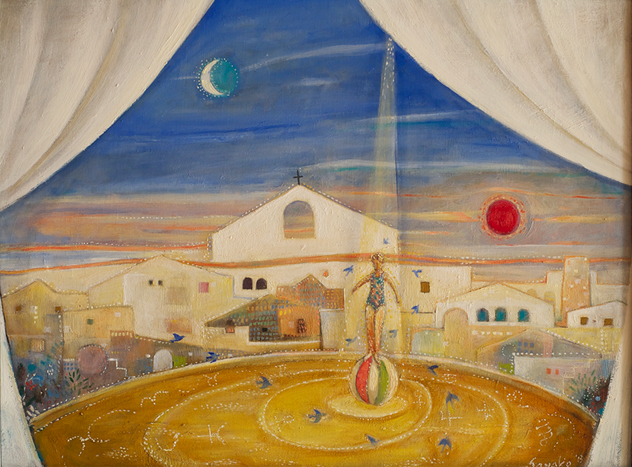 “It’s kind of like aged food, like cheese or wine or whiskey; you have to wait,” she says. “You have to let it sit to let it come out. I do kind of the same thing once in a while. Just don’t rush. Let it sit.”

Patience runs deep in Dairiki. She describes moving to her home in Winters as a struggle at first, after having spent the first 40 years of her life in Fukuoka, Japan; New York City; Los Angeles; and San Francisco.

“It took a while for me to appreciate this isolated beauty,” she says of her home in Winters, a sprawling 40 acres of trees, hills and animals. “I grew up in a big city and never was in the rural countryside. Gradually after 10 years I started really deeply appreciating the beauty of nature. It didn’t happen instantly. Now I like to be here. I took root, like a tree. I am a transplanted tree with roots.” 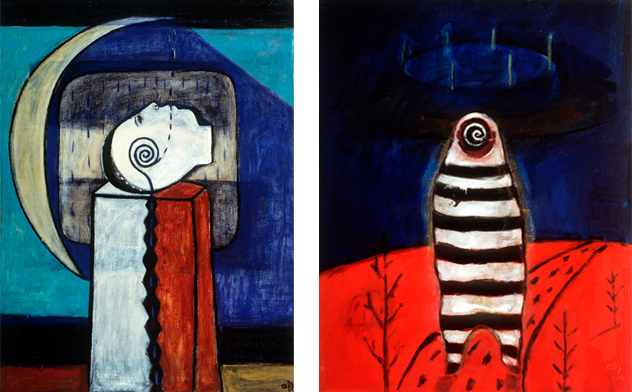 The permanent move to the United States was unintentional, Dairiki says, but when she met the man who later became her husband, she decided to stay, and eventually moved to Winters to live with him and her stepdaughter.

Dairiki spends most of her day at home while her husband, an architect with whom she occasionally does projects like public art, is in town.

“So, I need to deal with my environment,” she says. “When your life is in a difficult place for many reasons, you have to deal with it right? My painting is a really good tool for me to deal with those life issues.”

For Dairiki, those issues over the years have included “living in a different culture, living in a new environment or having a new family.”

“I raised my stepdaughter, for example. Now she is 24 and is fine but when she was a teenager it wasn’t that easy,” Dairiki laughs. “Painting is a really great tool to see myself, to detach and see what’s really going on. The process of painting—mixing paints, grabbing brushes—is very healing for me. It helps me face difficulties visually. Sometimes you have nightmares, but expressing those things and having deep commitment to my painting was great for my life.”

Prior to her permanent move, Dairiki had come to the United States in the late 1970s, around age 20, as a struggling artist with her struggling photographer boyfriend, both trying to make it in Los Angeles and New York.

“He did really cool photography but it was just two young people trying to be artists, and it was tough,” she recalls. “I had a lot of dreams and it was good, but we stayed less than two years.”

Dairiki came back to the United States from Japan in 1994, hoping to see more of the country. She moved to San Francisco and worked at a ceramics studio in Haight Ashbury, and was inspired by her new city surroundings.

Her art, she says, changes given what’s going on in her life and where she is, but it stays the same in the sense that it is always what she dreams in that time and space.

“When I was in San Francisco I was not doing rural or nature,” she notes. “It’s a big city with interesting people and so my art was different. But I always painted the dream world, even [when I lived] in Japan.”

Lately, she is trying more abstract painting, taking her dreams to another level. But, she adds, her real life still offers plenty of inspiration.

One of the most romantic, touching pieces of the Pence exhibit is Moon Night Walk. I had to ask—was that real or dream? Who is in the painting?

“My husband and I take a walk, not every night, but often after dinner, and our neighbor has a walnut orchard we walk by,” she explains shyly. “Sometimes we just enjoy the beautiful full moon and talk about the day. That’s my real experience.”

Dairiki spoke with Submerge the night her exhibit opened. She held an artist talk at Pence Gallery Jan. 17. She says she enjoys talking to people who see her work. 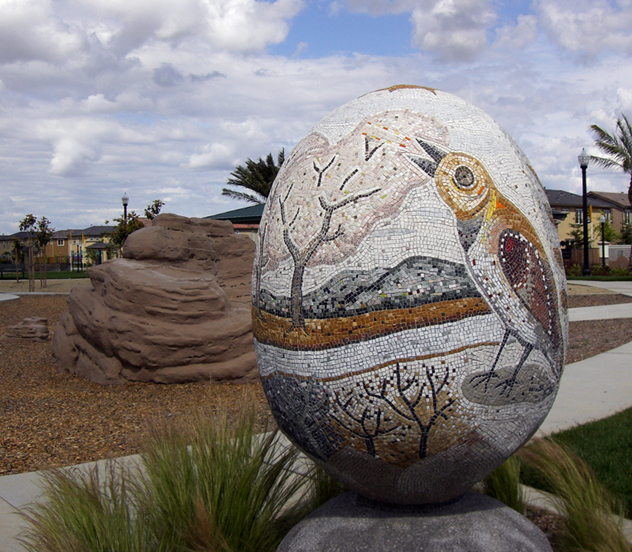 Take a glimpse into Sayako Dairiki’s dream world through her exhibition Inner Landscapes at Pence Gallery, located at 212 D Street in downtown Davis, through Feb. 27, 2016. Find out more at Pencegallery.org.