Through thick and thin, Shaun Burner continues to bring his art to the masses

To the average passerby, the intersection of C and 14th streets in Sacramento might have come off as exceptionally eerie in the final few hours of Oct. 30, 2015, right before Halloween officially got underway.

Surrounded by a small, abandoned industrial park on one side with a spread of Victorian-style homes in the Mansion Flats neighborhood of downtown sitting adjacent to the other, not a single soul could be spotted in any direction as the night crept on toward the nine o’clock hour.

About 20 yards down the block, however, a barbed wire-lined gate had been pulled wide open, leaving a clear entrance to the loading dock area of one the nearby properties. 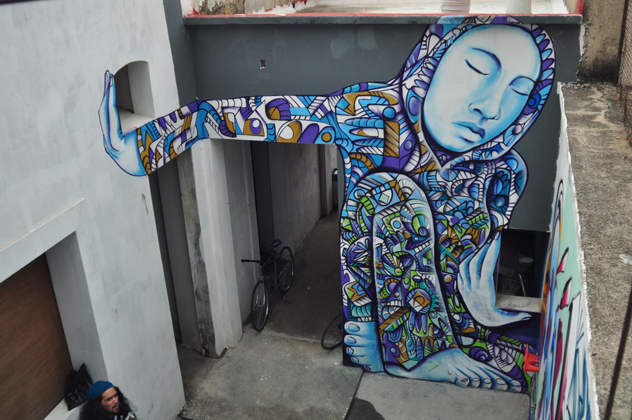 There were people inside, and they sure seemed busy enough to make up for the near-dead silence just outside the barricade-like wall separating them from the road.

As it turns out, two different teams had been hard at work at 1425 C Street (formerly part of Hangar Studios): one setting up a stage in the lower-level courtyard, another building a set inside the east side warehouse.

Among the dozen or so indoor crew members was local artist Shaun Burner, bustling back and forth between a jumbo-sized horse’s head and an even bigger headless horseman towering behind it—both of which were still being worked on.

Burner had been approached by TBD Fest founders Michael Hargis and Clay Nutting about a month earlier to help create the artwork for their upcoming Halloween show, slated to feature DJs Slow Magic and Com Truise.

Just one day away from its doors opening to the public, Burner appeared surprisingly at ease during a cigarette break, saying he was confident the project would be finished in time.

“I feel like we’re on pace,” Burner said, adding that he was also up against another deadline designing signage for the new B-Side bar opening on S Street. “We got the meat of the structure up; now it’s just kind of detail work. I think we’re at a good place.”

Burner said he felt he had slowly taken on the role of artistic director and project manager over past few weeks, delegating tasks to volunteers that had often fluctuated between four and ten on any given day. 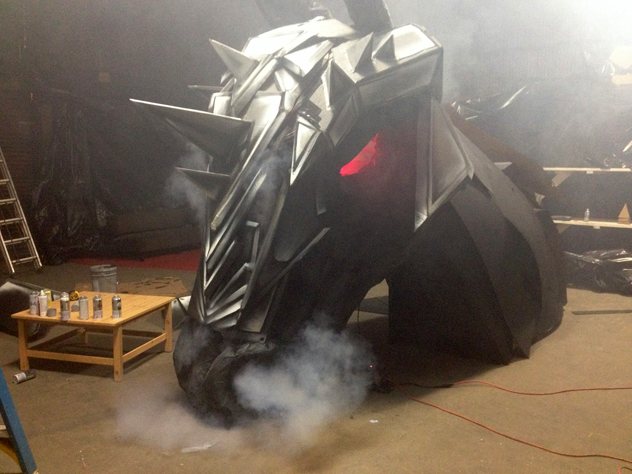 While he said he and fellow artist Franceska Gamez had mostly built, chicken-wired, papier-mached and painted a lot of the main set pieces for the Sleepy Hollow-themed backdrop, others had helped bring more subtle elements of the concept to life—like the giant tree up against the north wall of the warehouse, which had gnarled branches extending throughout the ceiling.

With time running out, Burner said he was grateful for whatever help he could get.

“It’s good having other creative weirdos to kind of help make this happen,” he explained.

Growing up in Rancho Cordova and then traveling the world to spread art with different collectives through much of the ‘00s, Burner said he considered himself to be one of those creative weirdos as well—albeit one that had been working professionally almost his entire life.

After moving downtown nearly 15 years ago and being introduced to mural painting by his friend Mike Rodriguez, Burner gradually became involved in many community-based projects within the area, including one where he helped complete a mural for the Sacramento Chinese Community Service Center. 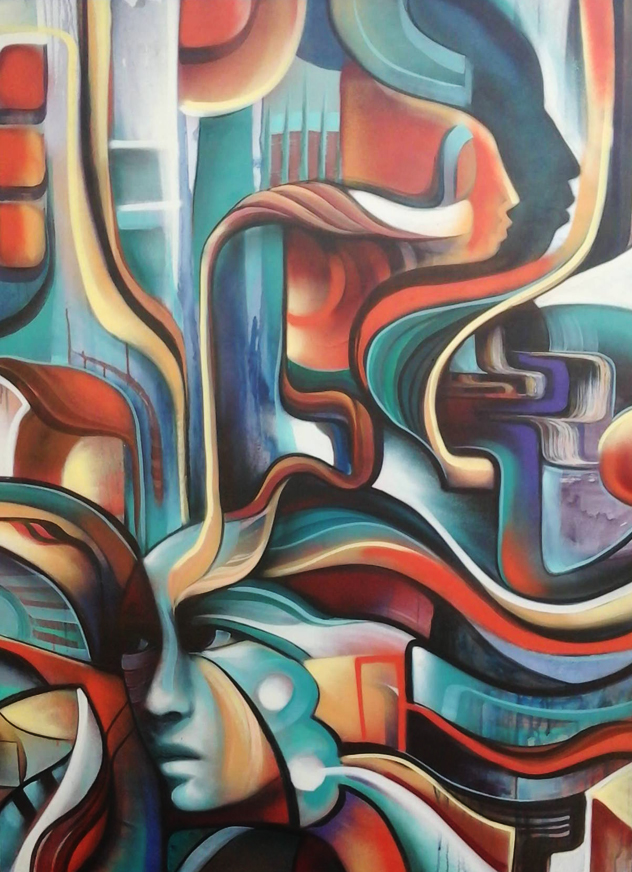 Before long, he had joined Sacramento’s Sol Collective and was eventually invited to attend an arts tour of Puerto Rico with the group.

“We were traveling with about 30 people—musicians, poets, artists,” Burner said. “We were doing workshops; we were painting murals for the community. And that’s where I met some members of Trust Your Struggle,” an art collective based out of New York and the Bay Area.

Burner says he decided to try his hand at living amongst his East Coast collective counterparts upon returning from the Puerto Rico trip in 2005. During his three-year New York stint, he ended up working extensively in film production and set design, and even embarked on another mural campaign—only this time around the United States.

The domestic tour was dubbed “Trust Your Hustle,” Burner said, as he and fellow painters and activists traveled to Atlanta, Austin, San Francisco and New Orleans, among other cities, to help communities build “from the ground up” with artwork and, at times, actual infrastructure if needed. 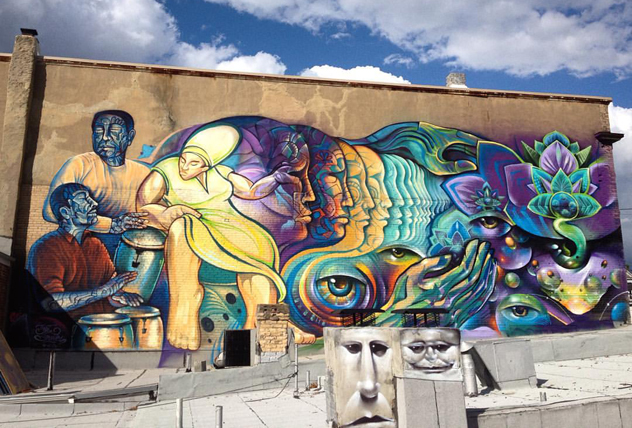 It wasn’t until he and a couple other members extended the tour to Los Angeles that Burner found himself evaluating his financial situation.

“We were super broke,” Burner said about his arrival in L.A. “At one point, we did this mural where we like traded for food … We were like trading for cheeseburgers.”

Burner stayed with family in Southern California for about two years before he started seeing more mural work coming his way regularly. After entrenching himself in the film industry in New York for so long, Burner found himself circling back to his first true love in painting.

According to his website, Burner was involved in seven separate murals in the Los Angeles area between 2008 and 2009, on top of the other 18 murals he participated in during the same time period.

His site doesn’t show any work of past 2010, which was around the time he opted to move back home to Sacramento after more than five years of being away. 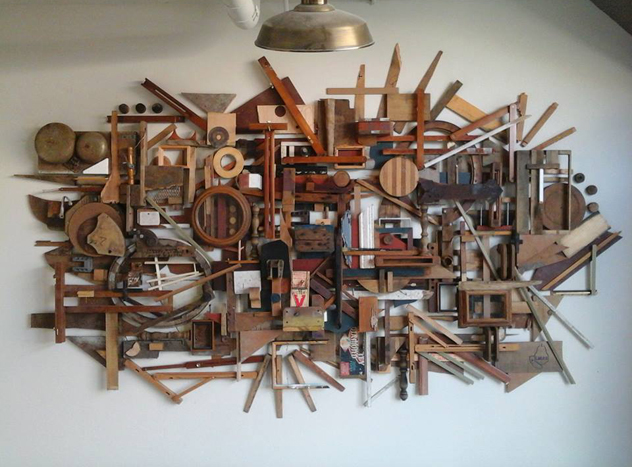 “My nieces are growing up, and I want them to know me,” Burner said, explaining one of the reasons for his move to the Capital City. “I didn’t want to be away and just be the uncle who came in every now and then. So just come and be around my fam, and then build some rad shit in this city.”

Since his return, Burner says paid commissions have sometimes been hit or miss, but that he tries to not let that discourage him.

“I mean, it’s feast or famine. You know what I mean?” Burner says. “It’s kind of a funny thing—it fluctuates. Sometimes I will have all these jobs come at once, and I have to take them on and just get them done, and I’ll be working like crazy. And then other times it thins out a little bit.”

Either way, though, money hasn’t ever stopped him from continuing to paint in Sacramento, whether he’s commissioned or not. And when the rainy season hits, he adds, and the conditions aren’t the best for mural work, “That’s a good time to leave town and go to another place where it is.”

Aside from his constant flow of mural paintings, Burner also co-manages an art gallery called 1810, located inside the Warehouse Artist Lofts off of 12th and R streets.

Open only during the first Fridays and second Saturdays of each month, Burner says he’d like to start running more regular hours once he can find someone to run the establishment on a consistent basis. The gallery, he says, has a lot of potential to showcase local talent and to possibly bring a different flavor to the art scene in Sacramento that’s possibly not getting exposure at the moment. 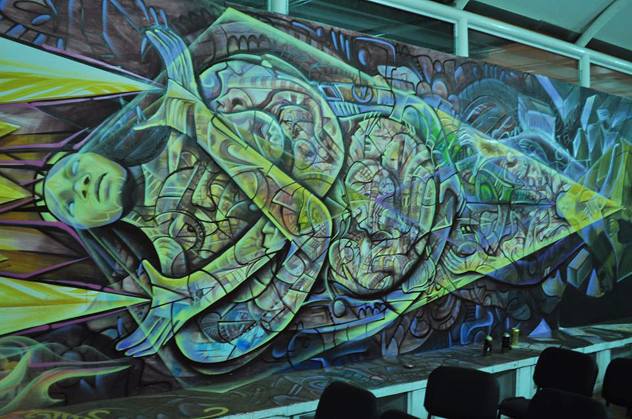 “Even with that thing,” Burner points out, “selling art can be a hard gig, you know? So it’s not like we’re making money off of that. But it’s more about just doing it and just trying to bring cool stuff to Sacramento.”

In the end, that’s really all Burner really wants: bringing more art to wherever it’s needed.

“It’s such an amazing way to communicate with people and just brighten up a city and bring some culture to a city and make you feel proud about where you’re at,” he says.

“I’ve made amazing connections with people through art. I’ve painted with people that don’t even speak the same language as me. And we’ve hung out and we’ve been able to connect and make beautiful work together.”

While he says he would eventually like to see more consistent commissions so he could one day support a family just on painting alone, Burner acknowledged that he works best under pressure—time and again finding himself able to rise to the occasion when things aren’t so easy.

“I feel like you can get really comfortable sometimes and not make things happen,” Burner says. “But when push comes to shove or you’re under the gun, you can make amazing things happen.”

That’s why he enjoys work like the Halloween set that he finally finished over the next 24 hours.

“I’m like, ‘Oh yeah, we got work to do. But we’re gonna get this shit done, because we need to.’ There’s no time to second guess it.” 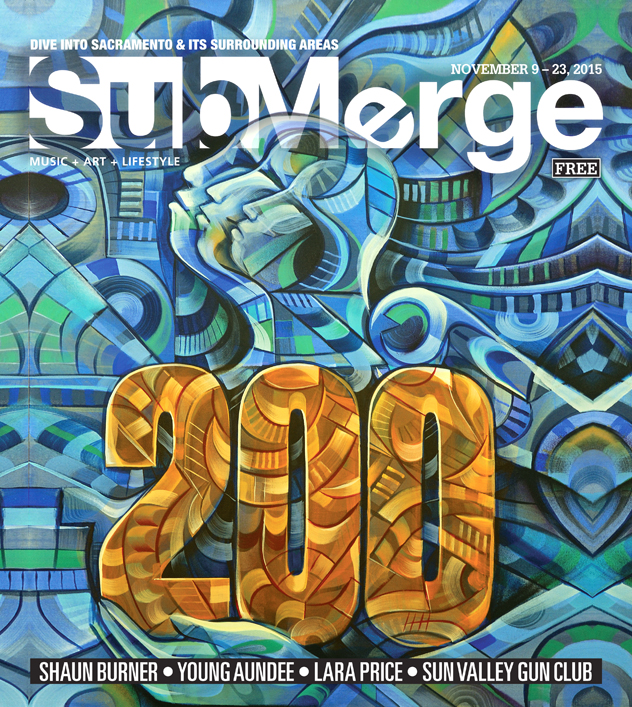 Submerge would like to thank Shaun Burner for providing his rad artwork for the cover of our 200th issue! For more on Shaun and his 1810 Gallery, check online at Facebook.com/shaunburner916, Shaunburner.wordpress.com or 1810arts.com.