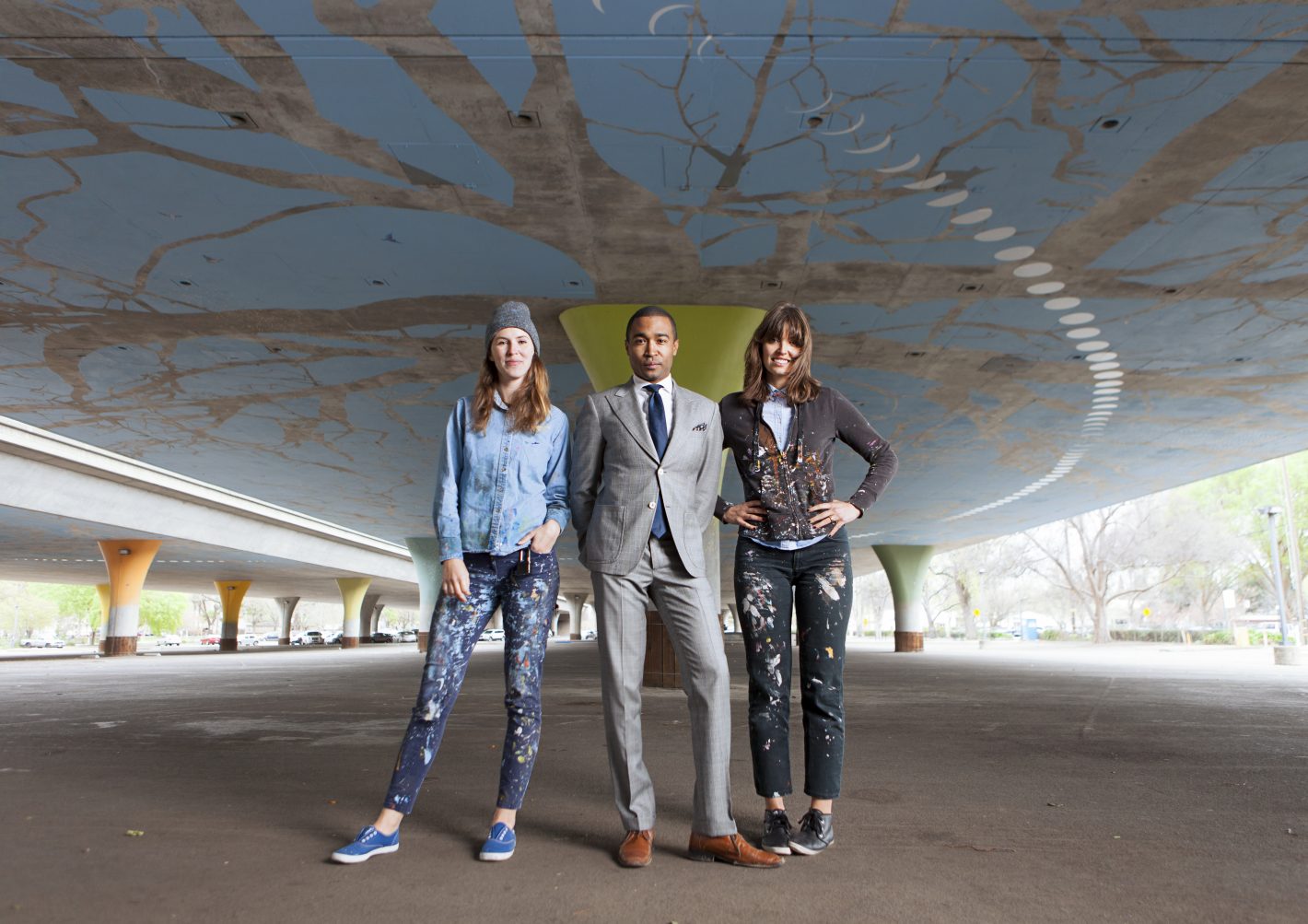 Dynamic duos are usually associated with comic books or television superheroes that join forces in order to save the day; the Wonder Twins and Saturday Night Live’s Ace and Gary instantly come to mind. Typically, these duos eke out an existence lurking in the shadows in some metropolitan city where they carry out amazing acts of heroism. Sacramento has its own version of a heroic twosome, but instead of battling bad guys, muralists Sofia Lacin and Hennessy Christophel swoop in with their paint brushes and vibrant hues to transform outdoor spaces from the outside in.

The two artists met while attending Mira Loma High School and reconnected shortly after college, eventually forming their own design business LC Studio Tutto and embarking on their first large-scale art project when they were invited to be a part of the 1409 R Street block transformation.

“That was kind of our first taste of being a part of something that totally transformed a place and as we started working in public. We got kind of hooked on that feeling of being able to create things that were really having an impact on people and touching people’s daily lives and experiences,” Christophel explains. 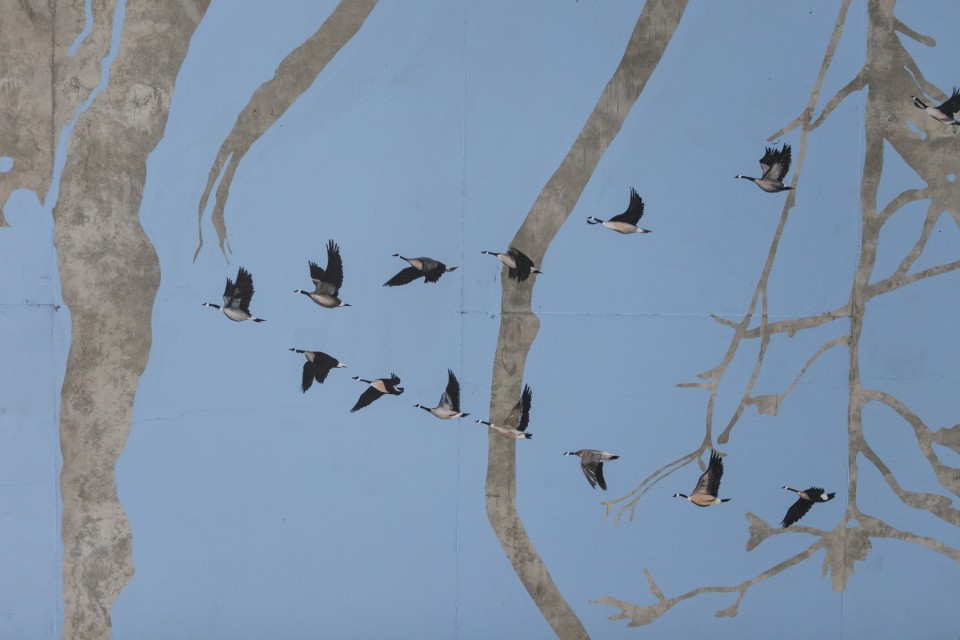 Lacin and Christophel are driven by this concept of connecting their work with the daily lives of those who move through the city. The art duo’s creativity thrives in urban spaces that have been either forgotten or left to wither in blight by reimagining and enriching each space through color and form to uncover the beauty and identity that wasn’t there before. Each credit their varied artistic backgrounds as the reason why their partnership works so well.

“Sofia and I feel like we have this great balance that happens between us,” Christophel says. “I have a very kind of micro perspective, and she has a kind of bigger picture perspective and is a lot more focused on color, so I think they’re very different backgrounds that we have, different skills, but they complement each other very well.”

Lately, the subject of public art in Sacramento has been at the forefront of just about every discussion involving the future of the city—from the grumblings over the millions of dollars being thrown in the direction of artist Jeff Koons to erect an artist offering to complement the highly contentious new downtown arena, to the simple discussion of what role should public art play in this cultural renaissance of Sacramento. Lacin and Hennessy’s latest creative undertaking, the Bright Underbelly project, serves as a reminder of why public art is vital to a city’s identity and character.

“The most powerful part of public art is that the space is not curated it’s out in the open, anyone can pass through,” Lacin says. “I think if you really pay attention to the site and the community, you are able to add elements in the design that resonate with anyone in that community. It becomes like this surprising little mirror of that culture, and I think that’s one of my favorite things. It’s out there in the open for anyone to experience.”

As the two celebrate a decade of working together, this dynamic duo have 70 installations under their belts that include the We’re All In It Together mural on Midtown’s BloodSource building; a mural and sculptural installation for The Mill at Broadway, a new urban housing community in Sacramento; as well as Hanging Mist an installation made up of 72 perforated aluminum panels painted in soft layers of color, forming two walls of the inner courtyard of Warehouse Artists Lofts. But it’s their ability to create a career out of their shared artistic passion that the two are really proud of.

“I was also lucky enough to grow up with creative parents, they run a business together, a professional photography studio,” Lacin explains. “So I kind of grew up with this, not only this model of creativity and how that is a valuable thing to contribute to the world but also, how do you make that your job, your full-time job. So, I have kind of done my best to make art a career for us and I just believe that I could never do anything else.”

While Lacin and Christophel are no strangers to creating larger-than-life art installations—they’re responsible for adorning a 4 million-gallon water tower in Davis they call Same Sun, which features shadows cast by sculptures moving against a radiant, golden-hued background—Bright Underbelly, a mural covering 70,000 square-feet and celebrating the seasons will hover above the city’s largest farmer’s market under the Highway 50 overpass at Eighth and W streets. It will be the largest project the twosome have tackled to date. After five months of lying on scissor lifts, kicking back on yellow lawn chairs procured from the streets of Midtown, it’s most certainly their most backbreaking project too.

“We’ve been in these chairs, lying down like freaks for five months under this freeway,” Lacin chuckles. “One of the weirdest parts about it, I couldn’t believe how exhausted I was. I was like ‘I’m lying down; this is going to be cool. I’m not going to be tired, I’m going to go party after.’ It was exhausting like driving for 12 hours is. You’re very focused, and it’s also a very isolated experience. To be two inches from the belly of the freeway that trembles as big rigs drive overhead.” 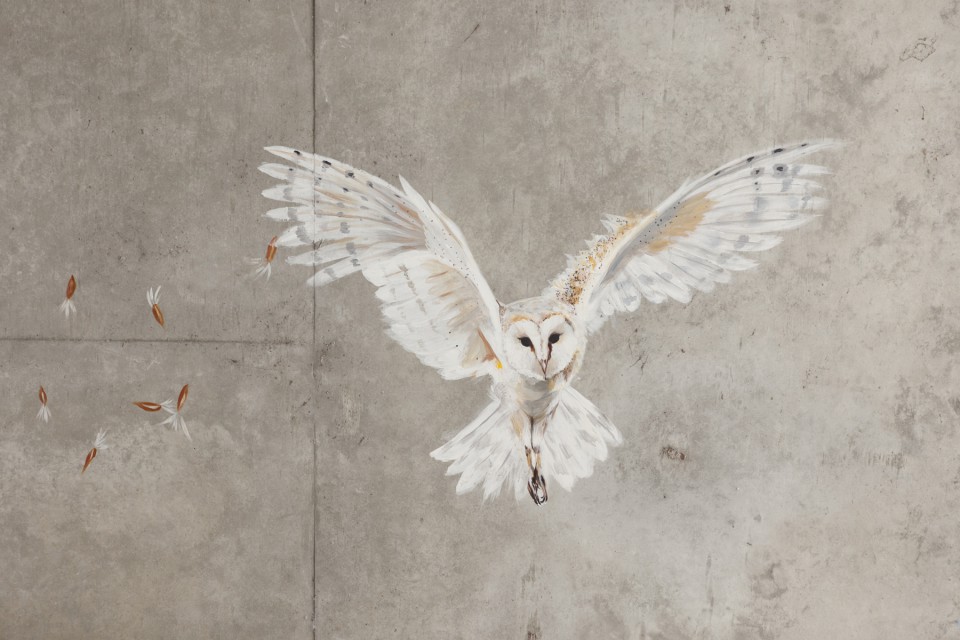 The inspiration for the project came from Bright Underbelly project manager Tre Borden after a trip to Buenos Aires, Argentina. Borden, who is no stranger to the arts community after managing projects at Exhibit S gallery in the former Downtown Plaza and running the Flywheel artist incubator in 2012, says that this project is just what the community needs.

“I saw this pedestrian bridge that had been beautifully muraled as a way to kind of create a gateway into the arts and culture district and I thought, ‘Wow, we have so much stuff like that here that’s kind of just languishing so why don’t we do that?’” Borden explains. “We thought to prove our point, let’s pick the place that’s most visible where our farm-to-fork identity was really born and it’s also a really great location in terms of how it connects so many different communities.”

When the ribbon cutting ceremony takes place March 17, the underbelly of the freeway will have undergone a complete transformation celebrating the natural world that surrounds us, including a shimmering rendering of the lunar cycle. The artists say that the project wasn’t erected on an island, but was forged out of a true collaboration between the artists, city stakeholders and, most importantly Borden says, the executives at the California Department of Transportation.

“I love that there’s all this activity above. In the summertime, the market has like 10,000 people, there’s all this activity below and then the mural exists in this kind of quiet space in between,” Christsophel says. “You don’t look at it so much as you move through it and experience it. We decided we wanted to have it be this kind of journey through the seasons that people experience as they walk through because the seasonality of the agriculture, the produce that fills the market every Sunday connecting that to the big picture of these natural cycles that we live in, that was our vision for the space.”

In true dynamic duo fashion, Lacin and Christophel seek to make an impact on the world around them. They thrive in collaborative environments by creating large-scale public art installations that bring life and identity into spaces that would otherwise go unnoticed to inspire a connection between people and their surroundings.

“I love the ability to go into any environment and bring life through color, I’m inspired by that idea and I strive to do that,” Lacin says.

You’ll have multiple opportunities to enjoy the unveiling of Lacin and Christophel’s new mural: A ribbon cutting ceremony on March 17 from 9–10 a.m. (free); from 11 a.m.–2 p.m. on March 19, Bright Underbelly will host a family-friendly affair featuring food trucks, a scavenger hunt and a lecture from Lacin and Christophel (also free); Spring Awakening: An Art and Food Experience will take place on March 20 from 5–9 p.m. and will allow you to dine beneath the mural and sample a limited edition Bright Underbelly beer from New Helvetia. The latter event will also feature live music and a special menu created by Chef Patrick Mulvaney. For more info, go to Brightunderbelly.com