The Man Behind the Metal

Not many people can find joy in stepping on a fresh piece of gum. The moment it hits your shoe it suddenly turns into an endless string that seemingly can wrap around your entire body. And no matter how much you wipe the pink bundle of teeth marks on the curb, it lingers on the bottom of your heel. But there might be one person who can find some joy in a gum catastrophe.

“Look at the way that thing pulls apart, it’s awesome. Who would have thought that only one cubic centimeter of chewing gum could stretch about three feet long?” Christian Cinder asked with excitement, while sitting inside Broadacre Coffee.

Finding the simple joys in life has led Cinder to become a professional cartoon surrealist but with a fun twist. He makes you question the stereotypical sci-fi robots that are out to destroy human life and replaces them with fun-loving robots that seem huggable.

“The work is happy because there is happiness,” Cinder said. “Maybe like a Men in Black kind of scenario; the world might be collapsing all around them, but they are going to have the best time they can.”

His current exhibit at the MAIYA gallery in downtown Sacramento, March of the Robots, displays some of Cinder’s (who signs his name C!nder) most recent collections of art pieces that are ready to be admired. He credits his creative inspiration to growing up in the ‘70s, watching Star Trek, reading Mad Magazine and comic books, and the popular ‘60s artist Ed Roth (known for creating the Rat Fink icon).

Whether you are a science fiction nerd, art fanatic or love cartoons, Cinder creates pieces that everyone can enjoy. His art work is bright, imaginative and fun. Cinder likes to portray robots having fun in their environments, smiling and exploring their world with curiosity. One of his pieces shows a red robot sitting and looking very content in a flowery meadow. But not all of this work is happy and easygoing. One piece called Night of the Tinkerbot shows a scared robot running away from other rusty robots who are trying to take his parts. 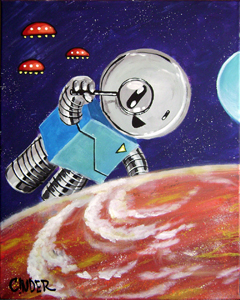 “The robots can be destructive but so can 5-year-olds,” he admitted.

“When I pick the colors for my subjects, I tint and tone everything according to where they are on the background and the foreground,” he said. “So that’s just the basic concept of color theory. That cool colors will recede and warmer colors will come forward.”

While visiting the MAIYA Gallery, Cinder would walk around with 3-D glasses trying to see if the other artwork on display had the same effect, which made onlookers take a second glance, said Kelly Truscott, owner of MAIYA Gallery. Truscott said that everyone has taken an interest in Cinder’s art, from 10-year-olds to serious art collectors. But Cinder likes to call his fan base the “12-year-old adult.”

“The person who has the energy and interest of a pre-teen and can enjoy life that way but at the same time has the education and experience to appreciate the nuances,” he said. “So anybody who likes a Disney film or Don Bluth animation, I would hope would like my work as well.”

The ideas behind the animation all start with pencil sketches in his worn-out sketchbook. The sticker collage on the front cover of this sketchbook, which includes, In-N-Out Burger, San Diego Comic-Con, Santa Cruz Beach Boardwalk and Space Invaders, can easily give away what he loves most. But once the sketchbook is opened, a new world comes to life with Intergalactic Police, Alien Internet and frolicking robots. Cinder can find robots everywhere. One of his drawings is based on a man who was picking up cans on the Santa Cruz Beach and wearing a medical mask with thick gloves. After Cinder saw him, he drew him as a robot on the beach. 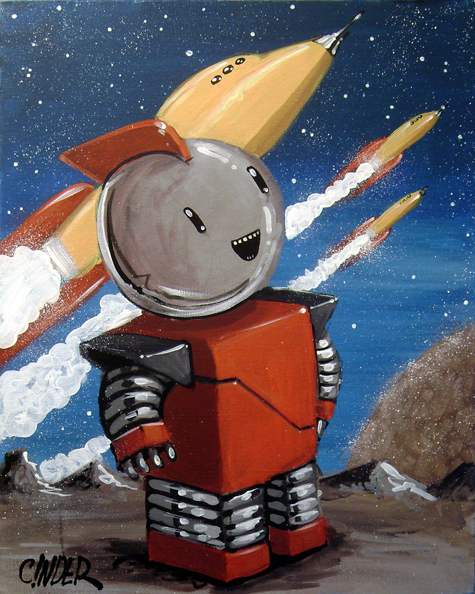 His sketch work shows all the technicalities of creating a robot and he does not allow himself to make any edits in his sketchbook. The process of developing a new robot style, which he calls Cinderbots, is a serious task. He takes multiple styles of robots and gives them a name and purpose in each painting, including the Alpha (single box or geometric shape), the Cinderbots (a more formed robot) and the Hakos (cardboard structure characters).

“I think I get the most fun out of the Alphas, he’s been my longest standing character, he gets into the most mischief,” Cinder said. “In the paintings he discovers the most about his world and the Cinderbots act like a supporting crew. I think the Alphabot is pretty cool, Alpha 1 is his name. He just goes by Al.”

And Al can come at an affordable price. Cinder likes to keep this work within reach for everyone. In the past he was known for making “insane cinder prices” where he would only charge $40 to $60 for a large painting. A former art buyer once asked him if they could pay half in cash and the other half would be a trade in CDs, and of course Cinder agreed. Those days it was easy to mark a big painting for cheap because he earned other income but now he has to be more careful with pricing.

Cinder has been making his art accessible for everyone for the past seven years and has created more than 500 paintings. He learned art education through community college courses, spending many hours in a library and through other artists that he knew in the community. Cinder started to take art more seriously when he would sketch portraits of his co-workers’ pets and babies. Now he somehow finds the time to balance multiple art projects at once and spend time with his wife and three children, who often take part in titling his art. 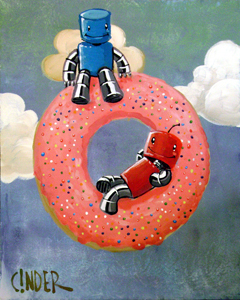 “The paintings on the wall complement my family life,” he said. “I am a father, a husband and a best friend to all of them.”

One of his biggest inspirations came from his daughter, and while they were eating donuts she said, “Mini donut, mini donut, for a mini robot!” This idea sparked Cinder to paint doughnut-hole squids, robots chasing doughnuts and create tiny sculptures perfectly matched for Doughbot, the delicious doughnut cafÃ©. Cinder’s art can be seen at Doughbot, MAIYA Gallery, and on “anything else that can hold paint,” including custom end tables, bicycle helmets, ukuleles, bongo drums, guitar cases, skateboards, cars (interiors and exteriors), pinstriping, leather jackets and denim jeans. He also does modeling for the war miniature gaming community and table top battles. He creates the scenery and terrain for tiny armies to battle on with mountains, forests, valleys and houses.

This artist, sculptor, creator, Sacramento native and all-around happy guy is excited to share his thoughts and stories with everyone in the city. “Being in the physical presence of all the work you’ve already done, you can see what you were thinking. It’s like reading back through your journal but on a visual level, because every piece that I make is in its own moment, its own story,” he said.

See Cinder’s work at Maiya Gallery. His exhibit, March of the Robots, also features the works of Marissa “Nurse Squeeky” Goldberg, Dwight Head, Mark Lifvendahl and Mark Harm Niemeyer. Maiya Gallery is located at 2220 J Street, Suite I, and is open Wednesday through Saturday from 11 a.m. to 7 p.m.