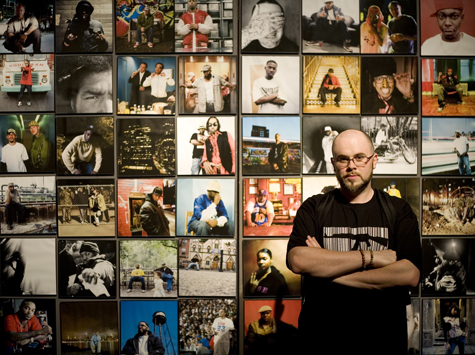 Born and raised in New York amidst hip-hop’s golden era, photographer Trevor Traynor is a product of the culture. Combining his love for the music with his artistic eye, Traynor has built a career for himself documenting the artists in their rawest form. His latest installment, I Shoot People, consists of 200 photos of some of hip-hop’s finest, including Nas and E-40, capturing unforgettable moments from a crowd-surfing Method Man to David Banner lost in a sea of fans. From studio shots to live action, Traynor manages to catch the true character of each artist. His images are clean, sharp, and beaming with energy. Sacramento is the last stop on his five-city tour and will undoubtedly be the jewel among all the oil paintings depicting the downtown bridge. For more information and a glimpse into what the show has to offer check out www.ishooteverything.com.

How long have you been making a living off of photography?
I’ve been shooting for about 14 years. I made my first sale and had my first gig at 19, and have been shooting commercial since 2004. I quit my full-time job three years ago.

And all your work now is on a freelance basis? Is there a company you operate under?
It’s all freelance; Trevor Traynor Photography. I started a blog about two years ago, and I came up with and trademarked the gun logo with a camera lens as the barrel for the blog. That logo started out as a sticker, then T-Shirts and now a five-city tour.

So is the show a culmination of the past two years then?
Nah, I actually went to University of Colorado, Boulder, for photography about six years ago. I started shooting hip-hop then, but it was always a part of my life, and it was in my family. I used to rap, my older brother was a producer and my youngest brother had a label.

So in that time you started taking pictures, documenting the music and culture?
Yeah, that’s how it started. I would take pictures of people in exchange for a 16-bar verse for my brother’s albums. The first rapper I shot was AG from D.I.T.C., then Truth Enola and then Dres of Black Sheep. I kept pushing with pictures, my brother ended up in the New York Fire Department, but those were good times. My pops was always a sort of Renaissance man though and always took slides, so the camera was always there for me.

How would you describe your style as a photographer?
Organized raw color. Raw organization.

Can you break it down further and explain how each of those words pertains to your work?
I would say raw for the content, the minimal post production and just the minimal floss. Organized is for my subconscious addiction to framing. I see frames all day. I have a friend who draws super detailed lines and creations. He sees in shapes. I have another friend who draws cartoons for Disney, he sees people in cartoon form. Everything I see is in frames. I like to balance color with a minimal mind puzzle style, like plucking pieces out of the air and building a brain frame. I think it shows in the wild style presentation of I Shoot People. Just the way I hang the 200 photos, they’re all different sizes and colors.

I’ve heard you use the term “wild style” in previous interviews. Can you explain the significance of the sort of controlled/highly organized presentation which, like you said, is all sizes and shapes and how it all comes together?
Wild style is like no levels and no blueprint to work from. I start with one piece and assemble the puzzle according to size, color, angle. Each show was a different maze and had a different flow.

So the presentation is just as much the art as the photos are?
Oh definitely, for me at least.

You feature a lot of rappers, but they’re not all you shoot. What are some of the differences you’ve noticed shooting a rapper opposed to a regular person?
Well you have your divas and just busy bees.

As you get deeper into your career what have you learned about photography and yourself?
As I get older I’ve realized that having control is more of an illusion, and that letting go and living is the essence of photography. I will learn technical aspects ’til I die, but with photography I have learned that memory is minimal and these prints are a visual memento of my life. Photography is truly an organic art form, and without it we would miss a lot.