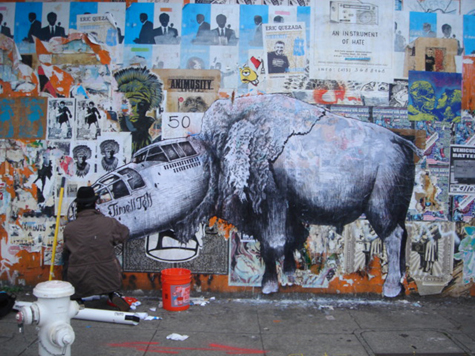 Oakland artist Jesse Hazelip’s mixed-media artwork has captivated viewers throughout the Bay Area and beyond, in locations such as Los Angeles’s Thinkspace and Abacot Gallery and The Space in Chico, Calif., to name a few. The political commentary in Hazelip’s art is not subtle. Many of his pieces illustrate the stark contrast between the destructive nature of mankind and the peaceful beauty of the natural world. The results are unsettling: A buffalo’s body attached to the nose of a fighter plane, or a heron’s body with the head of a deadly weapon, flying across a geometric sky.

Hazelip’s art is evocative of a wall covered in colorful graffiti—pointing to his origins as a graffiti artist. “I used to be really deep into graffiti, and I would always try to paint something different each time I went out,” he explains. As you can probably imagine, this got him into some trouble during school. The rebellious teenager inside of him might be tamer now, but certainly isn’t absent. “I am currently trying to refine my aesthetic into a cohesive body of work, and create a visual language of my own,” he says. 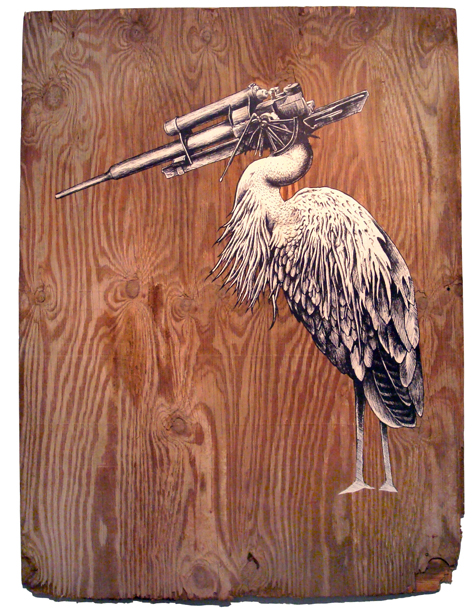 True to his roots as a graffiti artist, Hazelip prefers to show his work where it can attract the most attention. “My favorite place to display my work is on the street, in public domain, in hopes of creating dialog amongst the Proles,” he says. For example, this past February one of his creations could be found on the wall of a building in the Mission District of San Francisco.

While these graffiti-like pieces give the illusion of spontaneity, in actuality he has put considerable effort into every finished piece. “I collect reference and read about potential paths I want to explore. I do tons of small rough drafts, and sometimes large fully rendered drafts,” Hazelip explains. “But the drawing is always the most time consuming aspect of any of my work.”

Considering that most pieces are literally larger than life, the finished products are impressive. “Scale is very important to me, and the gravity of larger pieces has always resounded with me. I like to make things life-size or larger, something you have to stand back from to fully appreciate, but also draws you in to inspect the detail,” he says.

These large-scale pieces are fitting for his subject matter. His themes generally include social issues that he feels need to be addressed, such as war. He uses a variety of mediums to get his message across, and is currently working with everything from drawing and painting to print and mixed media. “I love drawing with practically anything that makes a mark, and the same with painting,” he says. 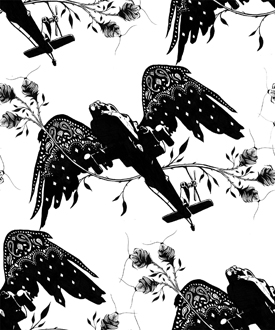 Hazelip received his BFA from Art Center College of Design, and for now, he pays the bills as a commercial illustrator. Someday, he hopes that he can devote himself completely to his own artwork, stating that his goal is “making my art for a living, not having to answer to an art director, having complete artistic freedom.” He is optimistic that although art may not be the easiest career path, it’s the right path for him. “Art is a rough trade, especially in today’s economy, but that’s part of the struggle,” he says. “It’s really hard work, and artists get exploited a lot, but it’s all a learning experience.”

Hazelip’s most recent collection is entitled Tempest Turner, and is aptly named after a WWII bomber plane. In these pieces, Hazelip continues to explore the dark contrast between mankind and the natural world, questioning whether man will ever learn from the mistakes of the past. This collection will include a variety of mediums, such as silkscreen prints, acrylic on wood, ink on paper and mixed media on found wood.

His hopes for his art are far-reaching, and he says he has several dream galleries in large cities like San Francisco, Los Angeles and New York where he would love to show his work—as well as taking the creativity with him and traveling overseas. But no matter how famous he becomes, he retains the humble goal of using art as a communication vessel: “I feel that I have a responsibility as an artist to voice concern with my craft, to seize any platform I can and use it for a greater good.” 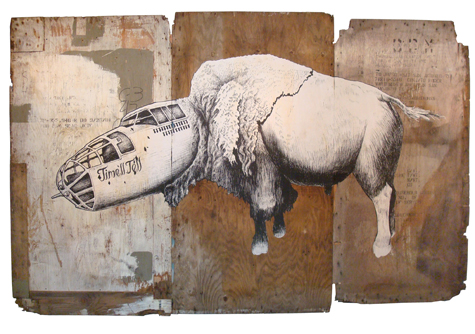 Going to Second Saturday? Jesse Hazelip’s new collection, Tempest Turner, will be shown at Space07, located at 1421 R. Street, Sacramento. The collection will be shown from June 13 through Aug. 9. You can also check out his work online: www.jessehazelip.com and jessehazelip.blogspot.com.