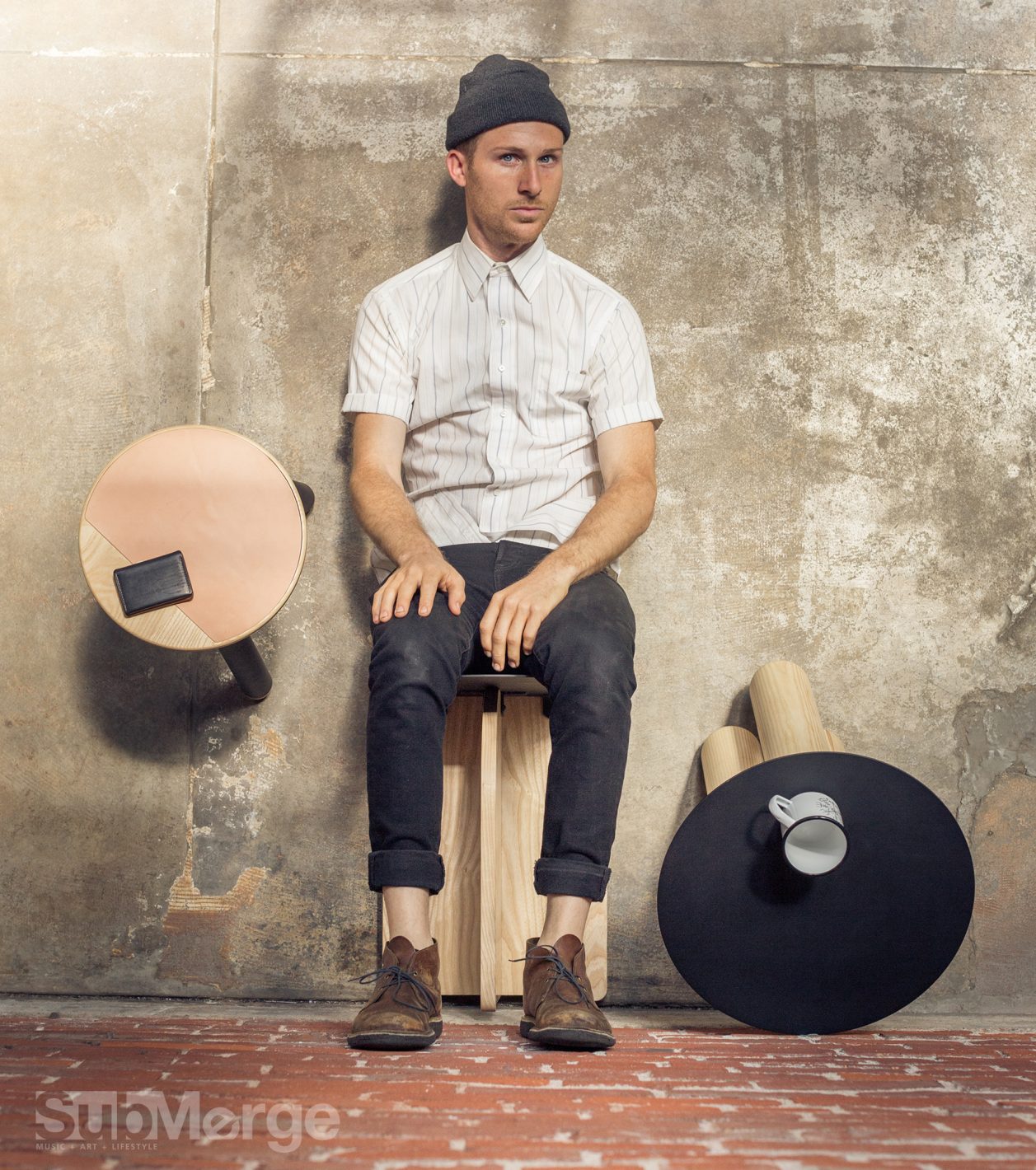 Trent Dean admits that he “floated around” his entire life.

“Didn’t have a degree, didn’t have a direction,” he explains. “I hated the holidays when people would ask, ‘What are you doing with your life?’”

One constant in Dean’s life, though, was making things—whether helping his parents build a deck while growing up in Lodi, or just putting Legos together.

“Legos were the jam,” Dean says. “Every Christmas, every birthday: Legos.”

Now in his ninth year in Sacramento, Dean studied environmental studies briefly at Chico State before dropping out. Five years ago, he realized he needed something different. Specifically, he needed a coat rack. He’d moved back in with his dad, and the place was short on storage space. So he looked up a pattern online, bought some steel pipe and wood and started a DIY project. When it was finished, he thought, “I made something. It’s functional.” People who saw it liked it, and began asking him to make them their own coat racks.

“I thought, this is kinda cool,” he says.

Dean began trying to create more unique coat racks without using the internet as his guide. He soon realized just using wood and steel pipes was too limiting. He needed to learn skills like woodworking and metalworking.

“That’s how I found Hacker Lab,” he explains.

He began taking classes at the 17th and I coworking/making space.

“I gotta be a part of this place,” Dean told himself. “It’s got everything I need. It’s got all the people who know all the things I need to know.”

Not long after joining Hacker Lab, Dean moved in to the Warehouse Artist Lofts, a mixed-income artist community in the R Street District.

“It was my first time living in any kind of community,” Dean says.

Empowered by the neighborhood spirit and connections at WAL and Hacker Lab, he was able to gain the confidence, drive and support he needed to become a designer and start his own company.

Dean began to take on projects, doing work for local bars, hotels and restaurants like Cannon in East Sacramento, where he worked with Clay Nutting, Emily Wilder and Alex McDonald to create the restaurant’s interior. He built them two 10-foot tables as well as several booths and stools.

“That’s the direction I wanna go in,” Dean says. “‘Hey, we’re opening a restaurant and we need chairs, can you make 20 of them?’ That’s what I want my business to be.”

It’s not easy work. Splinters happen at least twice a day, like bee stings to the beekeeper. Meanwhile, Dean’s signature item has migrated from coat racks to stools.

“They’re the only thing I can fit in my apartment,” Dean jokes. “There’s something cool about the versatility of a stool. Could be a plant stand, a table, an ottoman. To me, they’re the most versatile piece of furniture out there, and that’s why I make them.”

Dean may not have finished his environmental studies degree, but he continues to use his educational background in his current line of work. He sources his lumber from local lumber mills, and works with the Sacramento Tree Foundation and their new Urban Wood Rescue program, a grant-funded endeavor that takes urban trees that had to be cut down due to “disease, safety and pests” and “saves these trees from becoming trash by milling the wood into usable lumber,” according to the Sacramento Tree Foundation’s official website (Sactree.com).

A few years into this work, Dean soon found his career beginning to merge with the art world. He’d gotten involved with Portal, his first public art project. That effort, along with making a home at WAL (in close proximity to 1810 Gallery and M5 Arts), had plugged him into a community of artists. He created a piece for Art Hotel and another for ArtStreet.

“Those projects were like summer camp for artists,” says Dean. “You’re there for a month building it all out. You’re hanging out and seeing everyone every day, and then everyone goes their separate ways. And then a year later you see everyone again and go, ‘Hey, we’re all friends again!’”

One of those friends, Dan Tran, had a great idea. Tran also worked at Hacker Lab, where Dean had started teaching welding classes and wood and metal shops. The pair found out about Sacramento’s Creative Economy grant program, and went in together to turn Dan’s concept into a project they’re calling Kaleidoscope, a natural butterfly habitat. The project’s first step is to plant vines, which will then grow using various sculptures that Tran and Dean have made as a trellis. Over the course of the next few years, the vines will grow large enough to support a California pipevine swallowtail butterfly colony. They’ll also install nectar plants and wildflowers and are working with the Sacramento Tree Foundation to plant native trees in order to provide extra shade for the vines. With the grant approved and plans in place, Tran and Dean now only await checks from the city, and will install the habitat at Southside Park by the end of the summer.

Building mode and art mode can be difficult to maintain at the same time, Dean allows. He’s spent the past 18 months working with West Elm Furniture through their LOCAL program, which supports artisans neighboring their stores.

“It’s one situation where being in Sacramento really helped me,” he points out.

No one else in Sacramento had applied, according to Dean, which likely got him a closer look. After getting accepted, Dean created one small piece, which ended up selling 75 units all across California.

“When I first started, I just thought it would be in Roseville,” Dean concedes.

It’s important to Dean not to put all his eggs in the Sacramento basket, and this is a bridge toward breaking out of the local market.

“There’s a number of reasons why Sacramento is awesome,” he says. “It doesn’t have to be the city that purchases all my work, it can just be the city where I get to create all my work. I want to live here and work here, but also sell outside of here.”

To that end, Dean recently embarked on a cross-country trip to take in New York Design Week. There, he was able to explore new ideas and get a sense of what he needed to bring to the table—besides just a table. But the trip also served to inform the next step in his career: the transition from maker to designer.

“I’m interested in blurring the lines between art and furniture,” says Dean. “To create work that’s so unique that people stop asking me ‘Can you make this table?’ And start saying, ‘We want you to design our stuff because we like your style.’ To achieve that, I need to have an image that is unique and recognizable. Create the brand.”

Dean’s goal for next year is to take his new collection to a show outside of Sacramento. It can be difficult to break in to larger markets, especially as an outsider.

“A lot of people I meet that got their start here, when they go to bigger cities, they always say, ‘Oh, I’m from San Francisco,’” he says. “That’s not what I’m interested in saying. I’m trying to rep Sacramento and show that this is a great place to live and work.”

To make that next leap, all Dean needs is a seat at the table. Fortunately, he can always make one himself.

You can check out some of Trent Dean’s wares at the upcoming R Street Get Down on June 16 at the 1400 block of R Street in Sacramento. For more info, go to Rstreetcorridor.com. On June 23, you can also see Dean’s work at the Our Street Night Market, taking place on R Street in between 11th and 12th Streets. For more on that event, go to Facebook.com/ourstreetnightmarket.