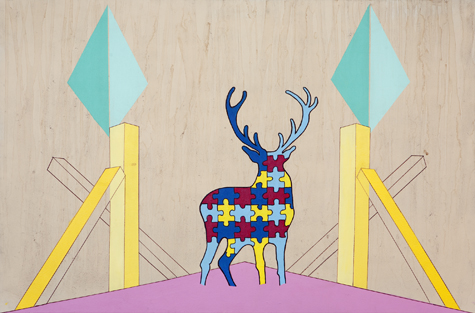 Trent Liddicoat Connects Art and Literature in His New Exhibit

Given the healthy abundance of trees and recent infestation of raccoons and opossums, Midtown is in a delicate balance of the natural functioning alongside an urban civilization built atop it. Local artist Trent Liddicoat is plugged into the duality of Midtown, finding a sense of his inner struggle in it. He wrestles with these struggles and the stresses placed upon communities in death in his art show at Sol Collective.

Titled …and I’m whistling as beautifully as I can, Liddicoat’s work is predominantly conceived with the use of acrylics, coffee and spray paint. Dissatisfied with wine spills, he got the inspiration to use coffee after seeing a fellow artist Richard St. Ofle use the dark brew on canvas. Before Liddicoat, age 23, would head out for work in the mornings, he splashed the remains of his morning French press across the canvas to dry throughout the afternoon. In time he was able to manipulate the spills to his liking. “It’s cheap,” he said. “At first it was very intimidating, but now I’ve got a few techniques.”

The show title’s full quote, first penned by the late (so it goes) Kurt Vonnegut, is “All the other species are dying and so will we. I’m whistling as I walk past the graveyard…whistling as beautifully as I can.” Liddicoat wrote the quote in a journal years ago. While seeking a muse to direct his body of work, he rediscovered the saved prose. “I read that and was thinking how it was connected with being a new artist,” he said. “I don’t have an education with my art, so I’m taking this full force to be an honest portrayal of the best that I can do.”

The words relate to Liddicoat’s perception of death as well–a prevalent theme in his collection. He said the show is not a focus on death, but life’s curtain call acted as the steppingstone of inspiration for the series. “I wanted to find the positive light in it,” he said. “A friend pointed out once, that rather than focusing on the grieving, I’m focusing on the tail end of life. So now the show is more about life and experience. ” 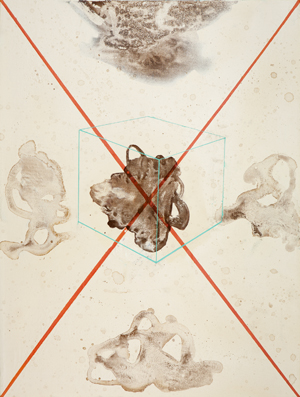 Death as an adhesive for communities might be too pretty of a bow for Liddicoat’s intention, but with death as the foundation, it kept inspiring friends to offer their insights to his work. A few of his paintings feature images of deer, one of which was donated to the UC Davis Mind Institute for Autism Research. There are a number of reasons Liddicoat could have selected deer to unite his work, but it would be his small community of artists that guided him. “My friend Estella [Sanchez] from the Sol Collective actually pointed out to me that the deer is a symbol of death in Mayan culture,” he said.

A native of Rio Linda, Liddicoat is no stranger to the outdoors and its wildlife. He said his grandparents once owned acres of land. It is that upbringing pitted against his adjustment to urban living that seeps into his art. “I try to take the personal problems that I have or the issues with certain things and I think about something conceptually and then find a way to make it universal for others. That led me to the idea of how a sense of community helps loss.”

For Liddicoat, the task of internalizing is far deeper than the chore of conceptualizing. He offered a brief mention of a family situation concerning his grandfather’s health–a topic that felt addressable strictly due to his valued interest in art focused on death. He began questioning how his grandfather’s current health issues would alter the mindsets and how the family will process the impending change.

The situation lacks answers until the threshold is met, but it is in those dire moments that bonds are strengthened. The young artist spoke graciously of his friends and pocket of fellow artists and musicians, all of which provide motivation for his art. Liddicoat’s art show will feature a 7-foot installation inspired by the Free Life Center, a touring art house that he admires. Jesse Phillips of Ellie Fortune helped Liddicoat with the homage installation, which is made from recycled wood taken from a long dormant house near his mom’s property in Rio Linda. “They moved out years ago,” he said. “Basically this wood was part of what looked like meth shacks. We just hopped the fence, pulled off all the materials and brought it to the Sol Collective.” Strong communities should also be resourceful. 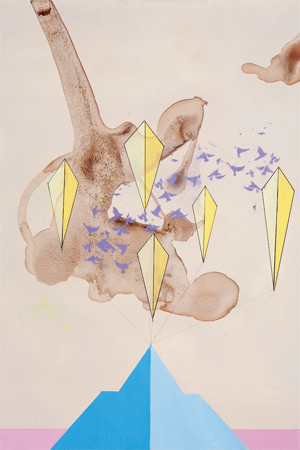 Trent Liddicoat’s …and I’m whistling as beautifully as I can can be viewed at the Sol Collective from Dec. 17, 2012 – Jan. 28, 2012. The closing reception will start at 7 p.m. and feature music performances from Fine Steps, Peggy Benks and Matthew Maxwell. For more info on Sol Collective, check out Solcollective.org. You can also follow Liddicoat on Tumblr at Trentliddicoatart.tumblr.com.