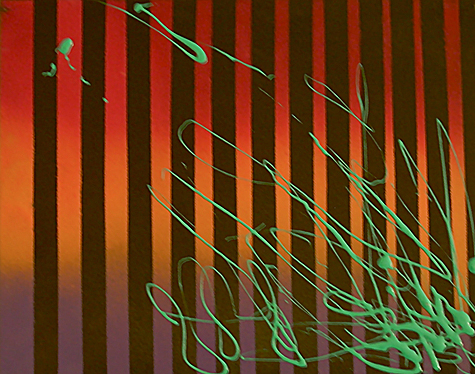 The Neon Mind of Vagas Hawk

Animal instinct, electronic fury and a plethora of neon—Vagas Hawk is no stranger to color. She may be a stranger to most, however, being that her two art shows (at newcomer Thunderhorse Vintage and Old Soul at the Weatherstone) on June 14 were her very first. Sixteen pieces of neon splattered canvas, humanistic portrayals of wolves and elephants and lengthy titles make up her first series, entitled Electric City. Inspired by her deep passion for ambient electronic music and love of animals, Electric City is a portal into nature’s futuristic realm.

Vagas Hawk (named after her grandfather) seems to have always been drawn to both electronic music and animals, citing her experiences with her mother and also her time while in high school as the pinnacles to her introduction to nature and music. 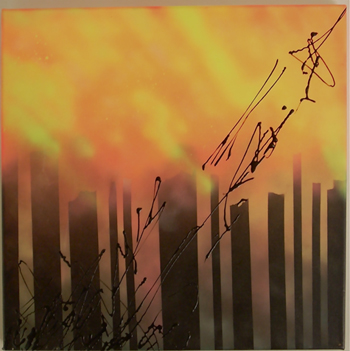 “My mother introduced me to nature by taking long walks with me,” Hawk says. “I think she helped develop my attention to nature because we would take walks and solely focus on the animals around us.”

At the age of 6, Hawk’s first sketches were of 10 horses because, as Hawk recalls, “I would watch my mother draw in this journal she had. She drew a lot of different things, mostly nature themed, so I know that her art was a huge influence on me back then.”

She continued drawing into her high school years, when she enrolled in Sacramento High School’s VAPAC art classes. Primarily focusing on portraits of friends, she remembers, “I was not really experimenting with color at all back then. I used mostly pens and pencils in black and white. I was still trying to feel comfortable with myself and with drawing.” 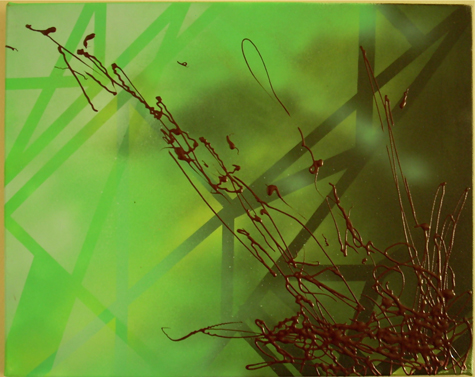 It was in high school where she discovered electronic music, a variable that would help Hawk find her comfort in creating.

“I had just found Portishead when I entered high school and I was listening to other types of electronic music as well, and I felt that that type of music really helped me find emotions that were real,” Hawk says. “I was able to put on my headphones and draw.”

After several years of traveling all over California, feeling “deprived of any cultural or art bond” from her previous residences (which included South Lake Tahoe, Chico and a brief stint in Pismo Beach), she decided to move back to Sacramento. She has been here for less than five months. In that time, Hawk has started creating art that most resembles her upbringing: chaotic urban mazes of color and depth. Her art harkens back to the ’80s, a time when neon windbreakers and New Kids on the Block were heralded. Hawk is a spray paint addict, adorning all her canvas works heavily with neon greens, oranges, pinks and blues, but her art is not what you’d expect from a spray can; it’s surprisingly precise, clean and even mathematical. Each piece is created “within a three-step process,” Hawk says.

“I use spray paint for the first step. I then use paint pens and acrylic for the last two steps.”

Electric City is intense, bold, and creative. It is fun, abrasive and a little crazy. It is work that represents her desire to create electronic music on canvas. Accordingly, Hawk admits that her art can be “a bit much at times. It normally is all over the place because I am influenced by so many different outlets. I love electronic music but I also love hip-hop. I love urban styles and Fresh Prince of Bel-Air.”